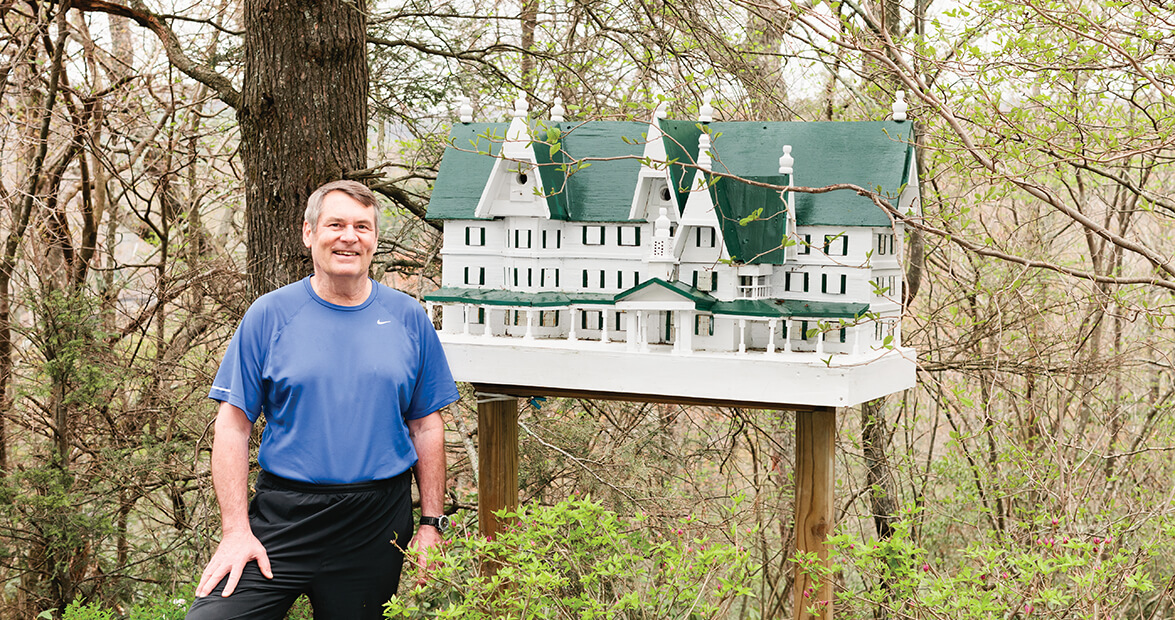 Fifteen years ago, Robert Glassgow and his wife, Patti, bought a cabin in Blowing Rock. After seeing birdhouses in the area modeled after buildings, Glassgow decided to make a birdhouse modeled after his own cabin.

Now as many as 20 of Glassgow’s unique birdhouse mansions in Blowing Rock line the cabin’s long driveway.

“One thing led to another, and they got more elaborate,” he says.

As a boy he loved making model cars and ships. His natural dexterity is part of what makes him good at his full-time job as a dentist. But in his free time, he still likes to build.

Glassgow constructs the birdhouses freehand, without mapping out a floor plan or calculating complex measurements. He works based on photographs of buildings he’s found in magazines or taken himself.

“At a distance [the birdhouses] look better than they do up close,” he says.

And after years of practice, they’re still improving.

“I used Elmer’s glue to start with,” Glassgow says. “Didn’t take long before it started to fall apart.”

Though he now knows the best supplies to use, he has to refurbish his birdhouses every three to four years. The weather in Blowing Rock can be harsh, so the birdhouses that surround his cabin need regular maintenance.

One or two birdhouses decorate his home in Salisbury, he says, but he keeps most of them at his cabin. He builds for his own enjoyment, and he’s never sold one.

“Never thought of it,” he says.

Glassgow doesn’t consider himself a bird-watcher. He says he can identify a cardinal, but that’s about it. He likes nature, but mostly he just likes to build.

His favorite model is of the 112-year-old Moses Cone Estate on the Blue Ridge Parkway. He likes the history and architecture of the manor.
The Glassgows’ friend Stephanie Carlson says the Moses Cone birdhouse is her favorite, too.

The birds in the area appreciate Glassgow’s work, too, as many of the birdhouses are happily occupied by their intended feathered residents.