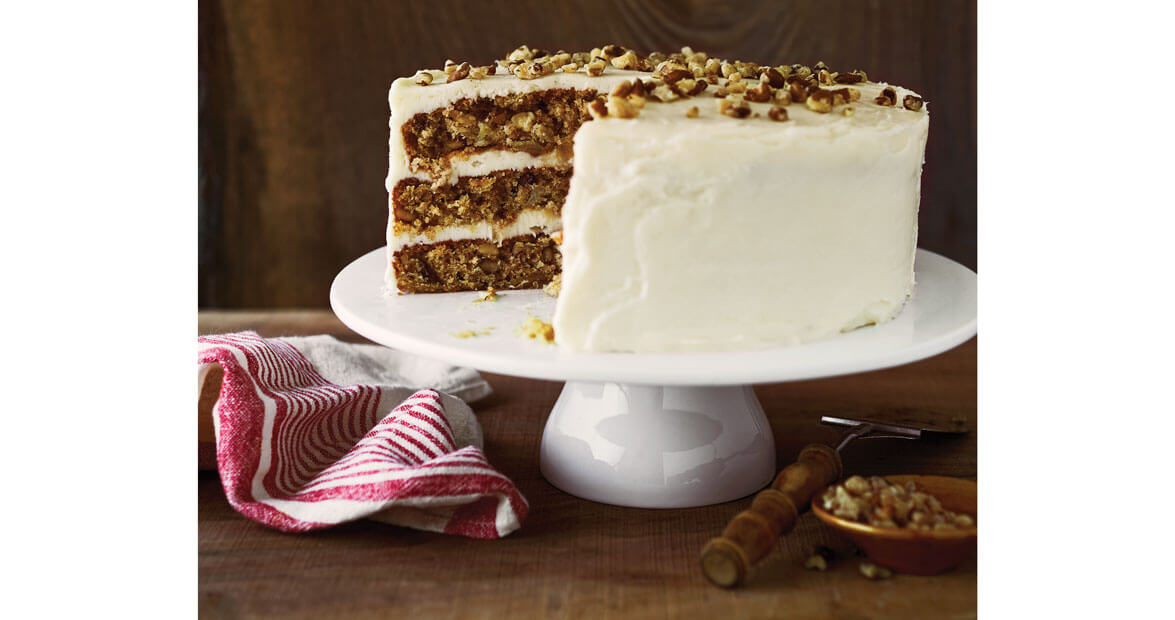 For the cake: Heat the oven to 350°. Grease (with shortening) and flour three 9-inch round cake pans.

Whisk together the flour, sugar, salt, baking soda, cinnamon, and nutmeg in a large bowl. Add the eggs and oil, and stir only until the dry ingredients disappear into the batter; do not beat. Stir in the vanilla, pineapple, walnuts, and bananas.
Divide the batter among the cake pans. Gently tap the pans on the counter to remove air bubbles.

Bake until a wooden pick inserted in center comes out clean, 25 to 30 minutes. Place the pans on wire racks to cool for 10 minutes. Turn out the layers and cool completely on the wire racks for 1 hour.

For the frosting: In a large bowl, beat the cream cheese and butter until smooth with an electric mixer at medium speed. Gradually add the powdered sugar, beating at low speed until light and fluffy. Quickly beat in the vanilla.

Spread 1 cup of frosting between the cake layers, stacking them as you go. (For the most attractive layer cake, place the first cake layer bottom-side up and place the final cake layer top-side up.) Spread the remaining frosting over the top and around the sides of the cake. Pat the walnuts over the top. Store refrigerated in an airtight cake carrier.

Tip: The bananas are diced, not mashed. For the best texture and flavor, use ripe bananas that are evenly freckled with brown spots.

Read more about this cake:
Hummingbird Cake quickly became a Southern classic after it appeared in Southern Living in 1978, submitted by Mrs. L.H. Wiggins of Greensboro. Unlike most fancy layer cakes, the batter is stirred together in one bowl, with no need for an electric mixer. Although the many recipes for Hummingbird Cake are remarkably similar, a few tweaks won’t wreck it. Some bakers add a little coconut. Others add a pinch more spice. Some call for self-rising flour. In this version, the traditional pecans are replaced by black walnuts.

The origin of the cake’s charming name has puzzled many a home cook. Some say it’s as sweet as hummingbird nectar. The likeliest theory is that a precursor to this fruity cake originated in Jamaica, where a hummingbird is a national symbol. It didn’t take long before visitors from America clamored for the recipe. Jamaicans obliged, and the recipe was included in press kits to promote tourism. Bananas and pineapples may not be North Carolina natives, but we’ve given our version a local, seasonal twist (and a new name) with black walnuts.