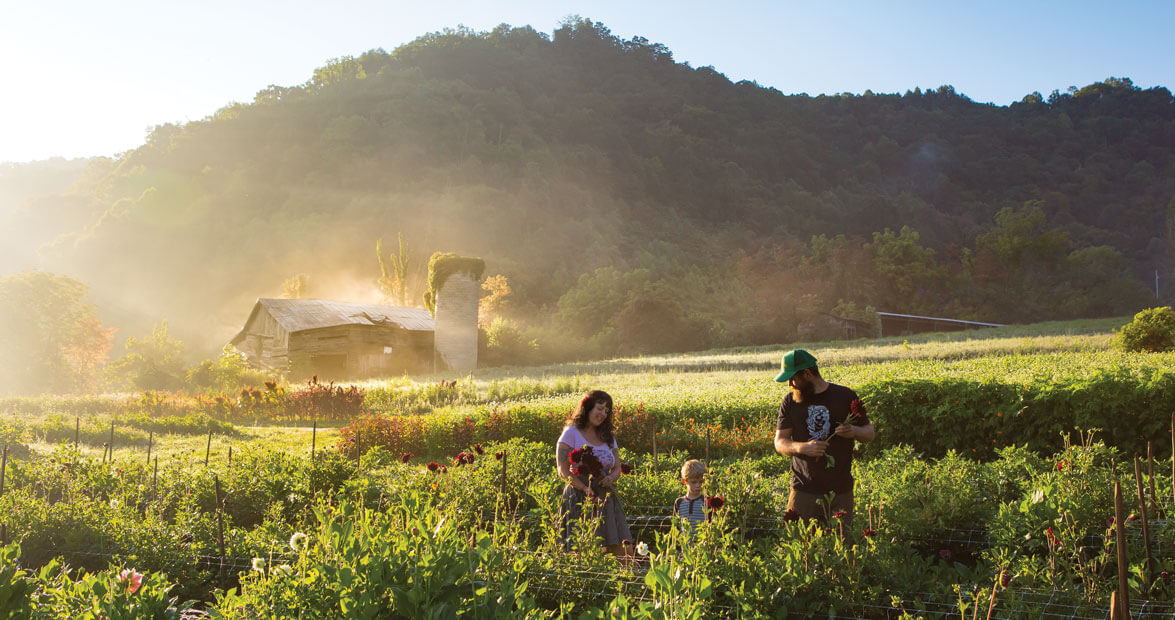 Something clicked for Katie Grear when she attended herbal medicine school in Weaverville. She’d grown up in nearby Asheville, where her father taught her to love and appreciate nature. Classroom hikes and explorations deepened that passion.

Now, on 10 rolling acres of their farm in the Big Sandy Mush Valley, Katie and her husband, Mike Adams, grow a wide variety of flowers, including dahlias, tulips, and peonies, with a special emphasis on beautiful plants that also provide food or medicine, like lavender and echinacea. 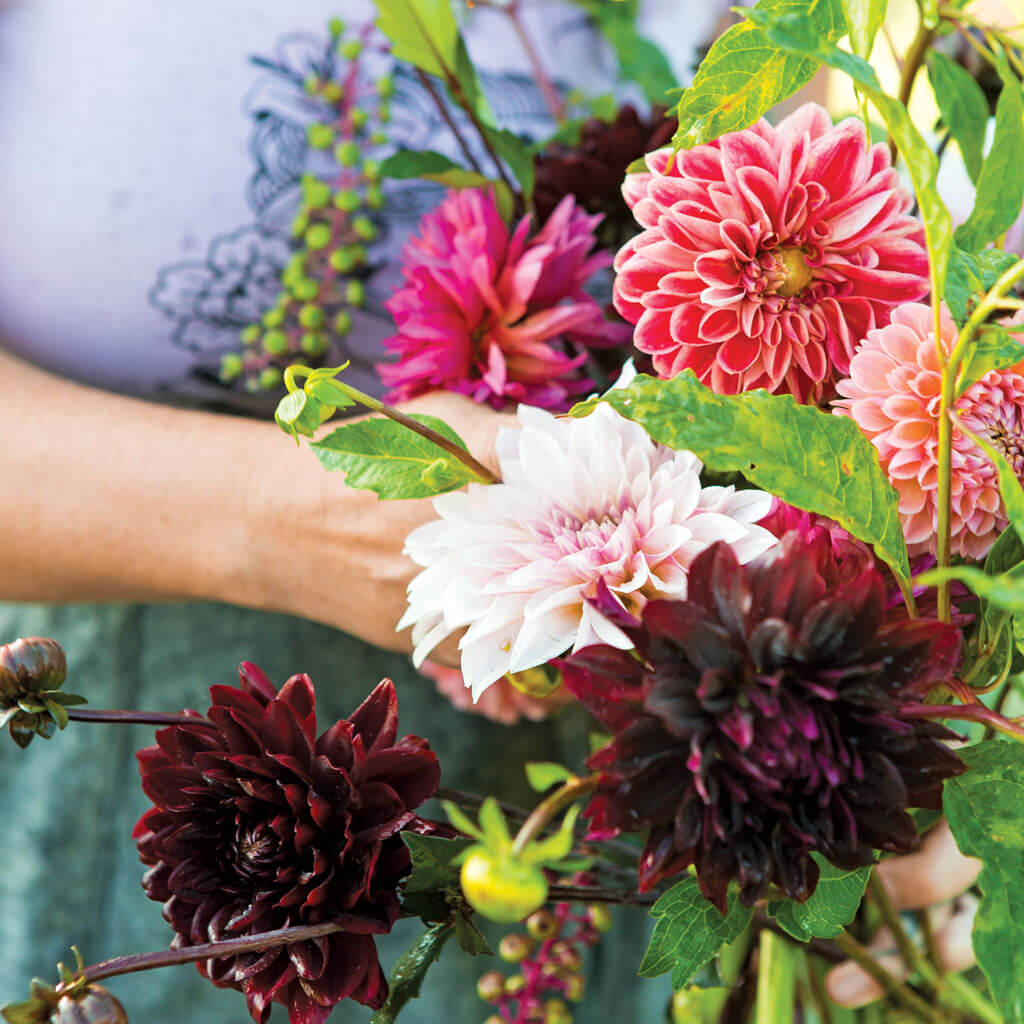 Like Katie, Mike has a passion for plants. He once interned with a ginseng grower in Madison County and used to own a landscaping business. Together, they’re raising 5-year-old Garnet to appreciate nature, too. “He loves to get dirty. He takes great delight in plowing the rows,” Mike says. “That’s another joy, getting to see him grow up in this place.” photograph by Tim Robison

“We’re big believers in being in nature, and nature’s ability to soothe and heal,” Katie says. “Bringing people to the farm and into nature is the most fun aspect.” Following that philosophy, Mike and Katie host workshops, farm dinners, and several community picking days throughout the season. Couples can also book “private pickings” and choose their own flowers in the days before their wedding. “The farm is a whole organism,” Mike says. “It all works together.”

At the entrance to Bill Brown and Carrie McCann’s property stands the giant boulder, draped in resurrection fern, that gives their farm its name. From there, the driveway slopes gently toward Bill and Carrie’s home, past a pond and rows of raised beds filled with classic Southern flowers: larkspur and daffodils, sunflowers and gladioli — and hundreds of dahlias, Carrie’s favorite for their wide variety of shapes and colors. (At the State Fair last year, her dahlias won 15 blue ribbons.) The couple didn’t plan to become flower farmers. 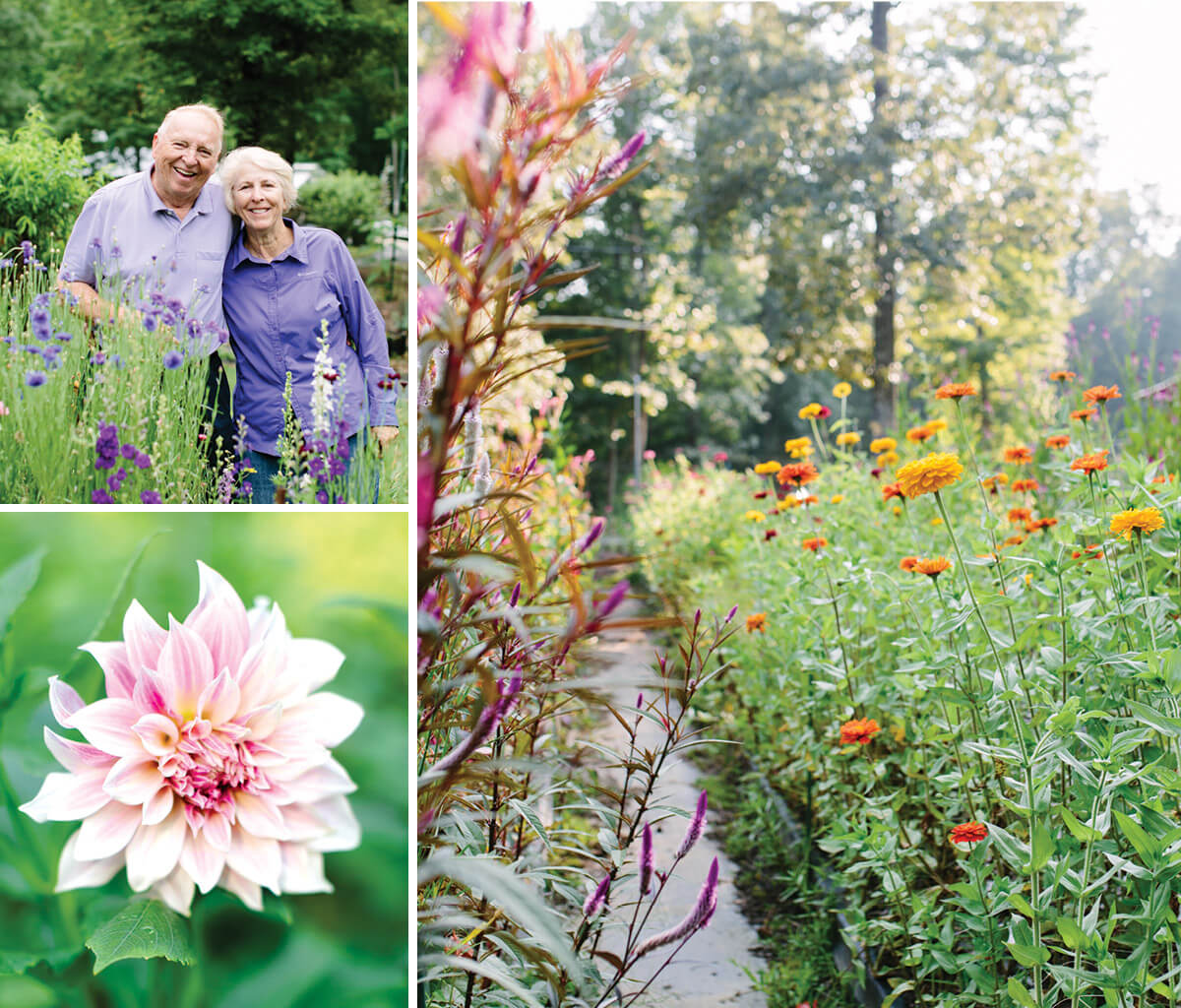 Carrie started growing and arranging flowers for weddings when a neighbor’s daughter got married. She sells flowers to customers at the Carrboro Farmers Market, and to florists and event planners through Piedmont Wholesale Flowers. “All of us want people to buy more local flowers,” she says. “There’s room for them all to be sold.” photograph by Anagram Photo

Growing up, Carrie watched her father tend beans, corn, and peas in the family’s Greensboro backyard. For years, she planted flowers simply because she liked them. After she and Bill retired a decade ago, they gradually grew more and more until they decided, “Let’s sell them!” Neither had a background in farming. But they’ve figured it out together. “Carrie’s had no training in this — she’s learned from all the mistakes we’ve made,” Bill says. “She’s a pretty smart cookie. I’m proud of that.”

It’s quiet out on Michael and Daphne O’Brien’s farm in Edgecombe County — land that’s been in Michael’s family for eight generations now. Years ago, when the couple lived and worked in Raleigh, they’d visit Michael’s grandparents at the family’s 1826 farmhouse most weekends. “All my life, I’ve loved this place,” Michael says, “and I always wanted to come live here.” Twenty-five years ago, they did.

His grandfather farmed traditional row crops — corn, peanuts, soybeans, cotton, and tobacco — never cut flowers, though he always had a vegetable garden with several rows of flowers for his wife, who loved them. But the first time that the O’Briens brought Mason jars filled with zinnias to the farmers market, they saw that the demand for flowers was strong. 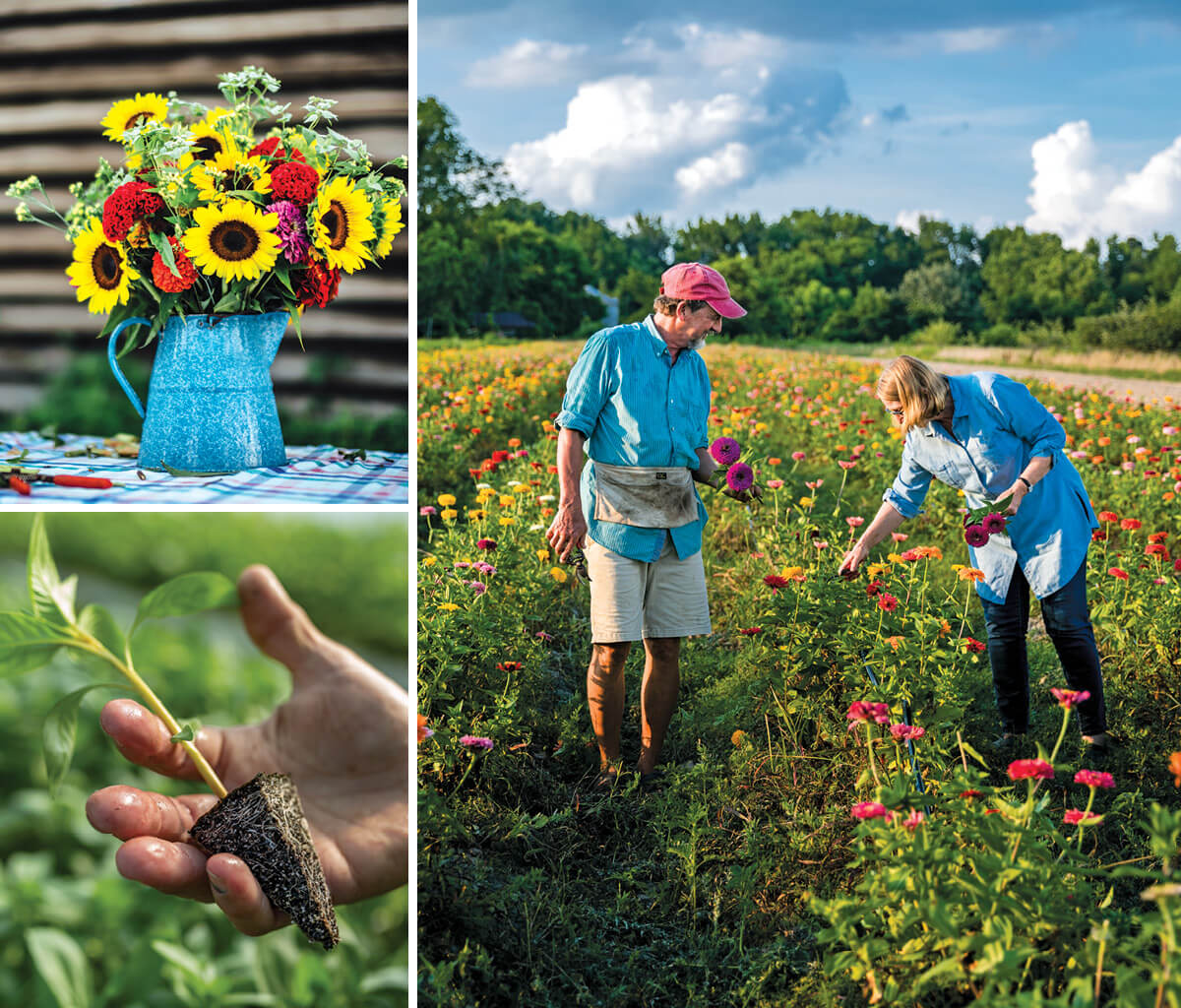 Flower farming is hard work, between heat and harsh winters, weeds and animal intruders. But for a former professional photographer like Michael, being surrounded by so much color and beauty under a wide, blue sky is irresistible. “I’m out here every day,” he says, “so I see every rainbow. I see every sunset. It’s very fulfilling.” photograph by Charles Harris

On Saturdays at the Rocky Mount Farmers Market, their signature offering is Daphne’s “make-me-one” (above), mixed bouquets of sunflowers, tulips, irises — whatever’s blooming at the time — named for the eager responses to the email newsletter that Michael sends each week: “Make me one!”

Flowers have been a Van Staalduinen tradition for generations — first in the Netherlands and then, after the family relocated during World War II, in North Carolina. Beaufort County held great promise for Leendert and Cornelia Van Staalduinen: The combination of soil and climate was perfect for Easter-blooming tulips, and there was already a Dutch settlement, Terra Ceia.

In 1943, Leendert bought some land and got to work. Most of his tulips and gladioli headed north, loaded into ice-cooled train cars bound for Boston, New York, and Washington, D.C. In 1950, he got an idea. Bulbs were arriving by the trainload from the Netherlands. Why not sell those, too? 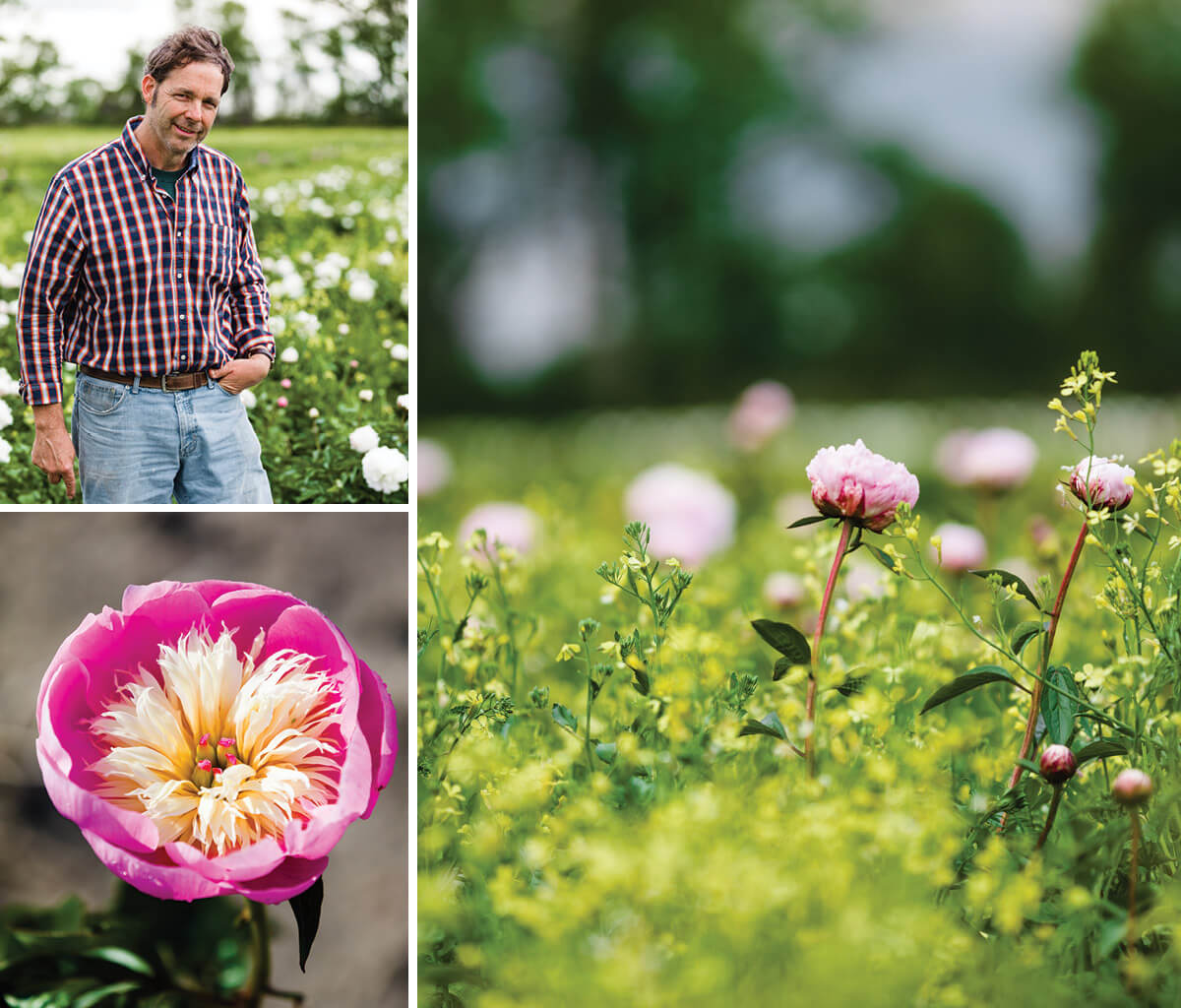 When Mark Van Staalduinen (left) and his brothers took over Terra Ceia in the ’90s, he oversaw acres of grain on the farm. After Mark opened Spoon River restaurant in Belhaven, the brothers decided to let go of the grain operation. But lush peonies from Terra Ceia have become a signature of Spoon River’s dining room. photograph by Baxter Miller

His bulb catalog started small — just an 8½-by-11-inch sheet of paper — but later, while recovering from a farming accident, he had time to build his mail-order business. Three of his grandsons — Casey, Carl, and Mark — continue to sell cannas, daylilies, amaryllis, and other bulbs and root plants, fulfilling the promise of the farm’s name: “heavenly earth.”

The peonies started with Leendert. As he established his farm in Pantego, he experimented with planting new kinds of flowers for his customers. Over the years, as the mail-order side of the business grew, the cut-flower side diminished, but Carl and his brothers wanted at least one crop that was sure to be profitable. 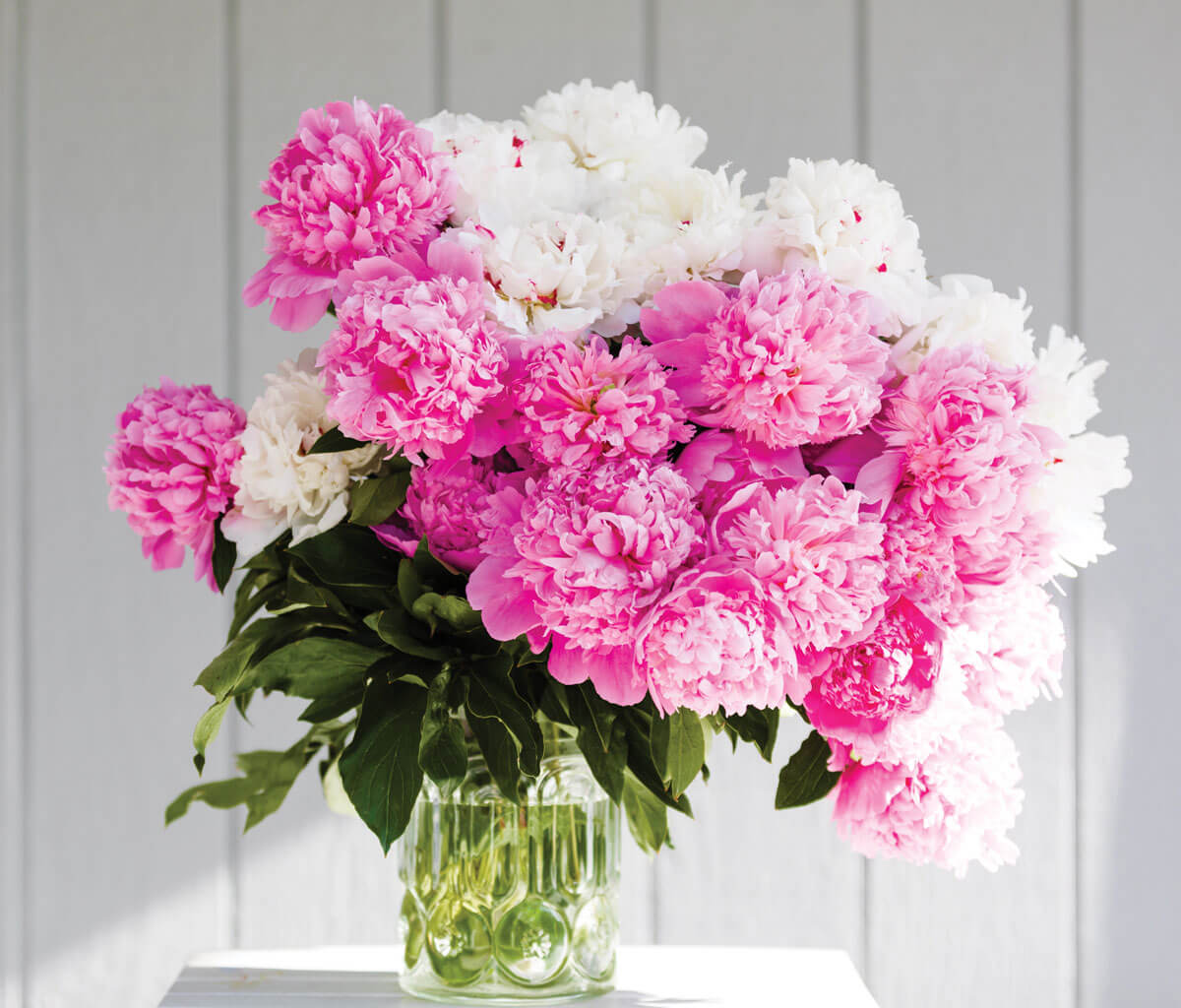 Peony plants take up to five years to establish a root system, but their showy, fragrant blooms are so worth the wait. And they’ve been known to live for 100 years or more — so the peonies your grandma once tended are a gift that keeps giving, spring after spring. photograph by Baxter Miller

They understood that peonies — hard to grow and highly nostalgic — held a certain magic for many people. As a result, Leendert’s five acres of peonies have turned into 150 acres, a process that has taken time and patience: Like fruit trees, peonies take years to establish a root system that will support their heavy blooms.

Plus, Carl says, “you can’t fake winter.” Where other flowers are happy to bask in the warmth of a greenhouse, peonies require a spell of cold weather, so they’re only available for a few months out of the year. “They’re something special when you see them,” Carl says, “especially the first of the season.”