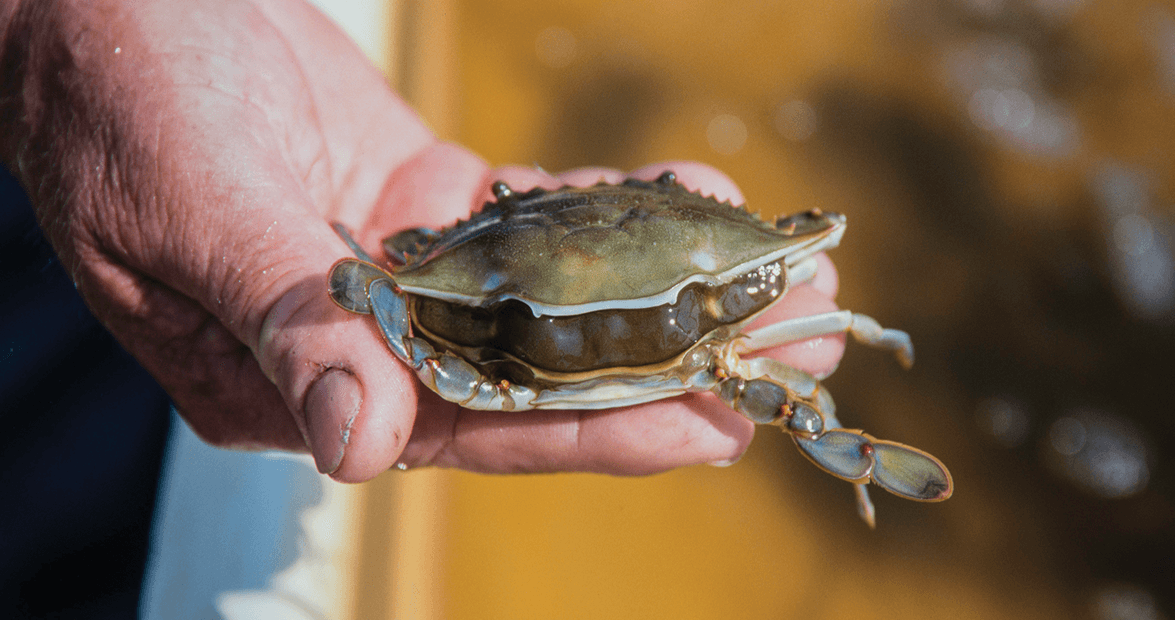 All along North Carolina’s coast, in small towns like Kill Devil Hills, Swan Quarter, and Engelhard, blue crabs bubble peaceably in long, shallow bathtubs. They gently wave their pincers at other crabs in their tanks, waiting for the full moon, holding a secret beneath their carapaces.

“If you look at the back of a blue crab, you’ll see a dim figure of a woman,” says retired Engelhard fisherman Marco Gibbs. “When the moon changes, she’ll take off her dress and you can see everything.”

Fishermen treasure these naked women as valuable assets to North Carolina’s $73 million fishing industry. When the ladies remove their dresses, the crustaceans become the soft crabs enjoyed by gourmands across the globe.

Blue crabs shed their small, tight shells to grow and mate. Fishermen collect the crabs in their more rigid form from open waters and place them in tanks in anticipation of the shed. They call these crabs “peelers” because they peel out of their thick armor, revealing a new soft, tender skin beneath. Without those tough helmets and hard, pinchy claws, the crabs are left defenseless and delicious.

No one knows for sure why blue crabs shed in greater numbers around the changes of the moon, but North Carolina fishermen often use lunar calendars to predict when they’ll have the largest haul.

“Everybody says crabs shed when the moon changes, but water temperature also has a lot to do with it,” says Dell Newman, owner of Newman’s Seafood in Swan Quarter. “Even so, I use a calendar with the moon phases on it to help me predict the shed.”

North Carolina fishermen often first encounter the patterns of the natural world without the outside aid of books or research. Through their work, they come to know the moon’s push and tug on our waters, the fishes writhing in their nets across the seasons, and the tender face of a nude woman peering at them from wire crab pots under a full moon.

“I noticed on my own that I was hauling more soft crabs around the full and new moon when I started fishing over 50 years ago,” Gibbs says.

Gibbs believes the mass shedding with the moon changes is just another part of nature. “You know, everything in nature is controlled by the moon,” he says.

Kill Devil Hills commercial fisherman Murray Bridges puts a finer point on Gibbs’s premise. “What I think, in the nature of everything, is that it seems like the full moon is when every animal mates,” he says. “When these crabs are molting, they’re making love. That’s the way it is.”

The scientific name for the blue crab is Callinectes sapidus, its genus meaning “beautiful swimmer.” A few other words in the colorful language of blue crabs caught our eye.

The crab’s abdomen, under which female crabs carry their eggs.

A crab in the final stage of molting, on the verge of revealing itself as a soft crab.

An immature female crab, also known as a she-crab.

One of a number of names — including snowball, water gall, windjammer, or white belly — for a recently molted crab that has not yet fattened up.