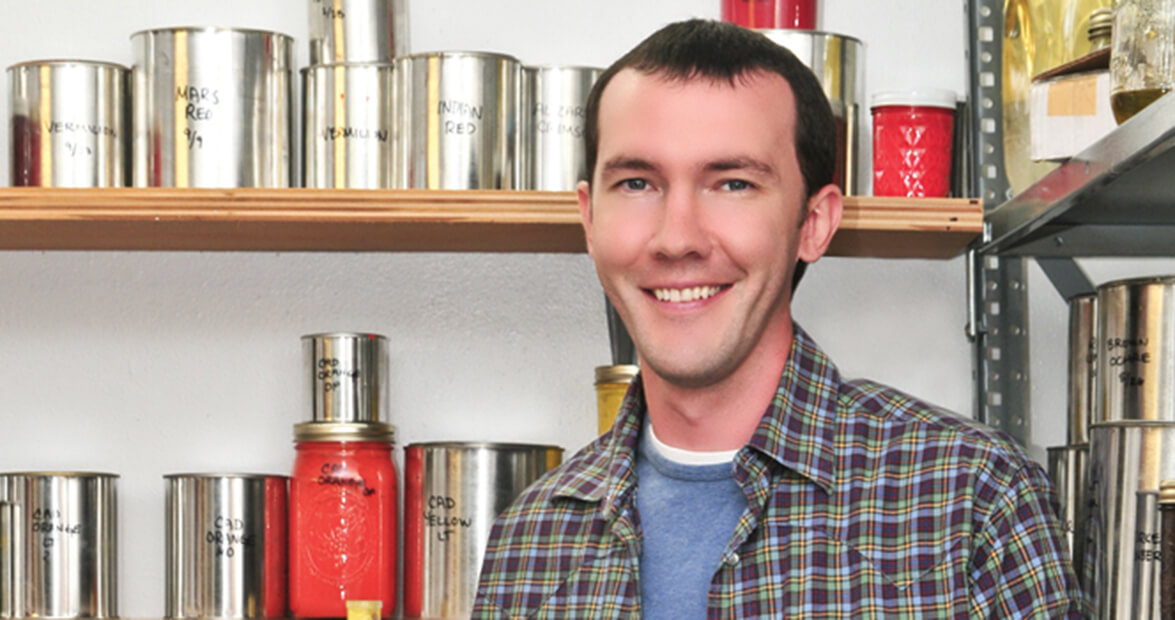 By the time the bright yellow powder and oil mixture flows through the rollers and down the chute of the spattered mill, Eric Silver’s custom-created paint has been blended to the consistency of cake frosting. Silver spreads some of the paste on a knife, dips in a finger and rubs it on a white panel to check the color clarity and tinting qualities and to gauge how the paint will feel under the eager bristles of a brush.

Silver puts the mill through the motions daily to create a dazzling palette with shades of orange, red, green, blue, violet, brown, black. “When you do colors like this, it feeds the soul. It’s kind of emotional. I feel there’s a little piece of me in every color I make. It’s just like a painting,” he says.

Consider it art for artists. With his Asheville-based Blue Ridge Artist Materials, which produces oil paints and mediums for artists, Silver is one of many people in the region who make the supplies behind the demand. And the demand is big. The annual economic impact of the professional arts and craft industry in western North Carolina was estimated at $206.5 million in 2007, according to a recent study. Craft artists accounted for about $86 million of the total amount, and craft suppliers and publishers generate $15 million.

Among the businesses that provide materials in Asheville are a clay manufacturer and companies that make and sell art papers and bookbinding materials, glass blowing equipment and supplies for woodworking, papermaking, basketry, leatherwork, and other crafts.

“It’s really convenient to have local suppliers here, to actually be able to select and pick up what you want,” says Geraldine Plato, executive director of HandMade in America, a regional nonprofit organization that promotes crafts for community and economic development. “It’s more than just selling an object to a craft artist. It’s knowing who they are and understanding their lifestyle. I think there’s more respect for the artist by the supplier. The craft artists I know would probably support local before they made a deal with a supplier in another area.”

Painter Fleta Monaghan of Asheville prefers to buy from people she knows personally, both for the local connection and reasonable prices. “Getting a locally made product compared with something made in China, there’s just no comparison.”

Some suppliers, including Silver, believe they’re unique in the state. With only a handful of artists’ oil paint producers in the country, Silver’s business is fueled partly by painters who want purity in materials as they turn to the classical techniques and colors of such masters as Rembrandt.

Silver, 30, opened his business several years ago. He started by hand-grinding pigments for 12 colors and now offers about 75 colors. Silver weighs the pigment and oil — linseed, walnut, or safflower — on a scale according to his recipes for each hue. Then he mixes the ingredients in a worn dough blender and mills the paint, which goes into tubes and cans. By blending tree resins with turpentine and oil, Silver also makes the mediums that some artists mix with paint to change the consistency.

His shop has the feel of a laboratory, with beakers, bins of rocklike resins, and jars and bottles with varnishes, pale yellow and golden oils, and murky fluids. In a corner, there’s a cluster of 55-gallon drums of oil. “It’s just trial and error. Weigh it out, mix it up, test it, and take notes,” says Silver, who continues to create new colors. “It’s tricky getting the formulas right, their pigment load, the color, the clarity. I feel like a mad scientist. But just like with anything else, you can’t be scared to fail.”

In addition to modern colors, Silver makes historical colors from centuries ago. “A lot of people really want to have the authentic stuff that was used by these masters,” he says. His historical pigments include lead-tin yellow and smalt, a blue Silver says Rembrandt used.

Pigments for Silver’s historical colors come from England. He buys some mined pigments, including burnt umber and raw sienna from Georgia, and yellow ocher and sienna from Italy and France. His other pigments are synthetic.

Silver’s love of painting led him to make paint. At Western Carolina University, where he earned a degree in painting and drawing, Silver learned about a paint maker in New York, with whom he later apprenticed. “Growing up, I always took things apart to see how they worked. So naturally, I wanted to know what’s in paints to make my painting better,” he says.

Some of Silver’s customers, most of whom are professional artists around the world, say his paints help make their paintings better.

A penchant for violet

Painter Joyce Cambron usually prefers opaque earth colors — shades of red, sienna, umber, and ocher. But after she saw Silver’s cobalt violet, she couldn’t resist. “I started immediately using a lot of violet, which I had never used before. It’s a really pretty color. To use something that’s very transparent and delicate for me is a very interesting change,” Cambron says.

Monaghan and some of her art students use Silver’s hues exclusively. The highly pigmented paints have more intense color. “Eric is an artist, and he’s got a love of the materials. There’s an artisanship to it. Oil paint can be a fickle medium for the artist to use correctly,” she says.

Silver knows paint’s fickleness as well as he knows the peacefulness of painting. When he’s not making paint, he makes paintings. “When you’re a painter, you just have to do it. It’s a release,” he says.

So is creating paint — not too stiff, not too oily, with plenty of pigment. “The feeling I have when I paint is the feeling I get every day when I make good paint. It’s like a high,” Silver says.

So he continues a tradition — coating his palette knife with paint from the mill, rubbing the color to see its richness and, finally, feeling the paint gliding under a brush as it strokes a plain canvas that waits to be transformed.