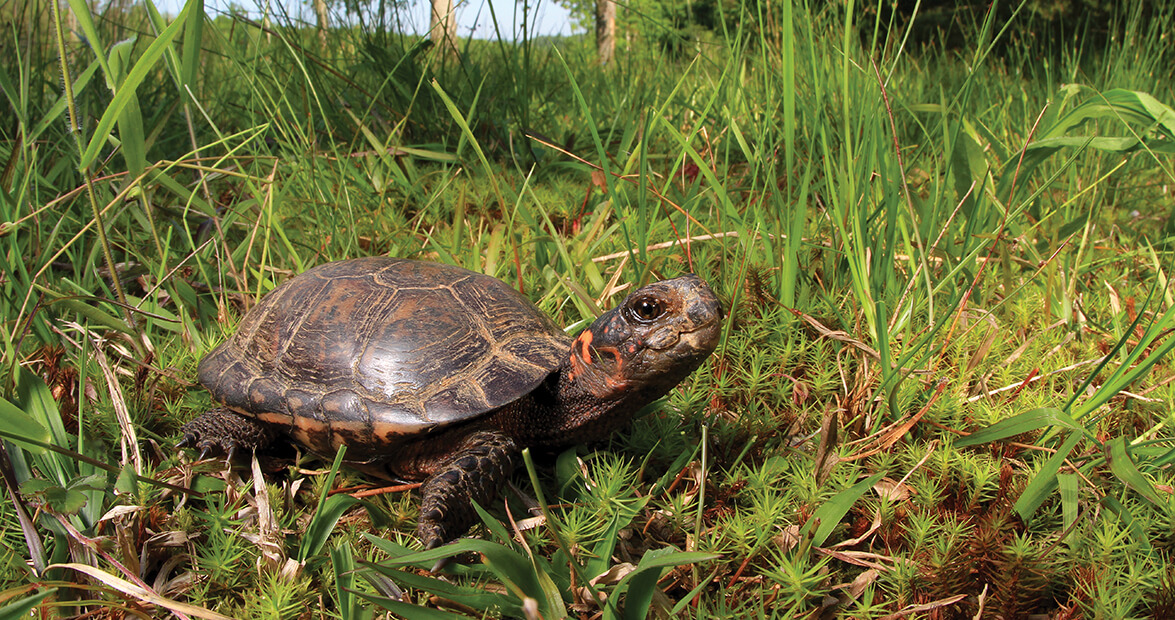 It’s no surprise that they live in the secret places, the overlooked spots, little mountain seeps and fens too steep to plow, too wet to walk across without the aid of tall boots and a stout stick. It’s a world unto its own in there, beyond the shady canopies of hemlock and white pine and gnarled rhododendron, under the reeds and sedges that sprout from dense mats of sphagnum moss braided with narrow creeks. A mountain bog is a tiny sliver of the Pleistocene, a trove of the rare and the forgotten. And that’s where you might find them: tiny reptiles living tiny lives in the tiniest of wild places left in the Appalachian Highlands.

What makes a turtle smile? Basking in the sun in a quiet mountain bog in Wilkes County — bog turtle paradise.

Rarely does a bog turtle crack the four-inch mark. The smallest turtle species known in North America — and the second-smallest in the world — bog turtles are scattered across high-elevation seeps from north Georgia to the Northeast, with a strong population hanging on in more than 20 western North Carolina counties. These are gentle habitats, suited to a gentle creature. Mountain bogs are rarely more than a couple of acres in size, tucked into creek bottoms that rarely flood. Tiny stream courses braid the bogs, a latticework through the moss mats. Pull on hip boots, and you could walk across a typical mountain bog in five minutes. A bog turtle might spend nearly a half-century in a fragile pocket of wilderness hardly larger than a football field.

But bogs are vanishing from the High Country. Less than 20 percent of the original Southern Appalachian mountain bogs remain, the rest having been swallowed by roads and homes. The beavers and fires that once maintained the open, sunny mountain bogs are now few and far between. In past years, rampant poaching for the wild pet trade whittled down the numbers of bog turtles. In the entire Southeast, there may be fewer than 6,000 remaining.

Still, it’s a pretty exciting time in the bog turtle world. In the heat of midsummer, the mahogany-hued creatures lay their tiny eggs on tussocks of moss and sedge above the waterline. All around, the bogs are buzzing — alder flycatchers in the willows, four-toed salamanders in the muck, meadow jumping mice on their kangaroo legs. Rare creatures all, bound to the bogs, hemmed in and hanging on in a world paved over and built up.

And happily, bog turtles have attracted an oversize share of attention on a national level. Last year, the U.S. Fish and Wildlife Service created the nation’s 563rd national wildlife refuge to protect and conserve the bog turtle’s habitat. It’s not your typical sprawling preserve. The Mountain Bogs National Wildlife Refuge could one day include dozens of small, scattered sites, purchased from willing landowners. Scientists already have identified 30 sites in 11 western North Carolina and two eastern Tennessee counties that fit the refuge bill. The Nature Conservancy donated a conservation easement on 39 acres in Ashe County to kick off the refuge project, which, one day, will include 23,478 acres.

It will take decades to piece together fragments of the Southern Appalachian past to create a safe future for the continent’s tiniest turtle. But bog by bog, one forgotten little mountain vale and spring seep at a time, that haven will come. And the bog turtle will have a better chance to hang on in its small, small world.