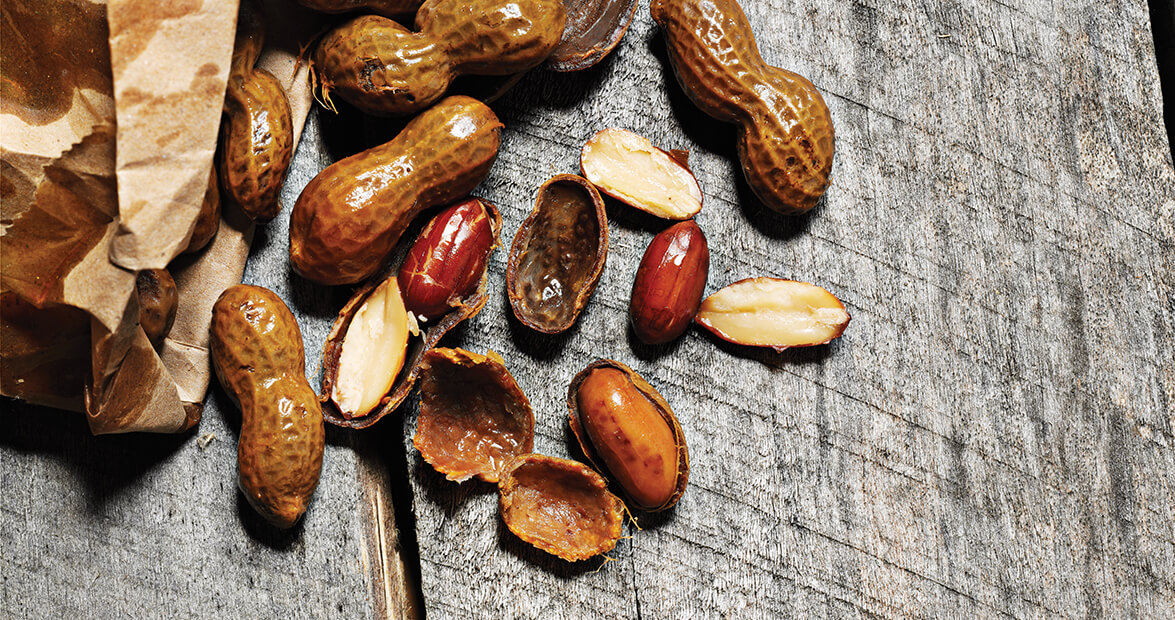 The Our State Great Debate: Which pit-stop snack are you picking: a pack of Nabs or a cup of boiled peanuts?

The “-ed” is silent in boiled peanuts. You know that, right? For those shuddering readers who consider boil’ peanuts a slimy ruination of a Southern staple, I’ll concede that boiled peanuts are an acquired taste. Moreover, they don’t look appealing in fancy-pants crystal or a silver bowl. And what to do with the shells? Even an olive pit can be discreetly spit into a napkin. No, the only thing to do is to eat them straight from the plastic bag or Styrofoam cup — if your boiled peanuts are dry enough for a paper bag, something’s wrong — standing at the sink where, with a high-functioning disposal, the shells can be decimated before anyone discovers how many you’ve managed to plow through, leaving no evidence in the trash.

Like many things (Bloody Marys after church, genealogy, centipede grass), I wasn’t introduced to boiled peanuts until I married an eastern North Carolinian. (He claims Fayetteville is the Sandhills, but whatever.) I’ve been an addict ever since.

Who doesn’t love the classless boil’ peanut, scarfed down by both arugula foodies and the chitlin’ crowd? This endlessly versatile, dun-colored legume with the texture of a pound cake sad streak works equally well as cocktail food, snack food, and, in the same category as cold pizza, breakfast food. Arguments can be made for both hot and cold boiled peanuts, served as a delectable side at an oyster roast, a barbecue, or in a salad, no differently than edamame. 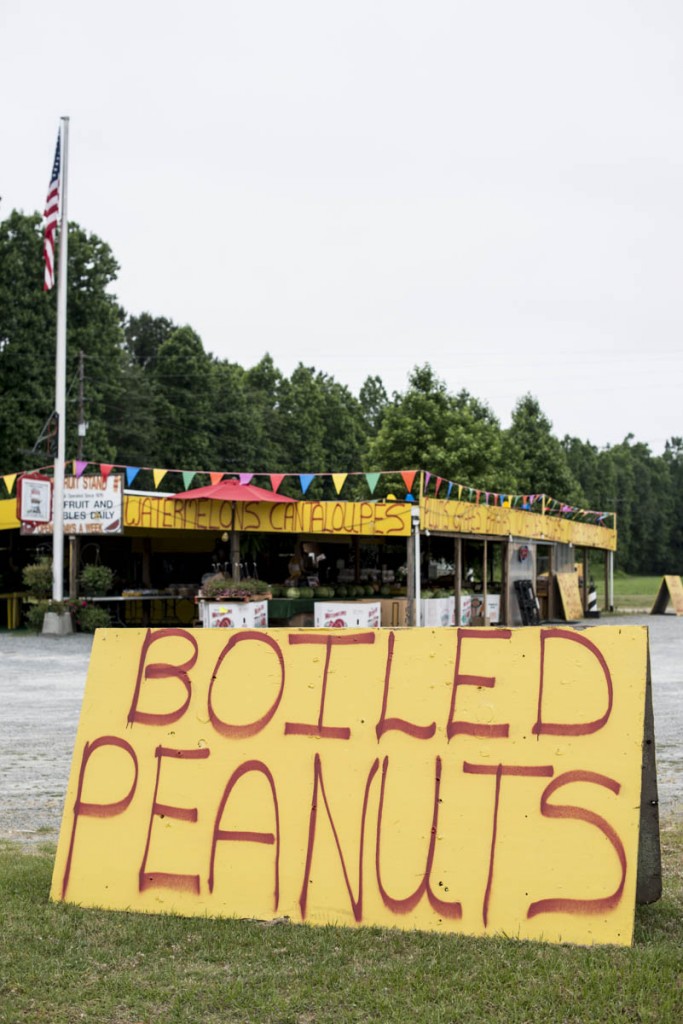 On your way to the beach, you’re bound to pass a boiled peanut stand like this one on U.S. Highway 70 in eastern North Carolina. photograph by Lissa Gotwals

I pull over whenever I see the hand-lettered sign BOIL P-NUTS. There they are, beside the sourwood honey in Cashiers, beside the chowchow in Rockingham, beside the Smithfield’s on the busiest lunch spot on I-40: Fuquay-Varina. Because — and I’ve buried this information in the middle because not only is it not politically correct, it’s bordering on illegal — the best way to eat boil’ peanuts is going 80 down 40. That’s 80 miles per hour going down Interstate 40. You steer with your wrists, which are slick and sticky from the salt water running down your fingers, and you can justify throwing the shells out the window because they’re biodegradable, and they turn into mulch a lot faster than an apple core. Well, let’s face it: They’re fairly close to mulch when you eat them.

No, the only problem with boil’ peanuts is that there’s no reliable source. A boil’ peanuts sign will pop up at a roadside stand, one that isn’t necessarily there the next time. Vendors appear to have no notion of supply-and-demand economics. I’m demanding them, and I can’t find a supply. My most recent source was a makeshift tent at Poplar Grove Plantation’s Wednesday farmers market on U.S. Highway 17 near Topsail Beach. A skinny, grizzled fellow whose shins were covered in tattoos dragged a flat, pierced ladle the size of a colander through a vat of soupy water resembling a swamp outside Whiteville that I speed by, because the swamp harbors my worst nightmares. The soup was even steaming slightly, like a prop for one of those Halloween haunted walks advertised on billboards beginning Labor Day. The irregular shapes of the peanuts floated like pale larvae. “Food for the gods,” I tell tattoo-man, and he says, “My son is in Afghanistan, and when he comes home, the first thing he wants is boil’ peanuts.” I cried all the way back to the cottage, where 14 of us waged a family feud over them.

Scarcity leads to desperate measures. Having a hankering, I searched out the Piedmont Triad Farmers Market. The only boil’ peanuts available there came from Georgia. “Can’t get a permit,” the vendor said. Ah. That explained the here-today-gone-tomorrow aspect of the goods. Did he ever make his own? I asked. He gazed placidly at me and answered, “Yes.” Was I going to have to do all the work here?

Next, I put out a Facebook APB. The responses varied, but none satisfied: “Want me to bring you some from Wilmington?” “You can get the raw ones at the Bessemer Curb Market.” “I believe someone was boiling them in Kirkwood last week …”

On to the North Carolina Department of Agriculture website, where, among the color-coded charts of  vegetables seasonably available at farmers markets, I instantly felt as though I was back in elementary school doing a project on imports and exports. Two products were represented with solid horizontal lines through spring, summer, fall, and winter: sweet potatoes and peanuts. All those peanuts, ubiquitous as Forrest Gump’s shrimp. Raw, dried, salted, roasted, mashed, fried. Peanut brittle, peanut butter. But what about … ? 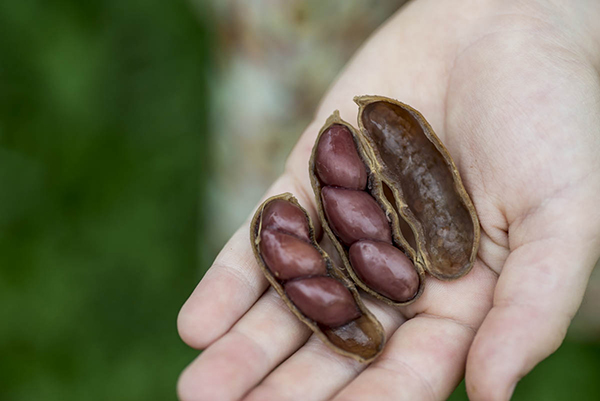 The best method to enjoy boiled peanuts? Eating them by the handful. photograph by Lissa Gotwals

Necessity, naturally, is the mother of invention. Out came the pasta pot, the Crock Pot, and a dozen bags of raw and green peanuts. What followed was two weeks of trial and error. I soaked the raw ones overnight and cooked on high eight hours. I soaked the green ones overnight and boiled for four hours. I didn’t soak and used Old Bay seasoning. I didn’t soak and used vinegar. I measured the salt perfectly. I randomly shook the shaker. I added water. I didn’t add water. And so on. A perfectly boiled peanut is all about texture. Achieving the proper degree of mush is critical, if highly subjective. Don’t talk to me about al dente; no soft is too soft. It’s also all about the salt, because in the same way a tomato sandwich is a vehicle for mayo, a boil’ peanut is a vehicle for salt. I chanted Imon burl me up some peanuts temarra. I stirred water that bore a strong resemblance to the substance passing as water in my neglected birdbath. I was tiresome; I burned a lot of scented candles. So, pay attention: Empty a bag of raw peanuts into a slow cooker, add water to the top, stir in a cup of salt, and cook on high for 24 hours. Freeze fine.

Recently, someone texted me from the grocery store, requesting my boiled peanut recipe. This, friends, is the ultimate accolade. I have arrived.