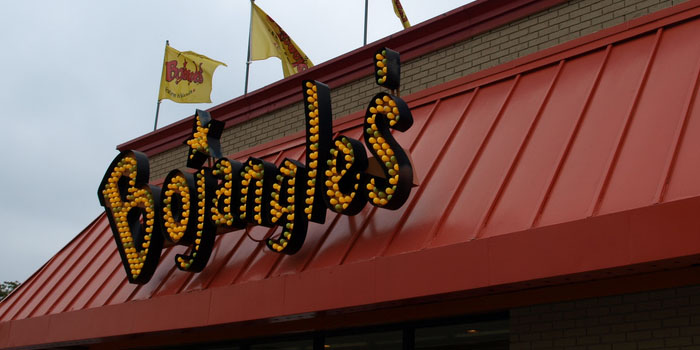 There is a Bojangles’ in Honduras. Five of them, actually. You can find reviews of the one on Roatán Island on TripAdvisor, the most recent thoughts coming from a guy who, a half-hour before, had stepped off a plane with his three kids. They were looking for something familiar. “Don’t hate on me because I ate Bojangles’ on vacation,” he says. “[The] most difficult thing was figuring out the exchange rate and how much a chicken biscuit cost.”

You can get a Bo-Berry Biscuit or chicken Supremes overseas now, but the restaurant chain, founded on West Boulevard in Charlotte in 1977, is still heavy close to home. Of the 622 Bojangles’ restaurants open today, 288 of them are in North Carolina. Sure, it’s fast food, but with a focus on biscuits, sweet tea, and fried chicken, Bojangles’ is Southern at heart.

So it’s probably no surprise that the word “Southern” appears 17 times in the document announcing that Bojangles’ will be going public and start selling stock. “Over the last 38 years,” according to the filing, “we believe Bojangles’ has become an iconic brand with a cult-like following in North Carolina and South Carolina and beyond due to our craveable ‘chicken ’n biscuits.’”

In short: If you’re an investor who lives on Bo Time, soon it’ll be IPO time.

No word on exactly when this’ll happen or how much the shares, which will trade on the NASDAQ under the symbol BOJA, will be priced at initially. What this does mean is that you’ll start seeing more Bojangles’, most likely in the same areas where you’re seeing them already. Also, let’s hope they bring us more of this, which is maybe my favorite local Charlotte commercial of all time:

This is fun and all, but it’s also a good time to look at what I’ll call Southern Fried Franchising: this notion that we can bottle the flavors and feelings that make us who we are and build a business model around them that’ll work outside of North Carolina. Cheerwine, a Salisbury born-and-bred indulgence, is still family-owned but now on sale from Ohio to Florida. Even so, it’s still got a reputation for being fizzy, cherry-flavored North Carolina in a can. On the flip side, Pepsi, which was first poured at a drug store fountain in New Bern more than a century ago, is now the cornerstone of a worldwide empire that is no longer seen as being Southern.

Of course, the idea that Bojangles’ would stray from its North Carolina roots is, according to the guy who runs its Twitter account, laughable:

Bless their hearts. Even in Honduras.

UPDATE (May 8, 2015): Shares of Bojangles stock went on sale this morning at an initial price of $19/share, and their CEO is ringing the closing bell at the Nasdaq MarketSite today. If you’re really excited about this, you can track the price here.