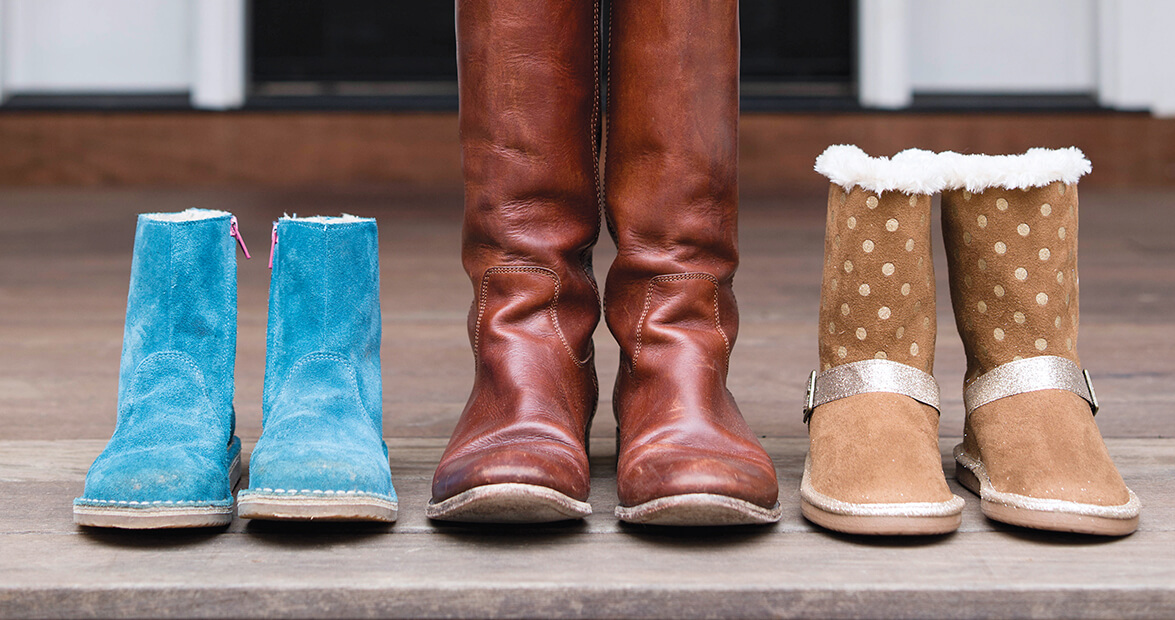 They stand by the door, or out on the stoop, or against the steps.

Red clay clumps the gridded soles, and frayed laces dangle from the eyelets and grommets. They’re permanently creased just behind the rounded toes, and greased with neatsfoot oil every season. Scuffed, rugged, sturdy. Familiar, uncomplaining, hardworking: If we had a state shoe, the boot would surely be it. The ones that follow a mule and a plow; that mash a tractor’s — or a Jeep’s, or a race car’s — clutch; that stride across farm fields and battlefields and shrimp-boat bows.

Combat boots. Hiking boots. Riding boots. Steel-toe work boots, the yellowy leather ones from Sears. Waders, the rubbery ones that go up to your chest — that, slung over the porch railing to dry, are startlingly human-looking, as though someone’s still inside them. In North Carolina, boots have always been far more than footwear. They’re less accessory than necessity: What we do, and how we do it, depends on the absolute dependability of boots.

Yet, as with denim, what lifestyle and practicality demanded segued into desirable fashion. In high school, hipper, hippie-er friends wore fringed suede boots that collapsed like socks when you took them off, a grown-up version of the moccasins we’d stitched from kits as kids. Onward to today’s tight-calved stylin’ footwear in leather, pleather, and plastic. Felted, furred, and tassled. Lace-ups and zippers, hooks and buckles. Whether bulky or second-skin supple, boots are big, and, these days, intended for a lot more than slush. Flowers, for instance. If you haven’t seen old boots used as back-step planters and picnic-table vases, you’re just not looking hard enough.

As a child, though, boots were for snow, and far preferable to finger-pinching, cordovan-colored, sissified rubbers, like the tiny booties our second-grade teacher, Mrs. Biddix, wore for warmth, about which we were typically merciless. My own boots were made of thick, crimson plastic, the color of a fire engine, or a stop sign, or Red Hots candy. They were the kind of boots you pulled over your regular shoes, tucked your pants legs into, and then fastened by stretching an elastic loop over a button. In those boots, my feet were magnificently large, bold, bright, and fearless — whatever the weather.

Unless, that is, snow found its way inside them, and then I was sunk. There was nothing for it except to lie on my back and wait until my mother pulled them off, a task that required using both hands. I faced the boots’ open mouths toward the heat vent or fire flames and went looking for my father’s galoshes, huge and black, with shiny, complicated buckles that rattled and clanked satisfactorily when I clomped around.

That feeling of being securely wrapped, as if you’re pretty much protected from anything Old Man Winter can throw at you, or, at least, at your shins, is the best reason for boots. I like a serviceable, sturdy, needs-no-attention number, with room for thick socks. And if we’re waving the magic, whatever-you-want wand, I’d like a snowfall, please. Eight or nine inches will suffice, so that I can pull on those boots, beat the children to the yard and the SUVs to the street, and make — and admire — those first booted footfalls in a downy white landscape free of flaws.

At day’s end, there’s little that looks more comforting than boots lined up beside the mat, just inside the door, droplets drying on the floor beneath them. The boots might be paired, but they’re not neat, not really. Instead, they slump comfortably against one another, like family members on a sofa. Waiting not at attention, but nevertheless steadfastly, prepared to take on winter’s challenges.