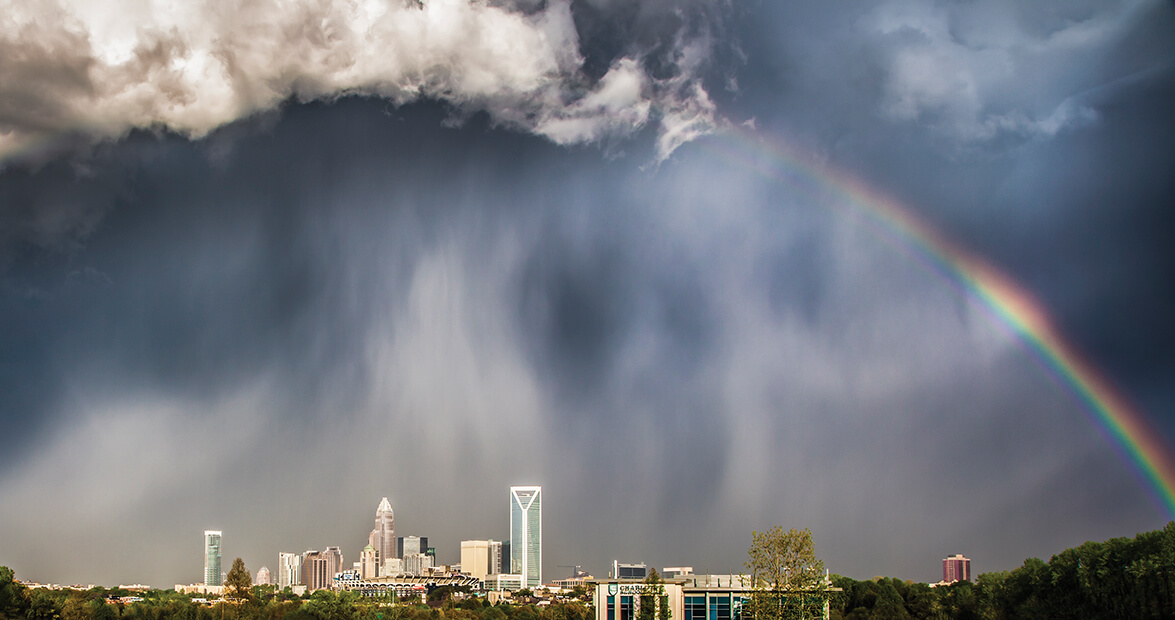 Michelle Prince lives high up in the Element Uptown, a 22-story apartment tower with a striking view of Uptown Charlotte’s skyscrapers. From her perch, she takes pictures. “Several times a week,” she says. Those pictures sometimes find their way to Facebook or Instagram, but mostly they just stay on her phone. Still, she invariably takes the same photo. From the same spot. Over and over.

In that way, Charlotte is the selfie city. People are eternally snapping, and posting, images of the skyline. Some are true selfies, with the photographer’s face in the frame, but many more are taken without. On a commute. During a jog. In the fog. In magic morning light. In harsh midday sun. From a sidewalk, looking up. From a crane, looking down.

Charlotte is constantly photographing itself. 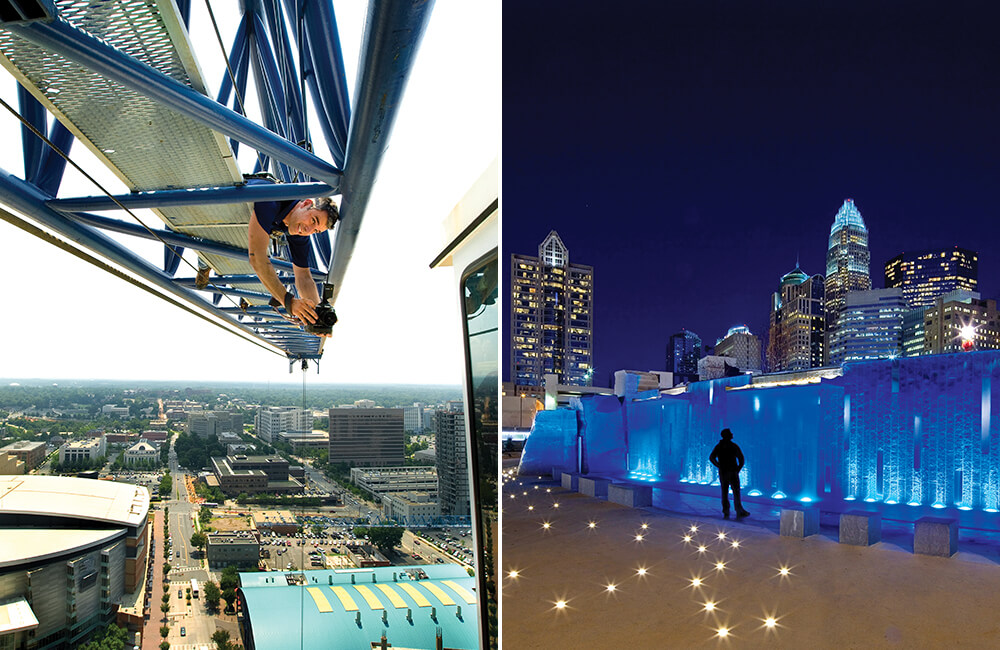 Left: Photographer Patrick Schneider will go to great lengths — or heights — to get his shot, including this selfie taken on a crane. Right: The fountains at Romare Bearden Park are sought after by picture takers looking to snap a great skyline shot. photograph by Patrick Schneider

It’s easy to paint the city as obsessed with its own image. It’s more nuanced, maybe, to see Charlotte as a place where people are obsessively documenting its present, because the future isn’t decades or even years away: Here, the city changes month by month, even day by day. “Coming soon!” signs are regularly replaced by ones that say, “Now open!” A photograph of a street corner may no longer represent reality weeks later. Around Romare Bearden Park, below Prince’s apartment, high-rises keep rising, cranes swing around, and yellow-vested, hard-hatted workers take their breaks. Tomorrow, the backdrop will be different. And again the next day. Charlotte may be the only city in North Carolina where so much is happening so fast.

So, every day, from Prince’s overlook, the buildings get a little higher, more blue sky is replaced by steel and stone, and the park below fills and empties. White skyscraper lights twinkle. Red taillights burn. Gray shadows shift and lengthen. With each sunset, the glass glints differently, and the city is bathed in new hues of orange and purple. Prince’s balcony photos are consistently taken from the same spot, but she never captures the same image twice. “I’m always struck by how beautiful it is at different moments,” she says, and perhaps that’s what makes a picture of Charlotte a picture that’s always worth taking.

1. GO: Chris Austin chases storms. “You want drama,” he says. So on a March day in Charlotte in 2012, when thunder sounded and lightning appeared, Chris grabbed his Canon 5D Mark II and drove to a small hilltop off Wilkinson Boulevard, west of Uptown Charlotte, hoping to capture some lightning shots.

2. WAIT: Chris missed the lightning, but waited out the storm. Once the rain moved behind the skyline and the sun appeared at his back, he snapped the perfect picture. The drama is there: fluffy clouds, a rainbow, a dark backdrop, pounding rain, and shimmering buildings. Yes, Chris has skill, but he also knew how to be in the right place at the right time.

3. POST: Chris posted the picture online, and Facebook and Twitter did the rest, spreading the shot around to the astonishment of everyone who saw it. His blog was inundated with comments, 448 in all, mostly from people asking how to buy it. A week later, he unveiled a 90-inch print on live television.

4. ENJOY: That was almost five years ago. Chris has a day job, but now specializes in taking “skyline photography,” which, in Charlotte, is a thing you can do. This picture is still his most popular. Unlike the storm, he never saw the reaction coming.

3 Spots to Enjoy and Capture the Charlotte Skyline 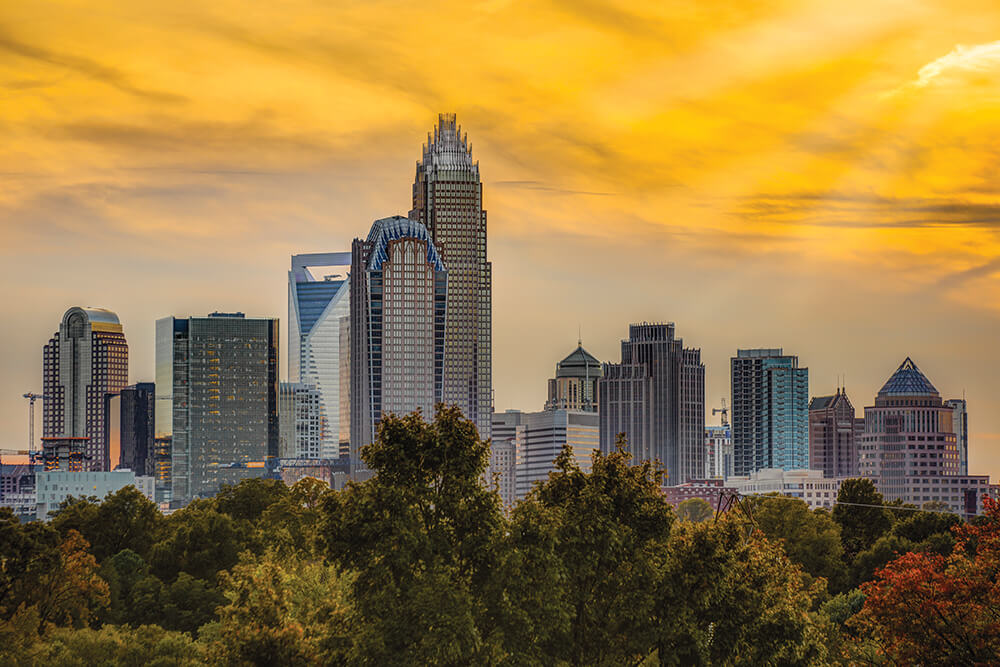 This park on a hill near the city’s NoDa neighborhood is a popular stop for photographers who want to put Charlotte’s tall buildings prominently in the background, or the foreground.
2100 North Davidson Street 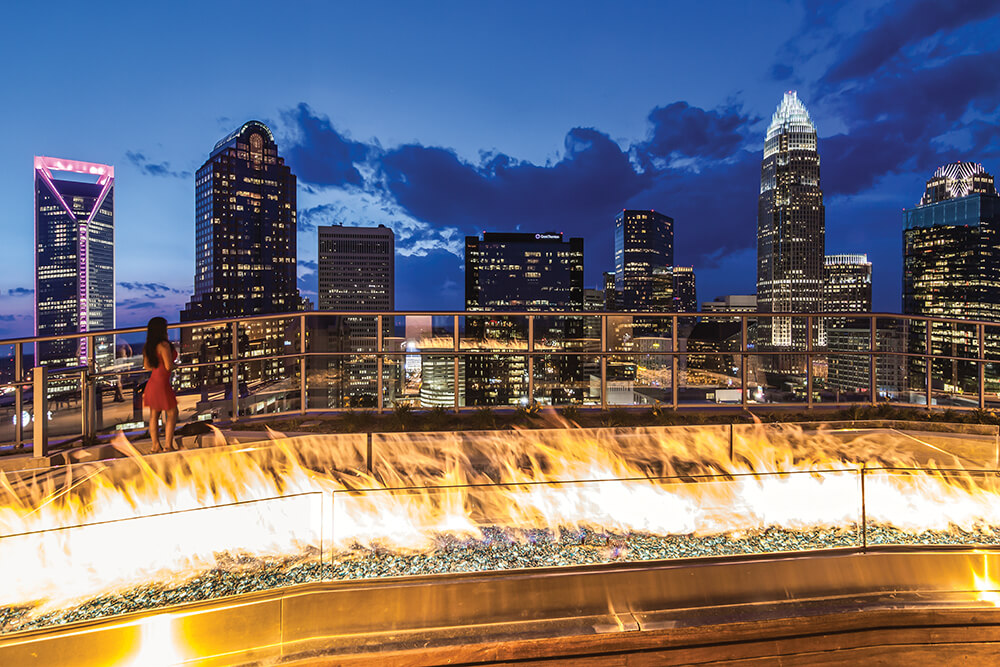 Chef Rocco Whalen’s rooftop restaurant is a great place to enjoy dinner and cocktails uptown, and the wraparound patio lets you get outside for a hot shot of Charlotte’s skyline from 21 stories up.
222 South Caldwell Street 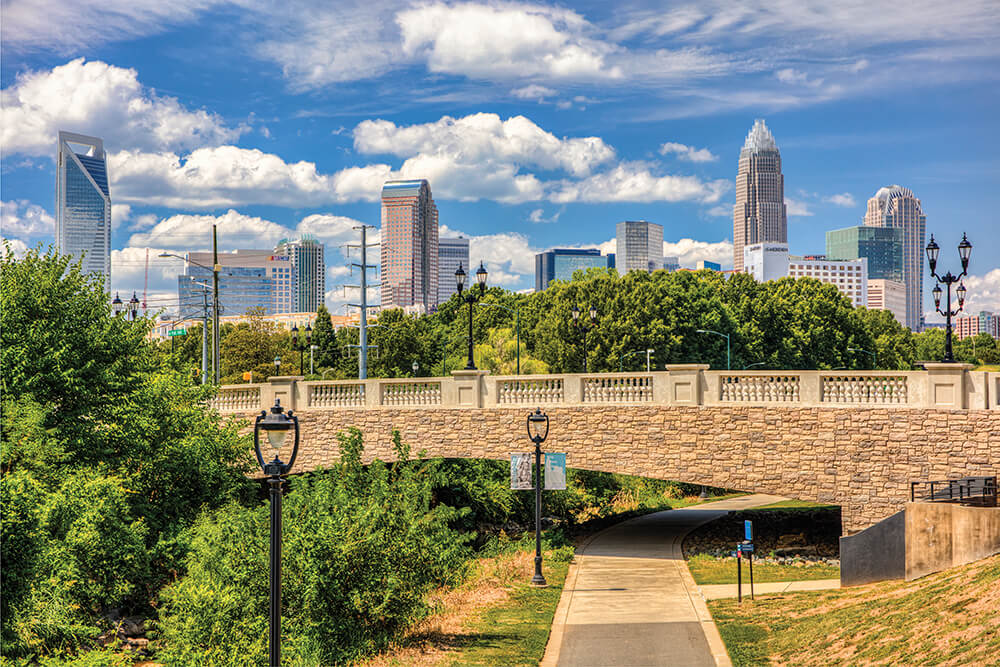 Not only can you get a clear view of uptown from the Little Sugar Creek Greenway, but you can also stop along the way for food, beer, bocce, and more.
South Kings Drive and Pearl Park Way

Let There Be Light

A unique spot in Charlotte that’s focused on photography gets a second chance. 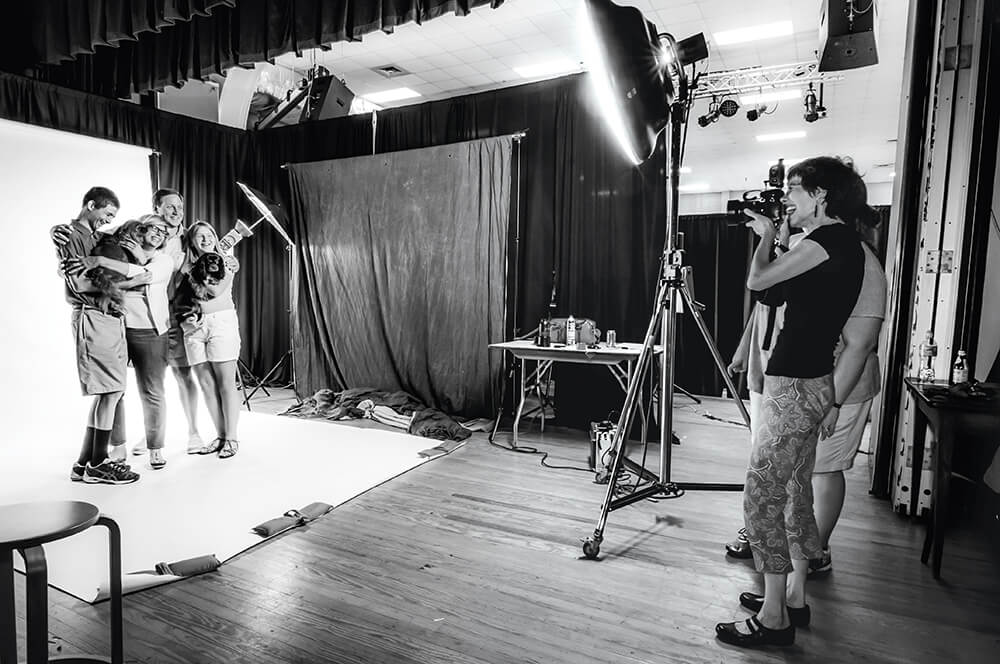 In 2014, it looked like The Light Factory in Uptown Charlotte, one of only four museums in the country dedicated to photography, would close for good. Money was running out, and the organization couldn’t pay the rent. That’s when a group of volunteers stepped in with money and know-how, and raised enough cash to reopen the museum on Central Avenue in Charlotte’s Plaza Midwood neighborhood. Today, The Light Factory continues with its mission, offering photography classes, guest speakers, and exhibitions. Now, in the museum’s 45th year, it’s proving that sometimes it takes darkness to bring out the light.