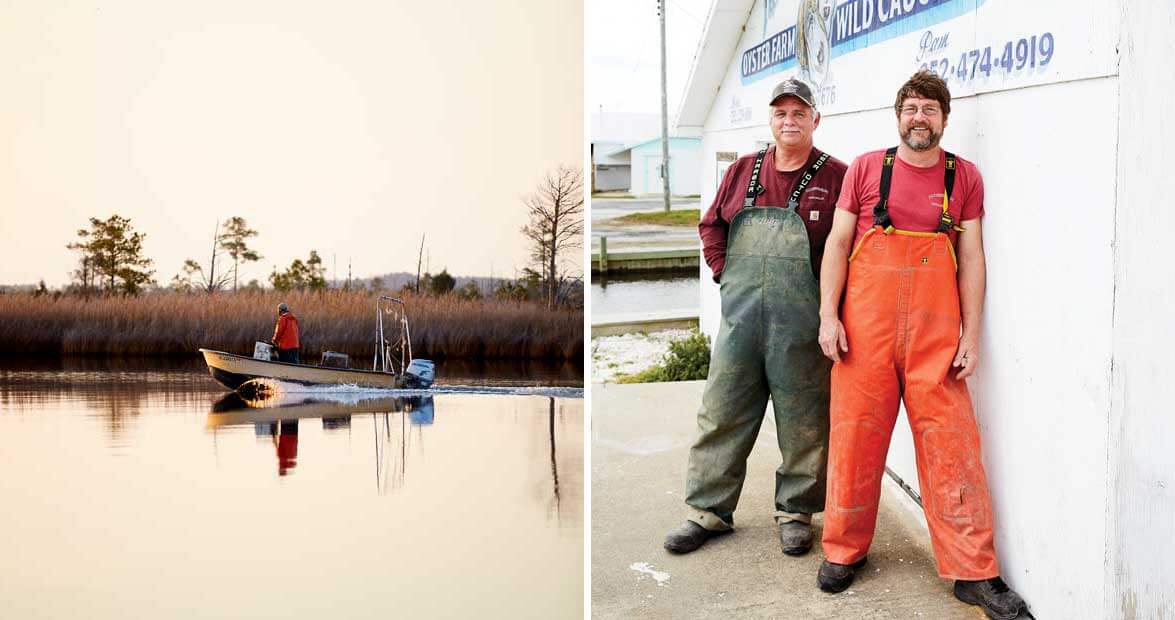 Lowland is right where the state stops, only three feet above sea level, at the end of a long road 36 miles from New Bern, across the sound from Belhaven. It’s lonely and wild. Black bears climb pear trees, and salt marsh mosquitoes rise from the reeds to greet you. Because it was separated from Beaufort County by the sound, Lowland joined Pamlico County instead. Then the Intracoastal Waterway was built in the 1920s, slicing the town and its neighbor, Hobucken, from the rest of the state, bounding it on all sides with water as Goose Creek Island. All along, its hundreds of residents farmed and fished as families.

“They could put larger nets out there, larger dredges, and cover more bottom,” he says. “In the ’50s, when I was about 9 years old, the shrimping in the Pamlico Sound played out. What happened was, these big trawlers were raking the bottom and taking away the food source for the shrimp and crabs.”

One by one, the fish houses shuttered.

Scooter Leary is the last Lowlander who makes his living fishing in the island’s waters. “I’ve been fishing almost 60 years, since I was 10 years old,” Scooter says. “I got my fishing from my dad. I went out and fished with him nighttime and daytime, and I learned the trade with him.”

He harvests crab and fish, and progs for wild oysters. Lowlanders call it “progging” for oysters — dragging a chain to feel for oyster rocks deep beneath the water’s surface. “There’s an art to it. I hold the cable in my hand,” Scooter says. “I can feel it shaking on the rock’s edge. You can tell the difference between oysters and other shells, if you know how it feels.”

In August 2011, Irene yawned at the mouth of the Pamlico River for more than two hours. She wasn’t strong for a hurricane, but she was persistent. Her northeast gusts blew waters from the Pamlico and its tributaries onto shore; crests spread across the land like a warm, wet hand. Brackish water crept up Lowland’s front steps, then lapped at floorboards, and finally made itself at home in all but six of the nearly 200 houses in the coastal community. Fish swam in garages; unpiloted boats drifted across fields.

The water washed over Zool Ireland’s duck hunter’s camp at the end of the road. The cinder-block structure was built by his father in 1948 and opened to the sound. It was once a fish and crab processing plant, a co-op, one of six on the island. Fishermen across Goose Creek Island brought their bounty from the sound, resting their boats in small creeks cut through the marshland.

Zool’s son Ivan came back after the waters receded and found the fish house smashed. He looked around and saw his whole homeplace, the island, gone, too.

“Irene tore this place near about down,” he says. “I couldn’t stand to sit here and see this go down to nothing. Me and my wife, Pam, and Dad put together the resources to put it back.”

Repairing a building is one thing; rebuilding an existence requires more than tools and stone. Ivan had to find a new way of life for Lowland, built from the old one.

For the past three decades, Ivan made a living the way many Goose Creek Islanders did: He fished for scallops on commercial boats along the East Coast. The work kept him away from home for weeks at a time, as his boat navigated the narrow gap between nature and government regulations.

Before that, he’d worked with his family and neighbors at the plant at the end of the road. He picked steamed crabs and packed fish. His friend Robbie Mercer worked there, too, when they were kids.

Robbie and his father ran the boats that Ivan and other Lowlanders fished from. As children, Robbie and Ivan played at Zool’s plant together. As adults, they fished together from Robbie’s father’s commercial boats. After Irene, and after more than 30 years at sea together, they were both ready to come home to Lowland. “The problem was, I didn’t know how to do anything but work,” Robbie says.

Lowlanders were made from the land, but they are people of the water, and they need to fish.

“The water is something that gets in your blood,” Muff says. “And Goose Creek Island people are probably some of the most independent people there are. They don’t like bosses, and they don’t like to be ordered around. In fishing and farming, you can do that. You are on your own.”

Answering only to the weather, fishermen kept their families in Lowland and climbed aboard boats for weeks at a time to fish up and down the coast — from Canada to Florida to the Gulf of Mexico — chasing tides and schools, pulling life from the water to make their own lives. And they always came home.

After Irene, their homes were gone. The ground was left salty by Irene’s surge, and farming grew poor. Duck hunters moved onto farmland, and lifetime residents gave way to seasonal visitors. Federal regulations squeezed small fishermen out of business. Ivan’s family’s packing plant was in ruins.

Ivan looked to his lifetime at sea. He had spent years along the northern Atlantic Coast. He’d watched men pull oysters from the water in cages like crab pots, growing them like soybeans in waters where they used to catch them wild.

He came to Robbie with an idea. Everything about Lowland, made new. Farming in the sea. They formed I&M Oyster Company. “Pam and I got in the car and drove all the way to New York,” Ivan says. “We went to oyster farms along the coast and asked questions, and we learned how they did it.” 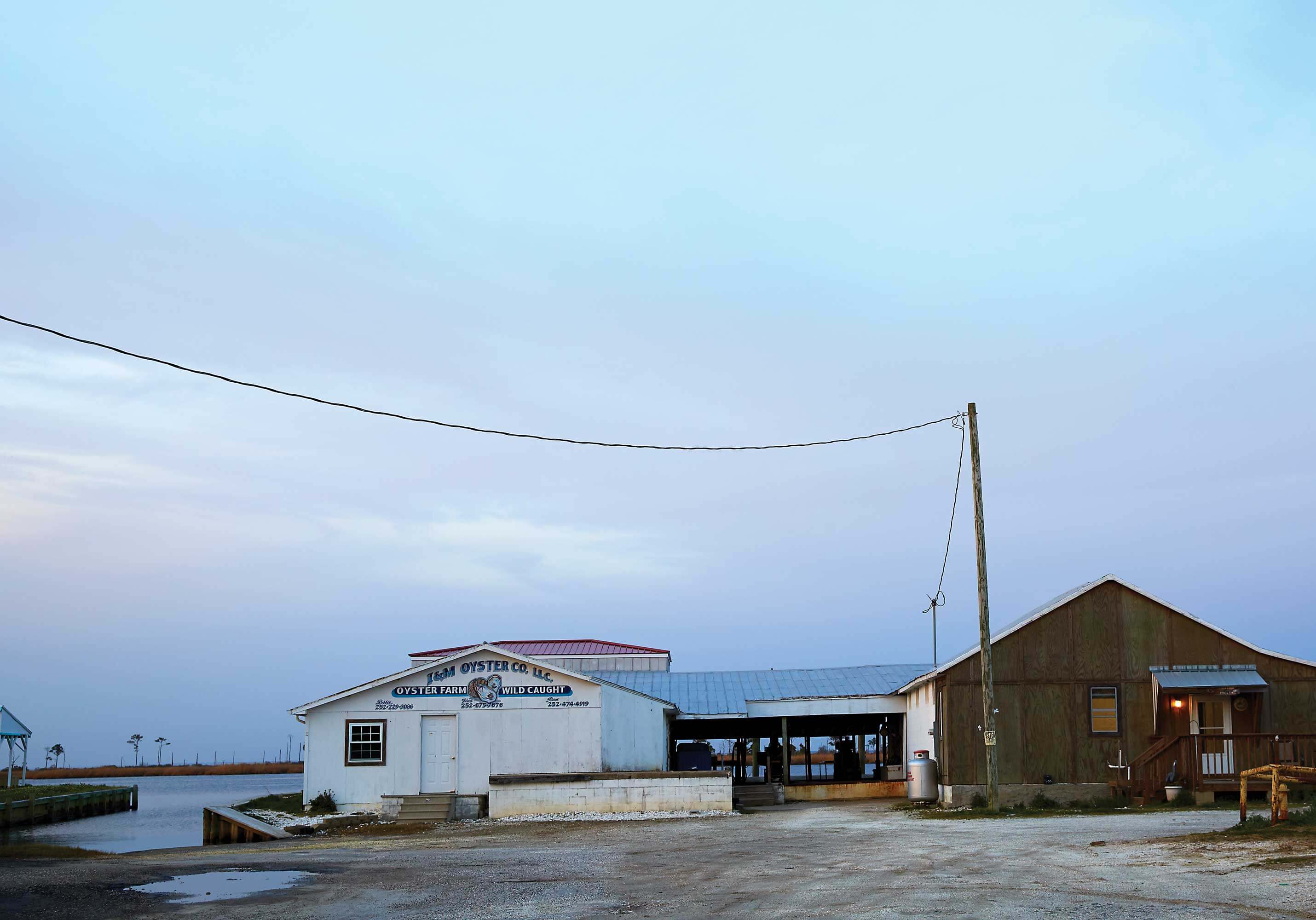 The building on Goose Creek Island that’s now home to I&M Oyster Farm has been tested by storms for 70 years. Florence blew its doors out, but it’s still standing. photograph by Stacey Van Berkel

The water is different up north. Cool weather hangs around longer and big storms batter — but not as often, and usually more gently. The salinity is different, too. Through trial and error, Robbie and Ivan had to learn how to grow oysters in North Carolina’s waters. “Me and Ivan went at it like two mad dogs, and we killed a lot of oysters in the process,” Robbie says.

After a couple of years, they figured it out.

Today, they work out of Zool’s old processing plant. Half of the plant remains a camp for duck hunters. The other half is an oyster farming operation. There is a tank for baby oysters, called spat. A tumbler to knock off jagged edges and to sort by size. A saltwater tank to ensure that each shellfish has the perfect level of saltiness. And a stack of cages to keep their crop. These implements are where the human influences stop. The oysters are grown in the wild. 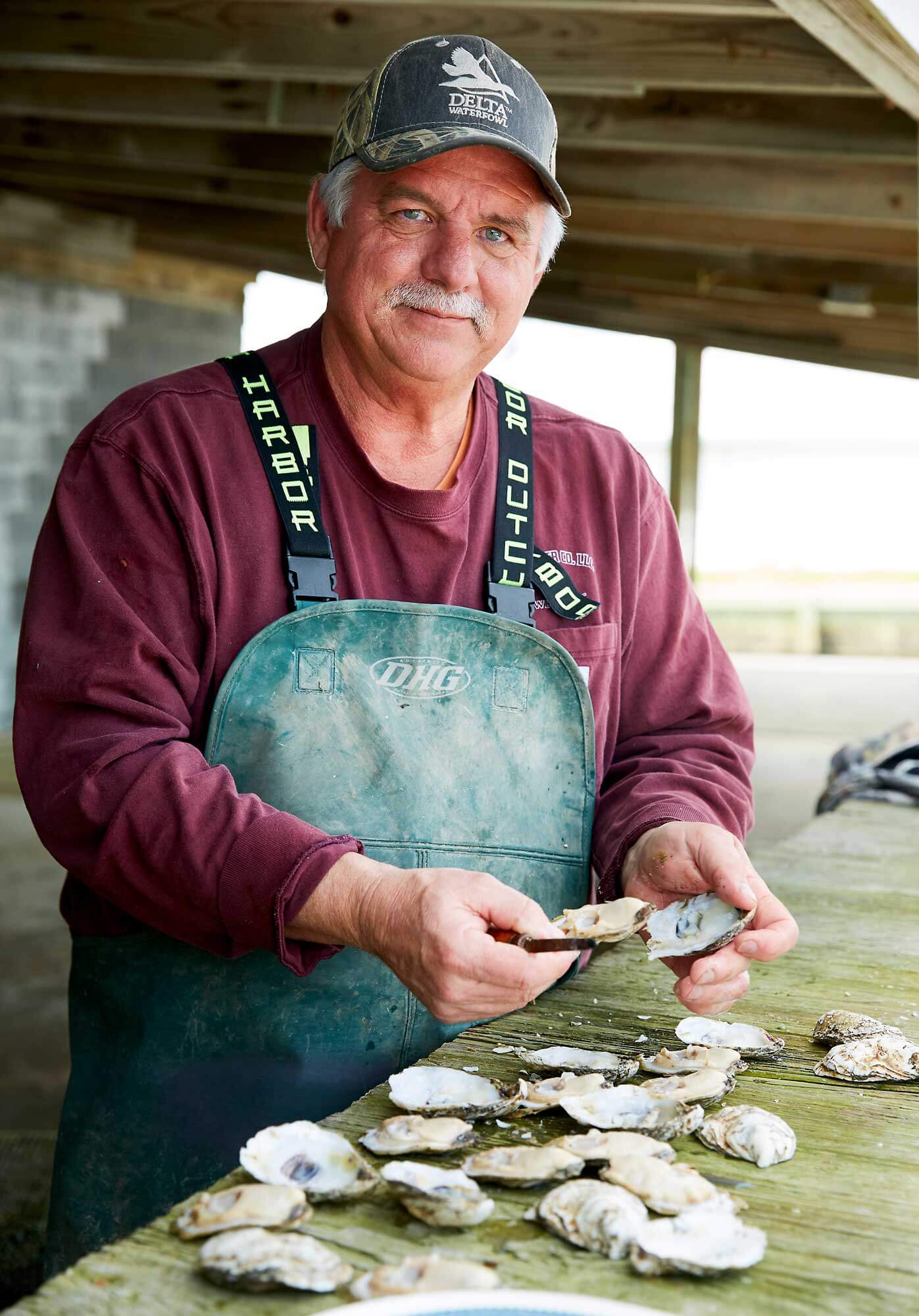 One of the perks of being an oyster farmer: Robbie enjoys homegrown lunches on the half shell. photograph by Stacey Van Berkel

It’s early enough in the day that the sun hasn’t quite made it over the trees. Ivan and two young Lowland men, TJ and Richard, take a 25-foot Carolina Skiff down the river to harvest. Beyond the hum of the boat’s motor is a duck blind tucked in the reeds, the only sign that humans exist, have ever existed. Cormorants dive for fish. Red-winged blackbirds sit impossibly high on reeds along the shore, singing songs that sound like the water itself. The sky spreads big, from reed tip to reed tip, from sea to treetops.

The men carry hooks on long staffs called catchpoles, and they quietly motor to 10 acres marked by pylons where the Pungo River meets Oyster Creek and flows into the mouth of the Pamlico River. There, waters flow gently to Pamlico Sound. This is where Irene yawned seven years ago, and now it’s where the oysters grow. The oysters live in cages and open their mouths to the mouths of these rivers, filtering, washing the water.

TJ hooks oyster cages one by one and pulls them to the boat, a cage for each order that needs filling. Each cage holds all forms of sea life hiding between shells, wiggling in spreading puddles on the boat’s bow. This is the harvest. Back at the farm, the men will sort and bag them, bushels and pecks. These oysters are called Pamlico Sound’s Bounty, named for the water that gives them their plumpness and flavor. 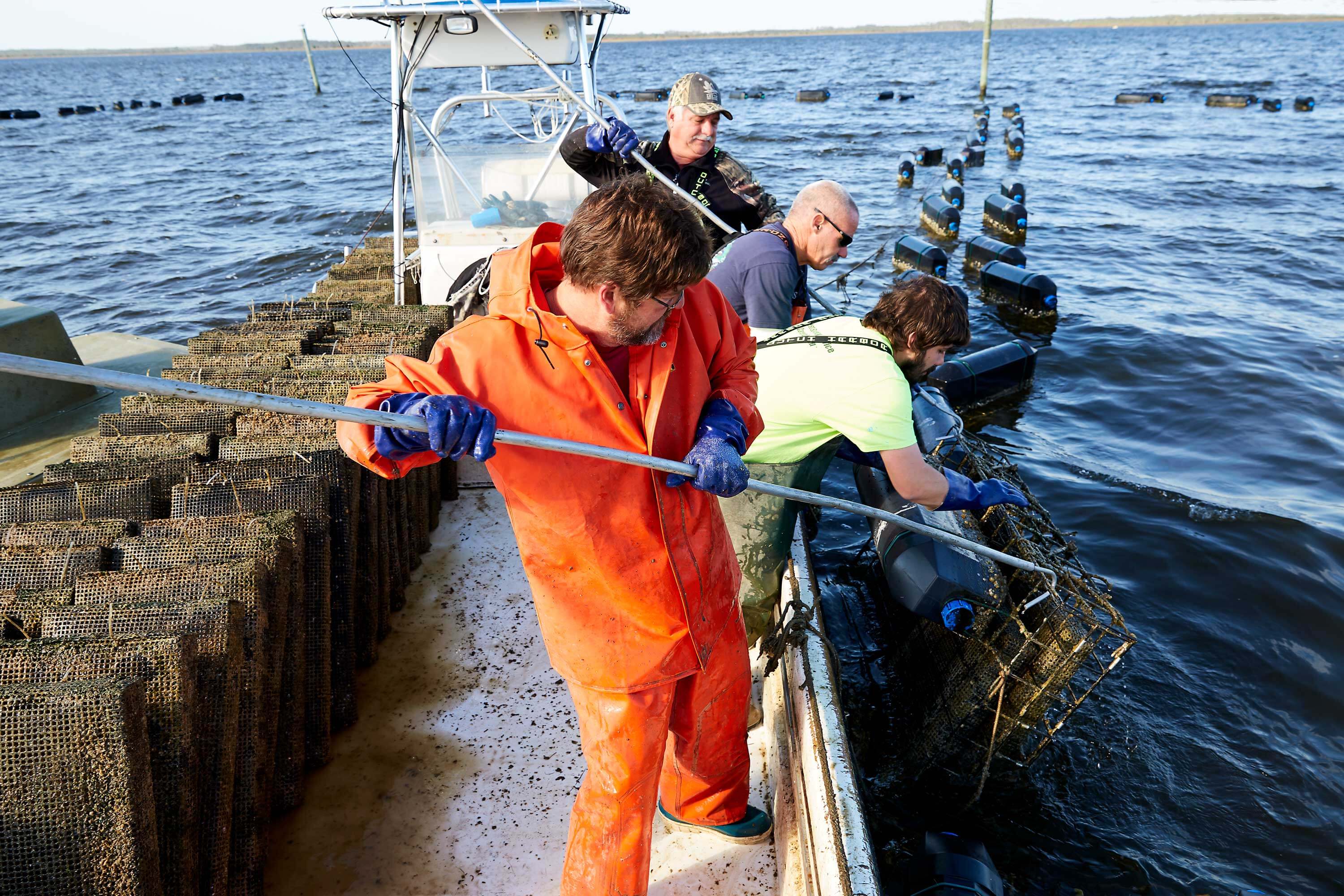 Robbie and Ivan are still tinkering, learning, discovering. They have the only tank in the state capable of raising the oysters’ salinity during times of heavy rainfall. The operation is growing, bringing in a new generation of fisherpeople, Goose Creek Islanders like TJ and Richard, who come from generations of people who made their lives on the water.

Muff Potter still keeps the land he farmed as a child. He visits it, walks on it, stands in Lowland.

“I go across the high-rise bridge over the Intracoastal Waterway to Lowland,” he says. “I look out toward the east and the southeast. It’s a beautiful sight to see all the woodland and all the water. But when you go across the bridge and come down, you see house after house that’s empty and going away.”

Between hurricanes Irene and Florence, the population dropped below 200 on the island, where more than a thousand once made their lives.

“This year is the first time I’ve ever known in my lifetime of 73 years that no crops are planted here,” Muff says. “The only ones that are planted are for the duck hunters to bait the ducks.”

But just past that wild land, beyond the end of the road, a new crop grows.