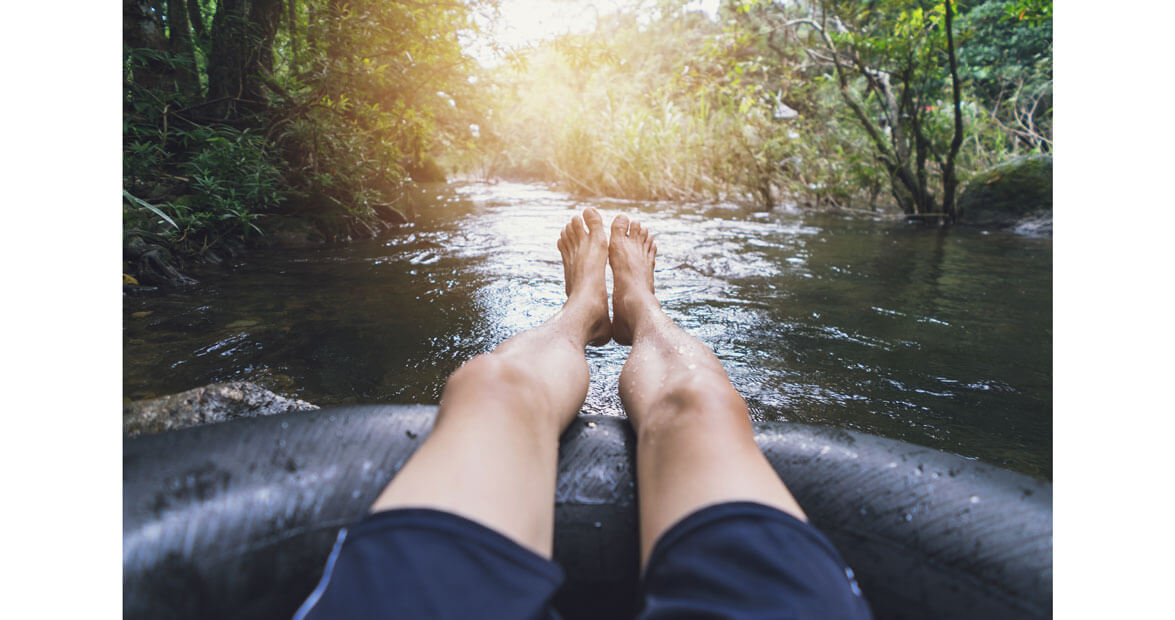 Thanks to BEER NC, a complete roundup of North Carolina’s breweries is just a few taps away on your mobile device. This summer, we’re making the experience even more fun with our regional Brewery Adventures series. Find out about some of the best places to explore across the Old North State — and where to grab a cold craft brew afterward — in our monthly roundups.

After a long day of exploring Chimney Rock State Park, go with the flow at this riverside brewery. Hike the short but intense Exclamation Point Trail for a stunning view of Chimney Rock and Lake Lure from the highest point in the park. Then, head to this neighboring brewery and venture onto the deck. Look up to see the town’s namesake from a different perspective, or just slip into a riverside Adirondack chair, kick back, and watch kayakers paddle by on the Rocky Broad River. Try the River Otter IPA, named after the family of fuzzy visitors who frequently play in the currents.

The Appalachian Trail passes by just up the road from the designated Appalachian Trail Community of Franklin — and this hiker-friendly taproom. Take the trail to the summit of Wayah Bald and climb the stone lookout tower for panoramic views of the surrounding mountains: On a clear day, you can see north to Tennessee and south to Georgia. Then, do as the thru-hikers do and make your way to this brewery, a short hike from the AT, to put your boots up. Try the Trail Mate, a light and crisp golden ale.

Located along the Pigeon River in Canton, BearWaters Brewing also acts as a base camp for Pigeon River Outfitters, a tubing rental company. Reserve a trip, and you’ll be shuttled to a drop-off point upriver for a two- to three-hour float. Eventually, you’ll float right back to BearWaters, where, after a day on the water, you can relax in the riverside backyard. Try the Stiff Paddle, an American pale ale with flavors of grapefruit, pine, and tropical fruit.

For a unique way to cool off, spend the day slip-sliding away at Sliding Rock, a mountain waterfall on a sloping 60-foot boulder that acts as a natural slide and swimming hole in Pisgah National Forest. When you’re worn out, take a quick 10-minute drive over to Ecusta Brewing at the entrance to Pisgah — stopping at the jaw-dropping Looking Glass Falls on the way — for an equally chilly beer on a sunny patio. Try the Pink Beds, a tangy wild sour ale named after a nearby hike.

Perched on the Tuckasegee River between Great Smoky Mountains National Park and Nantahala National Forest, Bryson City is a storied spot for trout fishing. And you don’t even have to leave downtown: Take a footbridge over to Island Park, put on your waders, and cast a line, or launch a kayak from the island’s access point. Later, head a few blocks away to Nantahala Brewing, located in a restored warehouse, to celebrate your catch (or ease your disappointment). Try the Hellbender, a refreshing hefeweizen named after the aquatic salamanders found in North Carolina rivers.