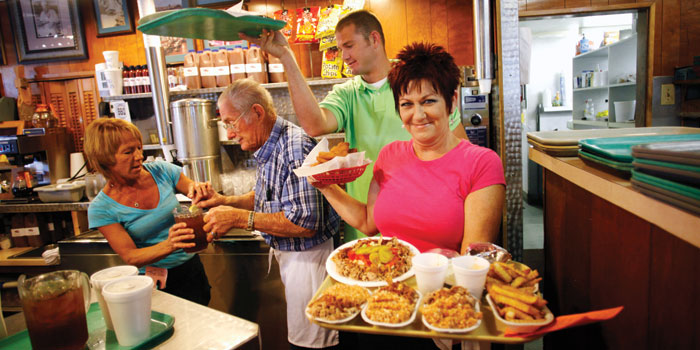 The first thing you’ll notice when you drive up to Bridges Barbecue Lodge on U.S. Highway 74 Bypass just east of Shelby is that it has to be the neatest, cleanest barbecue place on the face of the earth. But what about the commonly held belief that the shabbiest exterior generally houses the best barbecue? For a minute, you may think you’ve stumbled upon one of those all-electric franchise barbecue places with the calico curtains and fake country furnishings. It’s all just too nice. The parking lot, shaded by large trees, is immaculate. There’s a white picket fence and a neat mailbox decorated with a pink pig. Then you’ll spy the woodpile out back, which is just about as large as the restaurant. That’s a good sign, but wait … What is it about that woodpile? The logs are neatly stacked according to length and diameter, and the whole thing looks like it’s just been dusted. It is no man’s woodpile, all tumbled over with the logs lying every which way. This woodpile — in fact, this restaurant — has a woman’s touch all over it.

Bridges is still known to some folks around Shelby as Red Bridges’ Barbecue Lodge. But Red’s widow, Lyttle (pronounced “Light-ul”), otherwise known as “Mama B,” was the heart and soul of the place for many years from Red’s passing until shortly before her death in 2008. Now, Red and Lyttle’s daughter, Debbie Bridges-Webb, is in charge, with the help of her daughter, Natalie Ramsey, and her son, Chase Webb.

Bridges celebrated sixty-five years in business in 2011. For nearly the last four decades of that time, Mama B steadfastly carried on the business her late husband learned from Warner Stamey in the 1930s. Red Bridges established his own place in 1946. No doubt, Mama B and her husband both had red hair when they started out. But following Red’s death in the mid-1960s, Mama B was the one the staff referred to as “the redhead.”

It’s obvious that Debbie Bridges-Webb, like her mother before her, derives not only her income, but also a great deal of her social contact and her overall satisfaction in life from operating the restaurant. Lyttle used to say the biggest challenge was “to become the best,” but she unhesitatingly added that she thought she had achieved that goal with the help of her coworkers, several of whom had been with the business for a long time. “I’ve always liked to work hard,” she used to say, but she pointed out that she tried to maintain a level of excellence by providing the staff a good balance between work and rest. Debbie has maintained the practice of closing the restaurant each Monday and Tuesday, in addition to closing for a week in July and the week after Christmas. Of course, Debbie is at the restaurant during those breaks, as was Lyttle, who said she kept herself busy “lifting up everything in the restaurant and cleaning underneath it.”