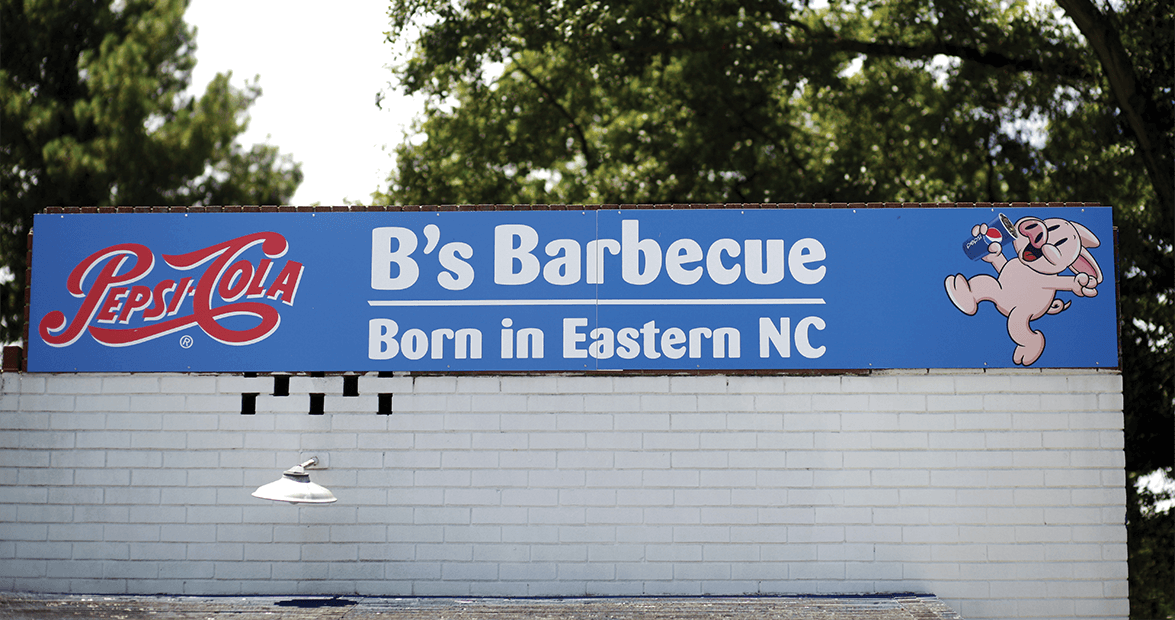 Peggy McLawhorn and her three daughters — Tammy, Donna, and Judy — ran B’s for many years. Peggy has now retired and left her daughters to keep the tradition going. On any given day, customers used to find at least three of the four behind the cafeteria-style counter, dressed in baseball caps and T-shirts, cheerfully frazzled and dishing up barbecue and chicken dinners like women possessed. The frantic energy of the restaurant was on display when I first visited the place to tape a segment for UNC-TV’s “North Carolina Now.” Because B’s has no telephone, I was unable to make the usual advance arrangements. When I showed up unannounced with a television crew, Peggy and her daughters were so busy serving the usual lunchtime mob that they hardly noticed my cameraman, Jerome Moore, moving around the kitchen area, practically underfoot, to get the shots he needed. After the crowd thinned, the crew set up lights around one of the booths, and we taped a long sequence of shots of me eating and commenting on B’s delicious chopped-pork barbecue and barbecued chicken. Only when we had finished shooting the entire segment and were packing up the equipment around 2 p.m. did Peggy have a chance to get out from behind the counter long enough to come over and ask, “Who are you people, anyway?”

Now, visitors aren’t likely to see Peggy at the restaurant, but the daughters are as much in evidence as always, still working as hard as ever. 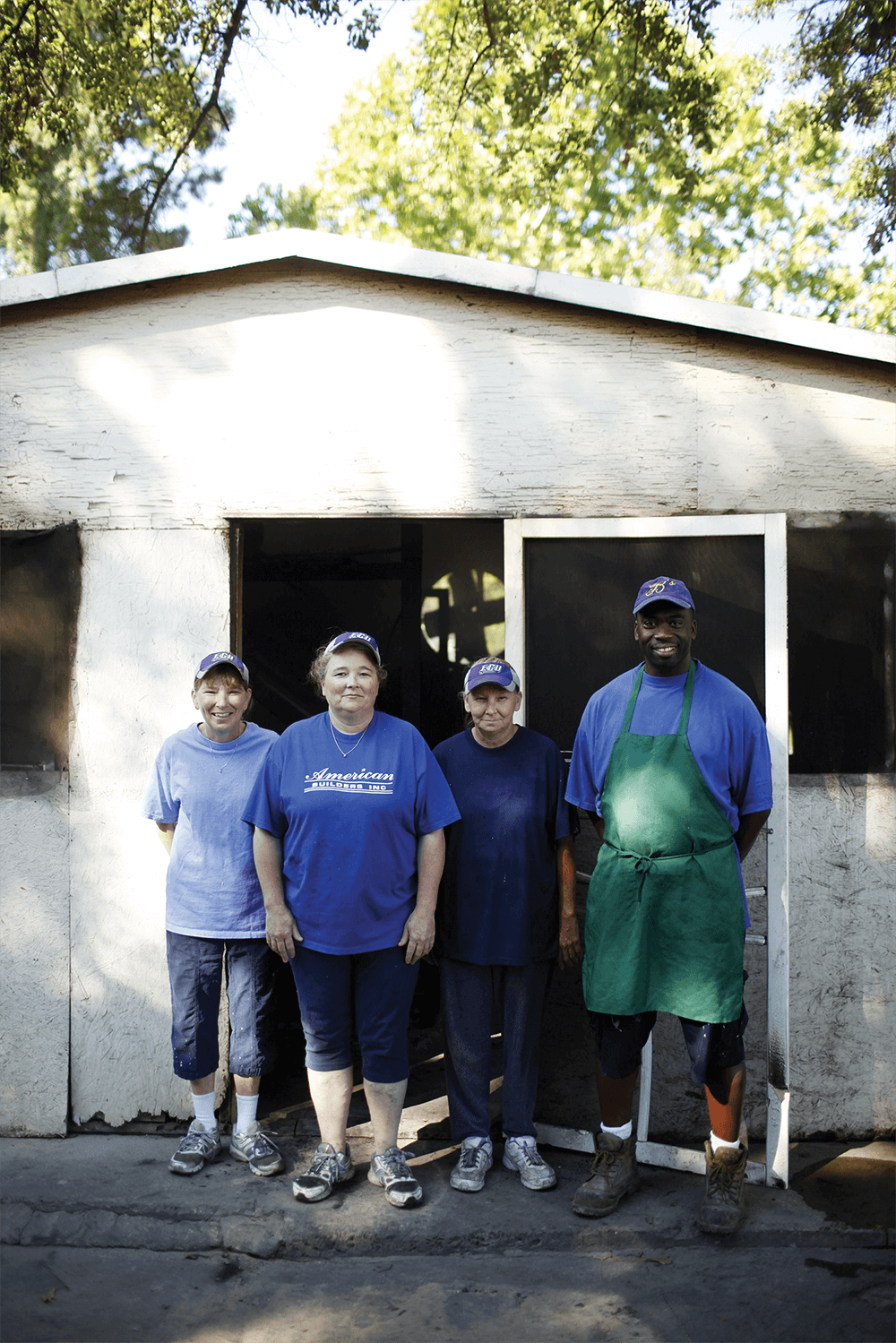 The overwhelming success of B’s was sort of a happy accident for the McLawhorn family. Eighteen years ago, the late Bill McLawhorn and his wife, Peggy, decided to get out of farming and look for another line of work. Bill had barbecued pigs and chickens more or less as a hobby for years, and he thought he had a pretty good sauce recipe, so the couple decided to look into the barbecue business. “There wasn’t any kind of restaurant out on 43,” Peggy remembers, “so we bought this old country store and fixed it up the best we could.” A brother-in-law named Bob was a partner originally, and since the letter B could stand for both Bill and Bob, the restaurant simply became “B’s.” The McLawhorns built a screened shed behind the restaurant and installed open pits. Today, the smoke from the roasting pork and chicken still billows in waves through the screens and across the yard, where it settles over the customers busily eating at the red-painted picnic tables, infusing their clothing with a faint, delightful aroma that reminds them for the rest of the afternoon of the great meal they enjoyed.

B’s could probably double its volume if the McLawhorn women could find time to expand. But for years, they’ve just been trying to keep their heads above water in dealing with the current trade. “We sure never thought this business would turn out anything like it has,” Peggy says, “and it’s probably going to get bigger with all the building that’s going on out this way.” Indeed, the farmland on B’s side of Greenville is rapidly being transformed into a suburban landscape, with apartment complexes, condominiums, and large new homes crowding out the tobacco barns and open fields that characterized the region for decades. 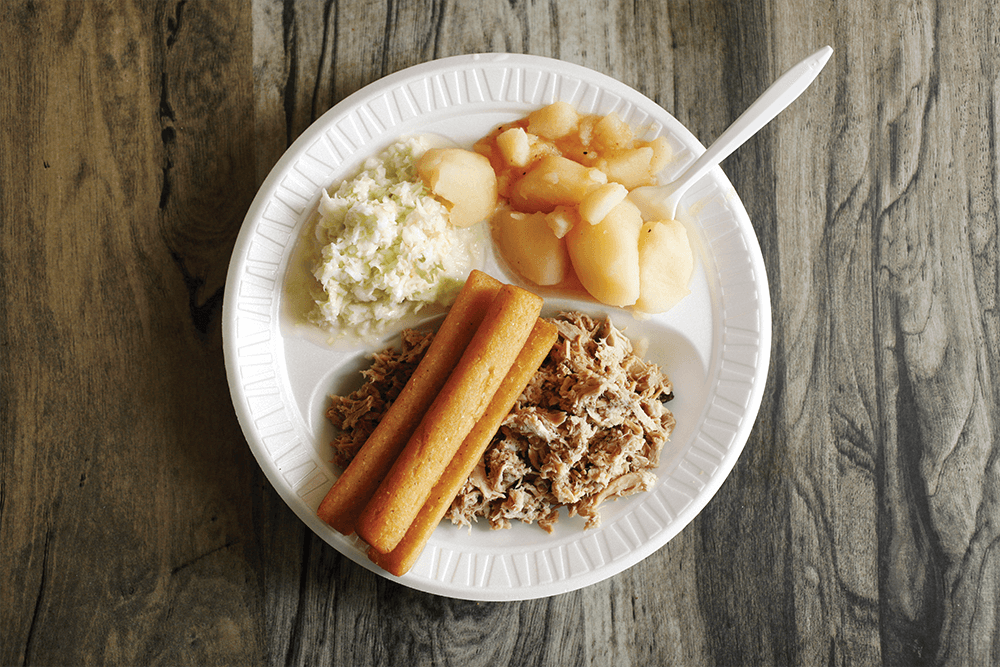 When the road widening occurred, rumors circulated that B’s would close its doors. But the McLawhorn daughters decided to stay on. They put a new sign on top of the building, even though it was the free kind provided by soft-drink companies. B’s hasn’t been fancy at any time in its history, and the family obviously didn’t think it was the time to start putting on airs. The parking-lot paving did bring a fresh look to the exterior, but the overall impression is still no-nonsense.

A couple of key pit men and cooks have passed away over the years, along with founder Bill McLawhorn. And following Peggy’s retirement, the place has a slightly different feel. Still, customers swear there’s no way the food could get any better than it is at this moment.