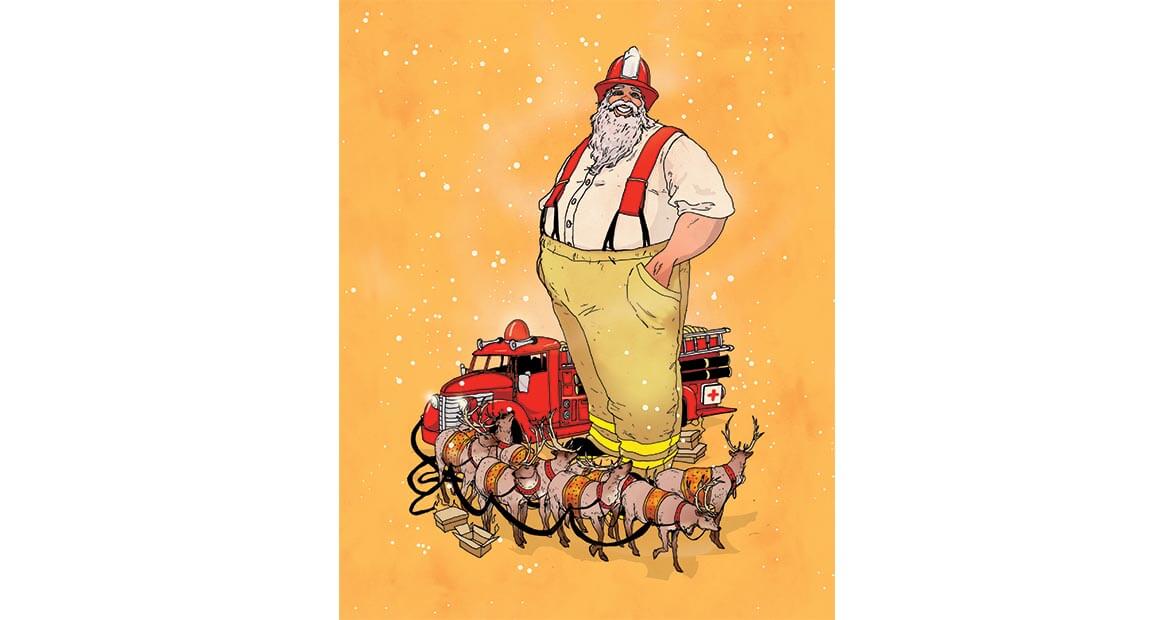 I don’t begrudge you your hours-long idling in front of the football games, your stirring and simmering of what’s left of the Christmas turkey into turkey soup.

You can have your Norman Rockwell day-after-Christmas traditions. Give me a can of lighter fluid and a box of long matches.

“Make sure you’re wearing long sleeves!” I holler up to my son, Jack. “And a hat! You know what happened a couple of years ago!”

’Tis the day after Christmas. Give me the Burning of the Boxes.

It probably wasn’t the smartest idea, but I figured I could keep things under control. We were at the peak of those years when Christmas present giving was over the top — a by-product of traveling father/working mother guilt, I’ll admit. But wrapping tons of gifts, so that the magic of Christmas morning would last as long as possible, was also simply so much fun. One particularly cold day-after-Christmas, the stack of cardboard boxes and wrapping paper nearly blocked the basement door. I was struck, so to speak, with inspiration.

Jack and I piled the trimmings in the backyard and started small, torching a couple of boxes at a time. That lasted maybe 90 seconds. Soon we were piling on the fuel — tissue paper, UPS cartons, foil bows. The flames leapt 10 feet high. We were thunderstruck. An element of “Hey y’all, watch this!” marked the tradition early on. Each year, the Burning of the Boxes was like a scene out of Lord of the Flies, with Jack’s and my silhouettes dancing in front of a wall of fire.

Of course I tried to be a good parent. I really didn’t want to talk to the friendly people from Social Services.

Them: Sir, why is your child on fire?

Me: Have you ever torched the clamshell box from a My Little Pony merry-go-round? There was a half-acre of hard plastic in that thing! I’m just glad I saved the house.

So, I take precautions. I rake the ground clean around the fire ring. I prune the lower branches of the pecan tree. I hose down the lawn and soak half the neighbor’s yard. We keep a shovel handy, with a five-gallon bucket of water and the fire extinguisher from under the kitchen sink. Years ago, my wife, Julie, and my daughter, Markie, opted out of participating in this cherished family ritual. They close the blinds and lock the front door. There’s less chance of being identified that way.

One year, the fire grew so intense that we donned the full-face helmets from Jack’s Airsoft rifle set. “Really?” Julie asked. “How many adolescent boys live in this house?”

We know we’re close to losing control when the uppermost branches in the pecan tree sway with the rising superheated thermals, like a thunderstorm is coming.

I hit ’em with the hose.

Those were the glory days, when Markie’s and Jack’s Santa Claus lists were flush with toys, the bigger the better. You would have had to clear-cut Pooh’s Hundred Acre Wood to produce the cardboard box for the Rescue Heroes’ Aquatic Rescue Command Center. I shudder to consider the carbon offsets required to zero-out the shrink-wrap, clamshell, and corrugated poster board of the Polly Pocket! Relaxin’ Resort Rock ’n Roller Coaster Hotel. And you don’t know fire until you stuff an American Girl Kaya doll box with wrapping paper, plastic bows, and a country mile of bubble wrap, and hit it with a Zippo. I swear that blaze ended up on Google Earth.

In fact, the sheer size and complexity of those classic toys were reasons that the Burning of the Boxes was a day-after-Christmas tradition. After a midnight ’round-the-city ride to find missing C batteries for the LeapFrog, which held Jack’s attention for about 13 seconds, and the 2 a.m. phone call to an architect friend for help assembling a 600-piece interactive miniature doll kingdom, I could barely hold an electric knife to carve the Christmas ham. No way was I going to fire-marshal a backyard bonfire.

Alas, nothing good and of questionable legal status lasts forever. It’s hard to get jacked up over the puff of smoke produced by an iPhone box.

But alas, nothing good and of questionable legal status lasts forever. Over the years, the bonfires produced by the Burning of the Boxes grew smaller and smaller. Their diminishing size and BTU outputs serve as tactile metrics of the kids’ growing-up years. We went from torching head-high pyramids of Super Soaker packaging, and life-size play oven boxes to the puny crates that cradled laptops and Beats by Dr. Dre headphones. It’s hard to get jacked up over the puff of smoke produced by an iPhone box. But I’m nothing if not a traditionalist. The Christmas we gave Jack a hunting trip to Arkansas, and Markie cash for a mother-daughter trip to New York, I wrapped each handmade gift certificate in multiple boxes inside of boxes, like those nesting matryoshka Russian dolls, each stuffed with a padding of tissue paper. Flame on.

And just recently, I’ve been given a sliver of hope that these few remaining years before the kids leave the house might usher in a return to the glorious bonfires of their toddler stages. Last year, Julie and I gave Markie a giant sort of beanbag-slash-futon thingy for her college dorm room. It came in a box so big you could have played kick the can inside. When we saw it on the porch, Jack’s and my eyes lit up.

We looked at each other and grinned.

You thinking what I’m thinking?