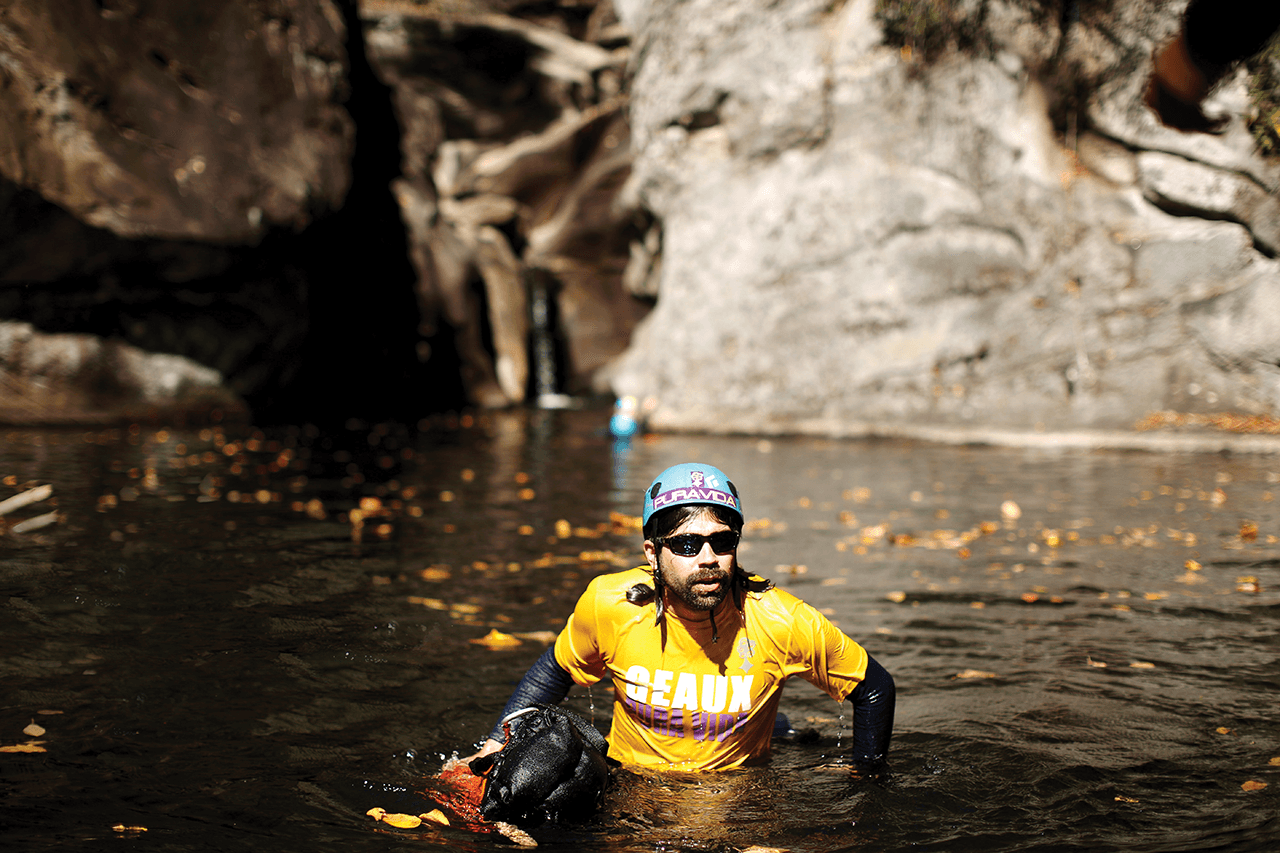 You wouldn’t know it from looking at the wide, awestruck grin on his face, but this is what Joe Moerschbaecher does pretty much every day. He owns Pura Vida Adventures, a Brevard-based adventure guiding company that specializes in a variety of trips, from backpacking excursions on the Art Loeb Trail, to climbing the face of Looking Glass Rock. But his signature adventure is canyoneering, where clients boulder hop, rappel, cliff jump, and swim their way through some of North Carolina’s most stunning gorges.

Canyoneering has long been popular in western states like Utah, where explorers traverse narrow, dry, slot canyons from end to end (think James Franco in 127 Hours), but Moerschbaecher was the first to apply those skills to North Carolina’s boulder- and waterfall-choked gorges. I was one of his first canyoneering clients seven years ago, when he ran the business solo out of the back of a well-worn minivan. Now he has a legitimate outpost in Brevard and half a dozen guides working for him. He’s spent years searching for picture-perfect gorges to explore, pioneering a number of canyoneering routes in Pisgah National Forest along the way.

“There’s so much potential for this sort of adventure here,” Moerschbaecher tells me after we make it to the bottom of the waterfall. “I think we’re just scratching the surface.” 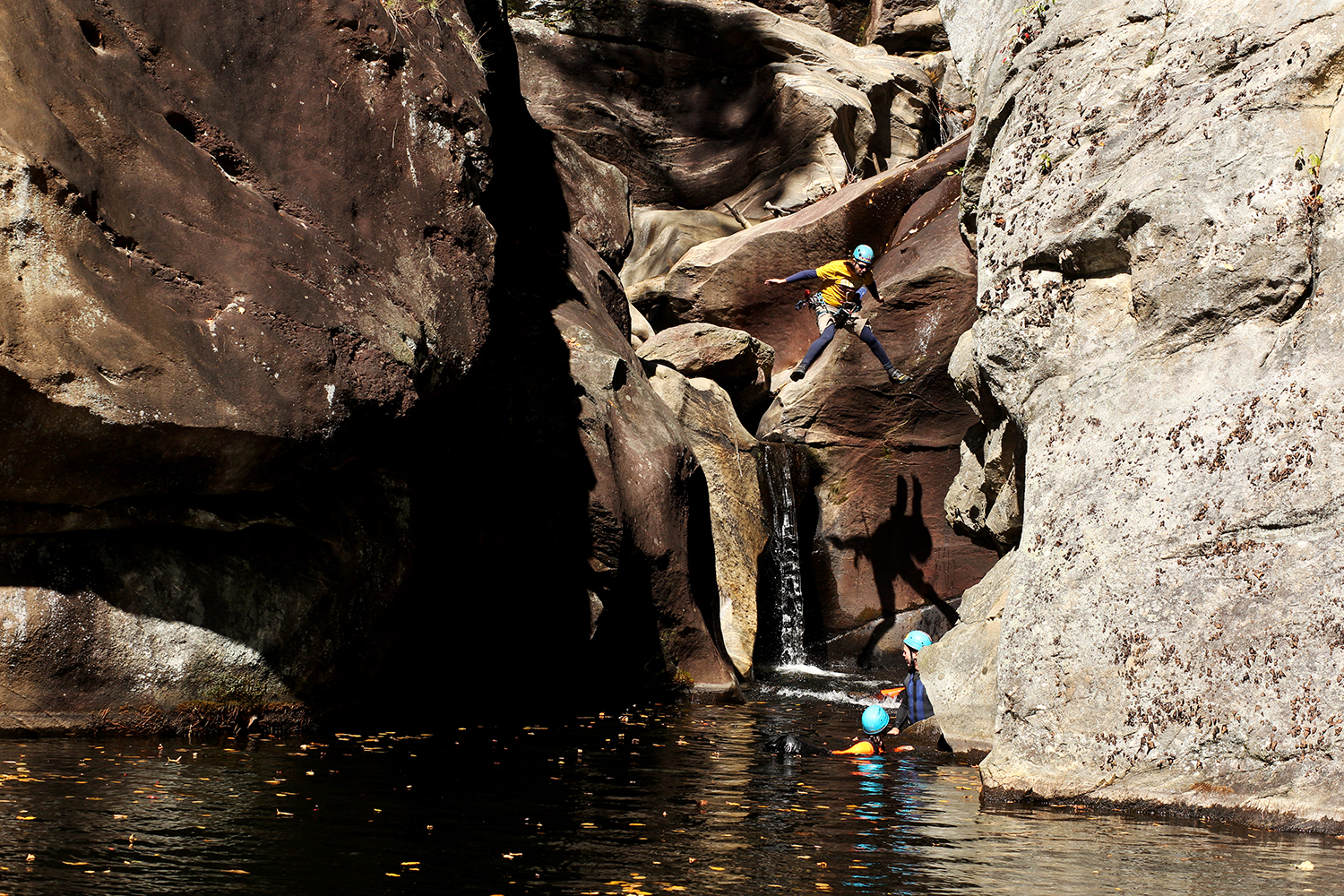 Today, six of us are scratching the surface of Paradise Canyon, a surreal mini slot canyon an hour west of downtown Brevard. Here, Wolf Creek drops 125 feet over a granite cliff, plummeting into a mess of boulders before slipping into a series of drop pools that are encased by tall granite walls. If this isn’t the prettiest waterfall in North Carolina, it’s in the running. To get from the top of the canyon to the bottom, Moerschbaecher has us rappelling the big falls, then rappelling a 15-foot drop, then taking a free plunge over the lip of the final 20-foot falls. Our exit is a cold swim through a deep pool that’s guarded by narrow stone gates. On the other side is a rocky beach baking in the midday sun.

Not a bad way to spend a Thursday, and Moerschbaecher has spent a decade carving out a career as a guide so that most of his workdays look exactly like this.

The 34-year-old has a dark beard and matching long hair, and is prone to wearing tie-dye and speaking in Grateful Dead lyrics. He grew up in the suburbs of New Orleans, where he learned an important lesson: “That I never want to live in the suburbs again.”

After high school, he fled to the mountains and Brevard College, where he ran cross-country and studied in the Wilderness Leadership program. He had a two-year stint as a raft and climbing guide in the Nantahala Gorge, and he spent five to six years as a semiprofessional adventure racer. “I brought that adventure racing mentality to guiding,” Moerschbaecher says. “Guiding multiple disciplines keeps it interesting. As a guide, I like to be entertained.” 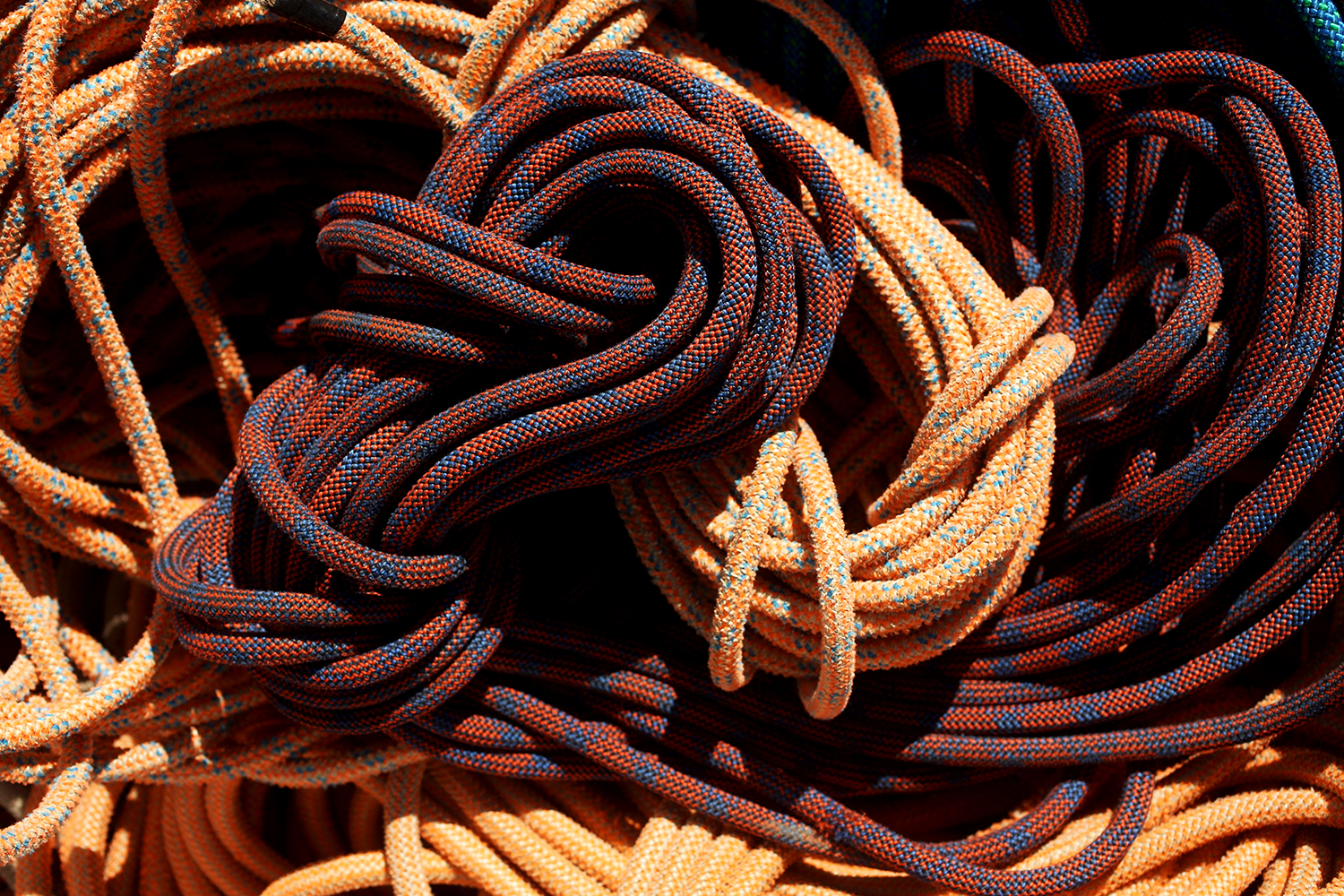 The Pura Vida outpost is decorated with topo maps, clippings from Moerschbaecher’s adventure racing days, and Mardi Gras beads, in honor of his New Orleans roots. You can buy shirts that say, “Geaux Pura Vida.” On his desk is a copy of Marketing Lessons from the Grateful Dead.

“Work’s too serious to be serious after work,” Moerschbaecher says, so if he’s not working, he’s mountain biking or kayaking or climbing. Or dancing. “When I dance,” he says, “I can get into the same state of mind as when I’m kayaking a challenging river. You can’t think of anything outside of the moment.”

We’re drying out on the rocky beach, looking back at the canyon we just navigated, and Moerschbaecher pulls out a small telescopic fly rod. He’d heard that one of the guys on the trip had never fished before, and Joe’s determined to teach him how to cast. It’s tough to fish a pool that six people just swam through, but both guide and fisherman are having fun.

Because aside from the freedom that comes along with Joe’s job is this perk: giving people a taste of his lifestyle, even if only for a fleeting moment on a Thursday afternoon.

Editor’s note: This story originally appeared in the January 2015 issue as “Wild Thing.”