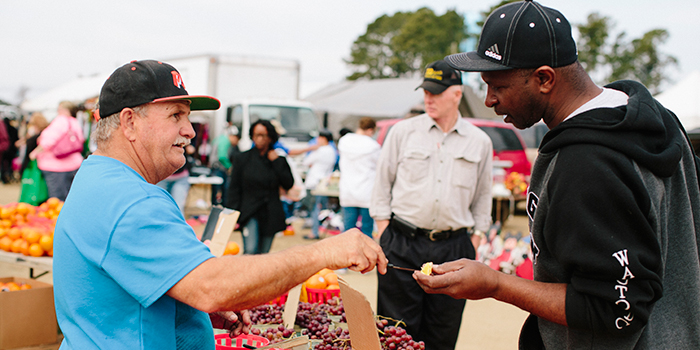 To enter the flea market at the Wells Stockyard is to become part of a wacky collage.

There are stoplights. Toy trucks. Teal high heels. When you browse antique furniture from Hickory while munching on chicharrónes, or pork skins, you experience “The Yard” as its president, Ed Bowman, has come to know it: a mishmash of the native and nonnative, old and new.

It’s difficult for Bowman to think of the strangest thing he’s seen in this hybrid flea market/farmers market. You assume that, during the 40 years he’s been here, he’s seen it all. But Bowman’s certain — absolutely certain — he hasn’t. Turnover is constant.

However, Bowman does recall walking around the Stockyard as a kid in the ’50s, when the flea market was just a dirt square rented out to one guy, and Bowman’s father was part owner (other part-ownership belonging to the Wells family).

In those days, shoppers showed up early and pulled out their wallets not for flea-market finds, but for the livestock market, where a horse-and-mule auction had taken place weekly since the Stockyard’s 1956 founding.

Though livestock is still a Stockyard feature — the goats and sheep draw a crowd — it’s impossible not to be consumed by the massive toy trove that is the flea-market portion of the yard.

Right around noon is busiest. Locals come during their lunch break to chat with friends. Some go to the concession stand for a taco or a hot dog. Some pick up a basket of fresh tomatoes. Around the same time, mechanics come to check out the best deals on parts before heading back to work.

The locals are never alone — especially on a nice day. Hundreds of people will fill the yard, Bowman says. Any given Thursday and Saturday can bring up to 1,000 visitors. “It’s a sight to see.”

Comanagers Mark Pope and Mike Fussell can think of a few memorable finds among the 60-80 vendors (a number largely dependent on the weather).

There have been ax handles. Funnel cakes. Live rabbits. “It’s stuff you won’t find anywhere else — often, not even in the grocery store,” Pope says. “That’s the draw — people may not buy a thing, but they love to look.”

This could all be sensory overload — the bright blue pitchfork, the feel of worn wood on an antique picture frame, the smell of boiled peanuts trailing across the yard. By the time shoppers get back to the car and buckle in, it’s already difficult to pick out the details of what they’ve just seen and smelled and touched.

The wonder doesn’t seem to have worn off for Bowman, Pope, and Fussell. They still puzzle at the staggering diversity of items — vintage perfume bottles and biker belt buckles. A newspaper from 1991 and piles of cactus leaves. To visit the Stockyard is to take a trip through a dozen worlds. It’s experiencing a hundred fleeting impressions. It’s a single portrait made of a thousand tiny images.