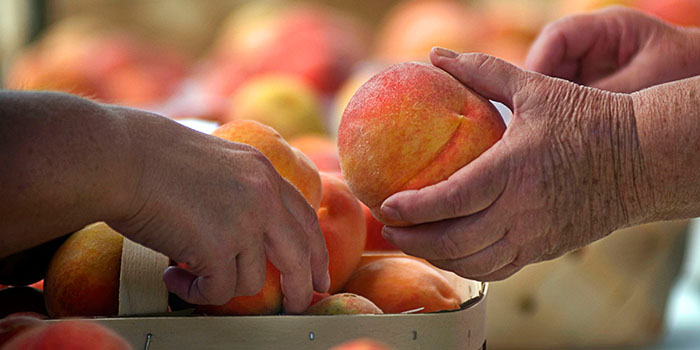 Editor’s Note: This story first appeared in the July 2014 issue. For current information about the Candor Peach Festival, visit townofcandornc.com.

All year, I wait for the peaches. I walk into the grocery store and give it a quick scan to see if they’re here. When they’re not, I keep it cool. Roll the cart right along. Settle on a pear — kind of soft, also juicy — or a few apples — right size, right shape to fill my palm. But I know: I’m settling.

Growing up in Georgia, the peach state, had its side effects. Bumping along in the backseat through a tangled web of streets called Peachtree, it hardwires the brain. I fantasize about a peach of all seasons. I stand by what my dad has always said, with his face furrowed in critical mode: “There is nothing better than a good peach and nothing worse than a bad peach.”

Peaches are unabashedly themselves from the get-go. The right one is an explosion of goodness that can ruin your standards for life, leave you looking at an empty section in the produce carts again with a thought you can’t get over, an answer that you need: Can’t this be more than summer love?

I like these people already. They’re long-term invested. They’re critics. They know their Johnson’s Peaches from their Chappell Peaches. Their yearlong labor gives them an outlet for their affection, and grows it. Now they’re telling everyone to come on over because they have to share this right, good thing they’ve found, and I’m right there with them, waiting patiently for thirst to reach the rest of the state, where thoughts of a ripe peach on a summer day are just beginning to give the mind over to taste, and taste to something like love.