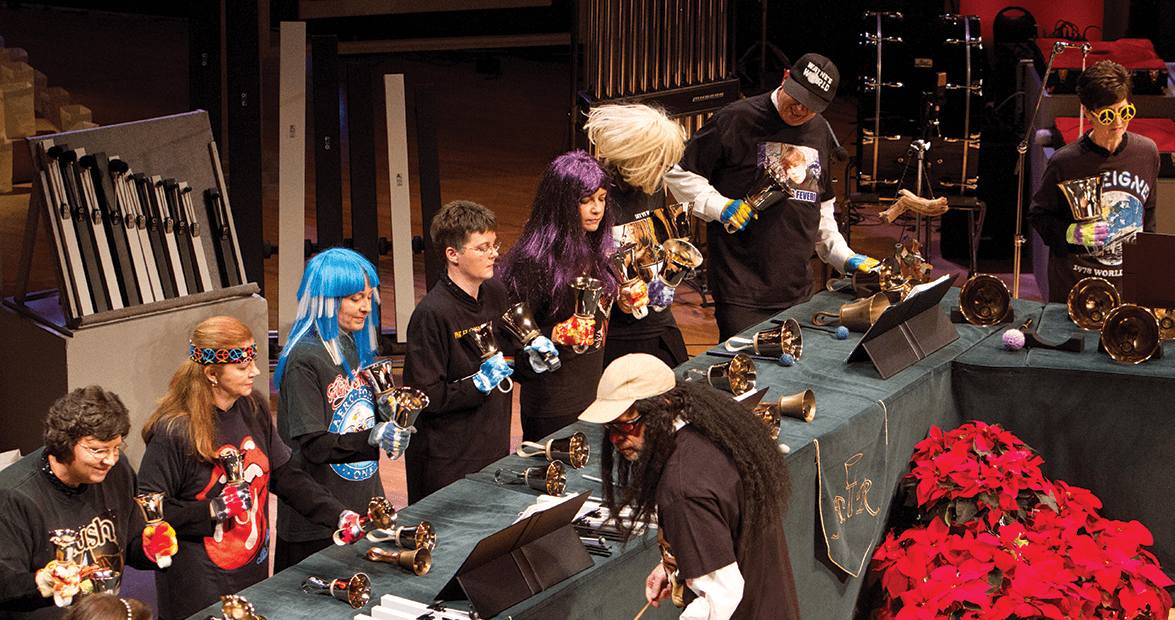 The Raleigh Ringers are getting fidgety. Just before their weekly practice, they’ve got hands on hips. They’re cracking knuckles. They’re twisting wrists. They’re tapping the table. With both hands animated, director David Harris talks the handbell choir through a list of announcements, using his fingers to tick off each item, including the news that the group has been nominated for a regional Emmy award. Then Harris swoops his hands up, tips his chin up — the motion they’ve been waiting for — and 18 pairs of hands follow.

In the chaos of sound and movement that tumbles out, it’s hard to mentally process the first measure of the waltz from “Serenade for Strings.” Sitting in front of the choir is like watching the cogs of a machine, or peering inside a piano while it’s being played, or witnessing an octopus doing the wave. Hands up, hands down. Notes countering motion.

In order to understand what you’re hearing, you focus on one ringer — maybe the guy with the gargantuan bell the size of a large lampshade. Or maybe, at the opposite end of the table, the gal with the tiniest bell, so itty-bitty it deserves to be called the Tinker Bell. But when you single out a player, the action looks totally random. He plays a few notes here. She plays a few notes there. It’s measure who-knows-what, they’ve turned so many pages, but you’re starting to get it — what makes this show unlike any other musical performance on earth: It’s taking 18 people to play one instrument.

“When someone is missing, it’s like taking a key off the piano,” Harris says. So the Raleigh Ringers’ rehearsal attendance is as close as it gets to mandatory, which — aside from the inside jokes they exchange between songs — makes the Ringers a serious group. Many times since the choir’s founding, people have moved to Raleigh solely to become a Raleigh Ringer. Most members started out when they were kids, playing in church choirs alongside ringers of varying skill levels, and wanted a bigger challenge, a place to play nonsacred music. The common initiation experience seems to go like this: A new member saw the Raleigh Ringers at a church in Georgia. They heard the Raleigh Ringers perform during intermission at a Carolina Hurricanes game. Or they went to a local workshop at the Ringers’ practice space behind the Sonic Drive-In on Atlantic Avenue. They met a Raleigh Ringer, and they were starstruck. Because in the world of handbells, our Raleigh Ringers are the elite. 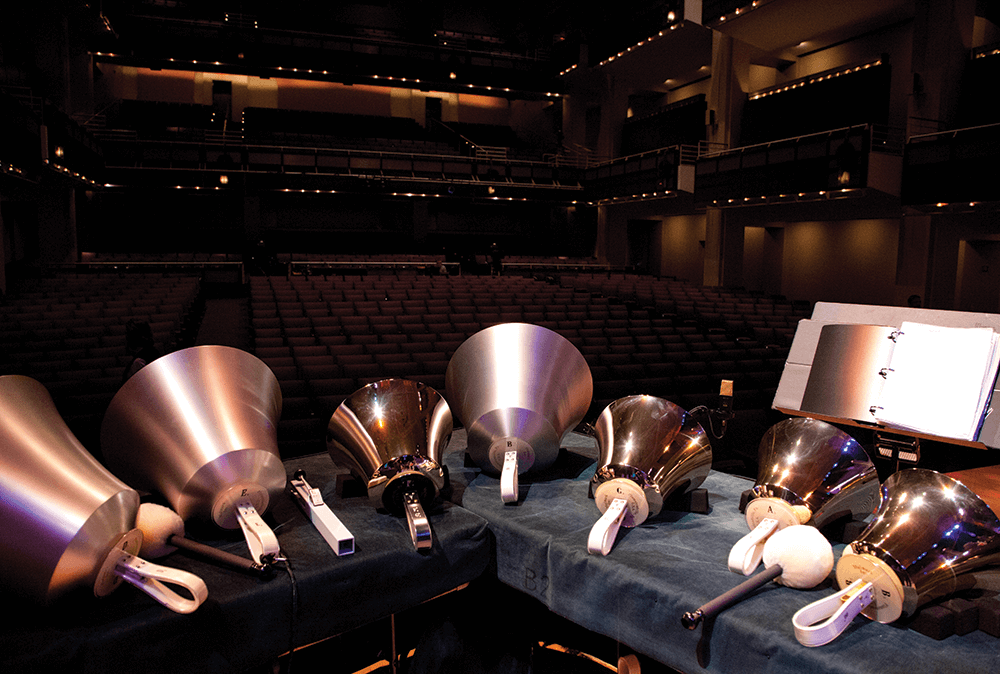 The Raleigh Ringers currently own 361 pieces of handbell equipment, the most owned by any performing ensemble in the world. At concerts, the bells are displayed on stage; afterward, audience members are invited to try them out. Find a list of upcoming performances at rr.org. photograph by Mark Manring

You’ll know them by the tie-dyed playing gloves and the wigs they put on when they unveil their latest classic rock piece — a sort of homage to the Ringers’ big break in 1990, when a North Carolina radio station aired their version of “Stairway to Heaven,” and the cover gained instant popularity. Yes, rock ’n’ roll on handbells. Versatility is the Ringers’ signature. “Flight of the Bumblebee,” “Dueling Banjos,” and “Hotel California” find their way into the same program. And no, these pieces weren’t originally written for handbells. But if the Raleigh Ringers want to play a song, they’ll commission the score (they’ve commissioned more than 125 pieces for handbells so far), and they’ll pick up some mainstream fans along the way.

This is the part of being a Raleigh Ringer that Harris loves: programming — putting together songs that take the audience down a path. As a member of that audience, you let him. You consent to traveling with Zeppelin one moment and Mozart the next because they’re united by a sound that’s as original and pure as music can be. Before 18 pairs of hands drop down, you close your eyes and let ’em ring.