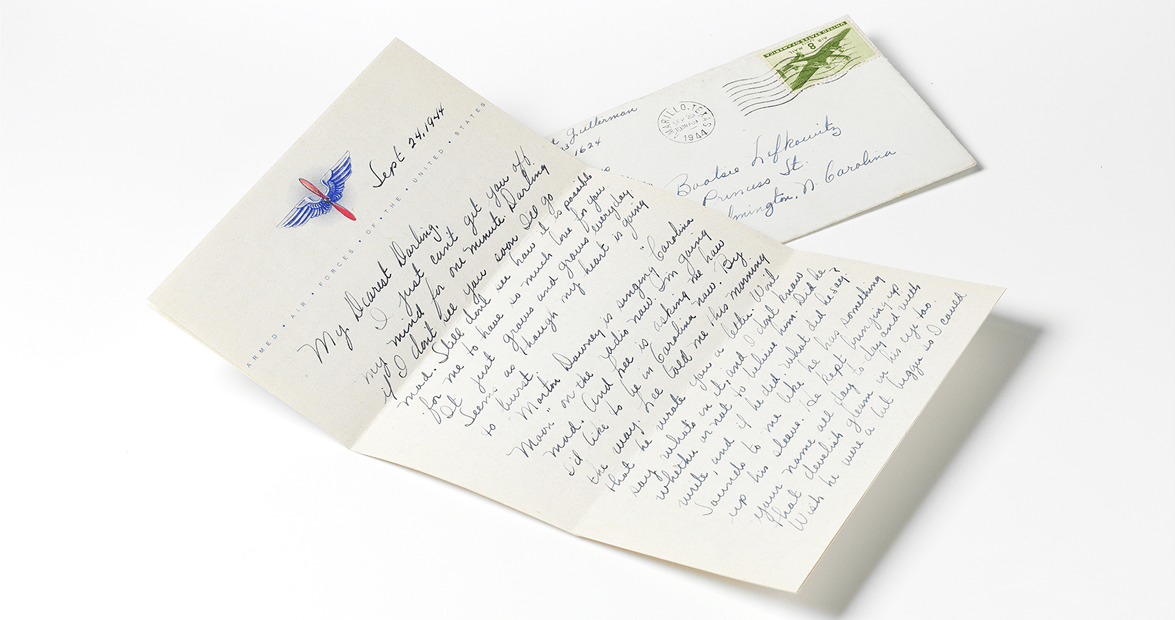 He was going home, to Pennsylvania. She was going to New York, to visit a friend. He’d glimpsed her in the station, bright red lipstick on a full mouth, a mass of black curls. Now she sat beside him on the northbound train, struggling to remove her galoshes, and he leaned to assist her. He was in the U.S. Army Air Forces. She clerked at her father’s store, Dave’s Jewelry, on Front Street in Wilmington. He was Harold Gutterman. She was Bootsie Lefkowitz. They were both 19. The date was February 1, 1943.

On February 6, less than a week later, the first letter arrived for Bootsie from Harold. And though Harold would not lay eyes on his chance beloved for more than two years, the letters continued to arrive, five and six times a week, for the next three years.

Here’s the kiss I never gave you. X. As a pilot trainer, Harold traveled from base to base, his transfers reflected in the postmarks: Flagstaff, San Antonio, Amarillo, Springfield, Monroe, Burbank. I know that it gets tiresome not to see someone you write to, but I can’t get a furlough. On every envelope, he affixed stamps upside down — a time-honored signal of love. Inside, beneath every gummed flap, he wrote S.W.A.K. (and once, S.W.A.G.B.K.). My darling Bootsie. Here’s a big big kiss for you, darling. Front and back, on vanilla parchment, military stationery bearing golden eagles, or flimsy airmail sheets, every missive was a profession of adoration. On September 19, 1943, underlined for emphasis, I love you and always will. And a single day later, September 20, 1943: Wait for me.

September 24, 1944: I still don’t see how it is possible for me to have so much love for you. It just grows and grows every day. Seems as though my heart is going to burst. Morton Downey is singing “Carolina Moon” on the radio now. I’m going mad.

There exists, surely, no more striking, universally understood symbol for longing than the moon. That pearly orb in a black velvet sky serves as a bittersweet beacon to parted lovers everywhere, every age. Each generation has its romantic song in which the moon looms. But for Bootsie Lefkowitz, living on a North Carolina beach, it was that Carolina moon silvering the waves like mercury that she wrote about to Harold. And he, of course, wrote back. I just can’t get you off my mind for one minute. I love you, I love you, I love you 1,000,000,000 times.

Even as toddlers, we understand yearning put to music. “I see the moon, and the moon sees me/Moon sees the one that I want to see …” the childhood ditty singsongs. You talk about moons in Carolina. Makes me wish I were closer to you. And Darling, someday I will be, Harold wrote. The constancy of that magnolia-tinted moon, attainable by no one yet available to all, comforts and reassures us when we miss someone we love, or lost, or long for. Who hasn’t said, “Look up at the moon, and you’ll know I’m looking at it, too”?

Darling, if ever I was sure about anything, I’m sure of my love for you. Close your eyes and imagine that my arms are holding you tight. The entire trove of letters — an epistolary romance — was written during the war, a time that limited access to correspondence and imposed distances, and hardships, and years of yearning. And yet — If it weren’t for the war, I’d never have met you. And what would I be then? A guy without love. The final letters are dated April 4, 1946. Letters, plural, because Harold wrote Bootsie twice that day. Seven days later, on April 11, Bootsie and Harold married in her sister Elsie’s home on Sink Street in High Point. They enjoyed 49 years together. Harold died in 1995; Bootsie died last year. But on that day 68 years ago, somewhere high above them, no doubt, that man in the Carolina moon winked.