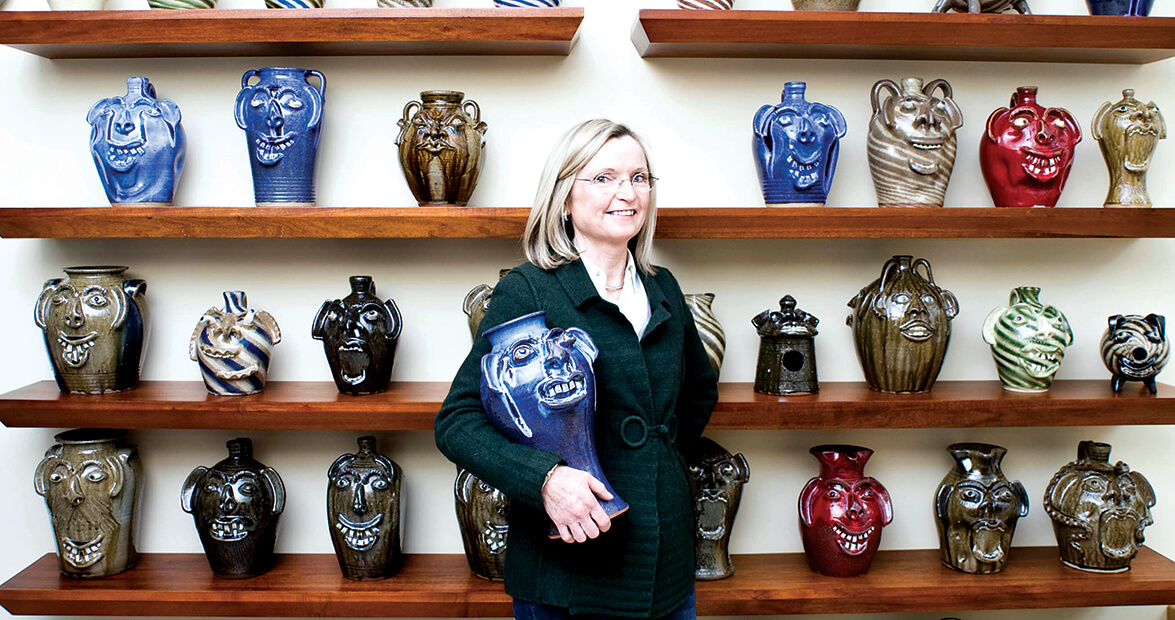 From every corner of Diane Aurit’s home office, whimsical faces on pottery jugs stare back at her with bulging eyes and bared teeth. Most are scary-looking, or devilish, or angry. But there’s an occasional happy face in the crowd, laughing or winking.

As Aurit tenderly touches each piece of pottery, she tells its story, describing the intricacies of the alkaline glaze, or the personality of the potter who created it, or the morning she drove far out into the Catawba Valley countryside of western North Carolina and saw the face jug for the first time. It sat upright in the grass on a potter’s lawn, and she knew she had to have it.

“There is nothing to describe the fun of going to a kiln sale, where you actually meet the potter at his home, where he’s humbly spread his pieces out on the lawn,” she says. “At about 9 o’clock, you get to walk around and check out all the pots. At 10, they hand out numbers, all mixed up in a jar. You pick a pot according to whatever number you draw. It’s like a scavenger hunt or game. Can you find another wonderful piece to add to your collection?”

If you told Aurit a few years ago that she would spend thousands of dollars and devote hundreds of hours to Catawba Valley face jugs, she would never have believed you. She first saw a face jug in 2005, shortly after she moved from California to the Lake Norman area north of Charlotte. She thought it was ugly, much too gruesome for her tastes. “I like pretty pottery,” she told the gallery owner.

But Aurit has always been drawn to traditional handmade art and architecture. In California, she treasured the original tile and wood of older homes, and she helped with the preservation of Craftsman-style houses in Pasadena. After moving to North Carolina, she was eager to learn about the traditional arts in her new state. The more she learned about face jugs, the more intrigued she became.

“What attracted me to face jugs was the beauty and earthiness of the glazes, and the fact that every piece is unique, just so charming and whimsical,” she says. “And then there’s the historic process the potters are honoring when they create these pots.”

Aurit appreciates the fact that the methods Catawba Valley potters use today are the same methods German settlers used in the early 1800s when they made utilitarian jugs and pots for storing food. Potters still dig clay from swampy areas near the Catawba River. They still mix their own glazes from beaten glass, ashes, and slick clay — a process dating to the Han dynasty in China more than 2,000 years ago. And they still fire their pieces in wood-burning kilns.

“I am from the hippie generation,” says Aurit, who is 58 and owns LKN Realty, LLC. “I’m a child of the ’60s, and I threw pottery when I was young. I’m fascinated with the whole idea of the way potters work, the fact that they’ve kept alive the traditions, the gorgeous glazes, and the beautiful work.”

From jug to jug, shelf to shelf, wall to wall, her office overflows with face jugs, grouped according to the potters who made them, including Steven Abee, Don Craig, Kim Ellington, Charlie Lisk, and Joe Reinhardt. Aurit met each of the artists. She knows the history behind every piece of pottery. And that knowledge helps cement her bond to her adopted state.

In a place of honor on a window seat are museum-quality pieces by the granddaddy of Catawba Valley potters, Burlon Craig, who is credited with reviving the nearly lost art. He began experimenting with face jugs in the 1970s, attaching small pieces of clay onto jugs in the shape of eyes, large eyebrows, noses, ears, and eerily grinning mouths. He made teeth from broken bits of ceramic plates. His face jugs were considered folk art, and their popularity spread.

Craig died in 2002 at age 88, but not before he passed on his techniques to younger potters, including his son and grandson, who still use the drippy alkaline glaze that makes Catawba Valley pottery unique. In December, Aurit paid the most she’s ever spent on one piece of pottery — $2,600 for a beautifully proportioned Burlon Craig jug that’s distinct because it has two faces — one on each side.

“I had expected to buy a different piece,” she says. “I walked into the auction and saw this piece, and the glaze was so extraordinarily beautiful, with variant shades of green. I knew that was it. The other pieces didn’t talk to me the way that one did.”

The more pottery Aurit collects, the more sophisticated and pickier she becomes. Some of the earliest pieces she bought, she has since sold to other collectors. “I could have hundreds of pieces,” she says, “but each piece has to have meaning to me.”

One of her favorites, a face jug by Charlie Lisk, sits on a top shelf in her office. It has lively green and white stripes and frog-like eyes. Below it is another favorite, also by Lisk, a startlingly blue vase shaped like a woman’s hourglass figure with big lips and a big nose. “Charlie has a wonderful sense of humor,” Aurit says, “and all his face jugs are happy. They make me happy.”

She estimates that she has spent about $36,000 on 240 pieces of pottery since moving to North Carolina. She keeps them on display, most in her home office, with a few select pieces throughout the house. On her dining room table sits a dramatic snake jug made by Burlon Craig’s son, Don. Two orange-and-black diamondback rattlesnakes wrap around the jug, their blood-red, forked tongues ready to strike.

“I love the fact that the snake comes off of the pot in such a realistic way, almost as if it’s alive,” Aurit says. “And then to have the detail of all the scales and fangs, that to me is beautiful.”

By the fireplace is a face jug by Kim Ellington, who studied under Burlon Craig. It has a look of childlike innocence, realistic eyes staring off into space. On the mantel above, a Picasso face jug made by Don Craig is so named because of the cockeyed placement of its features.

“It’s great fun to show off the pottery,” Aurit says. “I keep most of the face jugs in my office because my husband appreciates them, but he doesn’t love them.”

Many people think of face jugs as Southern, and conventional wisdom holds that the ugly-looking faces were made to scare children away from moonshine or to scare evil spirits away from African-American graves. But Charles “Terry” Zug III, a retired folklore professor at the University of North Carolina at Chapel Hill and author of Turners and Burners: The Folk Potters of North Carolina, points out that potters made face jugs as far back as the Roman Empire. Face jugs are simply a form of artistic whimsy, he says. “They are just a tiny part of the whole, but they get so much emphasis because they are different. They’re fun.”

Aurit loves being in her home office because of that. “While I’m working on my computer,” she says, “it’s so much fun to look up and see all these little faces looking back at me.”

To learn more about Catawba Valley pottery and the area’s kiln sales, go to cvpottery.com.