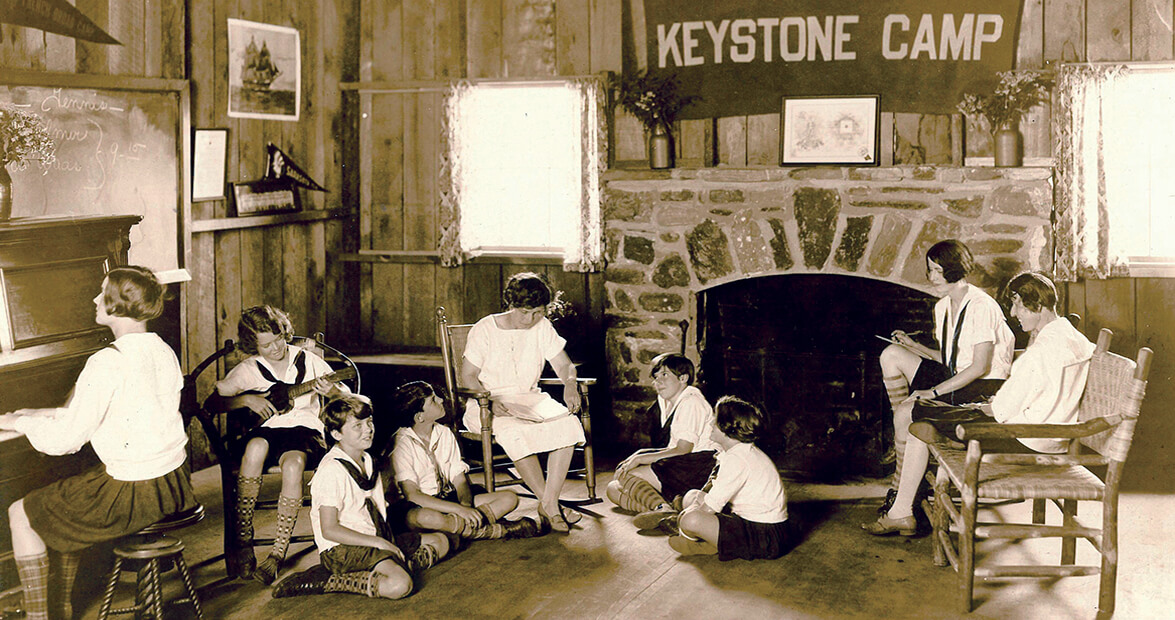 EDITOR’S NOTE: This story was originally published in July 2016.

Summer after summer, the rising bell at Keystone Camp has rung at 7:30, and campers have filed down the hill and gathered ’round the flagpole for the ceremony that starts the day, as revered today as it has been for over 100 years. As it has been since two young women shared a dream: that girls should be empowered to explore the world outside the confines of their parents’ homes.

When Fannie Holt and Florence Ellis, natives of Jacksonville, Florida, envisioned their summer camp for girls, the Northeast was already home to several. But the idea was still a novelty in the Southeast.

Holt and Ellis first considered a camp for girls while running a day program for St. John’s Episcopal Cathedral at an estate called Keystone Bluff. There, Holt and Ellis spent their time swimming, picnicking, and playing lawn games with young ladies of the parish. What if, they wondered, such an opportunity could be afforded to many girls over many summers? Holt and Ellis decided their camp should be a place for:

• a good time — fun,
• a chance to learn new things,
• new friends and companionship,
• good health and a stronger body,
• a change of environment with freedom to explore, and
• recognition from “associates.”

Keystone Camp was named in honor of their inspired summer setting, and also as a symbol of their shared ideals, as a camp history explains: A keystone is a bridge between two columns. In the same way, Keystone serves as a bridge between childhood and adulthood, as it has for generations of camp-goers.

Keystone is the oldest private summer camp in the Southeast. With the exception of a camp “recess” during World War II, Keystone has welcomed hundreds of girls and has been run by the same families during all that time.

The camp’s early years were nomadic: It was first located in Fairview, then in Bryson City, and then at Deer Lake (now Deerlake Village) in Brevard. By 1920, the founders had secured the modern-day location for the camp, purchasing a 40-acre site bordered by Cashiers Valley Road (formerly Toxaway Road). A stream bisects the property and runs up a steep valley ridge; a large mountain spring at the top once provided drinking water to campers and filled a small swimming lake, to which Holt and Ellis added a diving platform and a long slide. 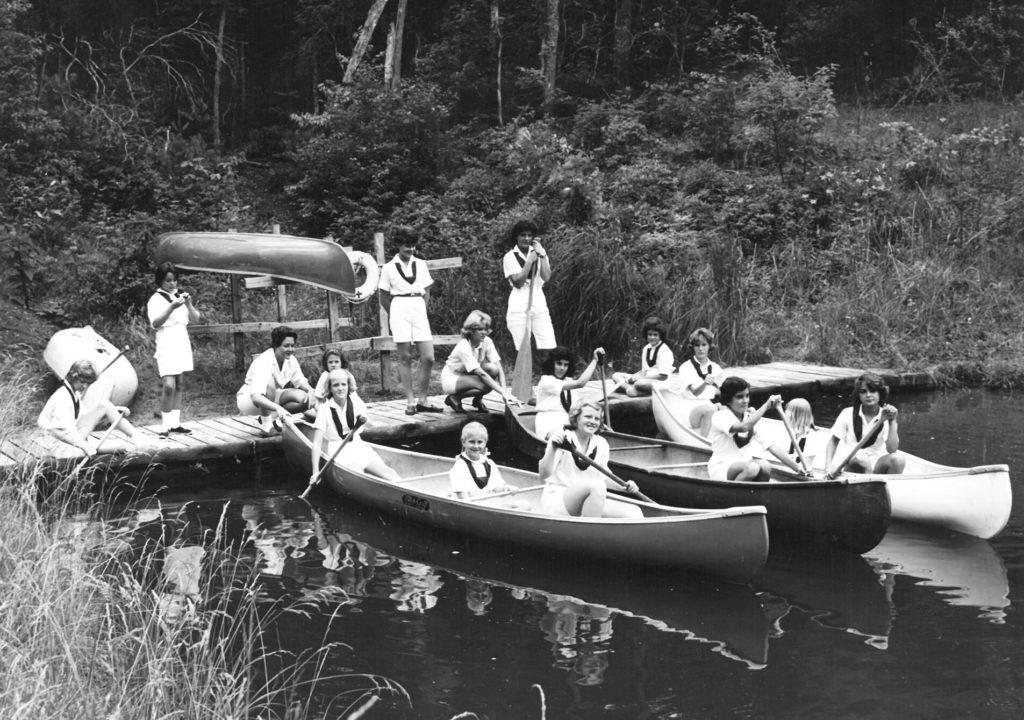 Keystone’s founders would be pleased that activities like canoeing and horseback riding are as important to the camp now as they were decades ago. photograph by Keystone Camp

The first building constructed was a lodge, a rustic spot with a stone fireplace, raw wood beams, and wood floors. There, girls reclined, perused a modest library, and held impromptu recitals at a small piano.

During those early years, there were no cabins, as there are today. Instead, girls slept in 18 tents placed strategically around the central camp.

Reservations for camp were made by telegram, and Keystone’s reputation spread throughout Holt and Ellis’s home state of Florida and beyond, with campers arriving from North and South Carolina. Camp lore tells the story of one determined camper who, when told the camp was full, made the trek to Keystone anyway. Legend has it, they made room.

Not coincidentally, perhaps, Keystone Camp took shape during formative years for women: It opened four years before the 19th Amendment granted women the right to vote.

The young women who came to Keystone had formative experiences of their own. Holt and Ellis believed in the power of rigorous outdoor activity to help each camper reach her fullest potential.

For over a century, campers at Keystone have spent their days splashing and swimming in the lake, learning sportsmanship on the tennis courts, and bonding with horses as part of the equestrian program. By the end of the 1920s, horseback riding was a required activity at Keystone, in part because it taught campers an important life lesson: Always get back on the horse. The “Bit-the-Dust Club” made falling off the horse — and getting back in the saddle — a point of pride. 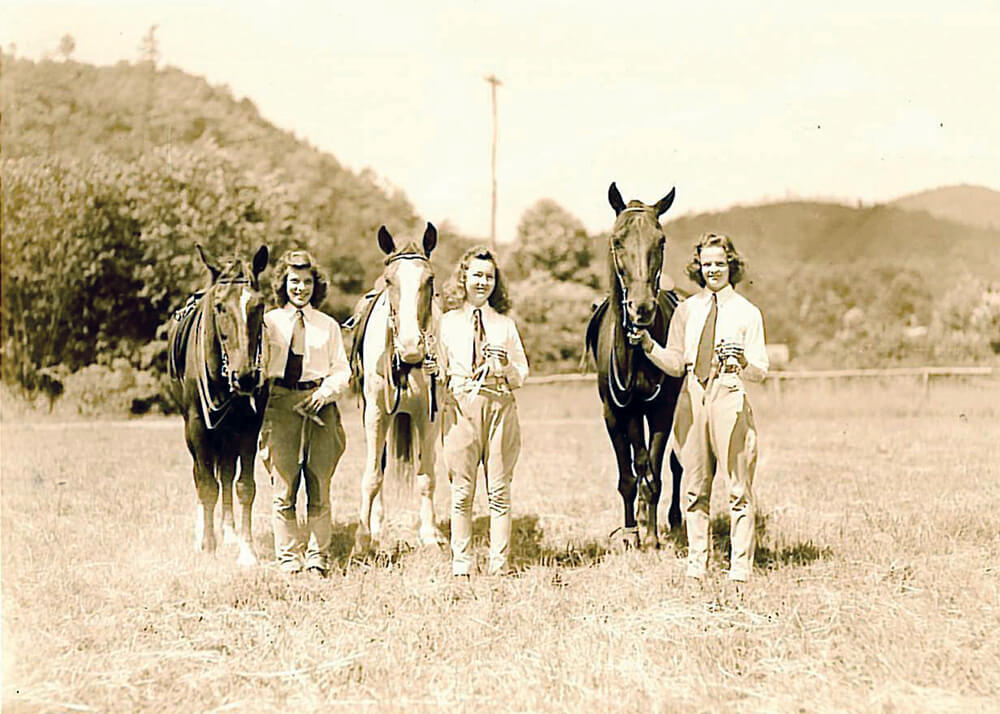 By the end of the 1920s, horseback riding was a required activity at Keystone. photograph by Keystone Camp

Campers got information about activities and other camp goings-on from the Kamp Key newsletter, which debuted on two typewritten sheets in 1918. By the 1930s, the Kamp Key had become a mainstay, featuring hand-drawn covers, current activities, notable accomplishments by campers, and a column called “Advice for the Lovelorn,” written by a “Miss Nona No It All,” who, though anonymous, bore a distinct similarity to Fannie Holt.

It is in this happy and healthful out-of-doors life that real Camp Spirit abounds.

Holt, who ran the camp on her own after Ellis’s death in 1926, is credited with serving campers in thoughtful ways — hiring professional dieticians to prepare meals, notable riding instructors for horsemanship lessons, and university-level instructors to lead nature courses. Campers, having always been grouped by age, still go by the names Holt designated for them. In 1930, inspired by the “winsome little people of the woods” in folk tales and mythology, she declared that the oldest girls would be known as Dryads, the 11- and 12-year-olds would be called Pixies, and the youngest girls would be known as Elves.

Despite the whimsical nicknames, all the girls, from Elves to Dryads, were held to the high standards laid out in a 1920 brochure: “Regular hours for retiring, rising, care of quarters, recreation, exercise, meals and rest stimulate punctuality; and rigid inspection both personal, and of the tents, makes neatness and orderliness habitual. It is among these surrounding influences in this happy and healthful out-of-doors life that real Camp Spirit abounds, and Camp Spirit stands for nothing short of the best in personality, sportsmanship and character.”

That didn’t mean there wasn’t time for fun. Campers in the July session at Keystone looked forward to celebrating three major holidays: Independence Day, Fannie Holt’s birthday, and, starting in the 1930s, Christmas in July, which included caroling around a decorated pine tree, throwing cotton balls, and a visit from Santa Claus himself.

By the 1960s, the Pullman cars that had delivered early campers were phased out. As newly expanded highways and roads eliminated railway routes, girls arrived instead by chartered bus or by car.

Yet most traditions have persevered. The camp is owned by the great-great-niece of founder Florence Ellis. Campers still get their news from the weekly Kamp Key. And at the start of each day, as sure as the sunrise, Keystone girls gather for the raising of the flag.