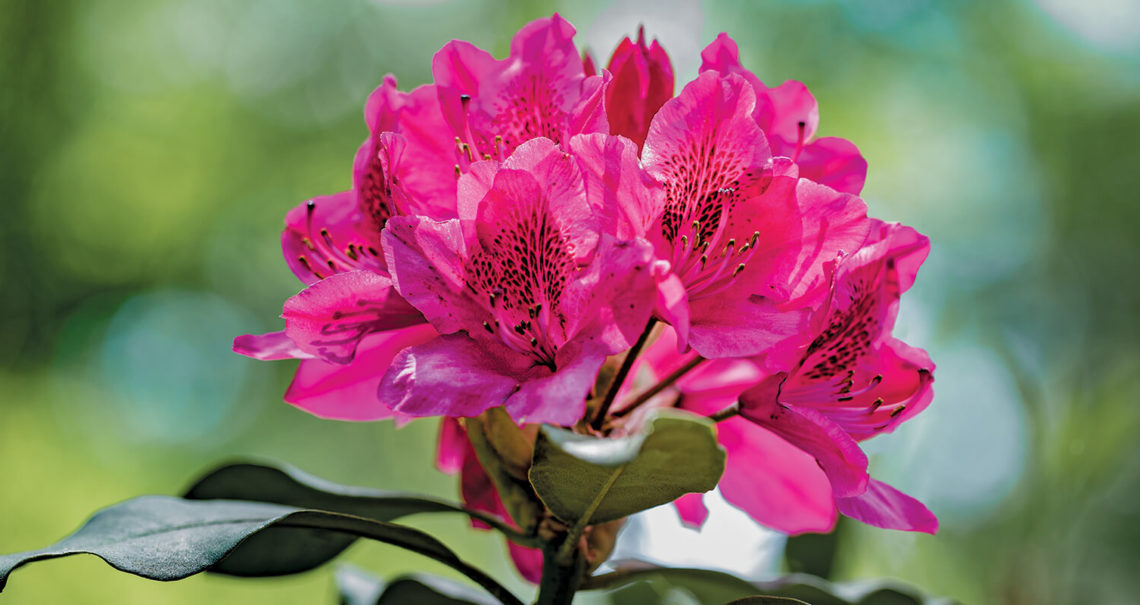 Tricia Ockinga isn’t a formal sort of person. She wears her sun-kissed hair swept into a cap at work, and her office is a greenhouse attached to a garage. But when it comes to trimming formal hedges, she’s a natural. This is, in a roundabout way, how she became caretaker to the third-largest collection of Dexter rhododendrons on earth.

There are more than 1,000 species of the Rhododendron genus, most of them evergreen. Many are concentrated in China and the Himalayas, but Appalachia has a native share. It’s not clear how Charles Owen Dexter of Sandwich, Massachusetts, became infatuated with the plant in the 1920s. But when his family decided to move their textile business from New England to Buncombe County, Dexter bid them farewell and bought a Northern farm, declaring that he was going to stay behind and dedicate his life to hybridizing rhododendrons.

He spent years traveling the world by steamer ship to gather varieties of seeds that surpassed expectation, and with his global finds, he set about creating hybrids in a process that proved to be more art than science. His work wasn’t for profit; it was undertaken to produce wonder and joy as the realization of his personal passion. In time, Dexter became famous among plant breeders.

[Related: Three experts share their tips on how to grow the best rhododenrons.]

Meanwhile, Dexter’s uncle and his wife — parents of an infant, Charlie Owen — were aware of what their relative was up to. After they’d established their estate house in Asheville’s Biltmore Forest neighborhood, they decided to surround it with Dexter’s global hybrids. It was a laborious task that required hauling plants to Asheville by train. But Charlie, now 84, believes it was worth it.

There are, today, only three large collections of Dexter rhododendrons in the world. One on the du Pont family estate, one at Heritage Museum and Gardens, which was formerly Dexter’s farm in Massachusetts, and one in Charlie Owen’s backyard.

Tricia Ockinga and Charlie Owen admire the rhododendron that was Charlie’s mother’s favorite. “I call it Her Majesty,” Tricia says. “She’s queen of the garden because she’s always loaded with blooms, and the fragrance is heavenly — almost like jasmine and orange blossoms.” photograph by Charles Harris

Charlie still lives in the house he grew up in, surrounded by the gardens his parents planted. Dexter is his middle name, literally. And plant dedication apparently runs in the family.

When he first met Tricia, more than a decade ago, she had only just learned that a tulip came from a bulb. But the aspiring horticulturist was gifted at shearing Charlie’s formal hedges — approaching them as a sculptor might. She did a better job than anyone he’d ever employed, and she did it with heart. So Charlie hired her as staff gardener. Under his watch, she has since spent the majority of her waking hours among Dexter rhododendrons.

Charlie used to work alongside Tricia: He liked planting tomatoes and tending the gardens. Now, his feet are a bit unsteady. He mostly wanders his driveway to look at the rhododendrons near the house. On a recent warm day, he took a walk with Tricia to inspect new growth.

“These plants,” Charlie says, “are some of the most important things in my life.” He takes a leaf in hand and says, “We don’t have to do much to them around here. The climate’s right.”

Tricia says, “That’s true, but I fertilize them. I take soil samples. I love them just like you do, Charlie.”

“Anybody who didn’t love these would be a fool,” Charlie says, blue eyes smiling.

Charlie has never sold cuttings, despite having interest from places as prestigious as Biltmore Estate and the U.S. National Arboretum, which has dispatched curators to his yard to examine his rhododendrons. “This is our heritage. It isn’t for sale,” he says. “These plants are family.”

“I like to come out and count the buds as they show up. It’s in my blood, watching these plants.”

Tricia has grown to think of Charlie as family, too, a father figure. When he travels, he brings her presents from roadside stands. Strawberries. Peaches. Years ago, when she was going through a difficult divorce, he bought her a plane ticket to visit her mother. She could cry, even now, thinking of the kindness. But to each other, Tricia and Charlie don’t really talk about things like that. They talk about perennials and annuals, tomatoes and orchids.

In May, the rhododendrons are in their full spring glory. Everywhere he goes, Charlie invites people to come ’round his neighborhood to see them. When the garden is in full bloom, Tricia has witnessed people almost fall off bicycles, straining to get a better look at the color explosion. Occasionally, she hears strangers make exclamations as they fumble in the face of awe. Without fail, their response is something along the lines of: Wow.

Charlie reaches out to touch the plant’s newly formed buds. “I like to come out and count the buds as they show up,” he says. “It’s in my blood, watching these plants. My father’s last words were about how he wished he could see them in bloom one last time. I’ll never forget it.”

He points out the smallest bud he can find. “Look at that,” he says. “They’re coming in nicely.” Each one holds the hope of future beauty.

When Charlie goes out for the morning, Tricia begins her rounds in the garden. She enters a rhododendron tunnel and approaches a plant so large that she sometimes refers to it as “The Big Bad Mama” or “The Queen of the Garden.” To Charlie, it’s simply “My Mother’s Favorite” because of the way his mother doted on it.

Charlie grew up in the house he lives in now, alongside the rhododendrons his mother planted. At more than 80 years old, these are some of the oldest in the garden. photograph by Charles Harris

Dexter rhododendrons often don’t have names, and many of Charles Dexter’s varieties have been lost to time. He didn’t name the seedlings he gifted to friends, and he did not take meticulous notes. After his death in the early 1940s, enthusiasts tried to root cuttings taken from his farm, but many didn’t make it; furthermore, cutting privileges weren’t given out so freely. In the 1960s and 1970s, Heritage Plantation, as it was then called, began an effort to log and categorize what they could. Still, there are a few Dexter varieties available to the public. Most notable among them is Scintillation, which was propagated by the breeder’s admirers after his death and registered in 1973.

In general, Charles Dexter and his plants remain enigmas. But in Charlie’s yard, it’s clear that a rhododendron without a name smells just as sweet. “This plant might not have an official name,” Tricia says, staring up at the largest rhododendron in the Owen collection. “But she’s magnificent.”

Dexter created hybrids fragrant enough to be detected from 10 feet away, with hints of peppermint, spice, and honeydew. In addition to scent, Charlie’s ancestor had an interest in color. In season, there are pink blooms. There are pale yellow ones and deep purple ones. “I know every one of these plants as an individual,” Tricia says. Even when the plants are not flowering, she can appreciate their varied leaf shapes, imperceptible to an untrained eye. And she can see every stage of their cycle, as a parent can still recognize their baby in a fully grown child.

Recently, concerned that Charlie was no longer able to spend time with his rhododendrons due to uneven terrain, Tricia oversaw a drastic trim of the hedges that first brought her into the Owen fold. The living fence that she has maintained for much of her adult life was sheared in half to reveal a mass of rhododendron beyond. The hedge now frames a living masterpiece, generations in the making.

“For Charlie, these plants bring memories of childhood, his mother and father, his own children growing up,” Tricia says. “For me, they’re a translation of my love for him and the career he’s given me. Charlie is charismatic, generous, and funny, and these rhododendrons are his pride and joy. They’re his legacy. I don’t think many people prioritize their gardens like he does this one. People usually hire big companies to do things quickly. Yet Charlie has me here, keeping watch over things every week. He’s a rare breed.”

Over the years, the Owens have held parties on the brick terrace that overlooks these rhododendrons — and Tricia always eats lunch here, in the company of flowers. photograph by Charles Harris