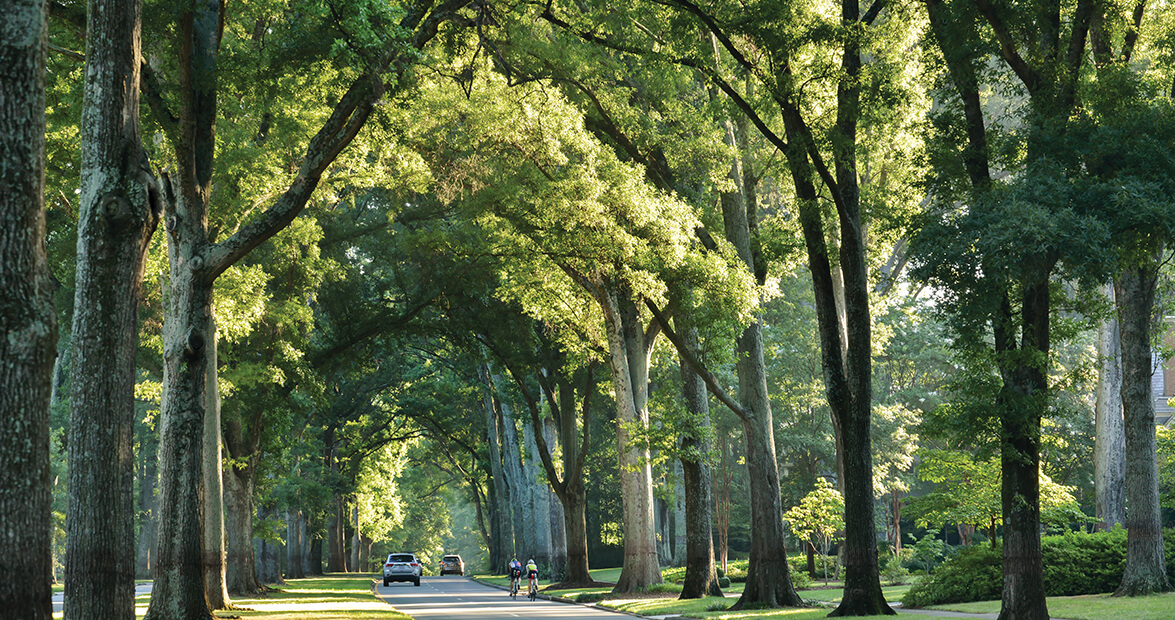 Ten years ago, Marianne McEwen was new to Charlotte and was looking for a house.

One day, she came home, excited. “I saw this wonderful street,” she told her husband, Robert. “I’d love to live there.”

Robert, who grew up in Charlotte, interrupted her. “I know what street you’re talking about,” he said. How did he know? Marianne hadn’t even said what side of town she’d been on.

Six months later, they bought a roomy home on the leafy street that Marianne had fallen in love with: Queens Road West. The road curves through the heart of Myers Park, a century-old neighborhood that runs south from Uptown. Here, a mailman in a pith helmet delivers letters on foot. Moms push jogging strollers. Spandexed bikers pedal along a series of streets that the locals call the “Booty Loop.” The lawns are a carpet of dark green. The stately homes sit far off the road. And soaring above it all are giant willow oaks, majestic and thick, forming a cathedral over the divided lanes of Queens Road West. There are so many all over Myers Park, in fact, that the neighborhood is almost completely covered in shade. In Charlotte, an ever-changing city that grows more modern by the day, this neighborhood is a sanctuary. The trees maintain its calm. “They’re one of God’s magnificent creations,” Marianne says.

There is nothing like this anywhere else in town. And almost all of them — these willow oaks that form a green tunnel over the road below — harbor an open secret. All of them are nearing the end of their lives. 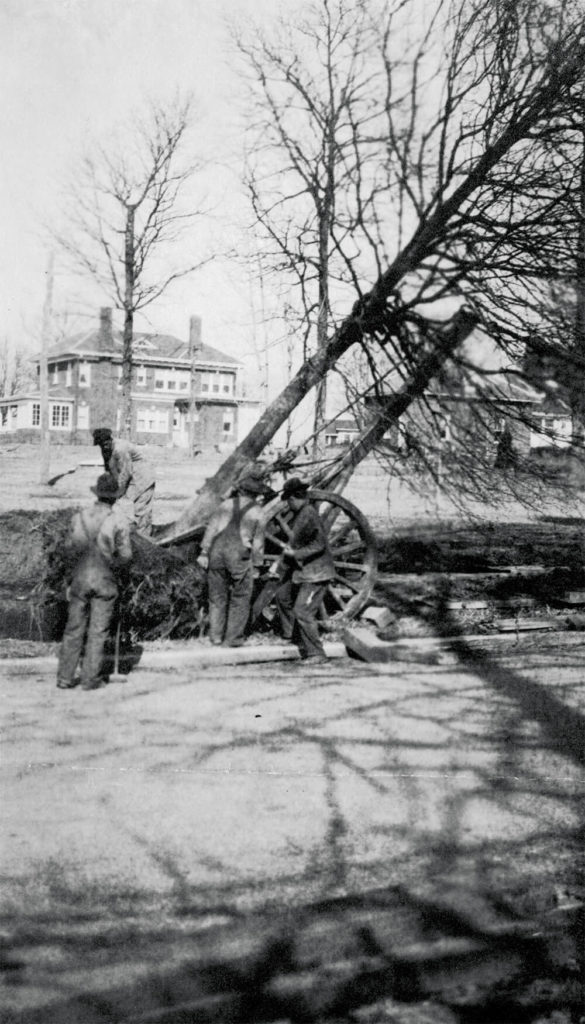 A century ago, Myers Park was a treeless cotton farm outside Charlotte’s city limits when a young landscape architect just out of Harvard came to town. John Nolen’s aesthetic came from Frederick Law Olmsted, who’d designed the grounds of Biltmore Estate, Central Park in New York, and Boston’s Emerald Necklace park system. The developer of Myers Park, George Stephens, gave Nolen free rein to create something different on the farm of John Springs Myers, so Nolen drew up sweeping roadways and side streets that curved to match the gentle topography. He varied the size of the lots, and made the suburb a mix of middle-class bungalows and upscale mansions. Instead of hiding creeks behind homes, he put them front and center between the streets, and left ample green spaces filled with nothing but grass and trees.

About those trees. It was Nolen’s dream to fill his neighborhood with young oaks that would grow up to tower over the homes and streets below. In 1916, workers plucked trees from creek beds and loaded them onto carts pulled by mules. They arrived in Myers Park, planted upright along the roadways and in the wide medians, in front yards and along empty green spaces. Nolen wanted all sorts of varieties — elm, tulip, and plane among them — but he and his deputy, Earle Sumner Draper, especially loved the willow oak. It would grow to be tall and elegant, and thrived even under the concrete constraints of a city. Draper even loved their small, hard-to-rake leaves: They didn’t clog storm drains in the fall.

Over time, people moved in, the trees slowly grew, and Charlotte gradually pushed outward. Myers Park was like a trunk, and neighborhoods like Barclay Downs, SouthPark, Foxcroft, and Cotswold grew off of it like limbs. Freedom Park came into being: lush, green, and manicured. The luxurious Duke Mansion grew, too, and turned into an arboretum of sorts, with gardens springing up beneath its mighty willow oaks. As neighborhoods, homes, and tastes turned more modern in the post-World War II era, Myers Park retained its natural touch.

In 1969, Michael Childs moved into the visibly aging neighborhood, and the loan officer at his bank tried to talk him out of it. You don’t want to move there, the banker said. You can get more house for your money out in the suburbs. But Childs and his wife loved the towering trees, the old-school houses, and the proximity to Uptown, where Childs was a lawyer. They fixed up a 900-square-foot bungalow in Myers Park, sold it, then moved into a larger home on Pembroke Avenue. Childs saw the value of the homes. The trees. The neighborhood. Some people still thought Myers Park would change and lose its character. “That was a bunch of hooey,” Childs says.

Through the 1970s, ’80s, and ’90s, older homes were fixed up, property values skyrocketed, and Myers Park became a sought-after enclave in a rapidly expanding city. Its majestic trees kept getting taller. Older. And closer to their end.

The problem is, even healthy trees only live so long, says Tim Porter, Charlotte’s city arborist. Nearly all of the willow oaks on Queens Road West were planted in the 1920s, which means they’re coming up on the ends of their lives. The trees tend to live longer in forests where they’re thin but tall, a necessity to reach the sunshine at the top of the canopy. Here, trees are farther apart, which means they get more massive. Eventually, those long limbs come crashing down. Other willow oaks have rotting roots, which are hard to spot, even for well-trained arborists. Porter actively tries to save all healthy, structurally sound trees from being cut down. That’s a rarity among major cities, many of which may cut down trees at the first sign of risk. Even so, 100 years is pretty much the end of the line for most willow oaks. “There may be a few at 120,” Porter says, “but there’s not gonna be many.”

In spots where willow oaks have already disappeared, the city is replacing many of them with a variety of new trees. But even as the canopy changes and the cathedral slowly thins out, the feeling that comes from just being in Myers Park remains.

On Queens Road West, Betsy Dew has left her apartment complex for a jog, blocking out the noise of the traffic and chirping birds with her earbuds. She’s young. She could have moved anywhere in Charlotte. Why here?

“I mean …” she says, and glances skyward.