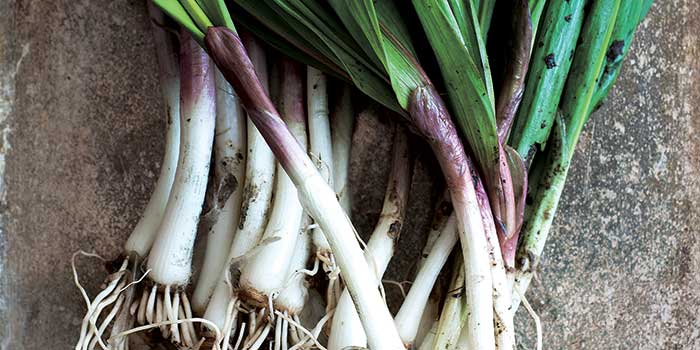 When I met JoAnn Kalonaheskie at the Rainbow and Ramps Festival in Cherokee, she had eaten ramps for breakfast, but that didn’t keep her from another
helping at lunch. Both the green and white parts of the wild mountain leek, lightly fried in oil, were served alongside a whole trout, hunks of potatoes, and a square of corn bread. A bowl of peach cobbler completed her meal.

The talk of ramps immediately took her back to the slopes above the town of Cherokee, where her family foraged for the first wild greens of spring. Mention ramps in Southern Appalachia, and the stories pour forth.

Kalonaheskie, whose late parents were full-blooded Cherokee, remembered how much her mother loved ramps and the lengths she went to in order to preserve them.

“Back when I was young, we didn’t have a freezer,” Kalonaheskie recalls. “If you canned ramps, they smelled through the jar. You wouldn’t believe this, but they did. Now, I just wash them and throw them into freezer bags.”

Kalonaheskie and her family thaw those frozen ramps every Thanksgiving. Like Appalachian people of all races, she simmers pots of pork-seasoned soup beans at least once a week. Most times, she slices up a yellow or white onion to accompany the beans, but in early spring, it’s ramps, raw and bold.

Storyteller Freeman Owle grew up in the Birdtown community of North Carolina’s Qualla Boundary, home of the Eastern Band of the Cherokee Nation. Each spring, Owle’s father would take him and his nine brothers and sisters into the mountains in and around Swain and Jackson counties to forage for ramps, one of the first green plants to appear on the forest floor.

“He was very careful to instruct us not to take the roots of the ramps,” Owle says. “We would take a sharp knife with us, and we would cut those ramps off above the root system. And Dad said that they would always come back that way and we would always have plenty. That’s one of the things Cherokee people believe — that you only took what you needed. And you took it in a very specific way. They were appreciative of all those things around them, and they felt like that was very important.”

When he attended the day school on the reservation, Owle found that not everyone appreciated ramps.

“The teachers, who were not from North Carolina — most of them coming from up North someplace and out West — would put the child out in the hallway, for two or three days,” Freeman recalls. “Every time the children came to school smelling of ramps, the teachers would give them their assignments and sit them in the hall because they smelled so bad; the teachers couldn’t tolerate it.”

That behavior revealed a serious lack of understanding about the ways of the Cherokee on the part of those teachers from up North and out West, says Owle, who is himself a teacher.

“What they didn’t realize was that the ramps may have been all that child had to eat for breakfast that morning. And the Cherokee people would think that was a good thing because it was wholesome food,” Owle says.

Modern medical science has given credence to the Cherokee belief in the therapeutic properties of ramps.
The leaves and bulbs, packed with vitamin C, provided a much-needed variation in the diet. In addition to being rich in vitamins, ramps contain a fatty acid used in the treatment of hypertension, and they are said to be
effective in increasing production of high-density lipoproteins, believed to combat heart disease by reducing blood-serum levels of cholesterol.

In the winter, ramps have been used in decoctions to treat coughs and colds, and in the warmer months, the juice of the bulbs was blended into poultices to relieve the pain and itching of bee stings. Cherokee folk wisdom teaches that ramps thin and cleanse the blood.

“We eat the bulb as well as the leaves, which I think are excellent greens,” Owle says. “Cherokees traditionally believed that ramps needed to be consumed at least once a year to purify the blood. It was believed that people became lethargic in the wintertime, and they would sit around too much, and their blood became sort of thick and lazy. And so in the springtime, it was time to have a mess of ramps to thin things down and cause things to flow and give you more energy.”

Owle’s Cherokee family in North Carolina enjoyed ramps raw with soup beans, parboiled, fried in bacon grease, or mixed with either scrambled eggs or fried potatoes. And then, there were times when the fresh ramps never made it back home. The Owle family washed them in creek water and ate them in the woods.

“I don’t know of a Cherokee family anywhere that does not like ramps,” Owle says. “They’re one of the most wonderful seasoning agents on earth.”

Digging ramps often requires a rigorous hike — another healthy benefit. They are elevation-sensitive and thrive on the northern sides of mountains, in cool, shady areas with damp soil and an abundance of decomposed leaf litter or other organic matter. New leaves emerge in March or April, and they then die back as the weather gets warmer. The brevity of the season makes the harvest all the more precious.

In fact, Owle says Cherokees believe that ramps are a gift from God. That’s why, he says, his father was so careful in making sure the ramps would return.

Owle recalls a Cherokee saying: “If you have a mess of ramps once a year, you’ll live to see the next spring for the next crop of ramps to come in.”
The ancient cycle of renewal and rebirth is embodied in this mountain plant that the rest of the world is finally discovering.