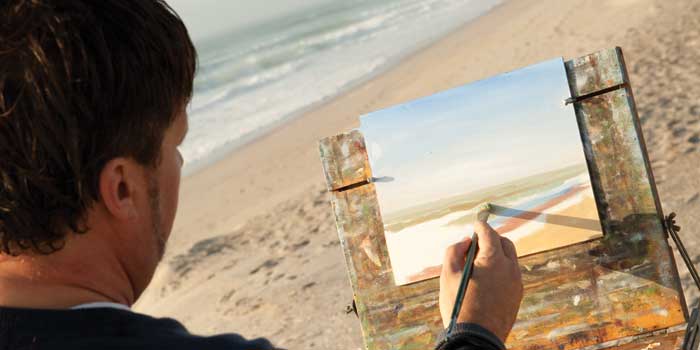 While floating on a surfboard off the Carolina coast, waiting for a good wave, George C. “Chip” Hemingway III began to notice light. He saw the ocean waters around him change from aquamarine to indigo, from turquoise to sapphire. He saw the clouds reflect and absorb blinding rays. He saw the sun cast shadows and light on the sand; he saw the surf break and sea birds flock in ways he never considered before.

As a young surfer, Hemingway spent much of his time here. He surfed at Wrightsville Beach, Masonboro Island, and the Outer Banks — wherever the swell was best. Through surfing, he saw the world around him from an artist’s perspective, before he ever picked up a brush.

“I became an artist because I’m a surfer,” Hemingway says.

Hemingway is 47. He grew up in Tarboro and drew dozens of pictures when he was a child. But he never painted until he was in college. While he studied architecture at North Carolina State University, he took two painting classes and studied color theory. For the first time, he learned how to capture the light he loved.

Painting has been Hemingway’s obsession ever since, and in recent years, he’s developed his own loose, Impressionistic style.

Now, Hemingway keeps two oil-painting kits, a watercolor set, and a light for night painting in his car. When he surfs, he flees the water to paint what he sees. On hunting trips, he unpacks his brushes while his friends scout game. Once, at a sunset gathering along the Intracoastal Waterway near Wrightsville Beach, Hemingway was so struck with the beauty of the marsh and his friends in the fading light, he sprained his ankle running to the car for his box easel and paints.

“You just have these fleeting windows of time,” he says. “It’s now or never.”

Hemingway lives and travels along the North Carolina coast. His subject matter is typically coastal — beaches, waterways, marshes, landmarks; from moonrises over Masonboro Island to seaside porches on Bald Head Island to scraggly piers in Nags Head, he’s painted them all.

He’s learned that he prefers to paint en plein air; he works quickly outdoors, then refines the piece in his studio. His first discovery of en plein air painting was during a fishing trip in a Southern Pines pond. The fish weren’t biting, so Hemingway dumped his worms and set up his brushes and paints to record the scenery. A man on the trip bought the painting, and Hemingway found a new passion.

But painting is not Hemingway’s sole profession. He finished his architecture degrees at N.C. State in 1992 and leads a dual life as an artist, balancing his creativity between designing buildings on a computer and capturing light on canvas.

As a principal architect at Bowman Murray Hemingway Architects in Wilmington, Hemingway has designed or renovated numerous high-profile, coastal-area buildings. He designed the renovations and additions at all three North Carolina Aquariums, oversaw the preservation of the Oregon Inlet Life-Saving Station on Hatteras Island, and managed projects at Roanoke Island Festival Park.

One project — North Carolina Aquarium’s $26 million Jennette’s Pier facility in Nags Head — brought him to the Outer Banks two days a week for two years. During his downtime, he painted scenes of the Outer Banks, from the marshlands surrounding Bodie Island Lighthouse to the cozy bar at Tortuga’s Lie to the waters flowing through Oregon Inlet.

People are taking notice of Hemingway’s work. Three galleries in the state represent him. And he doesn’t see one of his creative endeavors as more important than the other. He likes to say he is taking a journey into nature through art and architecture. Through his two careers, Hemingway tries to show his love for the natural world.

“I want my buildings to allow people to enjoy nature more, and I design buildings that work in harmony with nature,” he says.

Hemingway admits that having two strong passions is a blessing and a challenge. A full-time job and a family that includes two young boys make it difficult to find time to paint.

Every day, Hemingway wakes up at 5:30 a.m., to paint in his studio. At work, he shifts gears to architecture — a juxtaposition to straight lines from his free-form painting style. At lunch, he’s back in the studio. Before bed, or whenever he finds a spare 20 minutes, he dabbles on his paintings. At night, he paints with a figure-drawing group. The time on the canvas adds up.

“I can build a vast body of art 15 minutes at a time,” Hemingway says.

And so he goes, painting solo, with fellow artists up and down the North Carolina coast, at home, or wherever his latest architecture project takes him.

“These paintings are my footsteps of where I’ve been,” he says.

Chip Hemingway visits the North Carolina shoreline to capture the sights on canvas. There are a few spots along the waterfront where Hemingway prefers to paint — the light is sharper, the views clearer, the ocean more blue.

Molly Harrison is a freelance writer and editor living in Nags Head who writes extensively about the people and places of the Outer Banks. Her most recent story for Our State was “Portsmouth Island” (January 2012).