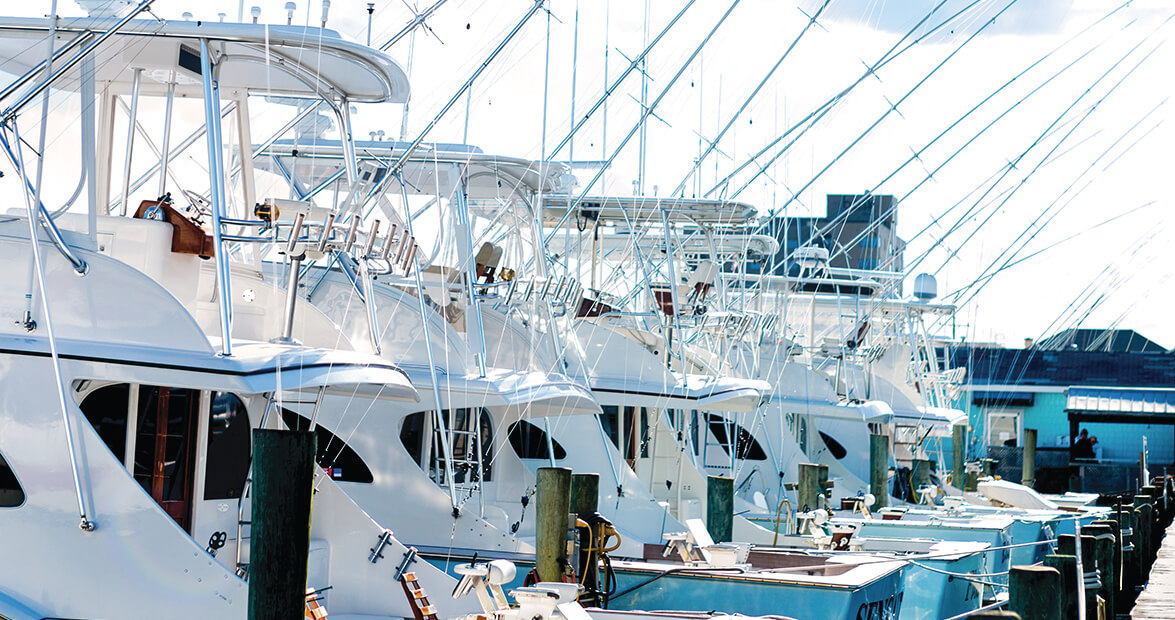 The vacation castles built upon the sand form a nearly unbroken wall against the sea.

They run along the southern horizon, on a slender barrier island across Bogue Sound, beyond the sailboats moored in the Morehead City waterfront.

Not far from here, North Carolina beach towns offer surf shops and racquet clubs, beach towels and breakers. But Morehead City is bungalows with cedar shake siding and yards with cedar shade. It’s a sportfish weigh-in after a wave-tossed day in the Gulf Stream. It’s a pile of fried shrimp for lunch, a peck of steamed oysters for supper. Cross a bridge, and you’re at the beach. In Morehead City, you’re at the coast.

Here on the waterfront, listening to the screech of seagulls, you catch a whiff of an authentic coastal smell: marshy, fishy, salty. Close your eyes, breathe it in, and you’ll know exactly where you are. That scent is sure to stir a craving for something reeled in from, or plucked out of, the tidal trove that surrounds Morehead City like a mollusk shell.

Walk into Southern Salt Seafood Restaurant, where, a couple of hours earlier, you might have spotted a man on the back deck, shucking oysters. That man, Sammy Boyd, was born and raised right here on the Morehead City waterfront. In 2016, he refurbished the former Captain Bill’s Restaurant and opened Southern Salt, serving what he calls “sea-to-table” fare. 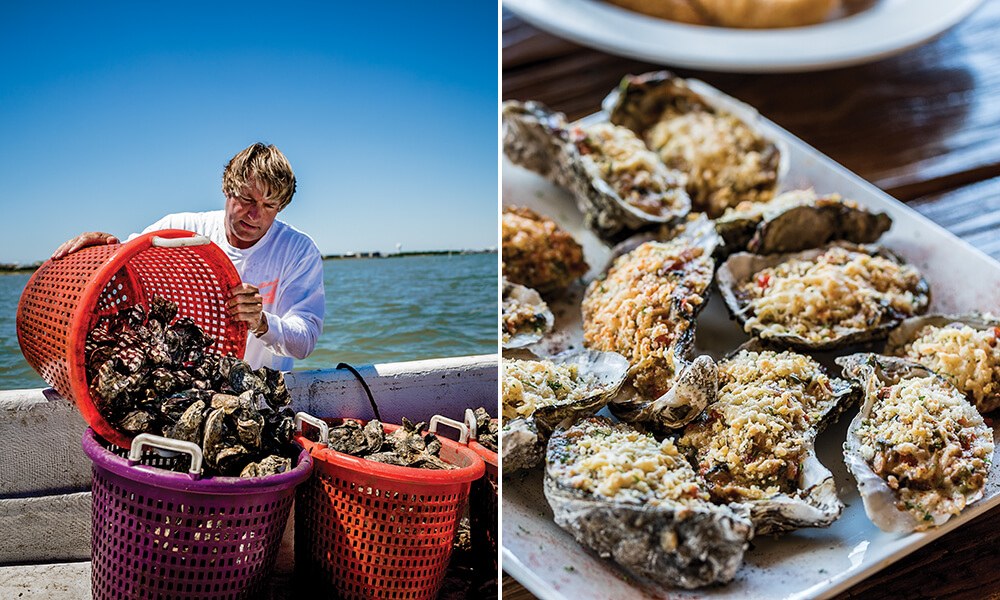 Boyd raises his own oysters, cultivating them in cages and mesh bags in the sound and waterways. “Look at that meat,” he says after prying open a shell to reveal its contents. “See how deep that cup is?” With an oyster knife, he digs in, loosening the oyster and presenting the half-shell as if it’s a glass of fine wine.

Stand with him now on his outdoor dining deck overlooking Bogue Sound, and he’s eager to crack open the essence of this sea-salted corner of North Carolina, getting straight to the meat. He’s prone to impromptu cruises in his Carolina Skiff, tied just beyond a table for two, so as to give visitors the proper perspective. “If you lived on the coast back in the old days, you were a fisherman,” he says. “You had to fish to make a living, or to eat.”

Fishing still has its hooks deep in Morehead City, a town (yes, it’s officially styled a town) of about 8,700 people. The slogan on its website is “Fisherman’s Paradise.” In slips along the waterfront are charter boats offering half-day and full-day deep-sea ventures to catch wahoo, tuna, bluefish, dolphins, blue marlin, and king mackerel. If they’re not out among the swells, crew members are cleaning the spacious white vessels and preparing the tackle. “Hopefully, we’ll get 130 trips through the summer,” says Daniel Monette, who works for Energizer Sportfishing. He moved here from Stanly County a decade ago, drawn by his love of fishing. 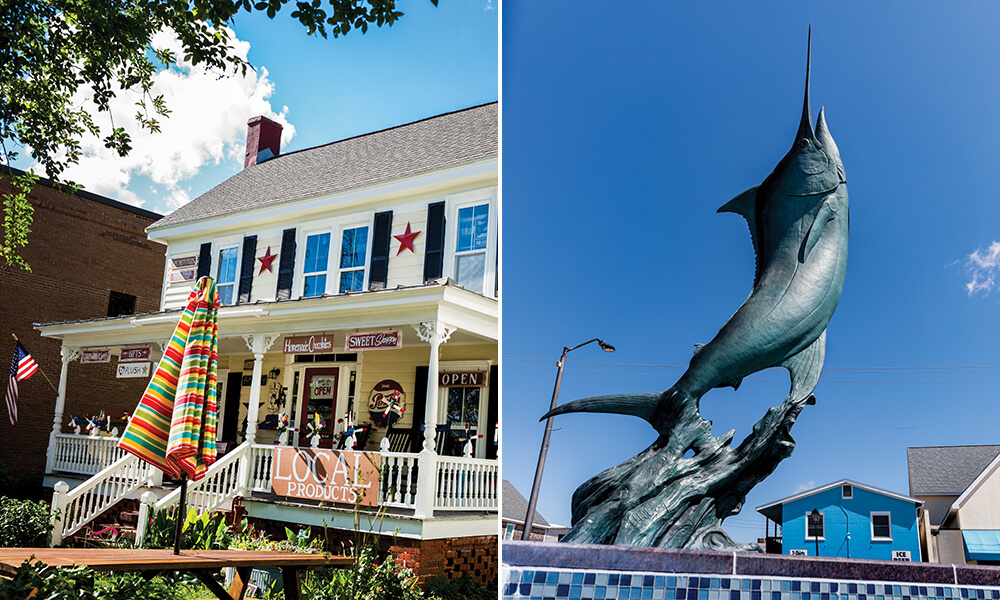 Morehead City is built on traditions, from the old-timey Parsons General Store to the annual Big Rock Blue Marlin Tournament to Russell Yachts, the 119-year-old family business carried on by Oliver Russell and his dad, Tommy. photograph by Charles Harris

One of the most coveted catches in the great turquoise yonder is the blue marlin, renowned for its sword-like bill. Every year since the late 1950s, the town has hosted the Big Rock Blue Marlin Tournament. Competitors head to an outcrop of underwater ledges in the Gulf Stream to pursue the iconic fish. It’s a species more often associated with Florida and tropical waters, but thanks to the warm, clear current that is the Gulf Stream, the magnificent marlins troll along our coast, too. In 2016, the Big Rock winner received nearly $663,000 for a 621-pound specimen.

And then there’s the North Carolina Seafood Festival, which makes a big splash in town on the first weekend of October. For three decades, the festival has celebrated North Carolinians who work in commercial fishing. “Commercial fishing is what made this sound,” Monette says. “Everything around here used to be fish houses.”

In Morehead City, the sea is both food source and highway.

Morehead City is just across the Newport River from Beaufort, which was known as “Fish Town” in the early 1700s and became a crucial port during the American Revolution. Morehead City didn’t come along until the 1850s, when Gov. John Motley Morehead proposed a larger commercial port on a spit of land called Shepard’s Point. In 1857, he bought 600 acres, forming the Shepard Point Land Company.

Four years later, the Atlantic and North Carolina Railroad reached Shepard’s Point, linking the port to Goldsboro, Greensboro, and Charlotte, and leading to inevitable growth. In 1861, Shepard’s Point was incorporated as Morehead City, and to this day the town is home to the Morehead City State Port Terminal, its warehouses and cranes a defining feature of the town’s profile.

This is another aspect of the coast removed from beach towels and sand castles: shipping and industry. In Morehead City, the sea and estuaries are both food source and highway — living, working, breadwinning things. More lifeblood than mere backdrop.

Today, the fish houses are gone from the tourist-favored waterfront, but longtime businesses are still family-run and flourishing. The Sanitary Fish Market and Restaurant, one of the waterfront’s oldest and most storied place to eat, still serves fantail shrimp and fried scallops as it did back in 1938, when Capt. Ted Garner and Capt. Tony Seamon opened the diner with just 20 seats. It’s much roomier now — 14,000 square feet — but it remains in the family, with Captain Garner’s grandson, Jeff Garner, at the helm. 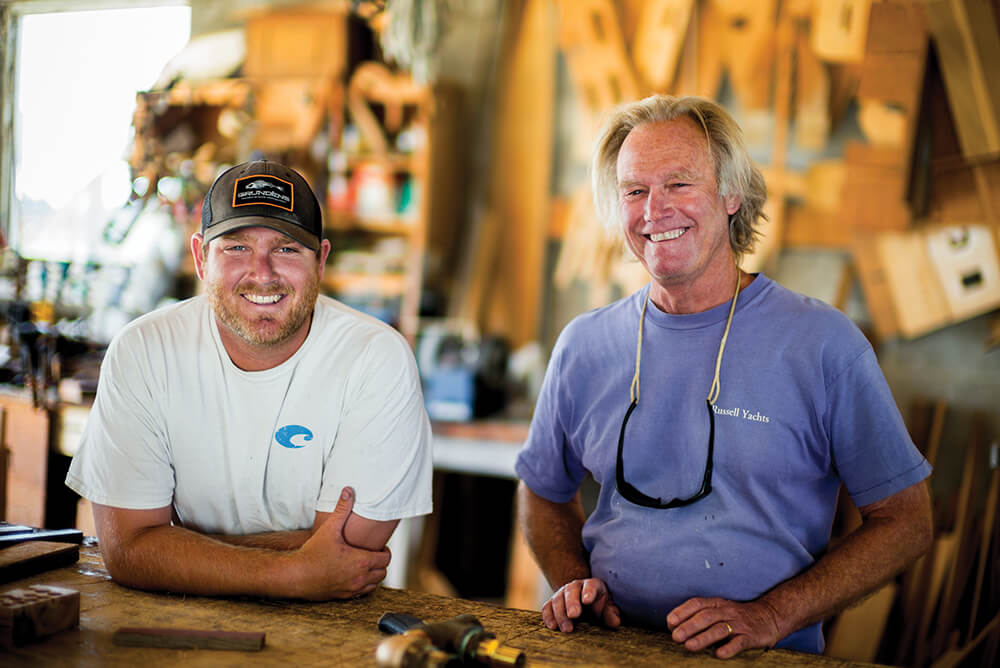 Oliver Russell and his dad, Tommy. photograph by Charles Harris

At the south end of Ninth Street, 26-year-old Oliver Russell is carrying on his own family tradition, one that began in 1898: He repairs boats, working with his father, Tommy, at Russell Yachts. Right now, Oliver is helping his girlfriend, Claire Lockman, build and stain wooden planter boxes. She’s not a native, but her heart clearly belongs to Morehead City. “It’s still relatively natural and relatively undiscovered,” she says.

As she says this, it’s an exquisite afternoon, and Bogue Sound sparkles in the sun. Russell chimes in: “This is a beautiful spot,” he says. “I go on vacation to beaches up and down the East Coast, and I always want to come home.”

Therein lies another distinction between Morehead City and the multistoried houses standing among the dunes at the far shore. A beach town is a place to escape from home. Morehead City, owing its existence to the sea but having no beach of its own, is a place to come back home to. Go ahead: Stand on the waterfront at low tide, breathe in that salty air, and make yourself at home. And be sure to stay for supper.

In Morehead City, “catch of the day” has more than one meaning.

Big Rock Stadium
Make waves at a home game with Morehead City’s minor league team, the Marlins. The stadium, open since 2010, is a nod to the Big Rock Blue Marlin Tournament and hosts more than 30 games each season.

Circa 81
Chef and owner Clarke Merrell has crafted this tapas restaurant by hand — from building the custom bar to selecting the local ingredients. Merrell’s other popular food destinations include Dank Burrito and Twisted Spoon frozen yogurt.

History museum of Carteret County
In the heart of downtown, explore exhibits on North Carolina’s coast, from indigenous Indians to the Civil War to World War II. 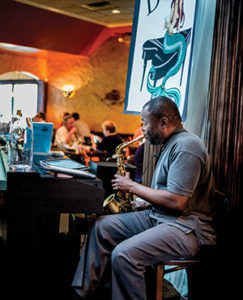 Right: Saxophone player David Robinson of Have Horns Will Travel serenades diners at Bistro by the Sea. Photo by Charles Harris.