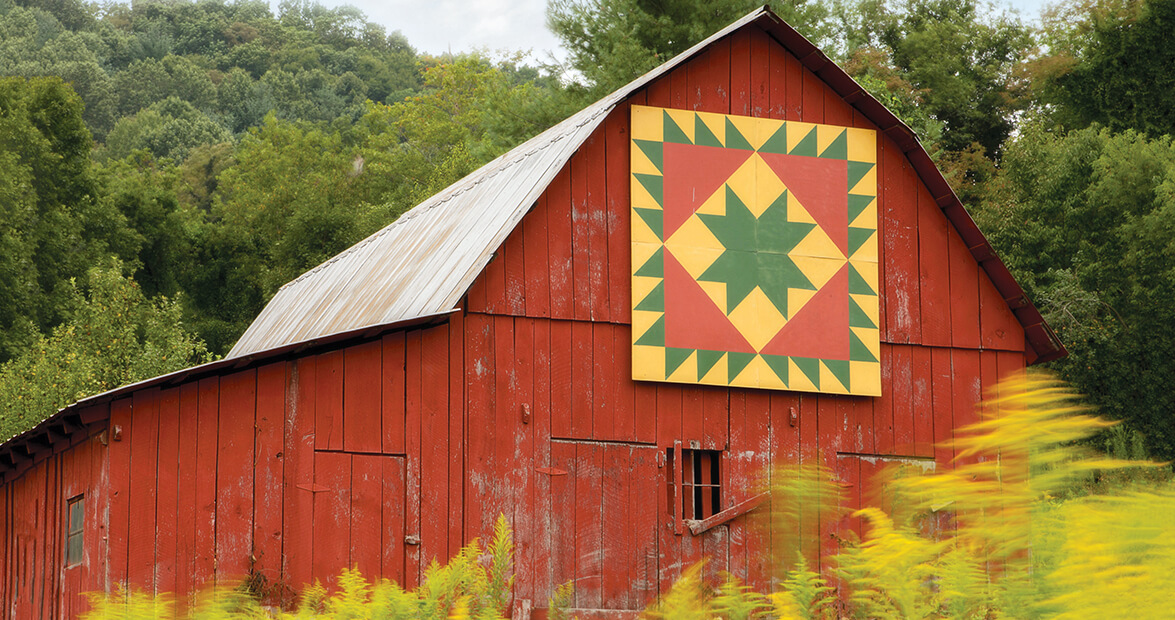 The colors pop, bursting out of a barn that’s faded to gray after so many harvest moons. Three large, diamond-shaped paintings, each on a wooden panel, add a touch of wow! to the earth tones along Buck Mountain Circle on the outskirts of West Jefferson.

One diamond is filled with a big yellow flower, its edges in orderly triangles, shining like the noonday sun. Another painting depicts an actual sun, rising over a pointy green hill. The third radiates with triangles and squares, a pattern called the Carpenter’s Wheel, colored in greens and reds and yellows.

At first, these splashes of art might look out of place, yet at second glance — and there’s always a second glance — they fit in so perfectly. Unlike a billboard thrust against the countryside, barn quilts complement the scenery, add warmth to it, and embrace those of us passing through it. Drive the country roads around West Jefferson, among the many Christmas tree farms and rolling pastures and wooded coves, and you’ll see haylofts dabbed with color, brightening even the gloomiest winter day. 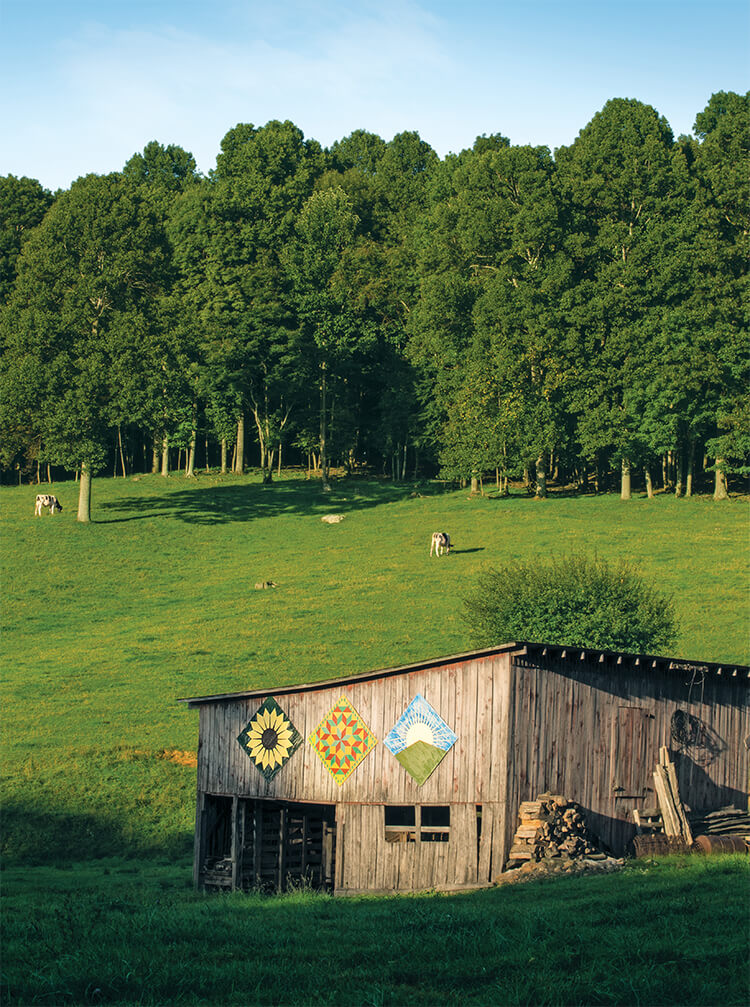 Artists Dale Sheets and Hannah Abee painted the Carpenter’s Wheel that serves as the centerpiece of this trio. photograph by Jon Eckard

Drive on into West Jefferson and you’ll come across not only the occasional quilt square on a building wall, but also more than a dozen murals. Check out the one — a big one — on the corner of West Main Street and North Jefferson Avenue: It’s a banjo picker and a fiddle player in mid-note against a backdrop of the New River, farm fields, and mountains. Classic Ashe County.

West Jefferson, with a population of around 1,300, has a distinctly artsy vibe — downtown is home to 18 art galleries and craft shops — but it’s still small and unvarnished enough for mud-on-the-fenders pickup trucks to rumble by. Here in downtown, you can sip espresso at a coffee shop called Bohemia or stock up on Mason jars at the True Value Hardware. You can take a rug hooking or basketry class at the Florence Thomas Art School. You can do a wine tasting, or a gourmet oil and balsamic vinegar tasting, or buy a used novel, or get your banjo fixed, or get a new pair of work boots.

The town is a tapestry of contrasts, much like the barn quilt Syndi Brooks is painting at her little studio on East Second Street.

“I think it can be said that this world is divisive enough,” she says while taking a break from the half-painted geometric shapes at her workspace. “I look at the quilt as piecing communities together.” Quilts, after all, are sewn deeply into the fabric of Ashe County, and of Appalachia. Across these mountains, you’ll hear stories of mothers and grandmothers and great-grandmothers who gathered ’round after supper to sew quilts. Their handiwork protected their families from the cold of deep mountain nights. 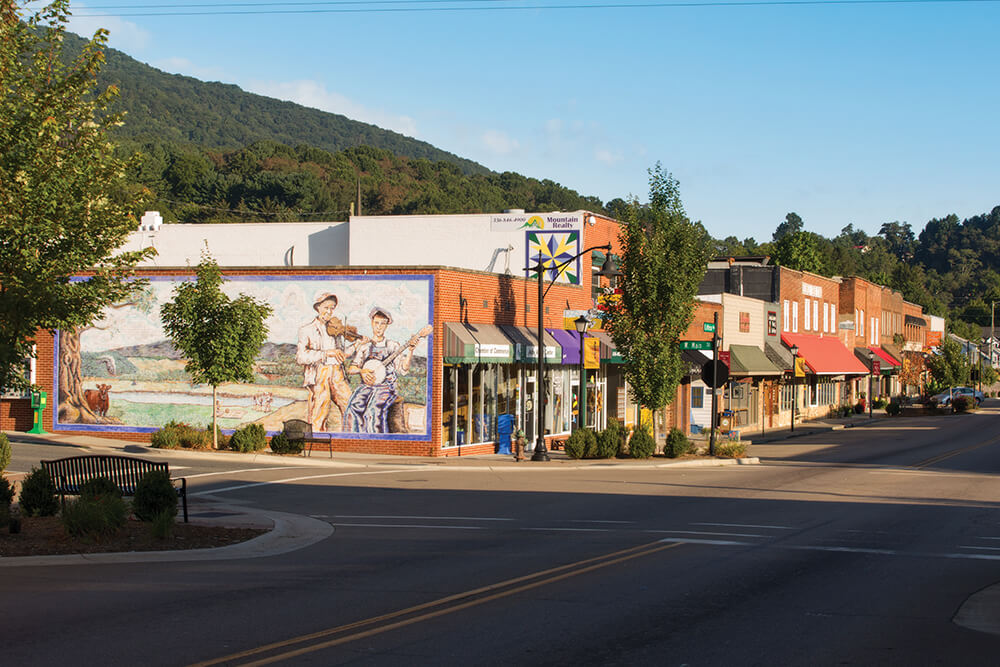 Marianne DiNapoli Mylet’s New River Traditions is one of a number of murals in downtown West Jefferson that, together, tell the story of life in Ashe County. photograph by Jon Eckard

In Ashe County these days, there’s a group of women — and, yes, men — who make up the Ashe County Piecemakers Quilt Guild. They get together regularly to sew and chat and learn. “I think it’s a wonderful celebration of women’s work through the years,” Brooks says. “To take the old fabrics and the feed sacks and provide for their families warm quilts for the winter.”

“I look at the quilt as piecing communities together.”

Brooks and her spouse, Renée, were born in Ashe County but went off to stretch their horizons and earn a living. They returned in 2007 to care for Syndi’s ailing grandmother and were beguiled by all the barn quilts dotting the landscape. Renée painted one herself and hung it up on the side of their house. The neighbors loved it and, of course, had to have one, too. And so it began: Syndi and Renée went into business as the “Quilt Square Girls.” Brooks figures they’ve painted more than 1,500 barn quilts of all different shapes and sizes.

Quilts began decorating barns around here in 2005, when the Ashe County Arts Council brought together locals to design, paint, and hang them. “It was something very personal to people in the patterns they would choose and the colors they would choose,” says Jane Lonon, executive director of the Ashe County Arts Council. “It was just a perfect extension of the work we had done in downtown West Jefferson with our murals project and public art.” 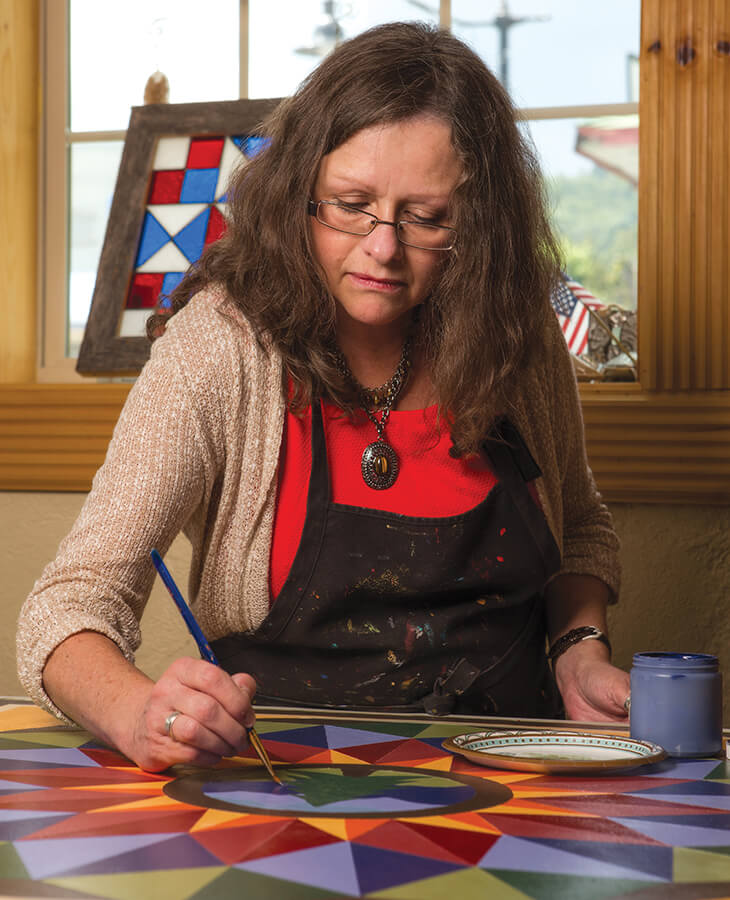 But how did this little town, all snug in its mountainous corner of the state, blossom into such an arts enclave? Southern Appalachia does have a long history of arts and crafts — weaving, woodworking, pottery making — but 18 art galleries within eight blocks is, well, a lot. West Jefferson must have a certain something to attract so many creative types. “The overall quality of life in a small rural community,” Lonon says, “certainly lends itself to artists and to many of their lifestyles, and the ability to find the time, the peace, the beauty.”

The town’s artistic repute really began to sprout with the fresco paintings inside St. Mary’s Episcopal Church, one of West Jefferson’s most popular stops for visitors. It’s a quaint, white church south of town that houses three magnificent frescoes painted by North Carolina native Ben Long in 1974. The paintings are titled Mary Great With Child, John The Baptist, and The Mystery of Faith. This little sanctuary, open to the public 24 hours a day, is a wonderful place to sit down in dim light, shut out the noise of the outside world, and bask in quiet contemplation.

Art has brought out the color in West Jefferson, making its components shine a little brighter.

The frescoes were the first created in North Carolina by Long, and “the first significant works of public art in Ashe County,” Lonon says. They became a means for West Jefferson to market itself as a place to see and appreciate art, leading to what she calls an “aha moment”: As more people arrived in Ashe County to admire the frescoes, the more the town wanted to expand its art offerings. Soon, locals began to look at empty brick walls as something else … a canvas. “The downtown murals were the beginning of the revitalization of West Jefferson,” Lonon says. “The art itself was sort of a vehicle for attracting interest and effecting change in our downtown area.”

Florence Thomas was among the area’s most renowned artists. Born on a farm in 1909, she created hundreds of paintings — of landscapes, flowers, farm animals. When she died in 2007, she left behind money to start a nonprofit art school in town, which hosts workshops throughout the year.

Art has brought out the color in West Jefferson, making its components — longtime businesses to newly opened boutiques — shine a little brighter. Before long, you’ll see the art in every pursuit here, whether it’s growing Fraser firs or separating curds from whey.

Step inside the Ashe County Cheese store and sample a cube of sharp Cheddar from a toothpick. Cheese is an art form here. There’s cheese with garlic, parsley, and chives. Cheese with tomato and basil. Cheese with garden vegetables.

And it’s not just cheese and quilts that are made with artistic flair here.

“I’m not a chef, but I like to play with my food,” says Ann Rose, who opened the Rose Mountain Butcher Shoppe last year. All of her meat — beef, pork, lamb, duck, quail — comes from local farmers. When she says that she plays with her food, what she means is, she lets her imagination run free. So why not throw some maple syrup and blueberries into the sausage? She’s done it, and it’s a hit.

That creative, let’s-try-this impulse infuses so much of West Jefferson, from crafting a Belgian witbier at Boondocks Brewing to working with oil sticks and pastels at the Florence Thomas Art School. It’s all part of the patchwork, the texture, of this town. And just like a quilt, West Jefferson has a crafty way of wrapping you up, making you feel comfortable, and putting you in no hurry to leave.

A Bite and a Brew

From cheese to beer, the signature flavors of West Jefferson only get better with age.

The Hotel Tavern
This cozy restaurant is located inside the historic Old Hotel, which was built to service passengers of the Virginia Creeper train that once ran through West Jefferson. Black-and-white photos, original front doors, and an old support beam repurposed as a bar top honor the history of one of the city’s oldest buildings. thehoteltavern.com

Boondocks Brewing
Boondocks founder Gary Brown loved the fresh, natural taste of Ashe County spring water so much that he would transport it across the state to Rocky Mount for his home brewing. Now, Gary owns Ashe County’s first commercially licensed craft brewery, where you can grab a bite — and beers that you’ll only find here. boondocksbeer.com

Whether you’re looking for classes or a work to hang, the art scene in West Jefferson has what you need.

Catchlight Gallery
Each of CatchLight’s 21 fine-art photographers spends the occasional day working in the gallery and interacting with visitors, including students from Ashe County High School’s photography class. The gallery provides space for these up-and-coming photographers to showcase their work, with 100 percent of the proceeds going to the student. catchlightgallery.net

Florence Thomas Art School
This nonprofit art school continues the legacy of Florence Young Thomas, an Ashe County native famous for her prolific painting and dedication to art education. The school offers workshops for children and adults, exhibition space, special events, and resources for those interested in the arts. florenceartschool.org

Originals Only Gallery
When Joan Bell needed a place for the stacks of paintings she had sitting at home, the Ashe County Arts Council encouraged her to move into an empty storefront downtown. Now, her western North Carolina- and UK-inspired paintings are in the spotlight alongside other local paintings, textiles, pottery, and woodworks. originalsonlygallery.com