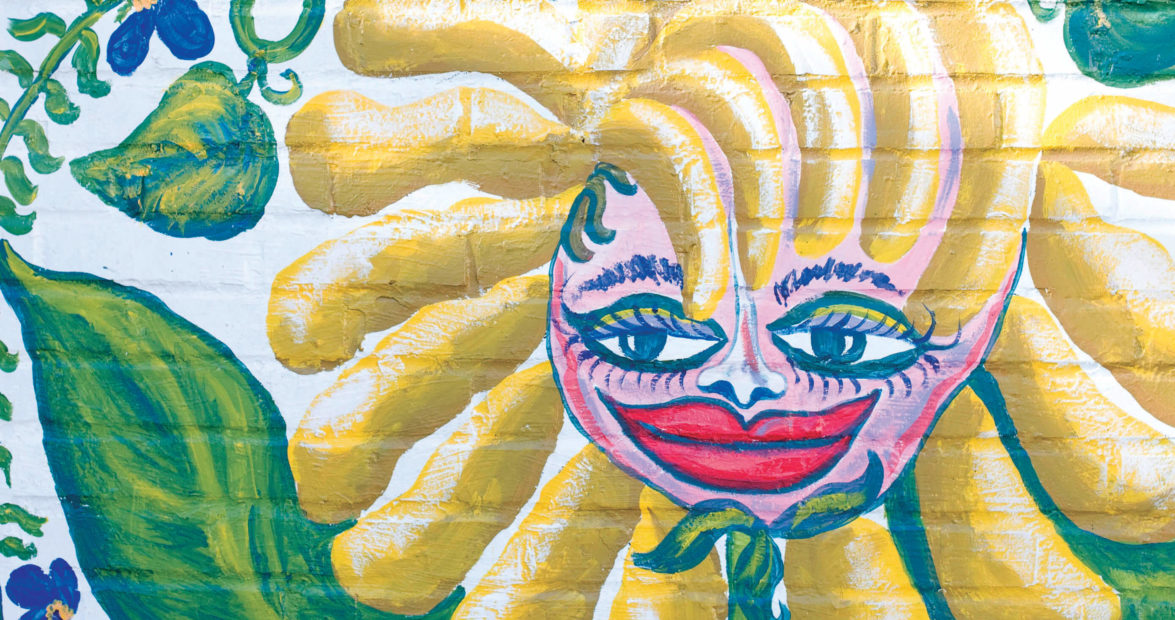 My grandfather and his family grew up on a huge farm just outside the Clayton town limits. John Jennings Williams, otherwise known as Papa JJ, used to tell me stories about the tobacco, corn, soybeans, and anything else that could be grown in the fertile, almost black soil of western Johnston County. I remember walking out the front door of my childhood home, seeing tobacco fields in every direction.

People came from miles around to stop at Papa JJ’s little “general store,” which just happened to be in a building next door to his house on Little Creek Church Road. I remember going into that store, sliding open the drink box, grabbing a six-ounce glass-bottled soda, and listening to old men discuss the goings-on of Clayton life.

That was 30 years ago. Just recently, when I walked up to The Coffee Mill on Lombard Street, the door opened. A man I’d never seen before came out with a coffee in one hand and a muffin in the other. Three men were inside sitting at a couple of tables, discussing sports, as well as family events and mishaps. There was no animosity, no tension — just locals enjoying the morning along with their beverages. It seemed as if I were that little boy again, drinking my soda and enjoying the conversations of others.

With a population of fewer than 14,000 and covering almost 13 square miles, Clayton is a quiet yet thriving community proud of its 1950s character but comfortable with progress.

Clayton owes its existence to the North Carolina Railroad, which built a rail line along a road cut across Johnston County in 1853. The town was originally called Stallings’ Station, but the name was officially changed to Clayton on January 30, 1856.

Early on, Clayton was built on farming — tobacco, watermelon, and cotton. Just 15 miles southeast of Raleigh, and situated along the Neuse River, Clayton sat in the middle of an agricultural gold mine. The headline of the April 1907 edition of the Raleigh Evening Times newspaper read, “Clayton, North Carolina. The Wealthiest Town For Its Size in the World.”

Today, growing cotton, tobacco, and watermelon is still a big part of Clayton’s culture, with more than 1,100 farms in Johnston County.

In the past 30 years, the community has broadened its economic base with service and trade-oriented businesses. Biotechnology giants Talecris and Novo Nordisk, along with construction equipment leader Caterpillar Inc., have offices in Clayton. Additionally, the town has evolved into a bedroom community for people who work in the Triangle but yearn for a small-town home life.

Barry Woodard, managing partner of HomeTowne Realty and past president of the Clayton Chamber of Commerce, says the look and feel of Main Street have been purposefully left alone. “They want to restore all of the buildings to their original character,” Woodard says. “It is not cheap, but look at what it does for the community. All of the old antique brick. It’s part of the character, the history of downtown. We had to keep it that way.”

“This is the busiest main street I’ve ever seen. I don’t know if there’s a busier main street, per capita, in the country,” Woodard continues.

There’s an old saying in Clayton that a person is not truly a Claytonite until they’ve eaten at Jones Lunch. Started in its current form in 1958, the cafe specializes in hot dogs “all the way” (mustard, onions, chili), as well as a friendly atmosphere and a willingness to stay the same over the years.

“A few years ago, we decided to try romaine lettuce, because iceberg breaks up so easily,” co-owner Alice Jones says. “One customer asked me why we were now putting collard leaves on the BLTs. Another asked if they could bring their own lettuce from home. Long story short, we went back to the iceberg.”

Curtis Jones, Alice’s husband and son of the original Jones owner, likes the laid-back ambience of his family eatery. “You don’t have to dress up to come in, you have a good time, and enjoy the atmosphere. Our customers will see good friends, and when they leave, they’ll be happy,” Curtis says. “It’s been a lot of fun over the years, and I know there are a lot of people that like the fact we never change anything.”

In 2000, Jodi Sager and Cliff Morgan started The Coffee Mill coffeeshop inside the old J.G. Barbour and Sons hardware/farm supply store at the corner of Lombard and Main. The pair later added the FlipSide restaurant and bar upstairs. The wooden floors creak as you walk across them, and the original brick adds a feeling as if you’re actually traveling back in time as you sip your beverage.

Barista Dan Tetro believes the establishment is much more than coffee (which he called the best across three towns), good food, and great live music. “The Coffee Mill is a traditional coffee shop, but we’re also a bridge between the old and the new,” Tetro says. Local art and music are front and center here; the Millstock Music and Arts Faire will celebrate its 10th year in June.

The town’s slogan is “the premier community for active families.” According to the Clayton Center, more than 120,000 people last year attended shows, concerts, or meetings at the facility. Clayton made good use of an existing building — the old Clayton Elementary School site — and renovated it to include a 600-seat auditorium and more than 12,000 square feet of meeting space. Jody McLeod, Clayton’s mayor and owner of Annie V’s Florist (started in 1949 by Mrs. Annie Valentine), has an office there, as do many of the town’s administration and support staff.

Clayton, for as long as I can remember, has revolved around community. One step forward in that commitment is the new Clayton Community Center, which was completed earlier this year. The Center represents a $6 million investment by the town of Clayton, and will include an elevated walking track, a gym, a workout room (for yoga, aerobics, martial arts, etc.), a fine arts room, and an inviting community patio suitable for gatherings.

Steve Biggs, Clayton’s town manager, is especially excited about the Center’s second floor balcony. He told the Clayton News-Star, the hometown newspaper, that the balcony was “[Clayton’s] front porch.”

Whether people go to Mulberry on Main or Lucky Chicken Peruvian restaurant, Esquire Barber Shop or Kirby’s Precision Cuts, Flowers by the Neuse or Elmore’s Furniture, the initial response will always be the same — attention with courtesy and a smile. Woodard, of HomeTowne Realty, continues to shop at Beddingfield Drug Store, which opened for business in 1919, because they’ve always taken care of him in a way he just can’t find anywhere else.

“I was talking to a guy the other day, and I told him where I lived, and he said, ‘Yeah, I know where Clayton is, but the only time I go through there is when I go to the beach,’” recalls Woodard. “There are still people that live less than five miles from here that have never set foot downtown. They think of U.S. Highway 70 as the main corridor, as Clayton’s identity. They’re really missing out.”