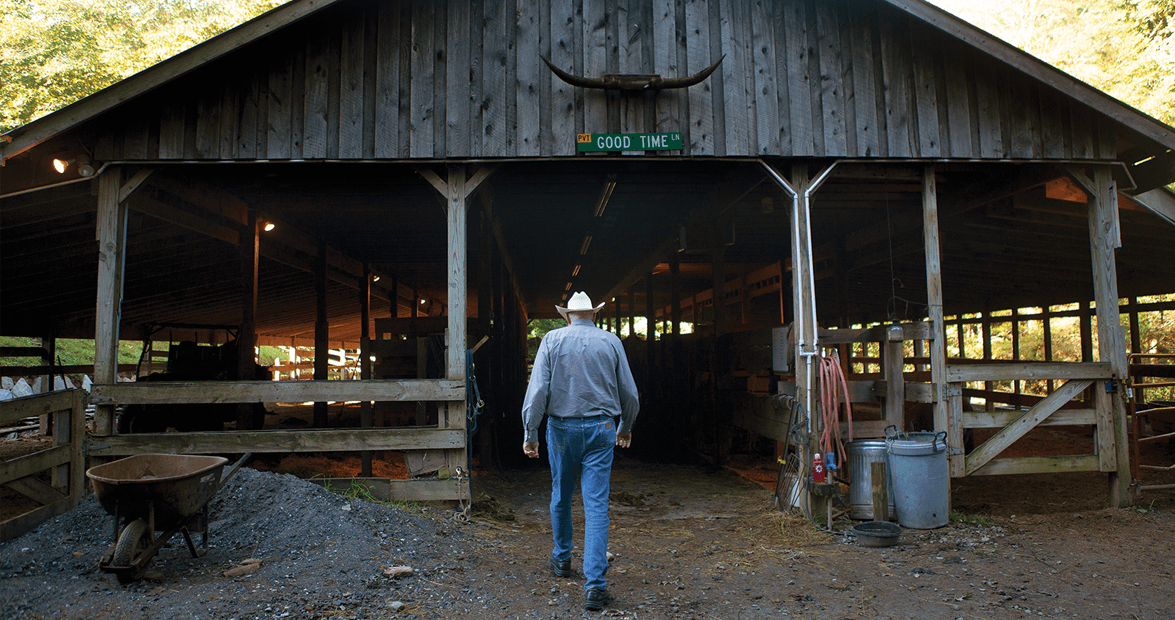 Just about every weekend, and for two years straight, the black Buick Park Avenue wound through the mountains down in north Georgia, up the Blue Ridge Parkway to Virginia, and all around the woods and the hollers and the switchbacks of western North Carolina, and the man driving kept telling himself he would know it when he saw it. He drove west on N.C. Highway 80, past the Refuge Baptist Church and into the Pisgah National Forest and over the Eastern Continental Divide, past Elliott’s Trout Pond and Sleepy Bear Lane and the South Toe volunteer fire department, until he saw a sign for an old campground called Clear Creek.

Rex Frederick — tall, sturdy, and genial, a mortgage broker from Mobile, Alabama, who wanted to do something else — got out of the black Buick. He found the man who ran the campground, and the two men started walking up the hill, 100 yards, 200 yards, 300 yards. Frederick picked up a stick. Stuck it in the soil.

“You ever thought about selling your place?” he said.

Construction started in June of ’95.

People come here, to this dude ranch, like a dude ranch out West — only it’s here in the East, from Charlotte and Raleigh; from Richmond, Virginia; from Atlanta, Georgia; and Tampa and Orlando, Florida; from New York and New Jersey and Michigan and Wisconsin and Europe. People who are doctors and lawyers and truck drivers and ambassadors and NASCAR crew chiefs. People who come back.

They come for what Rex built — and that’s what they call him, not Mr. Frederick, but Rex — and they come for what he built then, and for what he’s built since, with his wife, Aileen, sweet from New Orleans, Louisiana. They come for the view from the rocking chairs on the porch on the front of the lodge in the cove some 3,000 feet high, the tendrils of the clouds touching the tops of the peaks. They come for the cabins made with logs and planks of cedar and pine. For the greeting from the ranch hands clad in dusty jeans and cowboy boots. For the family-style meals, the bell at the lodge ringing every day at 8 a.m., 12:30 p.m., 7 p.m. The smell of bacon in the morning that cuts through the cool air. The eggs and the fresh melon and the warm biscuits with the honey and jelly. The pulled-pork sandwiches and the coleslaw and the onion rings. The pot roast and carrots and the steak and baked potato and the corn on the cob and the homemade ice cream. They come for the hikes and the hayrides and the fishing and the horseback riding and the line dancing and the karaoke and the tubing on the river and the swimming in the pool and the soaking in the hot tub. They come for the 80,000 acres of trails and space, and for the cantina, too, where in the evenings beers are $3.50, wine is $4.50, and mixed drinks are $5.50, and all of it is based on the honor system, where the tab-tabulating tender of the bar is a person’s conscience, and where, on the wall, there is a poster of a cowboy’s rules for life.

“If you’re riding ahead of the herd, take a look back every now and then to make sure it’s still there.”

“Timing has a lot to do with the outcome of a rain dance.”

“Worryin’ is like a rocking horse. It don’t get you nowhere.”

It’s what dude ranches have become, and how Clear Creek feels. It’s a reminder, if you need one. These days, who doesn’t? 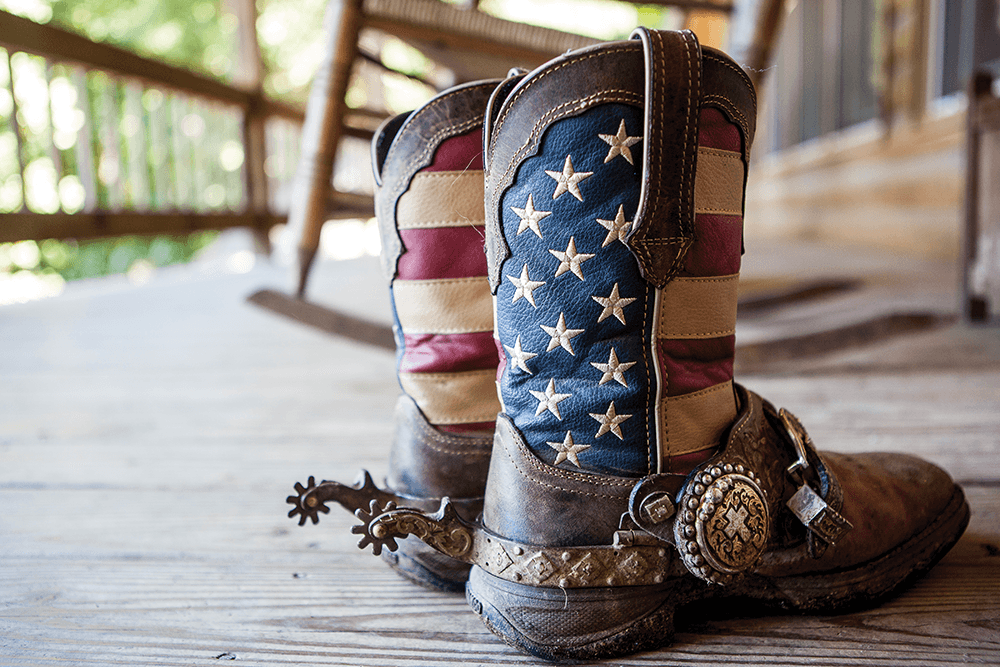 I didn’t want to ride a horse.

I’d never done it, or at least not since I was a toddler, which doesn’t count, because I probably didn’t have a choice, or didn’t know any better. Horses are huge. Here at the Clear Creek horse barn, on Good Time Lane down the hill from the lodge, I eyed Radar and Buck and Apollo and Chuck and Harley and Dusty and Snoopy and Kit. I listened to the low, steady, practically liquid sounds of the purposeful mastication of the equine eating of hay. Noses twitched. Snouts shook. The wranglers suggested an older, sure-footed brown quarter horse named Rocky, offering assurances of his proven, mild-mannered disposition.

Riding a horse well, they said, is not complicated. First? Want to. Next? Sit in the saddle. Stay in the saddle. You do well when the horse does well, and vice versa. Control what you can, and a little luck never hurt.

Rocky took me up the hills, into the woods, through the long, lush tunnels of rhododendrons.

“There is something about the outside of a horse,” Winston Churchill is claimed to have said, “that is good for the inside of a man.” I’ll say this, too: Riding Rocky, it struck me that the pace of this place is a horse’s walking gait. It gave me time to think.

I couldn’t stop thinking about the story Rex had told that morning at breakfast.

He was the second youngest of 15 kids. He grew up in Corner, Alabama, with its one red light. The family went to Birmingham to go to Sears. Three of his brothers fought in World War II — two in the Army, one in the Navy, in Europe and the South Pacific both. At home, in the evenings on Mondays and Thursdays during that time, his parents listened to the radio to the reading of the names of the dead. They didn’t know the government would have sent somebody to knock on their door first, Rex said, so they turned the dial, his parents did, and they sat still, twice a week for years, and they listened for the names of their sons.

In high school, Rex was strapping. He was all-state in football in Corner, and he led his basketball team to a state championship, but baseball might have been his best sport. He went to Auburn, where he was all-league in baseball, and basketball, too, in which he once snagged 27 rebounds in a single game. He averaged 14.3 rebounds a game in his career. That’s still a school record. He stood 6-foot-5, but when a shot missed and caromed off the rim, what made him go and get it, he once said, was that he wanted that ball more than everybody else did.

He worked as an assistant basketball coach at the University of Georgia, and then he worked as the head basketball coach at the University of South Alabama, but that was before there was big money in college sports, or in any sports at all, mostly, and so he started work as a mortgage broker. That’s what he did for 20 years. That’s who he was. Good job. Good living. Good life?

He and Aileen took vacations to fancy, lit-up cities, to New York, to San Francisco, to Las Vegas, and they boarded cruises to tropical climates, and they also went to dude ranches, and two of their sons worked at dude ranches in Colorado, and at some point Rex got to wondering. And this is when he started driving that black Buick of his north from Alabama on weekends, looking, waiting. To see what he was hoping to see. To just know the exact right spot.

Rex and Aileen built Clear Creek in 11 months and 20 days. The lodge went where he’d stuck the stick in the soil.

Rex stands up after meals, now, making announcements in his commanding, cornpone voice. Around here, he’s everybody’s grandfather, almost. He invites kids to come up and sit on his lap and tell the rest of the guests about the horse they rode or their tubing trip or what they saw walking all those trails. Everyone sings “Happy Birthday” to kids, and grown-ups, too, and even to the wranglers and workers. Some kids cry when they have to leave. Some of them write letters to the horses. Riding on Rocky, I thought to myself that most of those cowboy’s rules for life, on that poster pinned to the wall of the cantina, can pretty much be boiled down to this: Chase the right stuff, and don’t do it alone.

Life’s too short to be a mortgage broker. 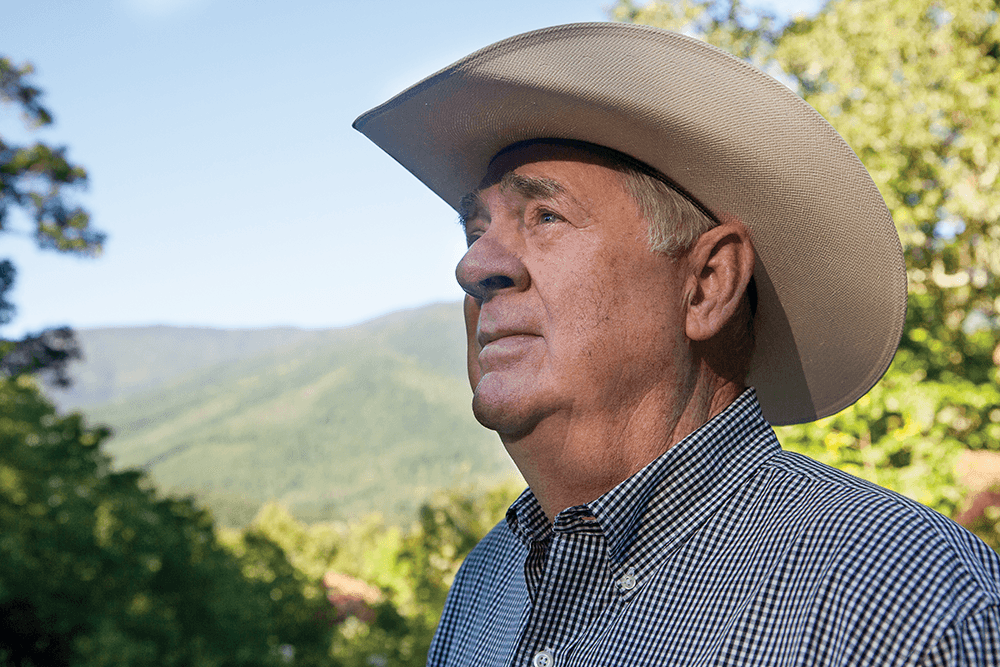 Back inside the lodge, I paged through Clear Creek’s dog-eared copy of Gene Kilgore’s Ranch Vacations: The Leading Guide to Guest, Resort, Fly-Fishing, and Winter Ranches in North America.

“Ranch vacations provide a way of renewing a connection with the land, with wild nature, and with animals,” Bayard Fox of Bitterroot Ranch and Equitours wrote in the foreword. “Ranch life is the antithesis of Disneyland and television, which dishes up the artificial in ever shorter snippets for shrinking attention spans; ranches offer the real, rather than the virtual. … It is a good atmosphere in which to reconsider the modern obsession with short-term goals, which are so often at odds with long-range achievements.”

Kilgore included in the book a letter from his father.

“Dude ranches to me,” his father wrote, “are contagion of friendliness in an environment of natural beauty. It is here where we can be relieved of stress and where each day can be filled with joy and peace instead of the constant agitation of cell telephones, television, and emails.”

Across the big, open room, in a guest book on a table on the side of the dining area, I read through the testimonials.

“Clear Creek Ranch has been my favorite place for a long time.”

“I loved riding and my husband loved relaxing. We both got what we needed.”

A little while later, sitting in the lodge, Rex and Aileen admitted this was it — not for Clear Creek, but for them.

It was, the 77-year-old Rex admitted, “about time to retire.”

He’s had prostate cancer. She’s had breast cancer. He shuffles, Rex does, in his flannel shirt, his blue jeans and his black Rockports, steadying himself at times with his hands on the backs of chairs. He had an MRI coming up. His back. “I don’t know,” he said. “It just started hurting.” He rode horses from 3 years old to three years back. No more.

“This will be our last season,” Aileen said.

Rusty and Diane Oleszewski are the new managers. The transition is hectic, Rusty said, but “business is good.” Outside, in the gray light, puppies named Bowie and Crockett frolicked in a soft wind. Seasons change. The ride goes on. 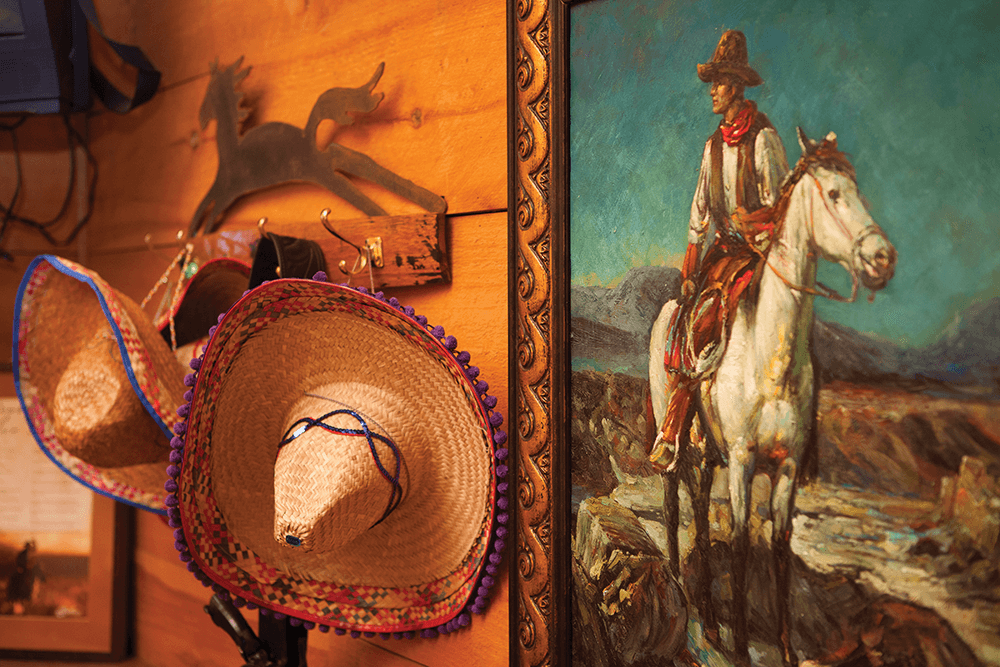