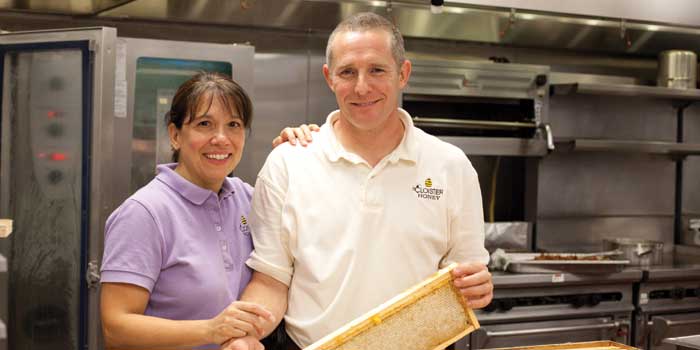 There’s a lot of life at home with Joanne Young and Randall York. In their 1950s ranch house live two adults, two teenage college students, three dogs, one cat, and about 2 million bees.

OK, the bees aren’t actually in the house — or in the yard anymore, either. But Cloister Honey started with two hives in the couple’s backyard in The Cloisters, a suburban neighborhood in Charlotte. Today, Young and York own 40 hives scattered across the Piedmont, from Mint Hill to North Wilkesboro.

At home, you can see what the bees do with all that hive time: Jars of honey, from pale straw to deep red, sit in a sunny window and beeswax candles fill tabletops. Before Young sits down with a visitor in the kitchen, she moves her husband’s beekeeper’s suit off a chair.

If York’s bee business gets overwhelming, Young only blames herself. She started it.

The couple met in the banking business more than 10 years ago. Back then, York worked in technology, but after all the bank mergers, cutbacks, and outsourcing, he started to worry about job security.

York’s family was in the moving business in North Wilkesboro, so he started a moving company, Southern Moving, on the side. Managing two full-time jobs was rewarding but stressful. About five years ago, York’s wife decided to get him something relaxing and fun for Christmas.

He loves taking care of things, she thought, and he loves to read books about technology and science. Maybe her husband would like some bees.

“It’s a little more interactive than an ant farm,” she says. She didn’t know anything about buying bees, so she started where everyone starts: she Googled “beginning beekeeping.”

She found Brushy Mountain Bee Farm in Moravian Falls, which sells equipment, and a class taught by the Mecklenburg County Bee Keepers Association. She bought two hives and signed her husband up.

Pretty soon, York was a bee nerd. The bees did so well, the couple started splitting up the hives. By spring, they had three hives. Then five. Then eight.

At first, they just kept the bees and gave the honey away. But soon, they had hundreds of pounds, a lot more than you can give away in four-ounce jars. So they started taking honey to festivals and farmers markets to sell.

They weren’t alone. All the interest in local food makes beekeeping a popular urban hobby, so there’s a lot of honey for sale. York and Young realized they needed a way to stand out. They hit on whipped honey, a thicker version made by forcing honey to crystallize. They flavor it with lemon, cinnamon, and chocolate. People snap it up at $8 a jar. York and Young make infused honeys, too, such as arbol chile.

These days, York is a long way from a desk job in banking. He runs his moving company all week, often taking a jar of honey to prospective clients. He and his wife also sell beekeeping equipment for Brushy Mountain and advise beginning beekeepers in Charlotte.

On weekends, York sells honey at the Atherton Market in Charlotte’s South End neighborhood. He always brings a display case full of bees to show off.

Young still works in banking, but she spends the rest of her time running Cloister Honey, selling the products at Charlotte’s Center City Green Market on Fridays.

“The bees work themselves to death,” Young says, “and we feel the same.”

See how honey makes its way from the Cloister Honey hives on the roof of the Ritz-Carlton Hotel in Charlotte to the hotel’s menu in this Our State video.

Video was produced for Our State by Jenny Tenney.

Cloister Honey
Charlotte
(704) 517-6190
cloisterhoney.myshopify.com
Call or visit the website for a list of farmers markets and retailers that carry Cloister Honey products.

Kathleen Purvis is the food editor for The Charlotte Observer.