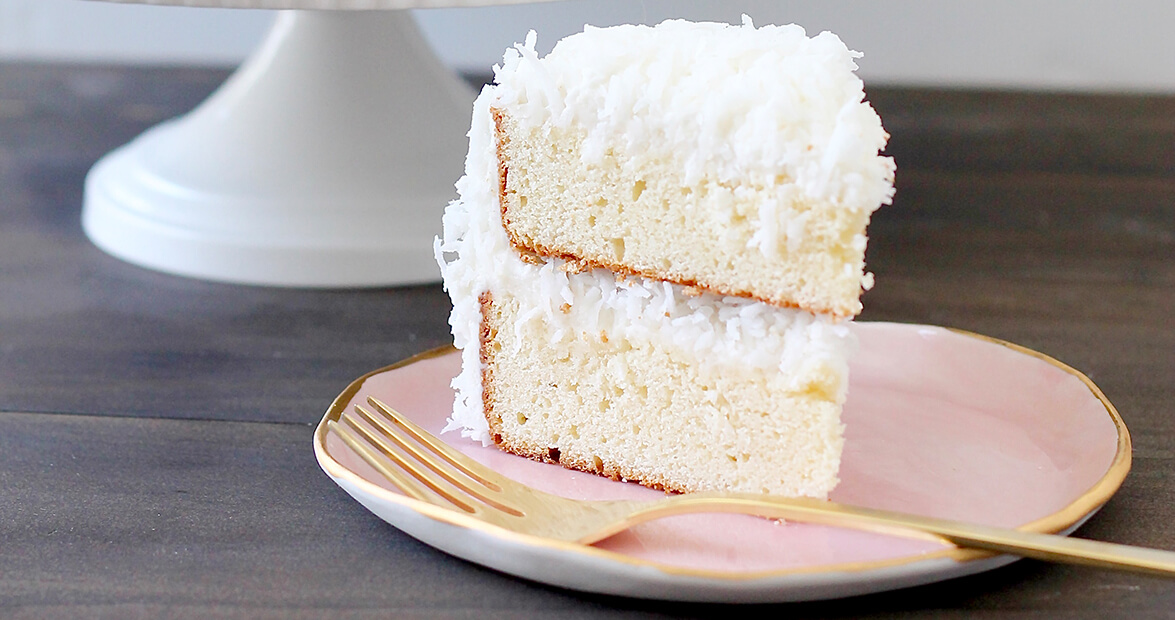 When I was informed the March 2014 issue of Our State magazine would be called “The Movie Issue,” I might have been a little excited about it. My very first job ever was working for a local movie theatre behind the concessions stand selling popcorn and colas. Just thinking about the prices back then really tells me how old I am today. Yes Virginia, there was a time when both drinks and popcorn could be had for less than fifty cents.

When I learned Ava Gardner would be featured on the cover of the issue, things just kept getting better. I knew she was born around Smithfield and knew about the Ava Gardner Museum. My family spent a few years in Smithfield before I was born and I’ve heard plenty of stories about that area.

I had the brilliant idea to run an Internet search to see if there was any mention of Ava Gardner’s favorite foods. Sure enough there was. True or not, one site mentioned that she loved coconut cake and fried chicken. I had my recipe ideas for the month. Now, I just needed a good coconut cake recipe to go with it.

When I go to a family reunion, or maybe church homecoming, this is the type of coconut cake I want to see on the dessert table. One look, and here’s what I imagine:

This coconut cake was made by a dear, older mother or grandmother who has been baking for years. Sure, she wants it to look good, but she’s more concerned with its taste.

As a young child, she learned how to make this cake standing beside her own mother. She’s never used a recipe, though now her mind wonders if she’s somehow forgotten a key ingredient.

All through the years, she’s heard people talk about how great her cakes are. She just smiles, often looking downward as if embarrassed. But her heart is made happy as she tenders, “Thank you.”

Everybody watches out of the corner of their eyes when her cake arrives. Some even strain their neck a bit, to see exactly where it gets placed among the others on the banquet table. Hers will surely be the first empty cake plate on that table, and you have already devoured your slice in mind.

Is this the cake Ava Gardner enjoyed so much? We can’t know for sure, but it’s safe to say it’s possible. The recipe below comes from a little booklet distributed by the Franklin Baker Company with “Baker’s Coconut Recipes” printed on the cover. Dated 1924, it’s highly possible the recipe was popular during Ava’s youth. Who knows, maybe her mother made her coconut cakes using this very recipe. It’s fun to imagine!

The booklet called for “Baker’s Coconut, Southern Style.” This sweetened and canned coconut product is no longer available (that I could find), so we’re going to adapt the recipe a little with regards to the actual coconut used. I think you’ll enjoy the cake and I hope you give it a try.

Ready for a slice? Alright then, let’s get cooking. 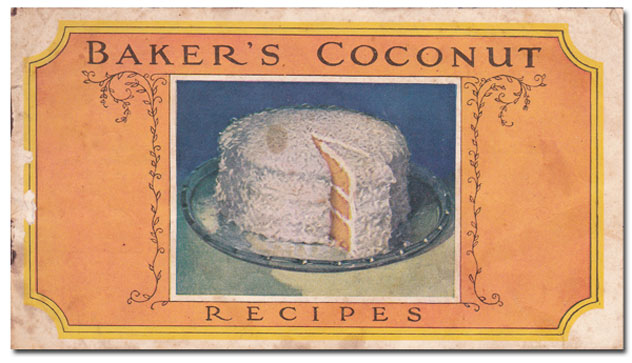 Here’s the cover of the little recipe booklet. I picked this up at the weekly auction I attend just a couple of days after realizing I would be making a coconut cake. I bid on a small box of old papers and was happily surprised when I found this towards the bottom of the box. What are the odds that would happen? I had no idea it was in the box when I bid on it. photograph by Steve Gordon 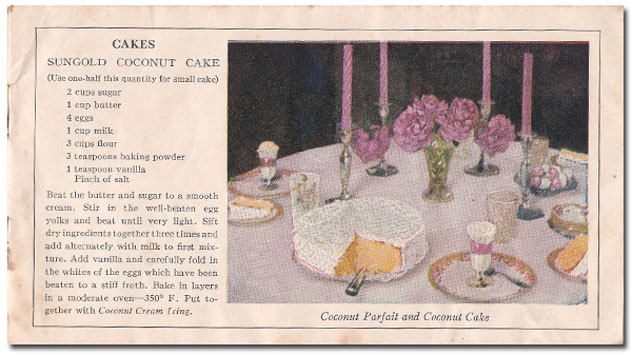 This is the recipe for the “Sungold Coconut Cake” that we’ll make below. It appears to be just one thick layer in this picture, but I’m baking it in two 9-inch cake pans with plans to split each layer in half. I adapted the recipe for the icing because I needed more than what the recipe called for. photograph by Steve Gordon 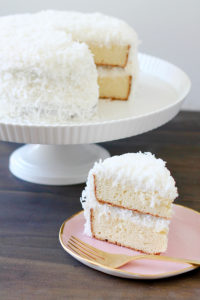 1. Preheat oven to 350º. Grease two 9-inch round baking pans. Coat with a light dusting of flour.

2. Add flour, baking powder, and salt to sifter. Sift three times into a large mixing bowl, making sure not to compact flour. Set aside.

3. Cut butter into cubes and place into another large mixing bowl. Add sugar. Cream butter and sugar with mixer until smooth.

5. Add small portions of flour and evaporated milk to mixture at a time, beating between each addition until just mixed.

8. Let cake layers cool in pans for 10 minutes before removing. Remove from pans and continue to let cool on wire racks.

9. Remove domes from cake layers with serrated knife and trim edges as desired.

10. To make the icing: Add confectioner’s sugar, 4 tablespoons heavy cream, and vanilla extract to a large bowl. Mix together. Add remainder of heavy cream, a tablespoon at a time, until icing reaches desired consistency.

11. Spread icing across bottom layer of cake. Sprinkle with a portion of the coconut. Add second layer of cake and cover top and sides with icing. Cover cake with remaining coconut, pressing gently to help it adhere.