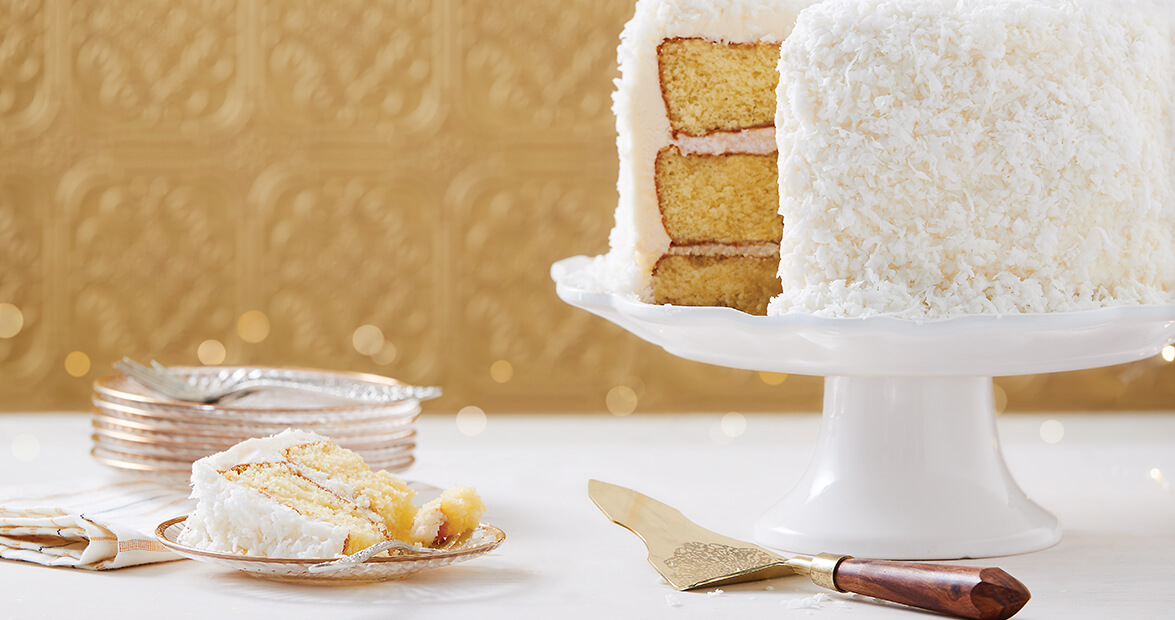 “I’ve got a few minutes to kill, so I’ll whip up a coconut cake for us,” said no one, ever.

The only spontaneous thing about a coconut cake is our delight. It takes time and talent to make one, and in our grandparents’ day, it likely required a train or truck. A coconut’s hard shell served as fitting luggage for the tropical treat’s long journey inland. A barrel of coconuts could work its way from one end of North Carolina to the other, even into mountain hollers and to the ends of country roads, an exotic souvenir destined to become the ultimate Christmas indulgence: a big coconut cake. Even in these days of packaged convenience, no plastic bag compares to the ceremony of opening a fresh coconut.

Cracking a coconut is like popping a water balloon that has the skin of a bowling ball, without spilling the all-important coconut water held inside. I recall ladies at my hometown Winn-Dixie in Boone holding the holiday season’s fresh coconuts to their ears and shaking them to listen for the sloshing contents, like excited and curious children speculating on gifts under the tree.

Come cake time, the baker and/or the household handyperson takes up hammer and tenpenny nail, or screwdriver, or awl, and a working knowledge of basic mechanics, and has at it, piercing the coconut’s eyes to release the liquid and then cracking open the shell to reveal the crescents of tender white meat. Pocketknives might come into play, and box graters soon serve as countertop sawmills. A coconut cake begins as a scullery project and ends as a shimmering white showpiece under a sparkling glass dome, promising a happily ever-after (after dinner, at least) for one and all. And as with any good fairy tale, the ending is that much sweeter because of the trials and tribulations our hero (in this case, our baker) has been put through. 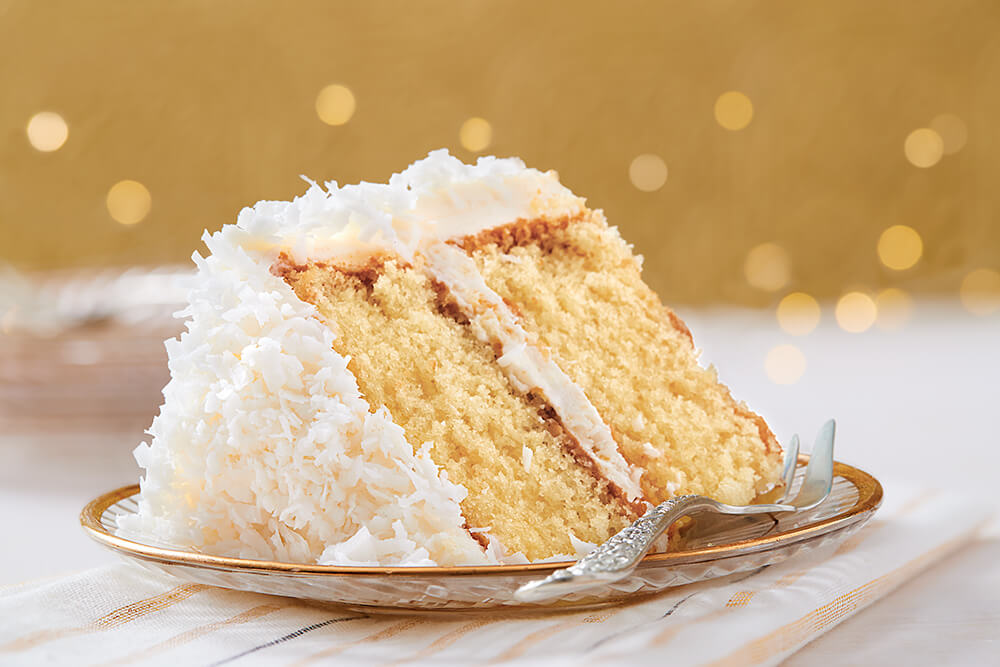 A dessert deserving of a pedestal: Recipes may call for a hammer, but don’t be daunted. This rich, sweet cake is worth the sweat equity. photograph by Stacey Van Berkel

Anticipation is part of the allure, too. The best recipes admonish us to let a freshly assembled cake sit and cure, and then chill for at least another day, ensuring that the delicate layers soak up each drop of the delicious coconut filling, giving the confection an even sweeter disposition. Waiting to open a gift is hard, but that’s a big part of the fun.

Perhaps no family recipe is more elusive and coveted than the one for coconut cake. Good bakers were suspected of leaving out critical details or secret ingredients. Maybe so, but it might be nothing more (and nothing less) than the fact that their cakes were baked for us as a gift of love, and that doesn’t fit on an index card. However, if you wind up with the recipe — the real recipe — you’ve received an inheritance more treasured than the family silver.

Preheat the oven to 325°. Grease (with shortening) and flour three 9-inch cake pans.

To make the cake: Heat the milk and butter in a small saucepan over low heat, stirring constantly, until the butter melts. Remove from the heat and set aside to cool to room temperature.

Whisk together the flour, baking powder, and salt in a medium bowl.

Beat the eggs and 3 cups of sugar in a large bowl with an electric mixer on medium-high speed, until the mixture is thick and pale yellow in color, about 3 minutes, stopping midway to scrape down the sides of the bowl.

Using a spatula, stir the flour mixture into the egg mixture, stirring just until combined. Add the cooled milk mixture and the vanilla and almond extracts, and stir until smooth.

Divide the batter evenly among the prepared cake pans. Bake until the tops of the cakes are golden and spring back when touched, and the sides of the cake begin to pull away from the pan, about 25 minutes. Cool in the pans for 10 minutes. Turn out the cakes on racks and cool to room temperature.

To make the buttercream and filling: Beat the butter, vanilla, and coconut flavoring in a large bowl with an electric mixer on medium speed until smooth. With the mixer running, gradually add the powdered sugar and beat until smooth, scraping down the sides of the bowl often. The buttercream will be very stiff; beat in cream of coconut, 1 tablespoon at a time, until it is creamy and spreadable. Set aside 1 cup of the buttercream in a medium bowl to use in the filling. Cover the rest of the buttercream with plastic wrap and set it aside.

Make the filling by stirring 1½ cups of coconut into 1 cup of reserved buttercream. The filling should be spreadable, so stir in remaining cream of coconut as needed.

Make coconut syrup by simmering the coconut water and the remaining 2 tablespoons of sugar in a small saucepan over medium-low heat, stirring constantly, until the sugar dissolves. Remove from the heat.

To assemble: Place one of the cooled cake layers on a serving plate or cake stand. Tuck strips of waxed paper under the cake layer to keep the edges clean. Brush or drizzle about 2½ tablespoons of the coconut syrup, and spread the top with half of the filling.

Cover with another cake layer, brush or drizzle about 2½ tablespoons of the coconut syrup, and spread with the remaining filling.

Cover with the last cake layer, brush or drizzle with the rest of the coconut syrup, then spread the top and sides of the cake with the buttercream.

Cover the cake with the remaining 2 cups of coconut, pressing gently to help it adhere. When all of the coconut is on the cake, gently pull out the wax paper strips.

Cover the cake loosely with plastic wrap and chill at least 24 hours before serving.

Fresh coconuts are available year-round, but October through December is their peak season. A ripe coconut should feel heavy for its size. You should be able to hear the water sloshing inside when shaking the coconut.

To open it, use an ice pick or a clean screwdriver to punch holes in two of the three indentations (the “eyes”) at the top. Drain the coconut liquid into a bowl. Use a hammer or meat mallet to crack the shell and break the coconut into large pieces. Then, use a knife or screwdriver to pry the meat from the shell. Remove the dark, papery outer skin with a vegetable peeler. Shred the coconut meat pieces with a box grater or in a food processor.

If your coconut does not contain enough liquid for your recipe, you can buy coconut water in the beverage section of most grocery stores.