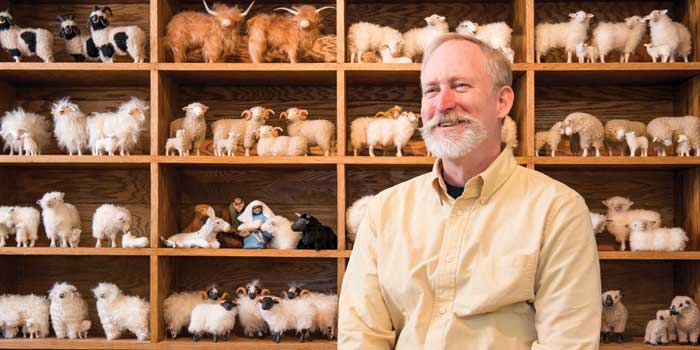 There is scarcely room for two in the working space of Colin’s Creatures, especially when Colin Richmond is midcreation, as he is this afternoon. He has an inspiration for a new sculpture: a mother ewe licking her lamb. He happened upon the image in his files — tongue to ear, mother to child — and he knew he must bring it to life. He’s sketched and envisioned for three days, and now he’s carved out the first mold, a negative impression of what will eventually be the porcelain-cast figure of the doting mother.

“You never know where your next idea will come from,” Richmond says.

Richmond, an MBA-turned-sculptor, has traveled to the Netherlands and Wales, among other places, to meet the sheep (and the people who raise them) that will inspire his upcoming creations. He takes those impressions and experiences and brings them to life through his mixed-media sculpture.

Richmond has owned shops in Asheville and England. He’s participated in trade shows from Dublin and Glasgow to Atlanta. But the historic Kenilworth community in Asheville is home for the artist, and Richmond appears content with his comfortable, familiar surroundings.

He may be only a mile from the busy Biltmore district, but Colin’s Creatures is a world removed from the well-dressed windows and storefronts of downtown Asheville. For two decades, traveling the world has been part of Richmond’s effort to recreate the authentic rare-breed farm animals — sheep mainly, but others, too — that inspire his unusual art form. Richmond’s pieces reflect their custom quality, and they are high-end, ranging in price from $40 to $600.

To begin, Richmond stirs a gallon-size jar of porcelain. He pours the smooth, clay-colored liquid into handmade molds, fastening them together with a large rubber band, and then he sets a kitchen timer, which dings when it’s time to release the creature from its formative binding.

Porcelain is just one of the keys to capturing what Richmond describes as the “expressive nature” of his animals, which have porcelain heads and legs and solid hydrostone bodies. Expression is what draws people to his animals in the first place, he says. Of all the animals he makes, sheep — for reasons he’s not quite pinpointed — seem to be the most expressive. Seeing turns into believing and, of course, buying. “People buy what speaks to them,” he says. “I don’t go for cutesy. It’s the personality.”

Richmond has mastered his process over time, taking into account everything from a 14 percent porcelain shrinkage after firing to the varied coloring of realistic wool and mohair, and how thickly it’s applied. “To me, it’s a big puzzle. How do I recreate this animal?” Richmond says.

Plaster molds of the animals are organized in white crates by country of origin: Scottish Islands, Germany, Italy, Spain, and many more. Depending on the sheep’s breed and homeland, each carving’s personality is born, Richmond says.

He chronicles his travels with online photo albums, and he touts his latest inspirations with a “what’s new” category on his website. And then, he simply enjoys the ride — and all the interesting folks he meets along the way.

The sheep farmers he’s met, Richmond says, “are the salt of the earth.” The life of the sheep artist, however, has proved distinctly sweet.