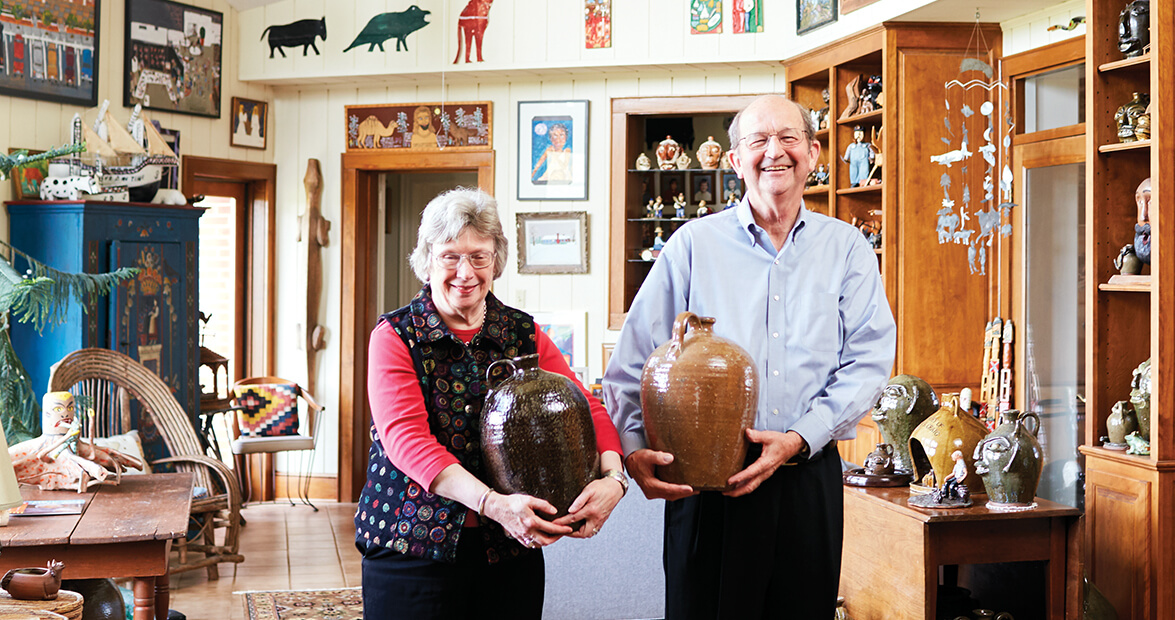 Among the artwork on the third floor of the Hickory Museum of Art is an arresting image of a casual young man wearing aqua pants and a striped purple-and-green shirt. His lips are full and red, as is his rakish shock of hair. Most notable is the subject’s posture: an arm behind the head, reminiscent of Pablo Picasso’s modern masterpiece Les Demoiselles d’Avignon.

The full-scale picture is unabashedly personal, as if the artist imagined himself as a seductive young man on a beach in the South of France. But Harold Crowell, the artist responsible, has probably never been to France, and he’s not able to read this article. For more than 40 years, he has lived in the J. Iverson Riddle Developmental Center in Morganton, about 25 miles west of Hickory. In spite of cognitive and verbal impairments, he possesses a visionary spirit that finds expression with bright colors and a Modernist line style.

That Crowell’s haunting self-image has a permanent home in Hickory, in an art museum housed in a converted high school, is a testament to four decades of passionate collecting by Allen and Barry Huffman, a local couple who are among the most important conservators of folk art in the nation.

“We were going home with souvenirs,” Barry says of her and her husband’s earliest forays into folk art collecting. “We were just finding things to live with, and that was how it started.” 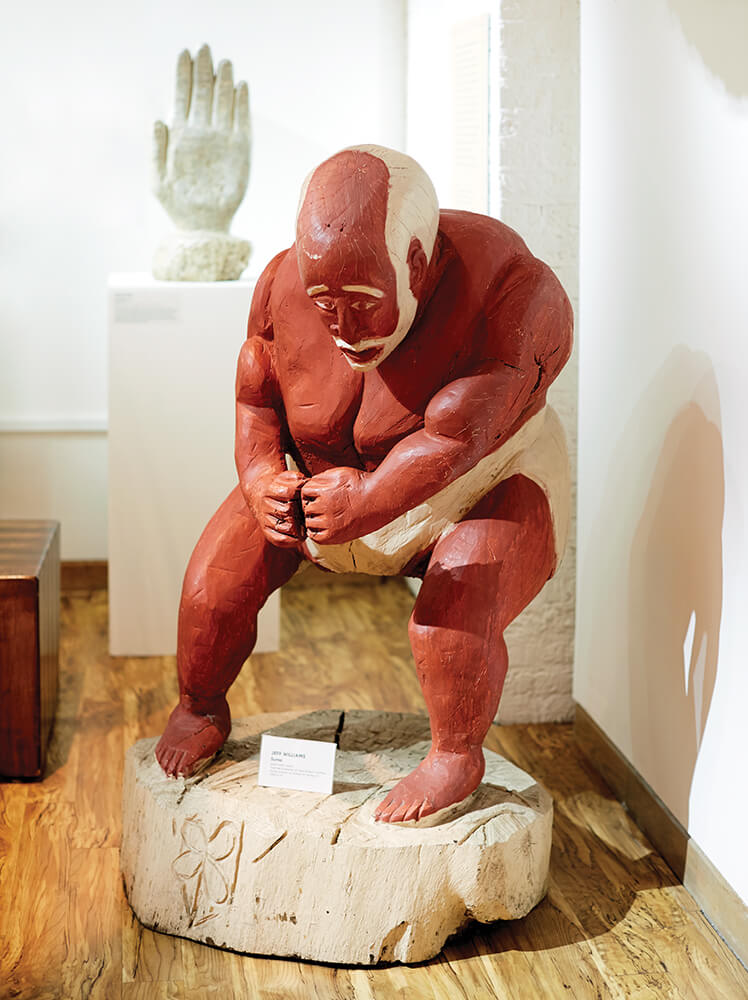 Jeff Williams, a wood sculptor from Salemburg, carved this figure of a sumo wrestler, which is on display at the Hickory Museum of Art. photograph by Stacey Van Berkel

David Steel, curator of European art at the North Carolina Museum of Art (NCMA) and a longtime friend, compares the Huffmans to ethnographers like Alan Lomax, who discovered, recorded, and archived the folk music pantheon, from the Carter Family to Lead Belly. “Barry has one of the best eyes I’ve ever seen,” Steel says. “She has taste to bring to the table, and Allen has the bedside manner, being a doctor. He’s a people person.” Barry is also a prolific painter in her own right; she’s self-taught and works in a folk idiom.

Collecting folk art, made by untrained, often older, almost always poor and poorly educated people, became the rage in the 1980s. The Rev. Howard Finster, a celebrated Georgia visionary artist, collaborated with high-profile bands like R.E.M. and Talking Heads. Shortly afterward, Finster’s profile rose higher with an appearance at the Venice Biennale, one of the world’s most famous exhibitions of contemporary art.

The hipster musicians were following a path blazed years earlier by a loose network of enthusiasts, including the Huffmans. Both graduates of the University of North Carolina at Chapel Hill, they settled in Hickory after Allen’s three-year stint in the military. Beginning in the late 1970s, the couple devoted many weekends to road trips, accompanied by their two children. As adolescents, however, the children found their parents’ hobby discomfiting. Upon seeing the latest strange acquisition in the house, they’d yell, “You’ve gone too far!”

Over time, the Huffmans developed relationships with the artists they met. Allen, an obstetrician-gynecologist during the week, took photographs of the artists, and in 1983, Barry, who was trained as a physical therapist, began to interview them.

“There are no rules to folk art. You don’t have to have education to understand it or appreciate it.”

Like the Huffmans, Steel also traveled the back roads in those years. He was often in the company of Roger Manley, who today is the director of N.C. State University’s Gregg Museum of Art & Design, which also houses a significant collection of folk art. In 1989, Steel and Manley put on a landmark show at the NC Museum of Art called “Signs and Wonders,” which featured many of the artists who form the modern folk canon, including Crowell, Wilson County’s whirligig master Vollis Simpson, stone sculptor Raymond Coins, and sculptor and self-trained naturalist Q.J. Stephenson.

Stephenson, who made sculptures from seashells, petrified wood, mica, and the occasional strategic rubber band, worked in a shop in Garysburg, near Roanoke Rapids. In his conversation with Barry, he reveals a deep and intuitive sense of the sheer vast mystery of the earth, born of a lifetime spent working with an earthmover.

“My whole life was digging in the earth, and I took an interest in the earth,” Stephenson told Barry in 1988. “That’s when I really learned something about the earth, by digging deeper and deeper. I learned that the ocean had been over the earth three times. Not once, but three different times through this section.”

Stephenson began recognizing petrified wood that originated in forests as far away as California and Canada, and he once found a walrus tusk that the Smithsonian Institution confirmed to be 4 million years old. Stephenson channeled his knowledge and his collection of natural antiquities into artwork that he sold at a facility he designed and built himself. He dubbed it the Occoneechee Trapper’s Lodge in Garysburg.

Stephenson died in 1997, but his lodge still stands, unoccupied and in grave danger of obliteration by time and nature. One of the Huffmans’ lingering hopes is that funding can be found to preserve or relocate the structure.

Some artists, like Stephenson, are fortunate enough to enjoy acclaim during their lifetimes. But there are heartbreaking tales among the Huffmans’ acquaintances, where the hard lives just kept being hard, despite the intermittent release of making art. Jeff Williams, a wood sculptor from Salemburg, described to Barry the rage and despair that fueled his drive to carve large pieces of wood into life-size African-American figures. His production won him no admirers from his friends and family, he said.

“First chance I get, get out of Salemburg,” Williams told Barry. “That I’m goin’ to do because people’s too connivin’. They’re not use to what I’m doin’. I’d heap rather be somewhere near sensible people and somebody that’s interested in my style of work, be livin’ somewhere like that.”

Today, however, the Huffmans have no idea where Williams is, or if he’s even alive. One thing Williams left behind: a magnificent wood sculpture of a sumo wrestler, which stands eternally en garde at the Hickory Museum of Art.

Despite the renown achieved by the likes of Finster, Simpson, and others, conservative tastes die hard. Steel laments that he couldn’t persuade the NCMA to build a collection of folk art. But in Hickory, museum director Lisë Swensson secured a $150,000 grant from the Institute of Museum and Library Services so that the folk art gallery could open in 2011.

Indeed, the crude technique and raw emotions — often of an ecstatically religious bent — have the power to unsettle. “There’s a lot of resistance. This art won’t make people money, and it won’t create careers,” Barry says. “There are no rules to folk art. You don’t have to have education to understand it or appreciate it.”

As if to underscore her point, Allen nods to a group of schoolchildren who are happily interacting with the art of James Harold Jennings, who lived in one of six school buses on his property (another bus was his studio, another a shop, another was for his cats, and so on).

“Where else can you find original things?” Allen asks. “We’re surrounded by mass-produced things. Kids totally get it.”

For the past decade, the Huffmans have taken steps to secure a safe future for their collection, notably by transferring more than 150 pieces to the Hickory museum in a carefully negotiated transaction. This spring, the Huffmans self-published a monograph, Hand-in-Hand: Visions & Voices of North Carolina Folk Artists, which contains Barry’s interviews with eight artists, along with Allen’s photos and images of the artwork. It’s a lovely, remarkable bookend to a lifetime of collecting, and Barry’s interviews make for riveting reading.

Perhaps some of the children who troop through the museum will carry forward an appreciation of the work that moved them when they were young, long after the greatest stars of 20th-century folk art have vanished from the scene.