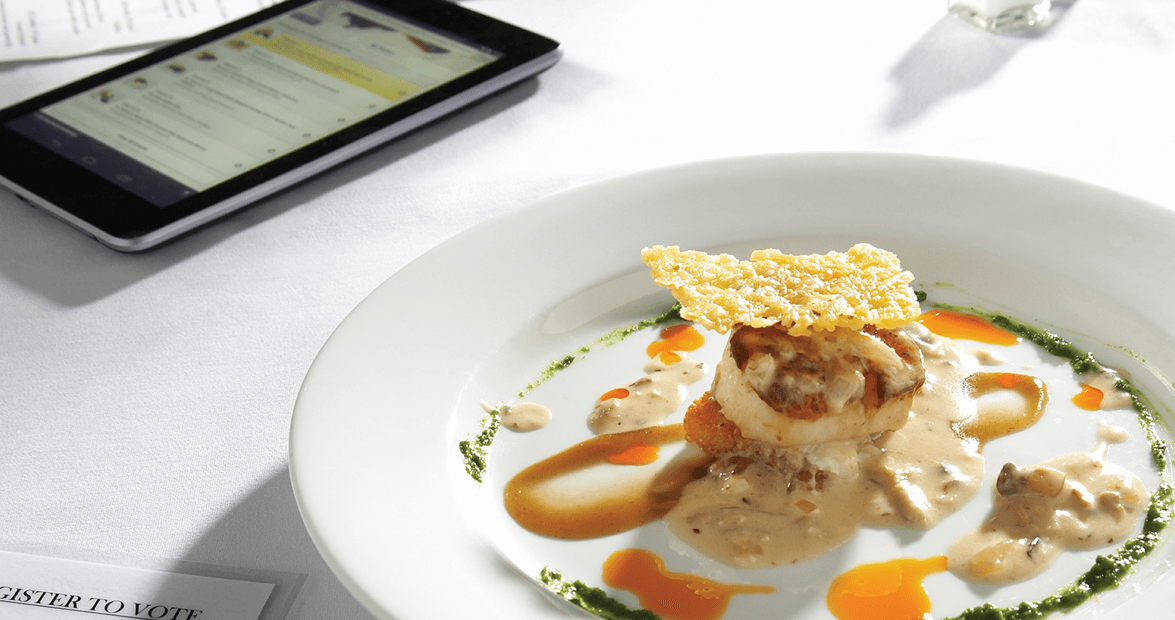 Jimmy Crippen, a goateed man gifted with gab like a morning radio host, weaves through a crowded dining room with a microphone. People sit elbow-to-elbow around tables cluttered with plates, wine glasses, bread baskets, and — in this modern age — smartphones. The audience, ranging from young professionals to those cashing out 401(k)s, is trendy but far from pretentious. Attire runs the gamut from polo shirts to plaid, jeans to khakis, sleeveless blouses to flowery dresses. Neckties are scarce.

Somewhere here at 1705 Prime, a chophouse and special events venue in north Raleigh, there’s an empty chair with my name on it. As Sinatra’s “Somewhere Beyond the Sea” plays, I settle in and listen to Crippen welcome everyone to the championship round of Fire in the Triangle, part of the Got to be N.C. Competition Dining Series. Crippen cooked up the concept about a decade ago while running Crippen’s Country Inn & Restaurant in Blowing Rock. 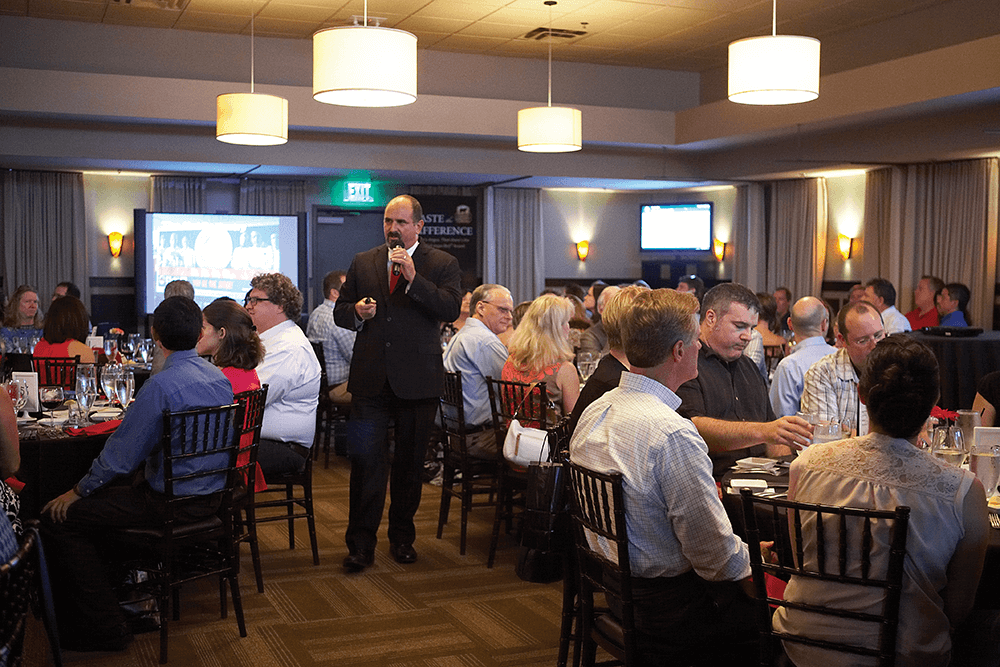 The phrase “competition dining” strikes me as a curious marriage of words. Check the dog-eat-dog attitude at the door, I say, and let’s break bread together. Avoid talking politics, steer clear of arguments, and always compliment the cook, even if the rice is crunchy. Tonight, though, this crowd is tasked with critiquing and grading the food, as if it’s some pageant contest. Jan Jewett, the woman sitting next to me, tells me that she and her husband, Jeff, have been to one other Competition Dining event — which is exactly one more than I’ve ever attended — so I looked to them for guidance, asking them all the obvious questions.

We have to score each plate presented to us by using an app on our smartphones, making this my first dinner ever to require an IT professional. The ballot includes zero-to-five rankings for presentation, aroma, flavor, execution, creativity, and use of two secret North Carolina ingredients: grits and Krupnikas, a Lithuanian spiced honey liqueur.

Each entrée has a mouthful of a name, obligingly recognizing the name-brand ingredients. Course one: Deconstructed Coquilles Saint Jacques. Course two: Old Mill of Guilford White Grit Flour Heritage Farms Cheshire Pork Ravioli. And so on. To pare it down to the pure essence, let’s just say that all of it was superb. A culinary masterwork. I’d just as soon give every dish a perfect five. How does one rate execution, anyway? And aroma? It all looks great, smells great, tastes great. Bravo! Seconds, please!

Not only are people dishing out scores on the entrées, they’re tweeting about them, for crying out loud. Heads tilt down, and faces glow in LCD screens. All the tweets scroll across monitors for the whole room to see, little missives peppered with “awesome” and “amazing” and “slam dunk.” Tweeting, like teeth flossing, doesn’t come naturally to me, and I would never think to do it while having dinner. But here I am, my thumbs pecking out pithy plaudits. “A foretaste of heaven,” I tweet about dessert.

In this age of TV shows like “Hell’s Kitchen” and “Iron Chef America,” it’s small wonder that cooks have risen from obscurity to celebrity, feeding the public’s admiration and making cooking cool. “The Cooking Channel and the Food Network have made chefs the hottest, sexiest profession there is, period,” says Crippen, who trademarked the phrase “competition dining.”

In 2005, as the Food Network’s “Iron Chef America” beamed the kitchen into our living rooms, Crippen bit into an idea. “I’m sitting at home watching these guys, going, ‘That’s pretty cool.’ And I’m thinking we can probably do that in a small town.” He made a go of it during the Blue Ridge Wine and Food Festival in Blowing Rock. After a couple of years, he says, “I had more chefs than I needed, and I had to come up with a way to eliminate them.”

He tweaked the “Iron Chef” recipe to include elimination rounds, which he thought was more fun anyway. The competition’s popularity quickly spread — it’s now a statewide sensation with yearly championships in Raleigh, Greensboro, Charlotte, Asheville, and Wilmington. This November, the winners from each region face off in the “Final Fire” in Raleigh. “There is nobody else in the world doing this formula,” Crippen says. “Nobody is doing full-on, multimedia, interactive dinners.”

Again, another curious marriage of words. Multimedia dinners? Texting and tweeting at the dinner table strikes me as tacky — a fly in the etiquette étouffée. But here, not only is smartphone use encouraged, it’s protocol. I witnessed myself transform from a fuddy-duddy into a foodie, feeling hipper with every hashtag. 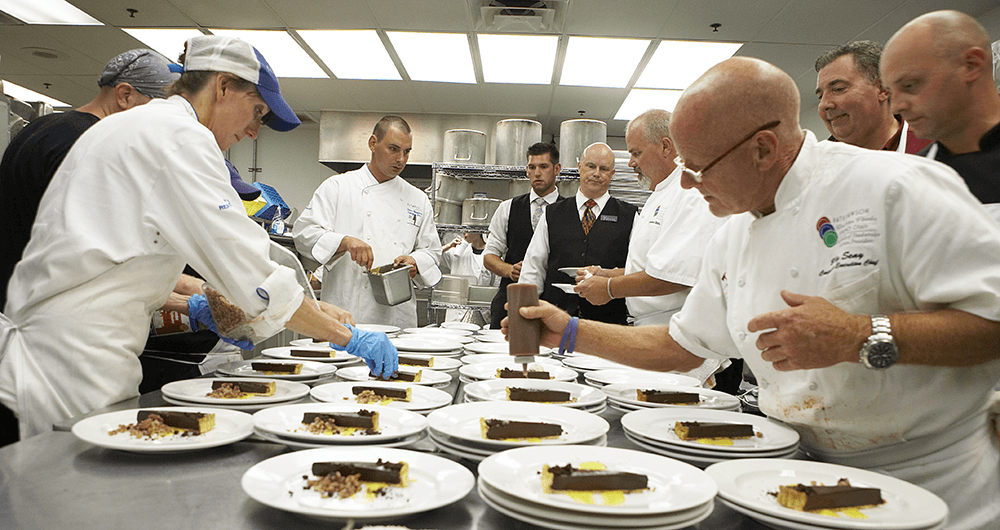 A champion is crowned

The time has come to surrender our plates, cast our final votes, and crown a winner. Dean Thompson, the reigning champion, emerges into the dining room already wearing the coveted red jacket, his kitchen crew forming an entourage. People clap, whistle, and yell “woooo!” He stands before the crowd for a Q&A with Crippen. The exchange could be an interview on ESPN.

Crippen: “What were your challenges today?”

Thompson: “We had a game plan, and we were just gonna work hard today. We put a lot of work in, a lot of components. This is by far our toughest battle. We wanted to bring it.”

The crowd eats it up. Cue the applause. And then Crippen pumps up his pipes to introduce Thompson’s challenger. “The man who’s trying to knock the king off his mountain! The matadoooor!”

A Spanish bullfighting song plays as Steve Zanini, wearing a white jacket, strides through the room. “Bring him on out!” Crippen bellows. “Bring out the bull!” People clap, whistle, yell “wooo!” The Q&A sounds like another postgame interview.

It’s a close race, but Dean Thompson (crafter of the crusted venison and the smash-hit Snickers cake) will wear the red jacket for another year. He’s the first chef in the Competition Dining history to win for a second year in a row. The crowd erupts in applause. Freddie Mercury belts out “We Are the Champions.”

That’s when it hits me like that 80-proof spiced honey liqueur. Gourmet cooking is itself a great skill, one that demands patience, discipline, and imagination. We cheer on sports figures and entertainers because we put such a premium on their product. Competition Dining gives chefs — whose product we most certainly value — a proper place at the pop-culture table. “That’s what it’s all about,” Crippen says. “We’re celebrating the chefs, we’re celebrating the farmers, we’re celebrating the diners.”