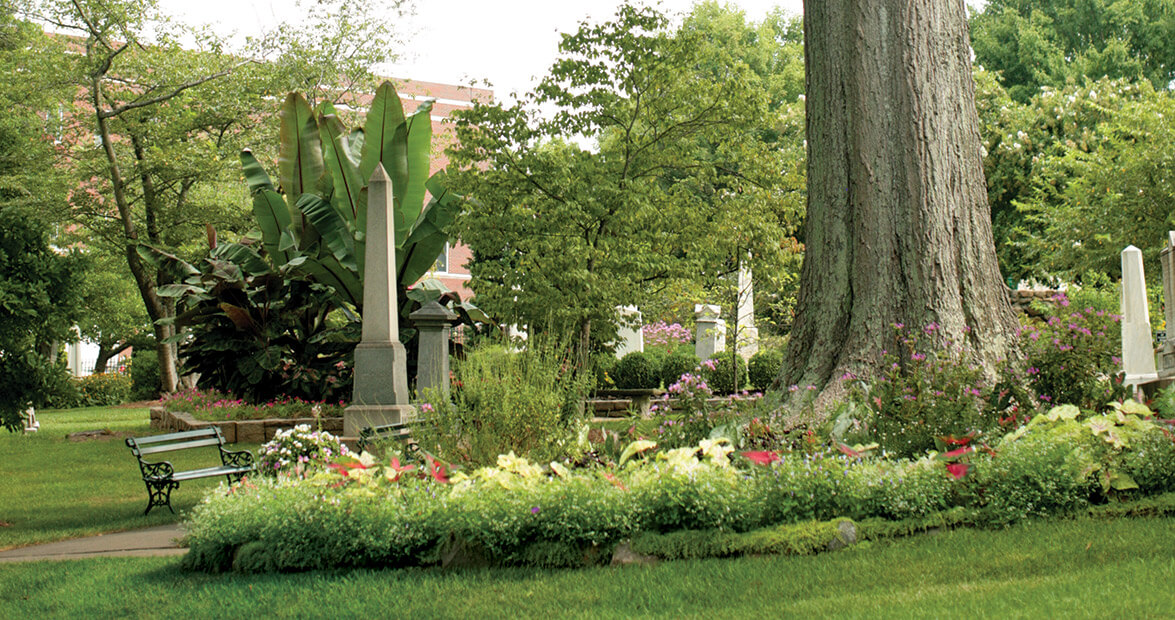 Ronnie Goforth pauses. The brief silence lends emphasis to his story. As Memorial Garden’s head gardener for 17 years, he knows its history by heart. He tells about the forefathers of Cabarrus County and the town of Concord who rest here eternally. “They did everything,” he says. “It’s amazing to go through and tell the stories about the folks who are buried here.”

He crests a hill and pauses again, in front of a raised cement box covered with graffiti-like carvings. This one’s his favorite.

In November 1827, the circus came to town. When it packed up and left, one equestrian from Edinburgh, Scotland, stayed behind. George Yeaman suffered a fatal accident during his performance.

Sympathetic members of the First Presbyterian Church offered him burial in their cemetery. Thousands of miles away from home, he found a resting place. Over the years, as the circus cycled through town, other performers stopped by to pay their respects, often leaving their mark on Yeaman’s grave.

Stories like this one, personal and moving, fill Memorial Garden. As the graveyard for First Presbyterian Church, it’s a place centered on death, but it’s also full of life. On these three acres, located on Spring Street in downtown Concord, magnolias tower, dogwoods bud, and tulips bloom — providing comfort and warmth to a place that is often harsh and cold.

Paths twist through flowerbeds, past fountains, and into separate little nooks. Pavers lead to the columbarium — a brick structure holding individual niches where interments now take place — with a sprawling Confederate jasmine vine for a centerpiece. For thousands of visitors every year, Memorial Garden is a destination. Brides and prom couples pose for portraits, and businessmen find respite on their lunch hour.

“When they’re here, they can escape,” Goforth says. “That’s what people usually do. During their visit, you can talk with them, and they say, ‘Oh, I’m just escaping my life.’ ” People find escape in this garden filled with tombstones.

But Memorial Garden doesn’t feel like a cemetery. Yes, the tombstones all face east, properly positioned to see the second coming of Christ. But there are no geometric rows with identical granite markers standing like soldiers in formation.

At the beginning of the 19th century, church members purchased this plot for 25 shillings, Goforth says. In 1810, they built the first church building — a 12-sided log structure — on the highest point. A second building, made of brick, took the original’s place on the same site in 1837. A sundial now marks the spot where these two sacred houses once stood.

The garden owes much of its current beauty to the Phifer family. In 1930, Sallie Phifer Williamson, of Williamson tobacco wealth, hired someone to restore the cemetery after it fell into disrepair following the Civil War. She renamed it Memorial Garden in memory of her mother. Williamson’s son, Marshal, maintained the garden until he died in 1966. Before his death, he created a trust fund to ensure the garden’s continued upkeep. This past summer, rose-colored wave petunias and impatiens, in a shade called lipstick, spilled out of the flowerbed around the Phifer monument.

‘A good kind of work’

Goforth, a Cabarrus County native, takes pride in the garden as if he’s a member of the Phifer family himself. “I was in college to be a wildlife biologist and kind of changed things up a little bit,” he says. “I always liked the outdoors and plants and all. I’m kind of more of an animal person than I am plants, but I’m stuck with plants.”

The garden changes with the seasons. As the weather warms or cools, Goforth plans the next landscape. He makes “secret notes,” scribbled in pencil on a yellow legal pad with codes only he understands. Squiggles for trees and letters for various perennials — H for begonia, J for verbena, G for zinnia.

Every fall, he and his staff plant about 12,000 new tulip bulbs. Goforth thumbs through Pete J. Rotteveel’s Flowerbulb Catalog, finds his favorites, and orders them from Voorhout, Holland. The varieties he chooses have names like Shirley, Esther, and Mrs. Scheepers — fitting for the beds surrounding graves of proper Southern ladies. In the spring, the elegant tulips delight crowds of visitors.

But in the fall, Brenda Hopson knows she’ll spend hours in the dirt, planting unassuming bulbs. She’ll finish the day covered in soil, her hair sweaty under her ball cap and her deep-red fingernail polish chipped. For 12 years, she’s worked beside Goforth, always aware of the delayed rewards.

“We go through the planting ordeal, and then we get excited in the spring when they come up,” she says.

“It’s work, but it’s a good kind of work.” And Goforth manages to lighten the load with his sense of humor. The two lean on each other throughout the long days, telling stories and laughing as they work.

“Pruning is our big work,” Goforth says. “It takes us about three weeks to complete all the pruning when we start, and we have to do that three or four times a year. Add those numbers up; that’s two and a half months of nothing but pruning.”

But all the toil is worth it when Goforth revels in his favorite part of the job: “Dealing with the people, telling them all my stories,” he says. “Lots of times, landscapers do the work and see that it’s done but don’t get input back. But we get to hear the input.”

He gives novice gardeners advice and ideas for their personal projects. “I do plant a lot of things that you can have at your house,” Goforth says. “You go to some of the gardens, and they’re so stuck on exotics. And you can never get any of those plants unless you want to pay something crazy and ship it in from South America or something. I try not to do so much of that.”

He humors visitors with his anecdotes and occasional tricks. He reads one epitaph out loud, the words no longer visible, but Goforth recites them from memory. “Remember, friends, as you pass by, as you are now, so once was I. As I am now, so you must be. Prepare for death, and follow me.” If he’s feeling sneaky, he hides someone in the bushes, and they pop out on his cue.

He understands that the stories here, in addition to his landscape designs, give Memorial Garden its character. Goforth pauses as he walks beneath a willow oak that is more than two centuries old. Its trunk measures more than 16 feet around; four or five adults holding hands barely manage to embrace it.

“I give tours all the time, and sometimes I let the kids come over here, and it takes seven or eight of them holding on to reach around it,” Goforth says. On those tours, he tells them stories about the people who came to rest here when the tree was in its youth.

There are the prominent — Alexander F. Hurley fought for the Confederacy and became the county sheriff — and the shunned — Isabel Hadley lies atop the hill with no other graves around her, looked down upon as the widow of a traitor.

And then — there’s the equestrian.

All led different lives, but all came to rest in the same place.