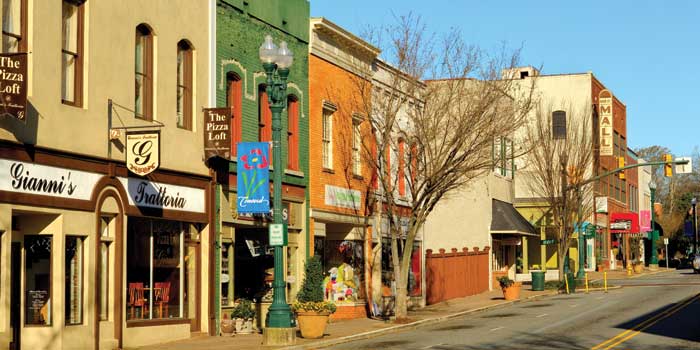 There’s a race this weekend somewhere.

And that means there’s action at Concord Regional Airport. It’s a Thursday morning, and a Boeing 737 carrying six race teams just took off for the Kobalt Tools 400 in Las Vegas, Nevada. Another race team took off earlier in the day. By the end of the day, nearly 500 people — some wearing uniforms, some not — will fly out of this 18-year-old airport, all in the name of NASCAR.

“It’s like a traveling circus,” Sam Bass says of the mini-exodus that occurs in Concord every weekend during racing season. From February through November, a slice of the nearly 80,000 folks who call Concord home picks up on Thursdays and flies to racetracks across the country to compete on the weekends. When the race is over, they return home to get ready for the next week. Sometimes on Sunday evenings, as many as 15 planes line up for their turn to land in this Piedmont town just northeast of Charlotte.

Bass attended 22 events last season and will go to as many or more this year. The 50-year-old has been in love with the sport since he saw his first race at Southside Speedway in Richmond, Virginia. Just a boy then, he decided he wanted to become a motor-sports artist, a career that didn’t exist until he created it. After commuting from Virginia for six years, Bass moved to Concord in 1990 with artistic aspirations and $500 in the bank. He knew where he needed to be to make it in the NASCAR world.

Within a 50-mile radius of the Charlotte Motor Speedway, which is in fact in Concord, you’ll find about 90 percent of the race teams that compete in the sport. Go to any restaurant near the speedway during lunch, and you’ll see an assortment of drivers, crew members, and NASCAR officials placing orders.

“I realize all the time when I go in the grocery store,” says Bass, who now owns a 10,000-square-foot studio across the street from Charlotte Motor Speedway. “You run into all of these people that are recognized as celebrities around the world, and they’re on aisle six looking at cereal.”

That says something about Concord. The race car drivers, who drive 200 miles per hour on 24-degree banks just inches apart and make millions doing it, still come home and shop for their own Cheerios.

Although NASCAR fuels his career, Bass will be the first to tell you that Concord’s Southern hospitality and generosity have just as much to do with his success. And he’s not the first person to make that discovery.

Concord means agreement and friendly relations. The town got its name because in 1796, Stephen Cabarrus encouraged the founders of the county that bears his name to compromise on the location of a county seat. They selected an area almost in the middle of the county and named it Concord in 1796 because it represented finding the middle ground among all parties involved.

Today, it’s a place that mixes the affluent with the workingclass, racing with shopping, and homespun with big city. And always, there tends to be some degree of harmony. Go to What-A-Burger #2 at lunchtime, and you’ll see individuals from all walks of life waiting in line for a Cherry Lemon Sundrop. It seems everyone agrees on something.

For a long time, people from elsewhere only recognized Concord’s name because they were either familiar with the textile industry or passed the exit while traveling Interstate 85.

Now, thanks to shopping and racing, more than 18 million people visit Concord each year. Concord Mills is a mile lap for walking; Charlotte Motor Speedway is a mile-and-a-half track for race cars — and both make Concord bigger than ever. Still, like many other small towns in North Carolina, Concord holds on to pieces of an old identity. A canopy of majestic elm and oak trees carefully guards the century-old homes on Union Street; the downtown cemetery has a garden where tulips bloom every spring; The Lions Club puts out flags on patriotic holidays; and one of the oldest buildings in town, the Historic Cabarrus County Courthouse, narrowly escaped being demolished and now thrives with art galleries, a museum, and a theater. Here, just a few miles northeast of the noise at the track and the mall, Concord is quiet and little.

This balance is what attracts folks like Sam Bass to build a life here, as it also encourages natives to linger.

Lin Barnhardt was born here and raised here. He works as the visual arts director for the Cabarrus Arts Council, which now is in that old courthouse building. Built in 1876, this structure is rich in architectural detail.

As Barnhardt walks around the four galleries on the first floor, he marvels at a piece by Arless Day; he’s thrilled that an artist as well known as Day is exhibiting in Concord. Barnhardt’s quiet demeanor disappears when he talks about art. He taught the subject for 30 years, 18 of those for Cabarrus County Schools. And he’s an accomplished artist.

When he retired from teaching in 2006, he planned to focus on his art full-time, but the position at the arts council opened, and he couldn’t resist the opportunity to share art with the community that’s always supported him.

“It’s my time to pay back and to give back,” Barnhardt says. “I think for some of our people, maybe they’ve never been in a commercial gallery or maybe some people haven’t been to a museum. Now, they don’t have to travel a long distance. They can see really good artwork here.”

As Barnhardt walks across the street to Union Street Bistro for lunch, he points to a building that once housed the record shop where he bought his first Beatles album. He talks about how fascinated he was with the printing presses at The Concord Tribune, now The Independent Tribune, when he was a little boy. And he remembers when Soupy Sales made an appearance at the Paramount Theatre downtown.

The memories keep coming, when suddenly Barnhardt stops in midsentence and says, “Look, look.” Walking on the street is Scott Avett, a former student of his and a member of The Avett Brothers band — and also a Concord native.

“He took art from me in seventh grade,” says Barnhardt, who also taught Scott’s brother, Seth. “I was really surprised the day when they did registration for eighth grade, and Scott took chorus. I thought, ‘Are you kidding me?’ He was so gifted [in art].”

Going away, coming back

Michael Eury darts into the Concord Museum wearing a jet-black suit and a royal blue shirt with a power tie. He just gave a presentation of his recently published book, Images of America — Concord, to a group of “little old ladies” at the local O’Charley’s restaurant.

This spring, the Historic Cabarrus Association moved the museum from the old Belk building downtown to the historic courthouse across the street. Volunteers spent hours putting photos in boxes and cataloging books on computers.

With his mid-Atlantic accent, Eury doesn’t sound like a Concord native. But he is indeed from here. He’s lived in New York and Philadelphia, Pennsylvania, and Portland, Oregon, but now that he’s back, he’s quick to say that Concord is where he wants to be.

While driving down Union Street during a visit in the summer of 2007, his wife, Rose, asked if he’d like to move back, and he immediately said yes.

The couple sold their Portland condo in four days and moved to downtown Concord. “It was time to come home,” Eury says.

A 1975 graduate of Concord High School, Eury never thought he’d be back after college. He worked as an editor at DC Comics and later Dark Horse Comics. In the meantime, he published 10 books, including his recent homage to Concord. Now, he edits a magazine called Back Issue, an international publication that focuses on the history of comics.

Four years ago, he saw that the Historic Cabarrus Association was looking for an executive director. “I wasn’t looking for a job,” Eury says. “I was looking for something to do in my community.” He took the job and led the organization for four years.

On Wednesdays at lunch you’ll find him at The Concord Hotel attending a meeting of The Concord Rotary Club, which celebrates its 90th anniversary this year. He and his wife try to take a walk down Union Street every day, and he’s always on the lookout for artifacts for the museum. A recent trip to an antiques store rendered an outer casing for a wall-mounted telephone with the Concord Telephone Company’s original logo.

And so does packing up the contents of that museum, moving them across the street from the old store, and setting up the museum anew inside an old courthouse that also houses an art gallery and a theater. Because this is Concord, a place for sharing.

5 things not to miss in Concord

Lori K. Tate is a freelance writer who lives in Cornelius with her husband, John; their 2-year-old twins, Graydon and Margot; and their tabby cat, Azalea. Find more of her archived stories here.