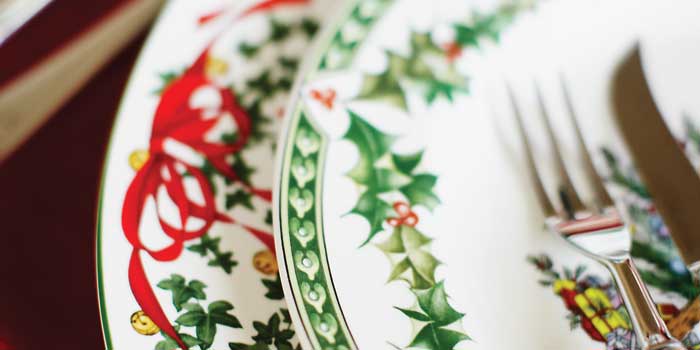 In the immaculate living room of her Charlotte home, traditionally appointed with two wing-back chairs and a sofa, Dynva Edens turns down the classical music so we can chat. She’s quick to point out two barrister bookcases and a corner hutch filled with fine china. “It’s a sickness,” the 65-year-old says, “but it’s a fun one.”

With at least 16 place settings in 30 patterns, Edens (her first name is pronounced “Denver” with a serious Southern accent) is an unofficial connoisseur of formal dinnerware. To her, dishes, teacups, and soup tureens are more than serving pieces. They’re elegant relics from a different time — when tablecloths were pressed, silver polished, old-fashioneds consumed. A time when entertaining was more of an art form, with no one thinking it was any trouble.

Her philosophy is simple: Why have it if you’re not going to use it? An admitted non-cook, Edens has a set of Asian-inspired plates she uses for Chinese take-out from nearby Shun Lee Palace. And she’s happy to let friends borrow her china if someone else provides the food. Need 80 place settings for a wedding reception? Edens can help. Halloween plates for October’s supper club? Asparagus plates for a bridal luncheon? She’s got all of that, too.

Looking at her china patterns reminds her of good times with family and friends. Through her fine china collection, she’s been able to share something beautiful with the folks she cares about most. And there’s no better time to do that than at Christmas.

Let her entertain you

On the third Thursday of December, Edens’s home buzzes with good food and even better conversation revolving around the goings-on of children and grandchildren, who’s getting married, and who’s having a baby. It’s the annual Christmas dinner of the Easy Readers Book Club, a group of 12 women who have forged a sisterhood through literature for the past 36 years. For 28 of those years, Edens has played host to the dinner.

Although the festivities begin at 6 p.m., when poinsettias (champagne and cranberry juice) are poured into crystal flutes, Edens’s preparation has been long in progress. With the help of her college roommate, Sallie Cobb, she creates a themed table setting that goes over the top in a good way. After about five hours of fluffing (decorating), the table is ready for a seven-course dinner, as each member brings a course.

“It’s been quite a tradition. I have not done the same thing every year,” says Edens, a former French teacher. “Matter of fact, I’ve tried really hard to do something a little different every year.”

The Christmas after the September 11 terrorist attacks, she did a red, white, and blue theme with small American flags and a picture of the twin towers. The year of her parents’ 50th wedding anniversary, she used their wedding china. The year she went to Ireland, she used her Belleek china in the Shamrock pattern with her Waterford crystal. However, the pattern she uses most often is Spode Christmas Tree.

Designed in 1938 by Englishman Harold Holdway, the center of the plate has a decorated Christmas tree with packages beneath its branches and a sprig of mistletoe on the upper right. Because Holdway had never seen a Christmas tree trimmed in American fashion, he topped the tree with a smiling Santa instead of the traditional angel or star.

After Thanksgiving, Edens practices her own holiday tradition. She carefully removes her Villeroy & Boch Manoir china (her current everyday pattern) from her kitchen cupboard and replaces it with Spode Christmas Tree. She proceeds to use it every day until at least Epiphany, January 6. If she eats a bagel, she eats it on a piece of Christmas Tree china. If she uses it for her book-club dinner, she’ll put a different twist on it, so it always looks different.

For instance, she might use a red tablecloth to accent Santa’s bright ensemble. Perhaps she’ll pepper the table with her collection of ceramic Santas. She might order a floral casket spray as a centerpiece, knowing its low height promotes dinner conversation. Whatever she chooses to do, the evening is a success, and everyone has a great time — which is always Edens’s objective when entertaining.

Edens has six godsons and a niece and nephew she’s greatly involved with, but she has no children of her own. That’s one of the reasons she’s had the discretionary income to support her collecting, she says. Moreover, she has more china because she’s thrown parties for almost all of those children she’s close with and has marked several sets for their inheritance.

She thinks about all of these things when she makes a purchase, which is time-consuming enough. For 22 years, she traveled around the country as a national world-languages consultant for the Glencoe Division of McGraw-Hill publishers. The traveling made it easier for her to look for china.

Now that she’s retired, she shops daily on eBay, visits flea markets and antiques shops whenever she gets the chance, and has her own personal shopper at Replacements, Ltd., in Greensboro. “I’m almost always working on a layaway at Replacements,” she says with a grin.

However, her love of fine china began long before she entered adulthood, long before she registered for wedding china. Growing up in Sumter, South Carolina, Edens and her younger sister, Farise, helped their parents throw grand dinner parties. Dynva remembers wearing her first cocktail dress in seventh grade for one such affair. “I had to get all dressed up to serve at the table,” she says. “We were the ones pouring the coffee and the tea.”

The thought of using anything but china for these soirees was blasphemous. Silver and crystal were always there. Seeing the lovely formality of these parties, as well as the guests enjoying themselves, made an impression on Edens and forever sealed her love of fine china.

She also enjoys knowing the stories behind these beautiful things. She knows more about her mother’s wedding china than most people know about their first cousins. Her mother, Iris Hill Edens, married in 1945 near the end of World War II, so she had very little choice when it came to her wedding china. Edens says her mother didn’t get the silver, china, or crystal that she thought she would because it wasn’t available.

Years later, her mother purchased a second set of her wedding china when a friend of hers married a widower. The man’s previous wife had chosen the same pattern and had 12 place settings of it as well.

Edens’s mother’s wedding china was made in Austria for an American company named Warwick, and it’s not marked on the back. Her mother always refers to it as Moss Rose. When the frequency of dinner parties began to increase at the Edens household, Iris deemed her china too girly for such events and started buying Lenox Brookdale. “We grew up with that being used a lot,” Edens says.

Today, 87-year-old Iris has 14 place settings of nine patterns, plus her wedding china. When Dynva goes to her mother’s for her family’s Christmas celebration, they use Lenox Winter Greetings every day and Villeroy & Boch Holly for Christmas dinner. Her mother’s home can seat 40 without unfolding a card table — all the more reason to buy more fine china.

Edens’ romance with Spode Christmas Tree took her by surprise. Her sister gave her a bread and butter plate in the pattern for Christmas in the late 1970s, and the next Christmas her mother gave her 12 dinner plates. Taking these gifts as a sign that she should collect this pattern, Edens began buying pieces on her own.

Although she keeps a spreadsheet of her collection, she’s not exactly sure how many Spode Christmas Tree pieces are in her possession. She thinks it’s about 700. “The really fun thing about it is that it’s been manufactured for so long there are so many pieces,” Edens says with the excitement of a little boy collecting baseball cards. “I don’t have them all, but that’s my goal.”

Like her mother, Edens also has Villeroy & Boch Holly (another Christmas pattern) in her collection. She began buying it for her mother. Then she bought it for herself and for her niece and nephew.

Storing all of her pieces is another matter. Although she keeps some of her china collection in her home, most of it — Valentine’s Day dishes, Easter dishes, Fourth of July dishes and more – resides in a climate-controlled storage facility. Regardless of how vast her collection grows, Edens still manages to use it at one time or another, making memories as she goes.

As she thumbs through a photo album of past dinner parties with a variety of themes, she admits that she doesn’t need all of this china. She keeps saying she’ll get rid of some of her “stuff,” but in her heart she knows that’s not going to happen. The china is her passion. It is her love. And one day it will be her legacy.

“I’m such an acquisitive soul that the more pieces there are,” she says, “the better I like it.”

Growing up in Rockingham County, Bob Page enjoyed Easter egg hunts. That might explain why he created a business that revolves around searching for beautiful things.

Page, 66, is the chairman, founder, and CEO of Replacements, Ltd., a company that carries a wide selection of old and new china, crystal, silver, and collectibles in its nearly 500,000-square-foot headquarters near Greensboro. At last count, Replacements had almost 14 million pieces in stock from more than 342,000 patterns.

Page started the business more than 30 years ago in the attic of his Greensboro home. Tired of working as an auditor for the state, he lived for the weekends when he could search flea markets. He soon started selling pieces on consignment.

“It was just unbelievable, the amount of response that I got,” Page says. “There were so many people looking for some of these old patterns.”

Eventually, he quit his job and started selling his treasures full-time. “Truthfully, I thought I’d probably never make as much money as I would working as a CPA,” he says. “I thought, ‘I don’t care.’ To me, it’s more important to enjoy what I’m doing than make a lot of money.”

He says he never envisioned the business prospering as it has. Replacements employs more than 450 people, and more than 70,000 people visited its retail store last year.

The top seller at Replacements — Spode Christmas Tree china, with more than 110,000 customers on file for that pattern. “For some reason, Christmas china is popular just in general, and this pattern has been around since 1938,” says Page. “It just looks like Christmas. People love it.”

Lori K. Tate is a freelance writer who lives in Cornelius with her husband, John; their 20-month-old twins, Graydon and Margot; and their tabby cat, Azalea. Lori’s most recent story for Our State was “Lake Lure” (August 2011).