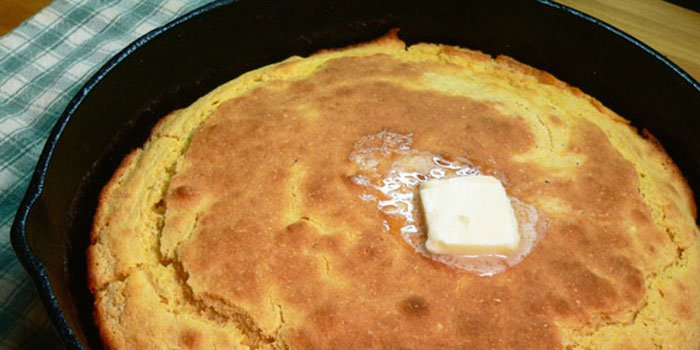 I was given this recipe just a few weeks ago by some new friends I met recently up in the mountains.

While talking with the lady of the house, I asked if she had a favorite recipe from her childhood that she might be willing to share with me. I could see her eyes light up as a big smile spread across her face. Without hesitation, she said, “Cornbread and eggs.” I told her I’d never heard of this combination and asked for some details.

“As a child,” she said, “My Mamaw Vines would make me cornbread and eggs for breakfast. I loved it, and now I make it for my family.”

I didn’t ask, but I suspect this was one of those recipes developed out of necessity, during poorer times, to help stretch the breakfast meal a little further for the family. It’s also a great way to use up any leftover cornbread.

A few days later, she sent the recipe she uses to make her cornbread. The next morning, I jumped right in the kitchen and baked up the cornbread, let it cool, and then made the Cornbread and Eggs. I wasn’t sure if I did it right, so I emailed her a picture of my finished dish just to be sure. Since she gave me permission to use the recipe, I wanted to be sure I did it right. A quick response confirmed my attempt: “That’s just the way it’s supposed to look.”

It’s a unique dish that turns out to be rather tasty. She stated that her husband enjoyed adding Tabasco (Editor’s note: We may opt for Winston-Salem-based Texas Pete.) to the finished product. Having now tried it, I can see where that might be a good addition, and I can also see where adding sausage, bell peppers, onions, or maybe some gravy would probably be pretty good as well.

I’ve had several requests asking for cornbread, so I’m happy to share this version with you. A word of warning though: It does contain a bit of sugar.

I’ve found one thing that really stirs up a Southern cook is whether or not cornbread should be made using sugar. I’ll be waiting to hear what you think about it. But first, give it a try.

What you’ll need to make the cornbread

What you’ll need to make the Cornbread and Eggs 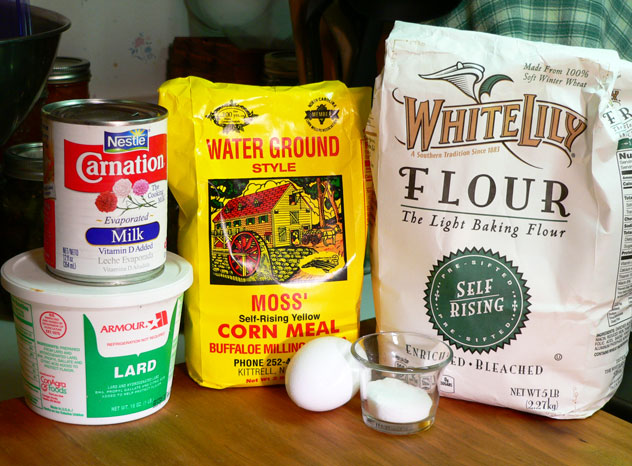 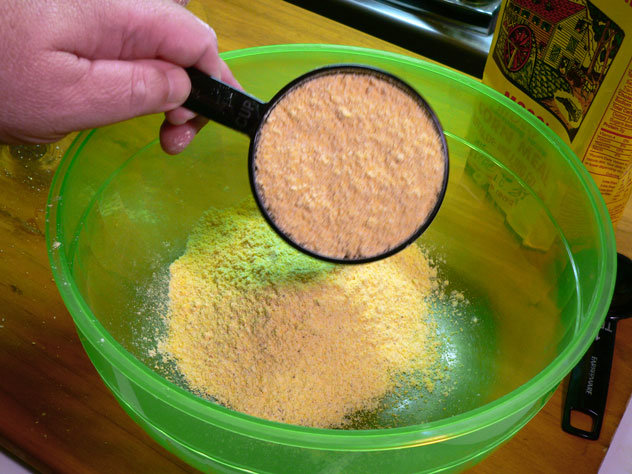 Place the corn meal in a medium sized mixing bowl. You’ll also want to go ahead and preheat your oven to 425º. 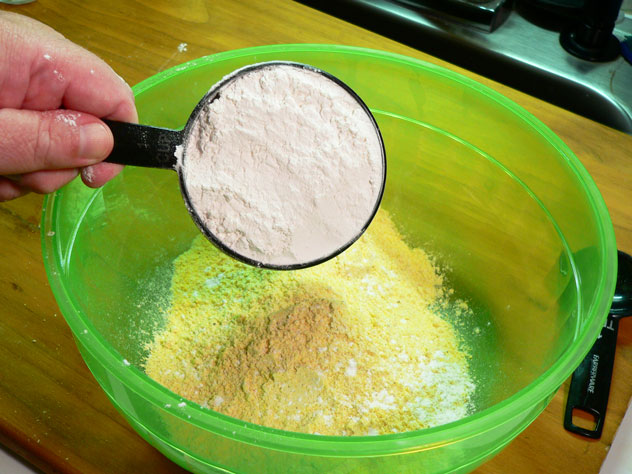 Add the flour. Sifting it is optional. 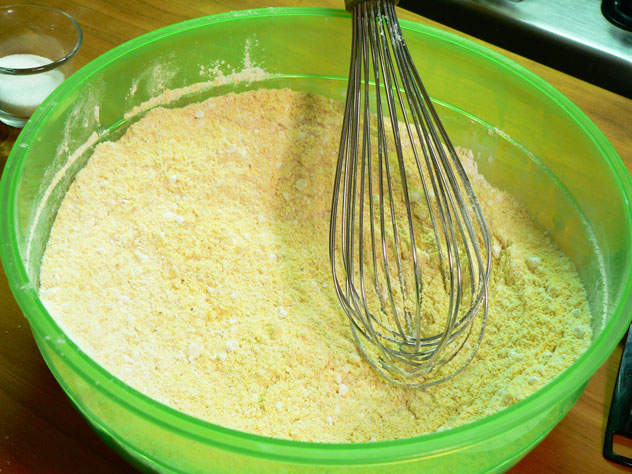 Whisk it all together. 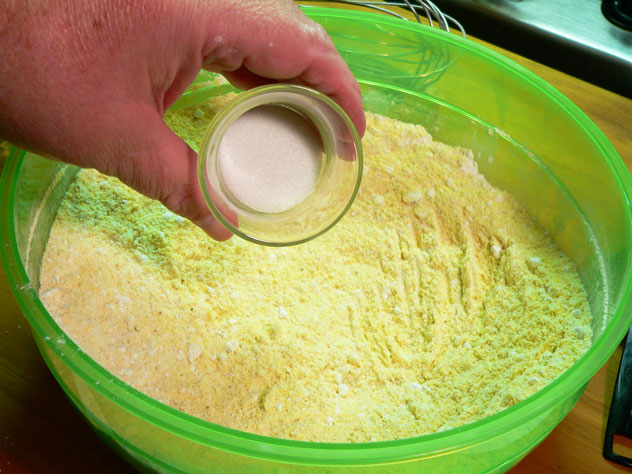 Oops … Let’s not forget the sugar. I know this will go against the grain of many folks, but personally, I like adding some sugar to the cornbread I make here at home. 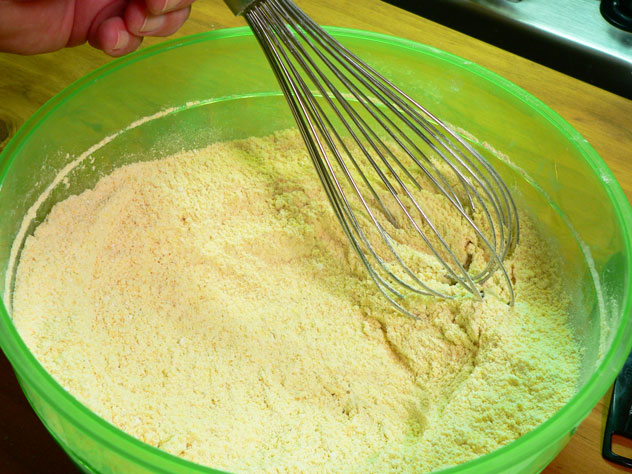 Now, whisk it all together really well. 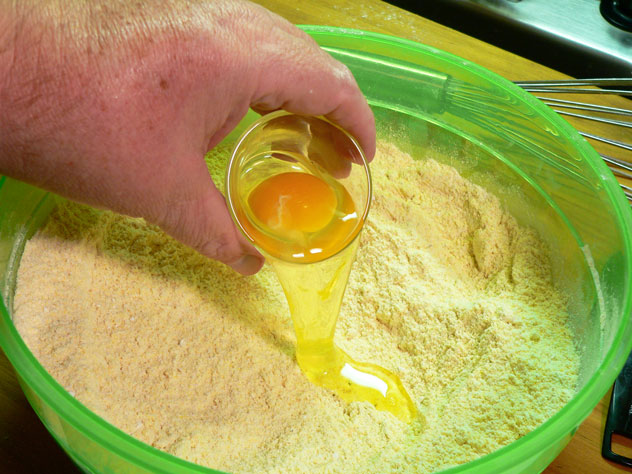 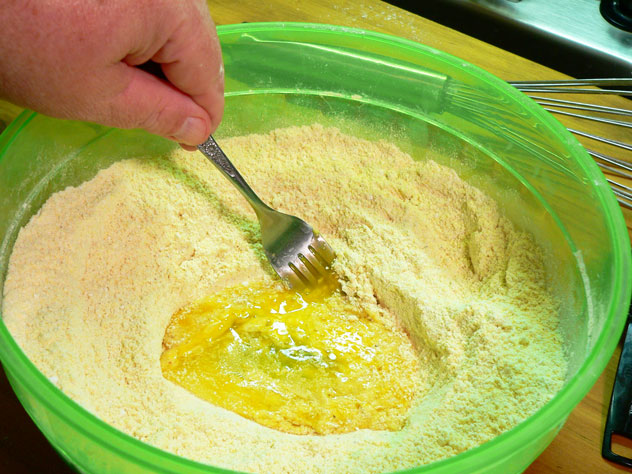 Grab a fork and break up the egg by giving it a good stir. 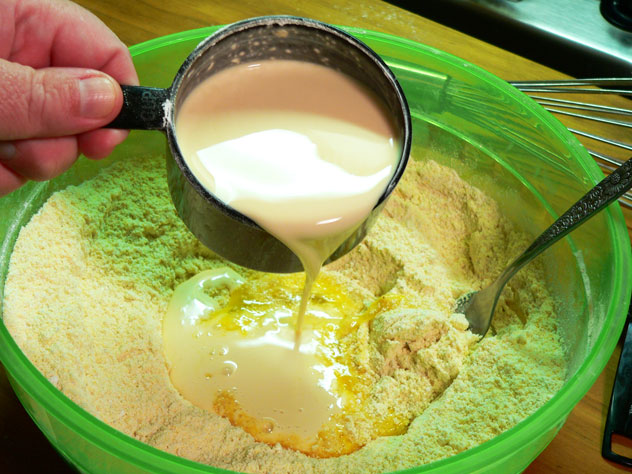 Add the milk. The actual amount needed will vary. I used a little over 1¼ cups of milk. You’ll need to stir it as you’re pouring the milk in, but try not to overwork it. Add just enough milk to make a batter similar to the consistency of a cake batter. 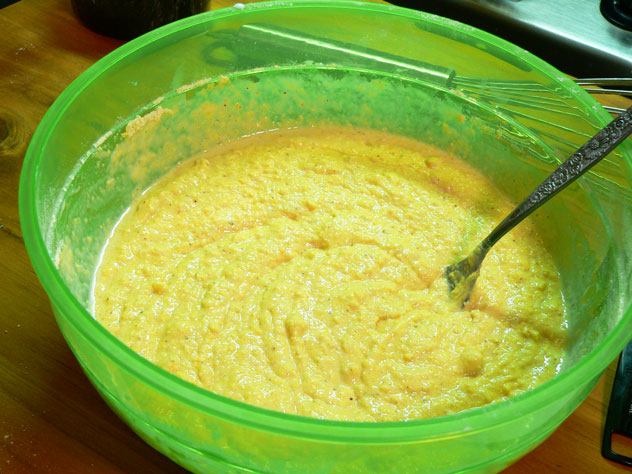 Don’t worry about having a few lumps, they’ll bake out. Again, you will want this to be about the consistency of a cake batter. 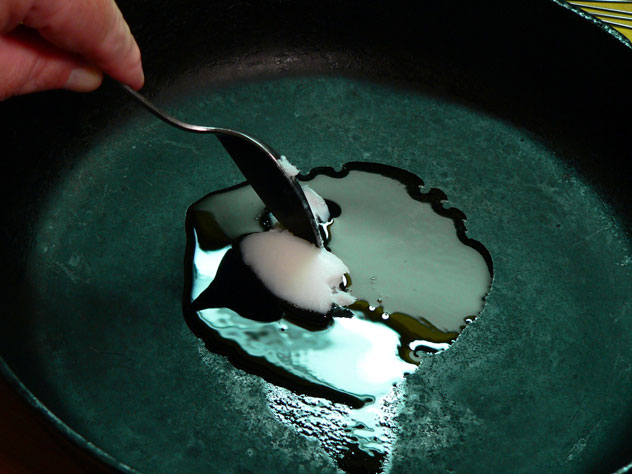 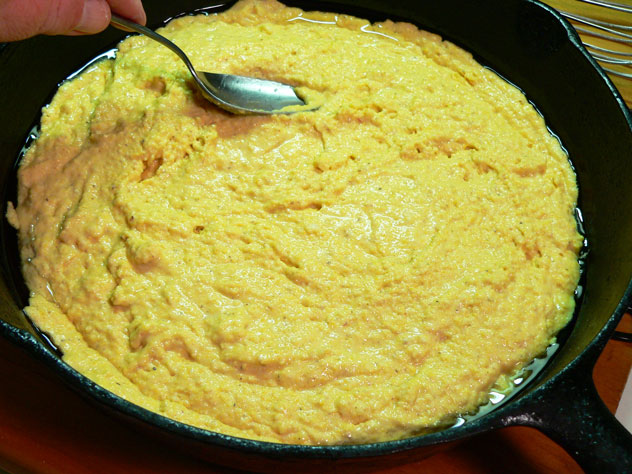 Pour the batter into the skillet. If it’s a little thick, you might need to spread it out with a spoon. 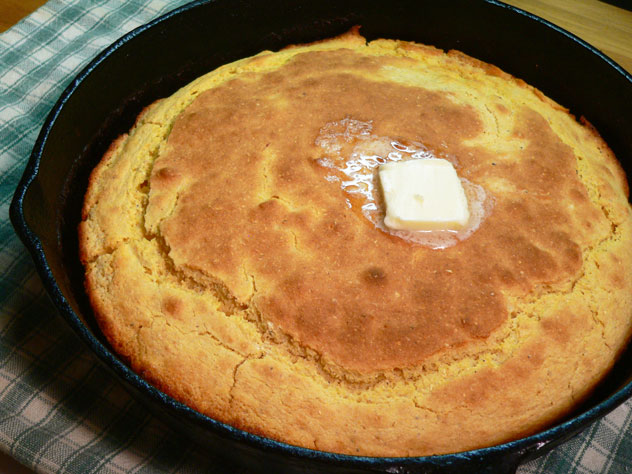 Test the cornbread to be sure it’s done by sticking a toothpick in the center of the bread. If the toothpick pulls out clean, it’s done. If it pulls out with a few crumbs attached, you’ll need to bake it a little longer. The cornbread should also pull away from the edges of the pan a bit when it’s fully baked.
Place the skillet on a wire rack, or folded towel, and let the cornbread cool for a few minutes before serving. Spreading some butter across the top adds another layer of flavor. 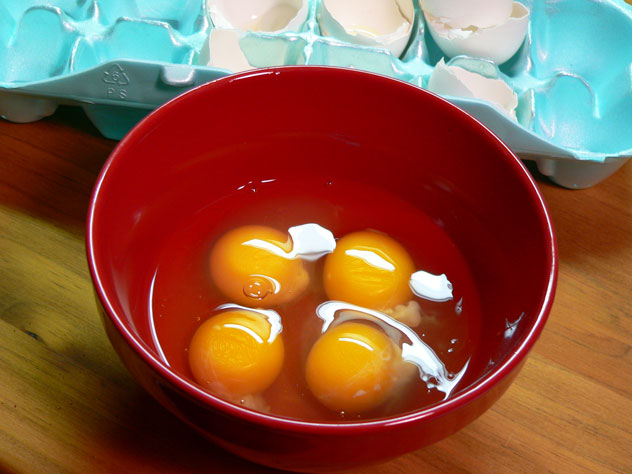 To make the cornbread and eggs: Break about four eggs into a small bowl. 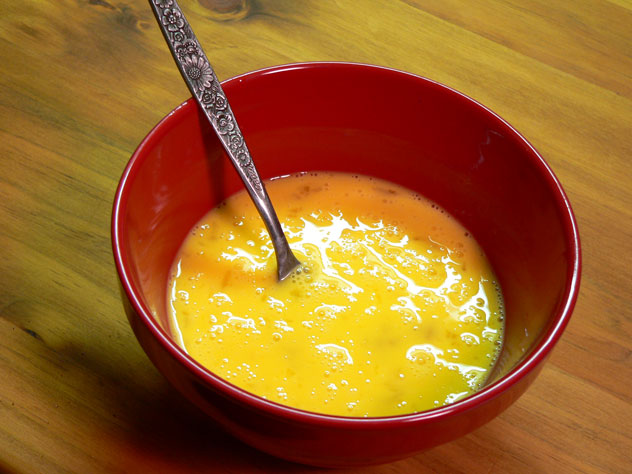 Whisk the eggs together well with a wire whisk or fork. Add a dash of water or milk if desired. 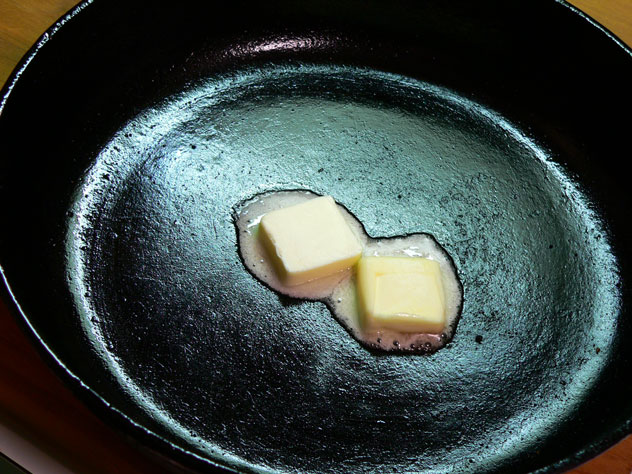 Place the skillet over medium heat on your stove top. Once the pan has started to warm up, add a couple of pats of butter and let it melt. 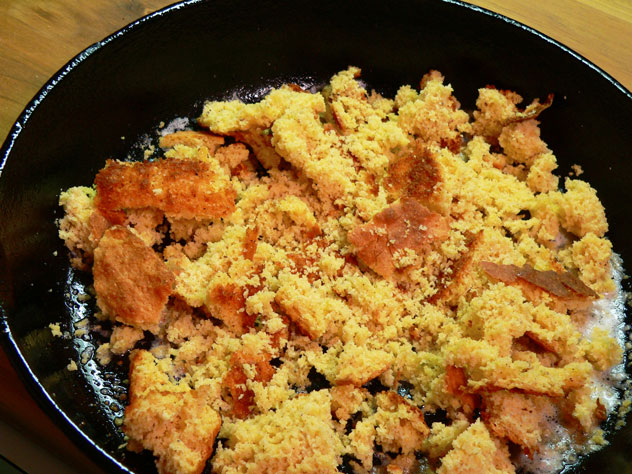 Crumble up a section of the cornbread and add it into the butter. It will only take a piece about as big as a slice of pie to make a good sized serving. Stir the cornbread around in the butter and let it warm up and brown just a little more. 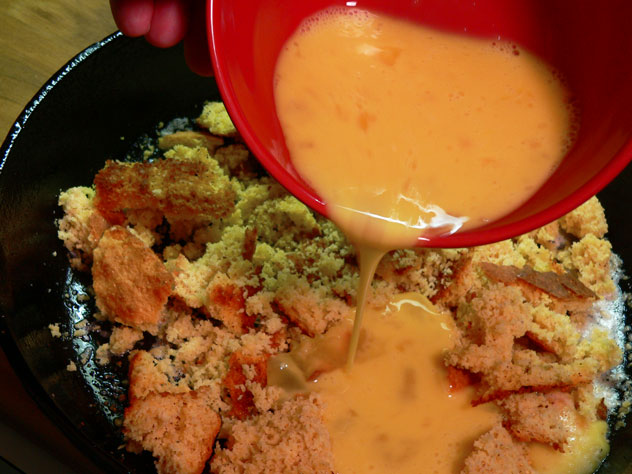 Pour the whipped eggs into the skillet, spreading it out all around the pan. 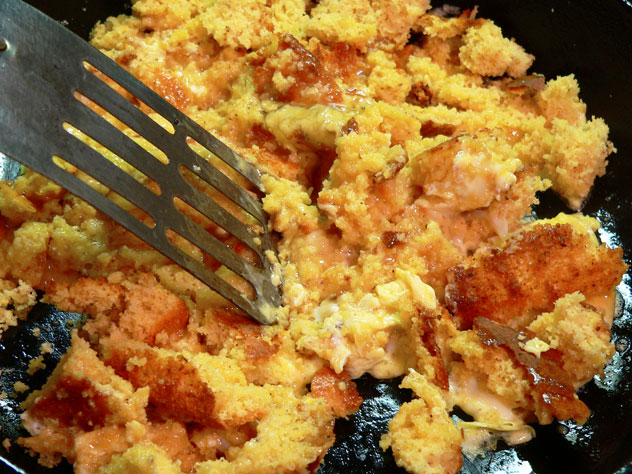 Stir the eggs around, mixing it with the cornbread as the eggs cook. The cornbread will absorb the eggs, so you’re basically scrambling it all together until the eggs have had a couple of minutes to cook. 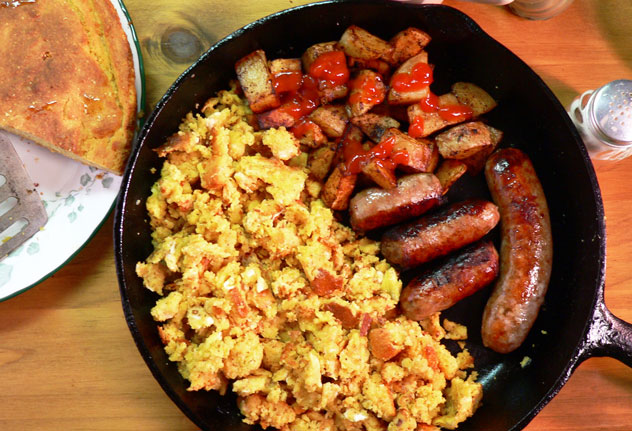 Serve it up while it’s still warm and enjoy!

Have you ever heard of cornbread and eggs? Ever tried it, or think you might want to? I’ll look forward to hearing your comments in the section below. Let me know what you think of the recipe, and let me know if your Southern cornbread contains sugar or not. This should prove interesting.