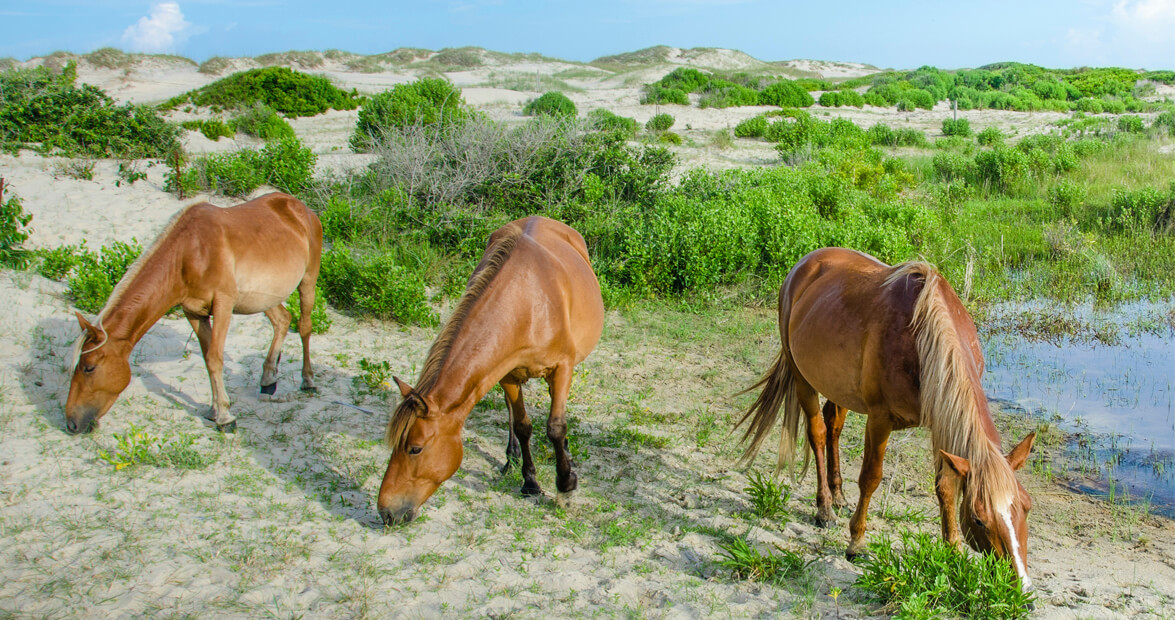 As the clouds and sea roiled, we were on our knees, digging for our lives. Well, maybe that’s a tad dramatic, but it felt like it at the time. Thunder mockingly cackled at us as the lightning danced and big, sloppy raindrops pelted against our backs. It was the wickedest summer storm I’d ever witnessed, and it also happened to be my family’s first visit to Corolla.

We were on a quest to see the area’s famed wild horses, and our otherwise trusty Jeep had gotten stuck in the sand. After a half-hour of digging, sans shovel, and narrowly escaping electrocution, a tow truck appeared without us ever having called for one. It was a miracle — or perhaps economic opportunism at work. (Along this drivable stretch of beach, you can make a killing rescuing forlorn cars.) Caked with sand and defeat, we were a laughable sight to the better-rigged SUVs that drove past. But the spectacle we had created was worth it, since we got to witness another in exchange: one of only two remaining wild herds of Colonial Spanish Mustangs left in the world, freely roaming the beach, unfazed, backs turned toward the wind.

Even in the roughest of weather, these horses have a fortitude about them that’s lost among man and eight-cylinder machines. It’s what Karen McCalpin, executive director of the Corolla Wild Horse Fund and a self-proclaimed “lifelong horsewoman,” appreciates most about these animals.

“There is a hardiness this breed has developed over the last five centuries in order to not just survive here, but thrive here,” McCalpin says.

A lot of people call them “banker ponies,” but doing so understates their majestic features. With their shiny, brown coats and long tails, the horses of Corolla appear newly groomed despite having never been touched by a human hand. Their legs are muscular beyond belief, made strong by summiting the dunes and traversing anywhere between 16 and 20 miles each day.

Edmund Ruffin, who is said to have fired the first shot in the Civil War, visited Corolla in 1856. He penned that these horses live “so roughly that any others from abroad seldom live a year on such food and other such great exposure.” Bygone years have made these mustangs resilient since they arrived to the Outer Banks in the 1500s.

Most every North Carolinian knows that the horses got here as a result of colonization, but some of the specifics are still in question. Records from Spanish ships have shown that when these vessels ran aground on the sandbars that dot the Outer Banks, horses and heavy items were thrown overboard to lighten the load and get moving again. Being the excellent swimmers that they are, some of the horses were able to make it to shore. When colonies in the area failed, horses were also left behind. And while romantics hold onto the notion that some of these animals escaped shipwrecks — proof that beauty can rise from debris — there aren’t any known documents to support such a theory. 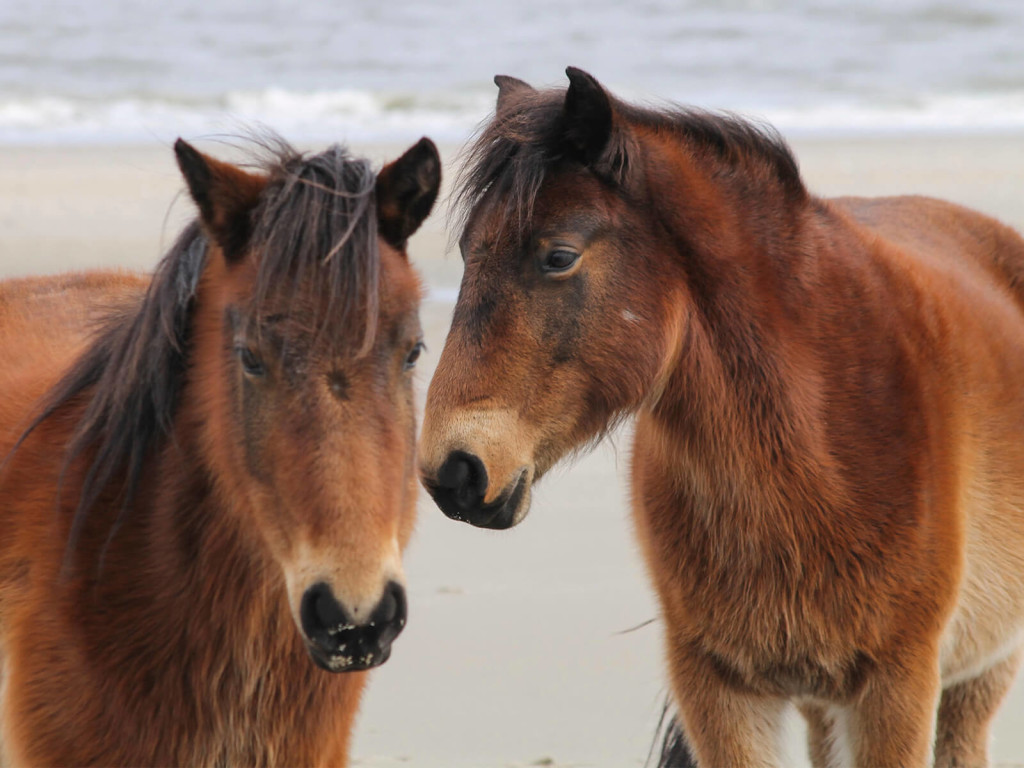 No matter what Corolla’s original banker horses weathered, their descendants have endured various challenges of their own over the centuries. In the 1800s, horses were captured in events known as “horse pennings.” When put to work on mainland farms, many died as a result of starvation, averse to the grains they were fed, which were so unlike the marsh grasses they were used to.

Prior to the 1930s, wild herds roamed where they pleased. But as part of President Franklin D. Roosevelt’s New Deal, the Works Progress Administration employed hundreds of men to construct vegetated dunes along the Outer Banks as concern about our state’s eroding beaches grew. A strict stock law was created and a bounty was placed on the horses in an effort to preserve the dunes.

“If you wanted to capture one and sell it, you could. If you wanted it for yourself, you could just take it,” McCalpin says. “In 1938, if you shot one, you got $25, which back then was pretty good money.”

In 1926, National Geographic ran an article that estimated that there were as many as 6,000 horses on the Outer Banks. Today, only 100 remain in Corolla, and there are 107 that live on Shackleford Banks. Ocracoke’s horses come from a long line of Colonial Spanish Mustangs, but they no longer roam freely. A smaller group of domesticated horses were taken to the Rachel Carson Reserve in the 1940s and became feral over time.

The Shackleford Banks horses at Cape Lookout National Seashore have been federally protected since 1998. McCalpin is trying to instill similar protection efforts in Corolla by championing legislation that would require the herd size be kept at 110 to 130 horses and would introduce several Shackleford horses to the area. Doing so would increase the herd’s genetic diversity and ensure its stay on this stretch the Outer Banks in the coming years, she says.

“If these horses are going to be here for generations to come, for our grandchildren and their grandchildren to enjoy, they have to be protected,” McCalpin says.

To McCalpin, it isn’t just about keeping these creatures around to look at; it’s about preserving a part of North Carolina’s heritage. After all, she notes, the Colonial Spanish Mustang is the official state horse.

“Whether you’re from the mountains or the coast, these horses represent the way North Carolinians have evolved, and that is to take the environment you’re in and thrive in it,” McCalpin says.

See the horses for yourself:

If you don’t have four-wheel drive, there are a variety of safari-style tours that will take you to see the horses. The Corolla Wild Horse Fund offers its own tours, and proceeds go toward herd management, education, and the rescue and rehabilitation of injured horses.

Admire from a distance. Remember that it is illegal and dangerous to feed or get within 50 feet of the wild horses.