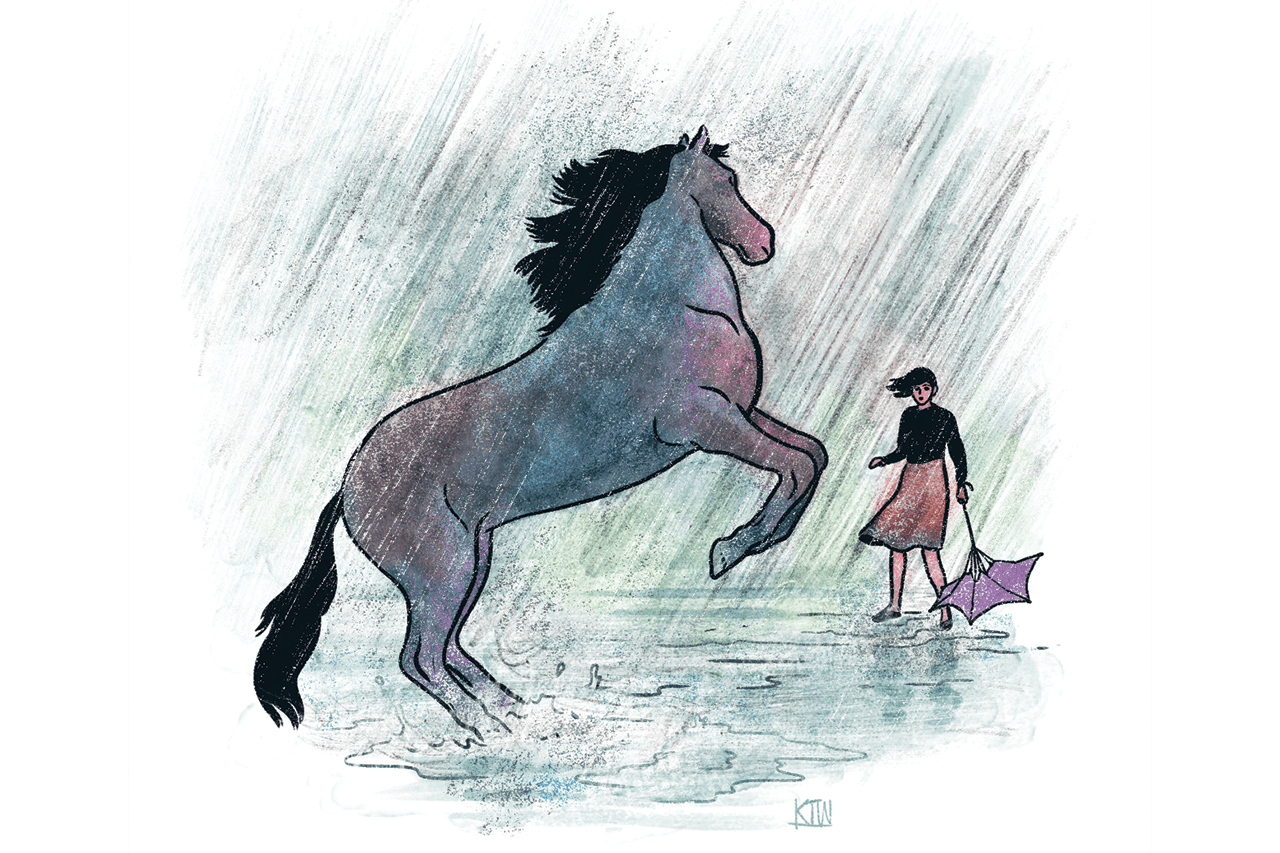 There are no amenities on Shackleford Banks, where I went to see the horses. That’s how I wanted it; I was eager for wild. This slim barrier island, part of Cape Lookout National Seashore, delivered, for it is as untamed as the 100-plus horses that live there. From its windswept shore I could still see the foggy townscapes of Morehead City and Beaufort, and the nearby Cape Lookout lighthouse, but otherwise, I’d left the world behind. Nine miles long, less than a mile wide, the island is mostly flat, although small dunes and thick shrubs and live oaks growing along the northern sound side provide patches of shelter. The horses survive entirely on marsh grass and sea oats. They find freshwater ponds or dig holes in the sand and wait for them to fill. Descendants of horses abandoned by Spaniards and other colonists as early as the 1500s, they are a rugged and resilient breed, kin to other Outer Banks herds found near Corolla, Ocracoke, and in the Rachel Carson Reserve. The Colonial Spanish Mustang also has been the official state horse since 2010.

What is it about a “wild” horse that stirs the imagination?  In elementary school, a group of us girls dashed up and down the playground at recess, snorting, whinnying, pawing the earth like the glorious, self-determining horses depicted in the films and books of our day: The Black Stallion, Misty of Chincoteague. We exulted in the glamor of wild. We flipped our hair like manes; we imagined tails pluming behind us as we ran.

Today, some 37,000 wild horses still roam the western United States, living resourceful, hardscrabble lives. In our bravest, riskiest moments, we humans feel kindred. If — bound for degrees of domestication — we bridle at the idea of being corralled and locked up, it’s easy to assume that wild mammals share that feeling. There is a reason that people who train and domesticate horses refer to “breaking” them.

When I was 6 years old, already horse-crazy, I could not wait to ride a pony at the fair. Mother and I stood in line for a ticket and watched the placid Shetlands trudging in the sawdust, their coats dull and shaggy, their backs heaped with saddles. Their unshod, overgrown hooves curved like little elf shoes. When the attendant lifted me into the saddle, as little as I was, I felt like a big bully. ’Round and ’round in a ring we went, and not around anything rosy, but a metal pole to which the ponies were chained. I sensed forlornness in their plodding. The incendiary, mane-tossing, nostril-flaring freedom I had long imagined that contact with a live mount might impart was missing. I felt even sadder when I saw other kids kicking the ponies in their birdcage ribs to make them go faster.

On the ferry to Shackleford, I took a camera, a notebook, and an umbrella. Rain looked imminent. To the west, the sky glowed bright, but in the east it brewed like a poisonous, pre-tornado sky. The ferry plowed forth, through moderately choppy water, but the wind admonished us, spitting sea spray like thumbtacks. Beside me sat our seasoned tour guide, a Beaufort resident and botanist, and a park ranger who, in full regalia, looked like she’d know what to do if we shipwrecked. They were lamenting the recent death of a mare. What might become of her foal?

As we disembarked, the clouds exploded with rain. I opened my umbrella, and the wind flipped it inside out and nearly to smithereens. I was drenched. But because there was no thunderstorm, we hiked dauntlessly toward a distant group of horses silhouetted against the fuming sky. My camera and notebook, stowed in a plastic bag, would remain there for the duration. This was immersive wild.

As we arrived at the herd, and our guide began talking about the horses, spectacular lightning whipped and sizzled down from the sky. Our location, flat as a drum skin, percussed with thunder. “Drop your umbrella!” somebody yelled at me. “You’re a lightning rod!”

The ferry had returned, bleating its horn.

A mix of terror and exhilaration seized me. This was really living — if I survived. Down the beach we stampeded, splashed, sometimes wading through water, our hides soaked in brine, up to our fetlocks in danger. I felt myself turning into a horse, right then and there, except for that silly, wind-mangled umbrella I’d held on to, no matter what, because I wanted to leave Shackleford Banks as pristine as I’d found it.

But you can’t be a wild horse with an umbrella.

Safely aboard the ferry, I glimpsed the faraway herd, majestic in their vulnerability, calmly grazing as the elements crashed around them.