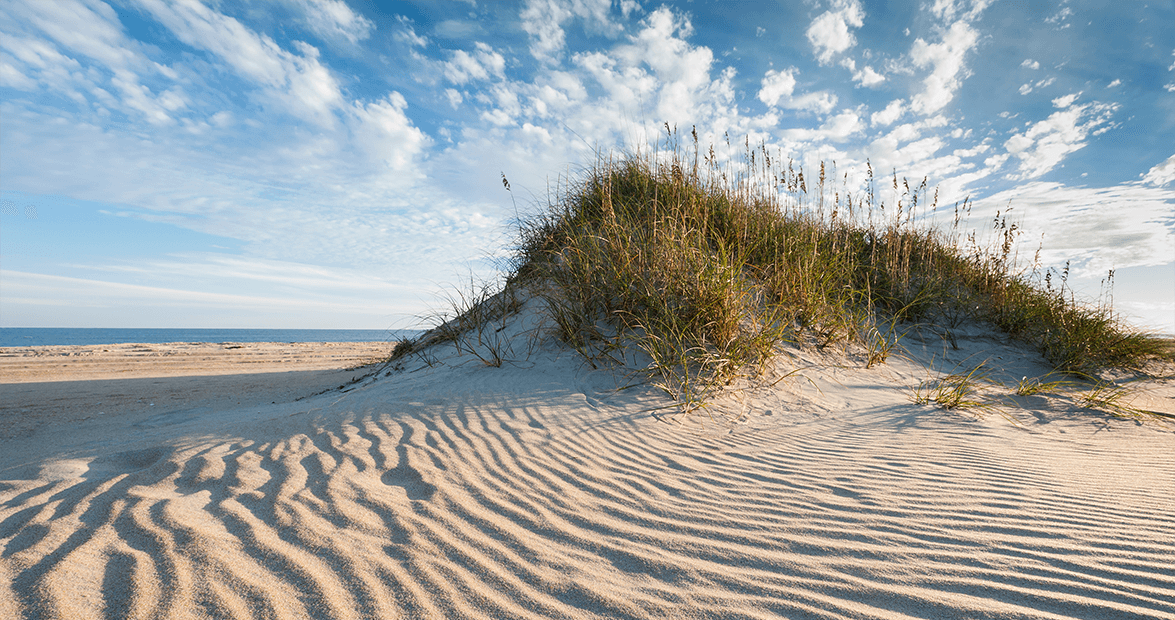 In the 16th century, when explorer Giovanni da Verrazzano anchored on what was likely Hatteras Island, he believed the narrow barrier islands were the only land separating the Atlantic from the Pacific. The forested Outer Banks were lovely, but vulnerable; for centuries, the 200-mile island chain had weathered storm tides and hurricanes, acting as a shock absorber for the mainland.

Until recently, inhabitants of the islands never realized that the land underneath them was slowly moving west. The pummeling water and wind propelled sands across the island like waves, sealing off inlets. Over time, the ocean side eroded as the sound side grew. The sands created dunes that rolled over each other like a bulldozer’s tread.

As early as 1850, visitors noticed old cemeteries and “ghost forests” uncovered by the shifting sands. Elsewhere, the sands entombed more trees and structures. By the turn of the 20th century, the eroding beaches had become common knowledge. In 1908, a member of the U.S. Forest Service warned, “If prompt measures … are not taken, the destruction of the forest is certain. The lands will become a sand waste.”

Further alarm set in two decades later, when a series of bridges and roads attracted investors, who bought up land and built hotels and restaurants. As hurricanes continued to ravage the coast, the investors grew concerned. The situation set the stage for major changes.

On Hatteras Island, residents began lobbying for highway access despite the challenges. A newspaper article proposed a national park along the coastline, buffering a timber region. The proposal gained widespread support.

In order to protect the future development, however, the Outer Bankers needed an erosion-control protective system. They needed dunes.

Around that time, President Franklin D. Roosevelt announced his New Deal. The Federal Emergency Relief Administration was created to provide government money to put Americans to work. The Works Progress Administration (WPA) took over North Carolina’s sand-fixation project, with help from the National Park Service. The plan called for a line of man-made, vegetated dunes stabilized with fences. 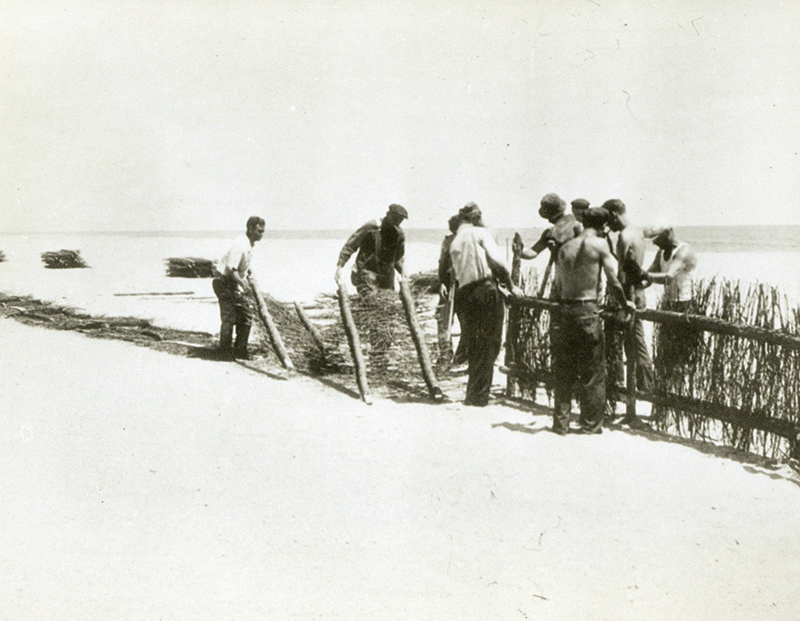 Fifteen hundred WPA and Civilian Conservation Corps (CCC) workers were employed to build the fences. The “CCC boys,” unmarried young men and teenagers, were housed in military-style camps on Cape Hatteras and Roanoke Island. They were given uniforms, and were led by military officers who drove Army trucks on the beach. Working seven days a week, with Sunday afternoons off, the young men built fences with timber and brush, and installed them along the contour of the shoreline. The fences stopped the blowing sands, allowing dunes to form and grow. The workers then planted grasses — beach grass, sea oats, cordgrass, and wire grass — along with shrubs and tree seedlings to fortify the dunes, which ranged from 10 to 25 feet in height.

“You’d plant grass every six inches,” measuring with your handprints, recalled former CCC worker Alfred Langston, whose oral account of his camp on Cape Hatteras is housed at the Outer Banks History Center in Manteo. Born in Kinston, Langston had never seen the ocean before signing up for the project at his local post office at age 15. His main job was to ride a horse and steer wild horses away from just-planted grass. Other times, he and the 600-man team built up the dunes above the fences with shovels, and planted grass.

“Some guys dug this way; the other guys would throw [the sand] the rest of the way,” Langston said. “We didn’t have no cranes or nothin’. Dug here, thrown here, pick it up, like steps, until it got to the top. And when it got to the top, they smoothed it off and hope it would rain — which it never did. It stayed there two or three days, and we let the sun heat it and dry it out … and that’s when we’d go plant grass onto it.” 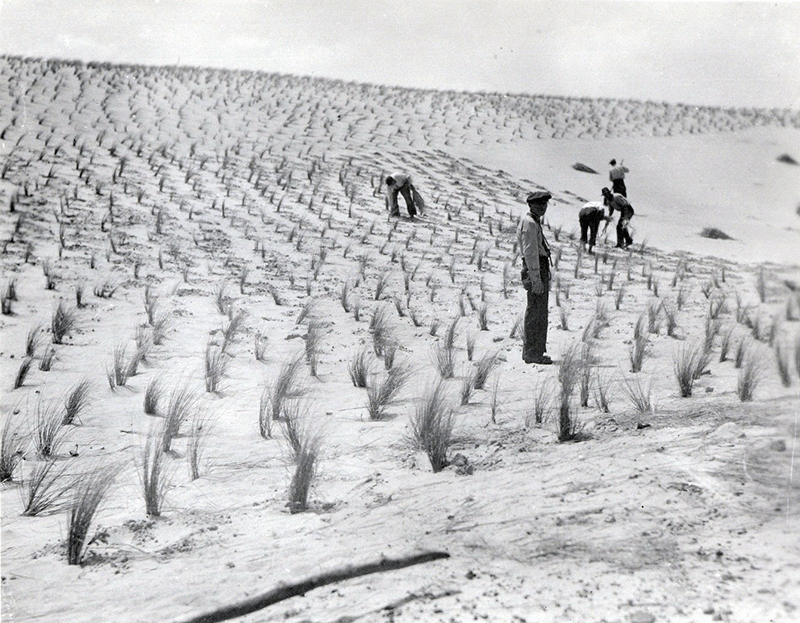 A miracle and a question mark

On Hatteras Island, Danny Couch, a local tour guide and real estate agent, stands atop a dune, gazing over glistening sand to the gentle waves beyond.

Come high tide, those waves will be pounding the wooden beams on which motels and homes precariously sit. Thanks to global warming and, ironically, those man-made dunes, geologists forewarn that our Outer Banks could one day be swallowed by the Atlantic.

For Outer Bankers, the science could shatter a way of life based on tourism. “These dunes created the economy,” Couch says. “The bad part is that they tampered with Mother Nature’s engineering. These beaches were never meant to be static. This is the most dynamic geological process on the planet. It can, and it does, change overnight.” The eroding situation seems to have been exacerbated by the well-intended dune project. After World War II, as storms continued to pound the islands, Outer Bankers renewed their interest in coastal development. Dunes were fortified, or bulldozed and rebuilt.

Meanwhile, tourism increased. The Herbert C. Bonner Bridge was completed in 1963, connecting Hatteras to the mainland. Houses, shops, and restaurants were built, providing work for local carpenters, waiters, and Realtors.

But the worry had already set in. Scientists discovered that, despite the dunes, erosion and flooding had continued, and the ocean tide had inched closer to properties. Apparently, the dunes served a reverse purpose by blocking sound waters from rushing back to the ocean. Dune construction was officially halted. 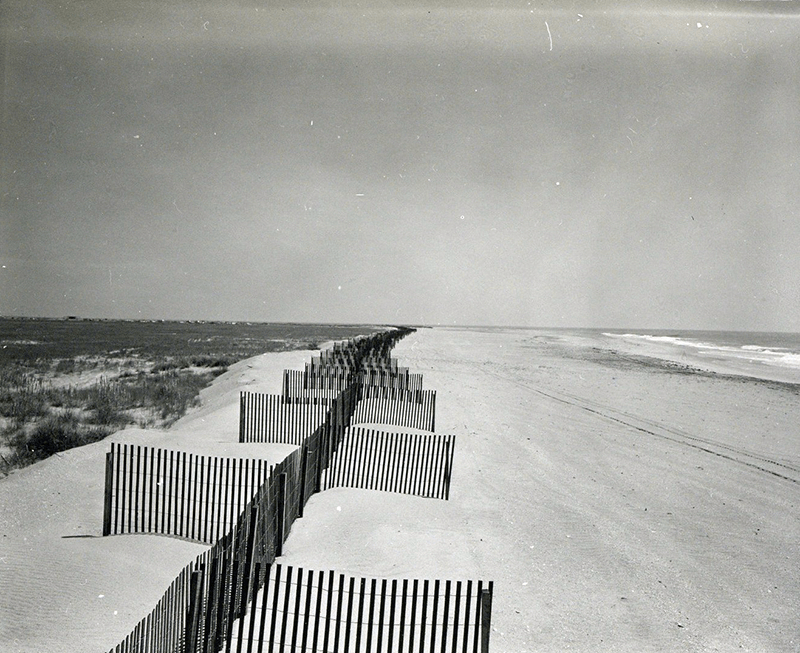 In the past 40 years, storms have steadily eaten away at the dunes, and portions of the islands are collapsing. Between Avon and Buxton, the beach has reportedly receded to about 25 percent of its original width. In some places, you can see clear across the island. Outer Bankers now wrestle with whether the dunes should have ever been built. But Couch, a ninth-generation North Carolinian, swears that the WPA/CCC project was an economic miracle.

“Without the dunes, there’d be no oceanfront,” he says. “If not for tourism, I’d have been a fisherman. But now I take a vacation every year and my kids will go to college.” Still, he acknowledges that Outer Bankers might be living on borrowed time. “Were the dunes a mistake?” he asks. “I doubt it. But that will be left up to future generations.”