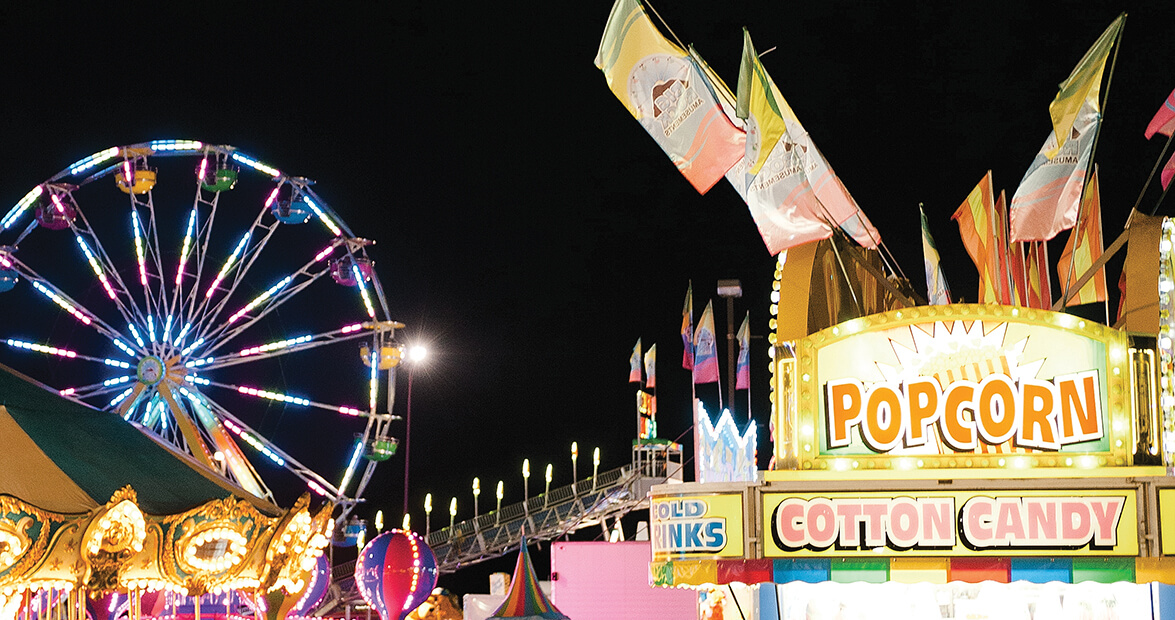 To borrow a well-worn phrase, I learned everything I need to know about life at the fair. The county fair, that is.

On the childhood roster of Best Annual Events, it ranked only below Christmas and birthdays. The fair was such a big deal in Rutherfordton that school closed at noon so we could go. Now, that’s big.

You saw it from afar, the Ferris wheel dominating the horizon, and thought you’d faint from excitement. Below it lay uncountable pleasures and treasures: the Tilt-a-Whirl and the Gravitron, whose bottom dropped sickeningly from beneath your feet. Cotton candy from a circular metal pan, materializing into spun-sugar pastel clouds, and candy apples whose thick, syrupy scent overwhelmed the smells of sawdust and sweat. Who wanted a hot dog from the Jaycee tent? I could get hot dogs at home. Though I did admire the five-gallon containers of mustard and ketchup.

The Fair. It needed no adjective. Not The State Fair — I didn’t know there was such a thing. Not The County Fair, either. Just … The Fair.

I was the type of child that needed a sure thing. I couldn’t throw a baseball at a bowling pin, or land a hoop over the neck of a bottle, or hit a paper target with a BB gun. But I could pick up a duck. On the bottom of each bobbing duck, floating along in a wavy, waist-high creek that in itself was marvelous, was a number that corresponded to a prize. A stuffed bear, a plastic mug, a balloon on a stick, all of which dangled tantalizingly from the perimeter of the stall. Guaranteed, the sign said. Perfect.

While my mother and sister were at another booth, I paid my money and agonized over my color choice, and from the constant flow, I carefully picked up a duck. The barker took it from my hand, looked at the number, and shook his head. For that number, he said, no prize. I stood rooted in the sawdust. Disbelieving. But hadn’t the sign said —

“What did you win, Susan?” a voice behind me boomed. I swiveled. The question was posed by my parents’ friend Mr. Tanner — a county commissioner and our neighbor. He was asking me, but he was looking straight at the barker. “Did you get lucky?” he asked, and again, “What did you win?”

The operator swallowed and licked his lips. Then he took a pole with a hook and reached high above the false creek to a smooth-skinned dog with a pen attached to its collar — far and away the choicest prize — and handed it to me.

“It’s for your friends’ signatures,” Mr. Tanner explained. “Get it? An ‘autograph hound.’ How ’bout them apples?”

Years later, at that same fair, when I was spending my allowance on a silvery metal disc with my name etched on it — in pieces by week’s end — I realized what had happened at the fair. Walking on the sawdust, along with barkers and vendors and ride operators, amid farmers and Jaycees and classmates, there were also champions of justice. Heroes.

Today, just 38 fairs run in the state’s 100 counties. In Rutherford or Cumberland or Halifax counties, you can pat a pig at the petting zoo or watch them race three times a day. Applaud a circus high-wire act or ride The Zipper. Indulge in cheesesteaks and funnel cakes and deep-fried Oreos. But I still turn for the midway, with high hopes, in search of that part of the fair that once taught me about life. To be a champion for someone or something smaller, weaker, and less assured in the ways of the world.

And there they are. The sure thing. Between the merry-go-round and the funhouse mirrors are the bobbing ducks, still floating along. Everyone wins.