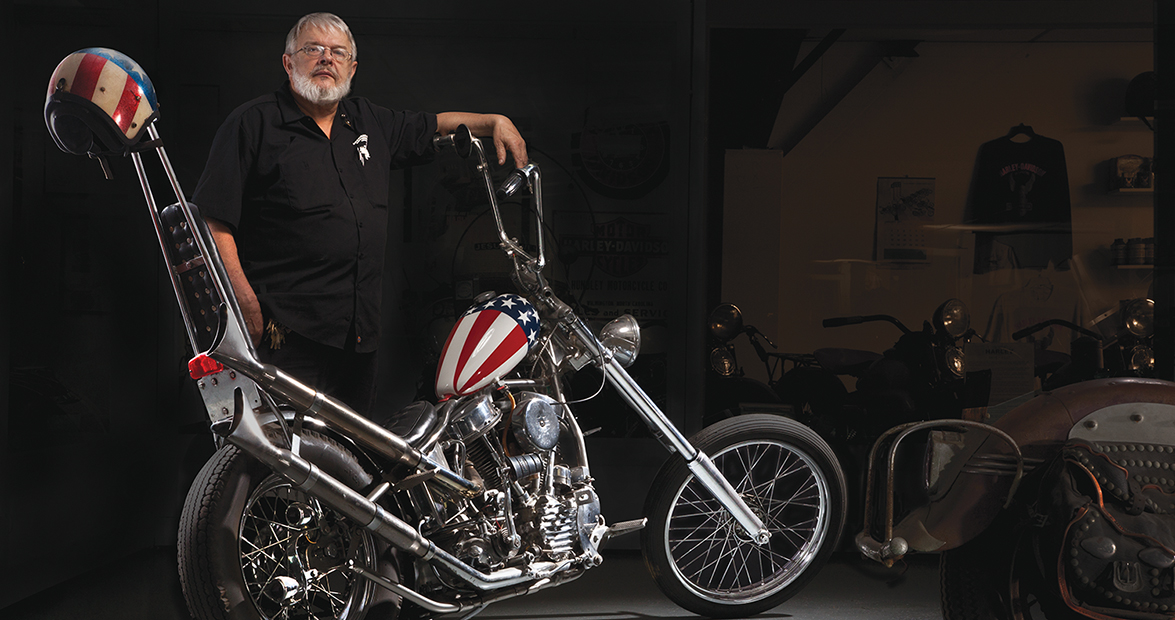 Before I met Jan Cox, the Harley was, to me, one unnerving night in ’92. I had just moved to New York City from a small college town in North Carolina. My third night, decked out in my poet-wannabe beret and lost down in Alphabet City, I wandered into a gauntlet: a row of hogs to the left and at my right a biker horde, uniformed in leather, chains, and tats. This was the city’s Hells Angels clubhouse. No matinee outlaws here, no Easy Rider’s Fonda or Brando of The Wild One, but real men with eyes cold and dangerous. A greenhorn like me probably wasn’t worth even a sneer from these calloused lifers in the badass trade, but I got panicky. I adjusted my round-rimmed glasses, looked down, scurried to the next block toward the gentrified and artsy West Village — more my speed.

But thanks to Jan and her story of the 100-mile ride, I’ve since expanded my view of bikerdom. (I’ve also given up the beret and concluded, to my vexation, that I’m a not-that-good poet.) Jan owns and operates, along with her sons, Robbie and Stephen, Cox’s Harley-Davidson. Her father-in-law, Recil Cox, established this Asheboro-based business in 1961, and it now stands as the oldest continuously owned Harley dealer in North Carolina. When she and Stephen agreed to talk to me about the old-school cool of Harleys, I imagined that we’d spend our hour evoking lonely renegades, growling engines, and open roads. What I actually heard were narratives about the pleasures of a long-running family business and the congeniality of the Harley community. I also got a love story.

The boy she’d earlier dated rode a Honda. He was rebel enough to earn the frowns of her father, but not half as bad (or as hunky) as the new guy on the Harley. His name was Gary, but he went by Poochie. He was Recil’s son, and he rode a ’70 Harley Sprint, trim and quick.

It’s 1972. Poochie roars up to Jan’s porch smack in the middle of a June sundown. His exhaust fuses with the cooling air’s clover. Jan climbs on, he revs it high, and gravel explodes all over the lawn: Off they fire into summer.

“I felt such freedom on that [Harley],” Jan remembers. “We’d go out riding with no destination in mind. We’d get to a stop sign, and he’d ask, ‘Left or right?’ And I’d choose, and then we’d reach the next sign and do it all over again. One night we rode 100 miles without ever leaving Randolph County.”

This woman knows Harleys as well as anyone in the world, having successfully marketed and sold them for decades, and what speaks to her most about these machines is not the inimitable sound of their motors, nor their associations with bad boys and hepcats, nor the Harley’s connections with America’s own eagle. The bike is a memorial to the time she was most alive, when she was romanced by the man who later became her husband, and who died in 2010, at age 56. 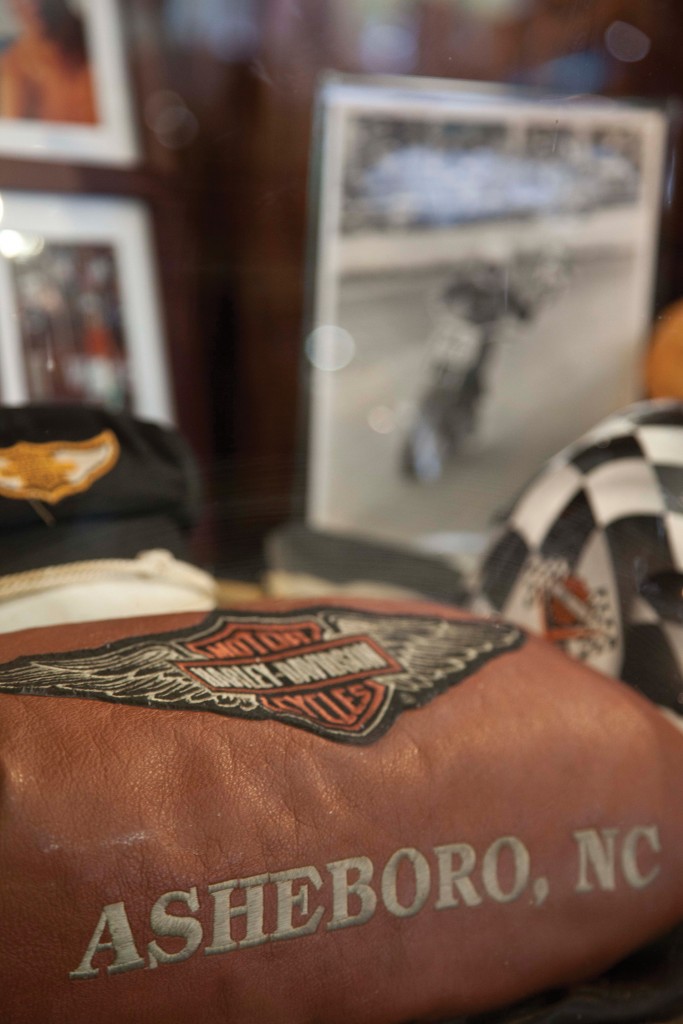 Anything can trigger a memory. For Marcel Proust, it was a madeleine. He bit into the little cake and memories of his childhood sprang into his mind. For you it could be the smell of an old book (Remembrance of Things Past?) or that Springsteen song, “4th of July, Asbury Park (Sandy),” with its melancholy angels riding Harleys down from heaven.

But are some things more likely to stimulate strong recollections than others?

Ed Rich, who owns the American Classic Motorcycle Museum with Rick Allen in Asheboro, thinks so. As he guides me around his collection of vintage Harleys — including a rare, pristine ’36 “Knucklehead,” named after its engine shape; a ’42 WLA Liberator from World War II, complete with scabbard and replica submachine; and an exact duplicate of Fonda’s Easy Rider chopper — Ed explains that these machines are more than metal and oil. You climb “onto” another bike, but you enter “into” a Harley, into its history and lore.

Ed’s motorbikes, housed on the second floor of the American Classic Motorcycle Company (on the first is a diner and cycle repair shop), are really a cast of characters, each with its own story.

Here’s a ’47 chopper owned by a prison guard who recently died. The guard had painted the leather seat white (“No one does that!” exclaims Ed), to go with his Carolina blue saddlebags. A bugle horn, also white, rests below the gas tank, which is beginning to rust. It’s precisely this corrosion that gives the bike its “value” (Ed’s word), marking its unique being as a bearer, between home and prison, of this man and no other.

There’s another ’47 model, a black Knucklehead. A Western Union sign hangs from its front. Vernon Moore rode this bike during his 41-year career (1927 to 1968) as Asheboro’s telegram man. He delivered death certificates during World War II. Parents heard his motor coming, and braced.

Among these mementos are accessories from a couple who spent their best years riding: matching leather pilot helmets, as well as embroidered saddlebags and belts. And ask Ed to tell you about the Greensboro Motorcycle Club’s fashion contests of the ’20s, when dandies in their finest tooled down the runway. One visitor got teary with joy envisioning this lovely scene.

Ed has witnessed elation like this many times since he opened the museum in 1993. The 50 bikes he displays, models from ’36 to ’78, “bring people their lives back,” he says, and revive their “free-living time.”

Can’t an old car do the same? Maybe, but the Harley is especially enthralling. Children barely able to walk scream “mo-mo” upon beholding his bikes, rush toward them, climb all over them — unless Ed can stop them first. It’s as if a primal attraction exists between the bike and the psyche. 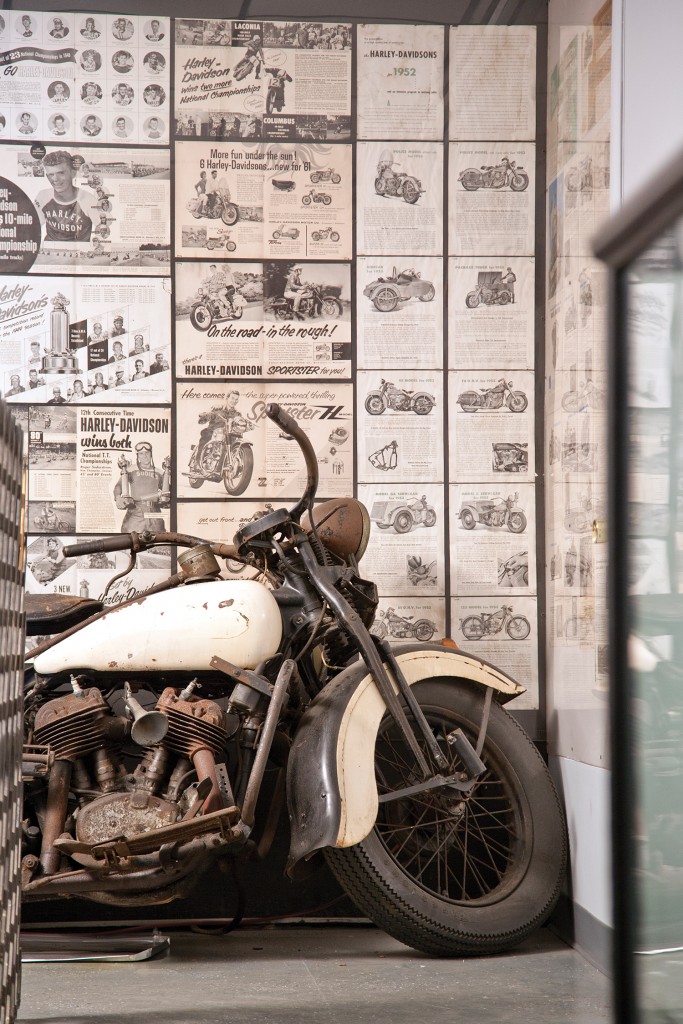 Does the Harley, a vehicle most resplendent and potent, activate our archetypal desire for rebirth, symbolized by the chariot of the forever-resurrecting sun god Helios? Or is the Harley’s force more cultural? Maybe we download into our toddlers the meanings that Harley has accrued: iconic freedom and strength and such. After all, the first American entering Germany after the armistice of World War I was supposedly riding a Harley. And Captain America himself motors on the same.

“This is all hard to explain,” Ed says, and he’s right. And he should know, not just because he’s been around vintage Harleys ever since he was discharged from the Army in ’71, but also because he’s an artist (his paintings are housed on the first floor) focused on those moments that so intensely seize the mind that their prints remain long after the gripping has gone.

But enough brooding over how things pass and why some remain — an agreeable meandering, but far off the straightaway, where the action is.

Better to let what is alive live, be.

Summer of ’72. Poochie and Jan hum over the roads of Randolph County, caring not a jot for past or future, but only the now. The now they love, when “why” falls away and romance soars.

I’ll trade my powder blue CR-V for a Harley Fat Boy. I’ll thunder up Interstate 95 and cruise over to the Hells Angels clubhouse. (Surely it’s still there.) No, I won’t make eye contact, and my pace will be quick. But I’ll roll right through the danger. Get reborn hard.