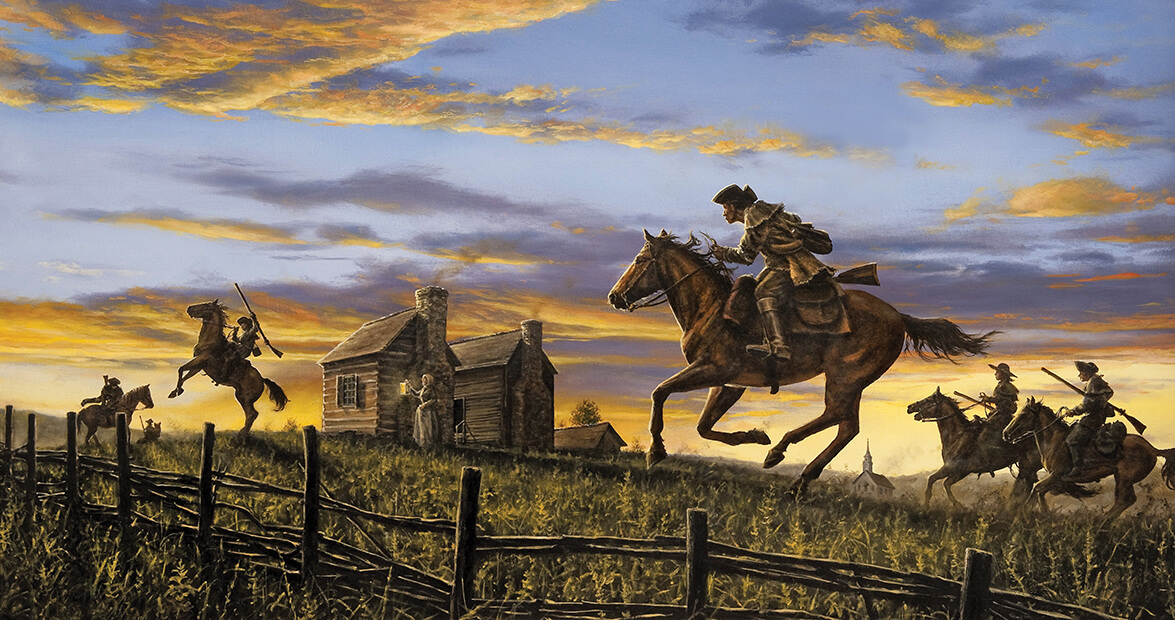 The British officer on horseback has perhaps a half-second to live. He’s on a dirt trail in an alien land. Shafts of sunlight target him like descending arrows. Out of the underbrush has leapt a ferocious man — mohawked, deerskin-clad, shrieking in midair, his tomahawk poised to split open the powdered wig beneath the officer’s tri-cornered hat. The horse, wide-eyed, whinnies in shock. The officer stares into the distance, a look of displeasure on his face, oblivious on the cusp of oblivion.

“This is all local, concentrated history, centered here,” Dan Nance tells me. He gestures like a symphony conductor toward this painting, Ambush!, which currently hangs at the Charlotte Museum of History. “Again, it’s cinematically-bent,” he says. “I love to capture that supreme moment, the ultimate moment, that last breath of that man, the perfect arch of that guy, the horse noticing it before the man.” Nance gets worked up about this stuff. He’s no reclusive tormented-artist type. In his early 40s, clad in cargo shorts, with a swoop of salt-and-pepper hair above a grinning, boyish face, he’s more like a proud dad showing off his son’s Pinewood Derby entry, which he helped build and enjoys a little too much.

“You’re witnessing this man’s last moment, and then it’s up to you — this is what I love, to engage the viewer. I’m not going to tell you the end of this,” Nance adds. “It’s up to you.”

I tell him I have a pretty good idea of how it ends. 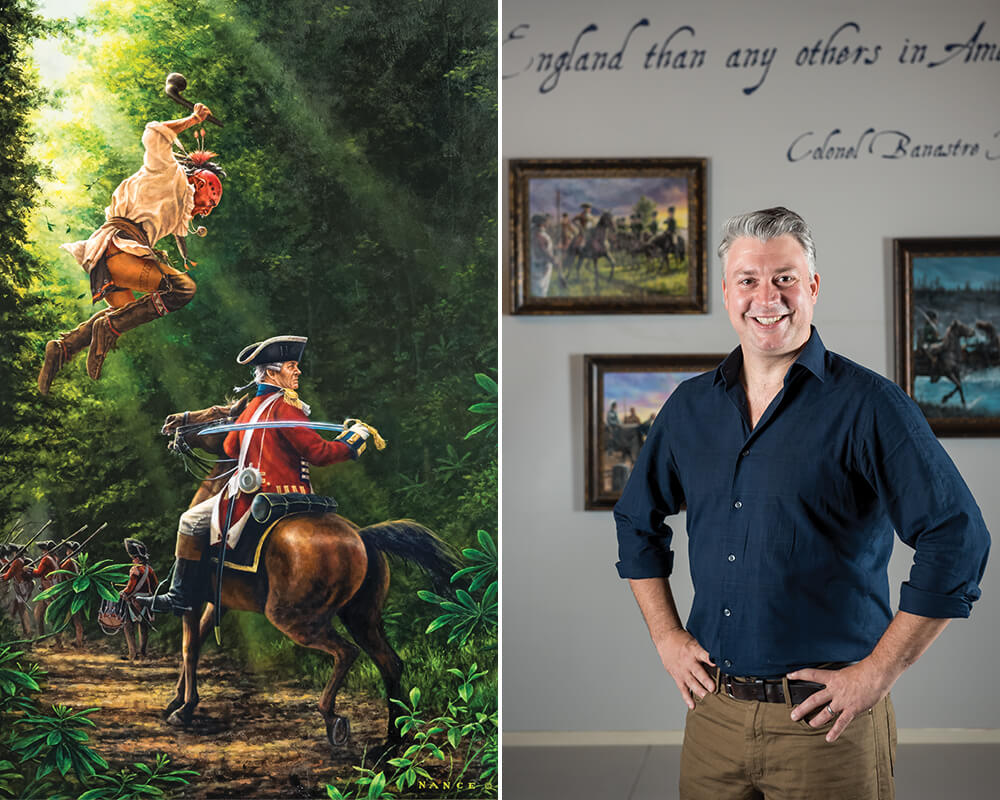 Nance’s Ambush! is made more vivid by the contrasting greens and reds. “I wanted color and light to play another character in it,” he says. photograph by Emily Chaplin and Chris Council

The path that Nance painted could very well resemble the same path that South Tryon Street follows today. Nance has lived in south Charlotte, near that former wagon road, for 20 years. He understands the gap between then and now, how to connect the two through his work, and how to help you connect them, too.

Nance was born in Raleigh, grew up in Columbia, South Carolina, and relocated to Charlotte with his parents at age 15. When he graduated from South Mecklenburg High School in 1992, he had an idea that he’d make films for a living. Nance admits he was a bit of a sci-fi enthusiast.

He might still. But after graduating from Pratt Institute’s School of Art in New York City with a film degree in 1996, he discovered that people, especially in the South, were willing to pay handsomely for his renderings of historical events from the colonial, American Revolution, and Civil War days. He began selling originals to private collectors and prints to others, and he’s managed to make his living solely through painting for 20 years. “Find some wood and knock on it,” he says. 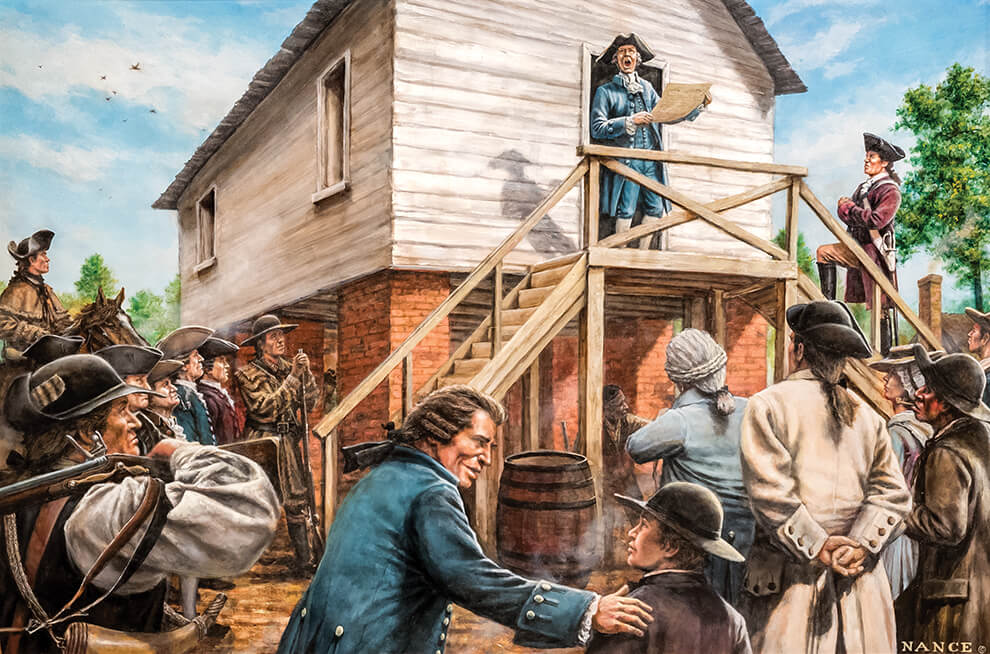 Nance’s Reading of the Meck Dec depicts Thomas Polk declaring independence from Britain on the steps of the Charlotte courthouse in 1775.

He understands the gap between then and now, how to connect the two through his work, and how to help you connect them, too.

“Charlotte’s Road to Revolution: Paintings by North Carolina Artist Dan Nance,” the Charlotte Museum of History’s exhibit of his historical paintings, was the first large-scale exhibition of his work. The museum’s president and CEO, Kay Peninger, met Nance more than a decade ago, when she worked in Richmond, Virginia, for a historical foundation dedicated to Patrick Henry and Saint John’s Church. Nance had accepted a commission from Patrick Henry College for a portrait of Henry. They reconnected in 2013 during a meeting of the May 20th Society, a Charlotte colonial history organization, when Peninger caught a glimpse of the Henry artist. “I said, ‘Hey, I know you!’ ” she says.

They started thinking about an exhibition devoted to Charlotte’s settlement in the years before and during the Revolution, and tied to the fabled Mecklenburg Declaration, or “Meck Dec.” That was the May 1775 proclamation in Charlotte that some historians believe was the first formal declaration of independence from Britain — and which predated the more famous July 4, 1776, document from Philadelphia. Peninger started contacting the collectors who’d bought Nance’s paintings — including real-estate magnate Cameron Harris, who owns Ambush!, and Charlotte Chamber President and CEO Bob Morgan — and eventually compiled 17.

The finished exhibit, complete with interpretive panel and 18th-century furniture, encircled a diorama of Charlotte circa 1775. “Humble” doesn’t quite capture the pre-Revolutionary scene. There’s a huddle of wooden structures and little else.

The museum is five miles from the Square at Trade and Tryon, the heart of modern Charlotte, a place that, 240 years later, is dominated by skyscrapers where bankers manage millions. The viewers get to fill in that space between what was and what is.

“I like the idea that I can take what I learn from the past and apply it to today to figure out how we might not make the same mistakes twice,” Nance says. “I want to hold up something that is rough but true, that is honest, so [viewers] can be inspired to go out and make their mark, to do something. This is your country. This is your backyard. What are you going to do with it?” 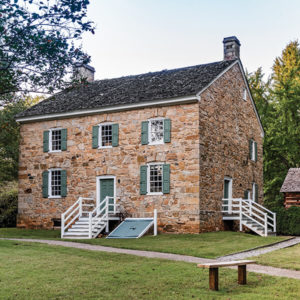 Hezekiah Alexander did a lot of things, but in short, he was one of the people who helped break off relations with the English, thereby sparking the Revolutionary War, and afterward, he helped draft the new North Carolina Constitution. He started off as a blacksmith, made his money in farming, and ended up as a magistrate in the new United States of America. His two-story house, built in 1774 with native Piedmont stone and oyster shell mortar, still stands in Charlotte, making it the oldest building in Mecklenburg County. The stone structure at the Charlotte Museum of History has been restored to its former glory, representing a simpler, yet consequential time in North Carolina’s history.
— Jeremy Markovich
Photograph by Jay Sinclair.