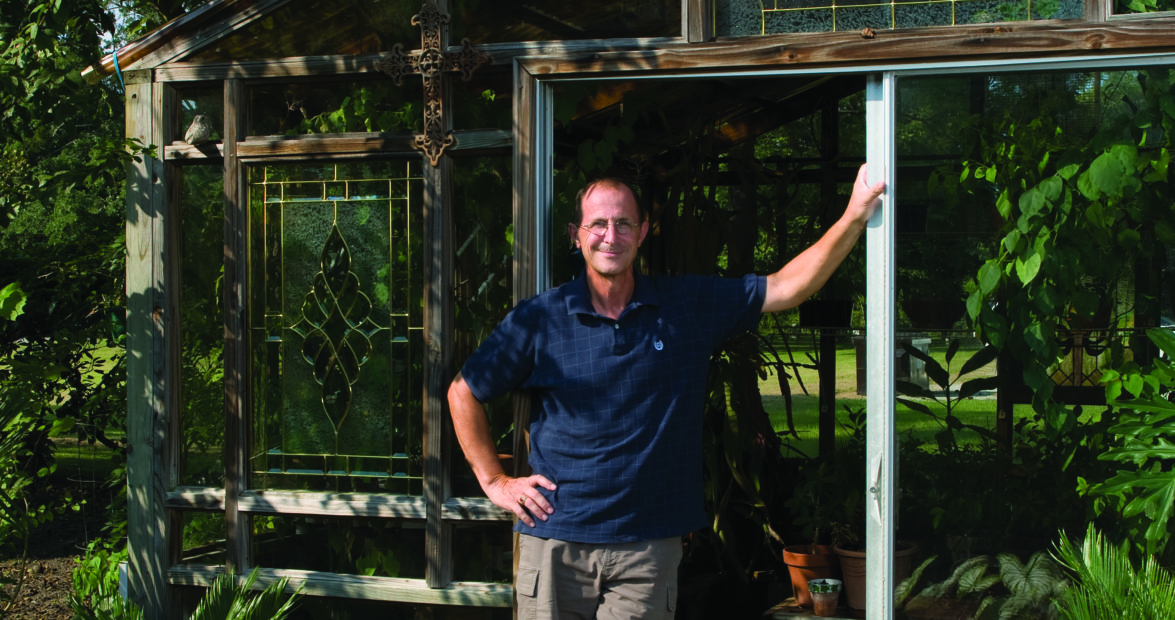 Rich Daniels likes to have a schedule. And I’ve thrown him off of his. I’ve dropped by his art studio in Pollocksville without notice, and he’s covered in sweat from trimming shrubs and mowing the lawn around his gallery and studios. I’m not the only interruption. A client has stopped by, too, wanting to talk about one of Daniels’s art pieces.

I ask him if he has time to talk about his work for a story. He tells me he doesn’t.

Once a Marine, they say, always a Marine.

Scheduling is a big part of being organized. And Daniels, who spent more than 30 years in the United States Marine Corps before retiring in 1999, is nothing if not organized.

Now, he makes art glass, paintings, and pottery in a century-old house in this small town just south of New Bern. It’s clear upon entering this place that he doesn’t fit the stereotype of an artist. His gallery is neatly arranged, orderly displayed, and gives off a sense of peaceful, almost mystical, serenity.

Eventually, he decides he’ll let me stick around, to hear his story about a Marine who became an artist.

Rising in the ranks

Daniels began his military career as an enlisted private in 1970. He took every opportunity that was offered to him and ended his career as a lieutenant colonel and assistant chief of staff at Cherry Point Marine Corps Air Station.

The background makes him unique in the art field, but he doesn’t think there’s anything different about the road he took. Daniels grew up around art. His mom encouraged him to read and to appreciate everything. He carried a camera and sketchbook with him everywhere.

“People are sometimes surprised to find someone with a military background creating stained-glass art,” he says. “Maybe they expect us to be breaking bones instead of glass. But it’s not really contradictory.”

In fact, his interest in art only grew after he enlisted in the Marine Corps and traveled all over the world. In places like Somalia, Saudi Arabia, Japan, Hawaii, and other bases in the United States, Rich found inspiration. “I liked to run each morning through the different towns or get a bike and see the people, see where and how they lived,” he says. “My military life didn’t discourage or diminish my interest in art. In fact, it enhanced it. When I retired, I realized I had the opportunity to expand what I had been doing all my life. Now I have more time to be creative.”

Daniels still is clearly driven. At any given time, he’ll have a couple of projects going at once: pottery in the kiln or glass melting while he is working at the potter’s wheel.

To keep up with it all, he wears a timer around his neck. “I need to stay busy. Time is a commodity.”

Beginning with his realistic depictions through photography and painting, Daniels expanded to a more abstract expression of his artistic abilities through creating stained glass and, more recently, pottery.

Daniels’s creativity expanded into his marketing as well. His major advertising effort involves “catered demonstration tours,” in which groups spend time not only seeing the artwork, but enjoying a meal as well. With the help of his wife, daughter, and granddaughter, Daniels serves guests a summer menu of mandarin chicken salad with pasta or a winter spread of chili and rice and homemade bread.

Daniels’s gallery in a nearly 100-year-old house “allows for a lot of freedom,” he says, and he tries to include that freedom in displaying his work.

He points out several pieces of pottery work displayed in the front of the gallery. “This is my Magnolia Collection,” he says. The theme of this collection is the quintessential Southern flower. “People from the North like it because it’s a part of the South they can take with them Southerners see it as a part of themselves.”

As I enter the stained-glass work area, the first thing I notice is a wide light table with a pattern spread out on it. This is where Daniels designs, develops, and assembles each piece
of work. He uses a computer to enlarge his original design, then he assembles everything on this table.

“Like a cook, I do each thing one step at a time, finally bringing everything together to match the vision in my mind,” he says.

Daniels has several pieces of stained glass placed around the studio, some completed, some still in the process of creation. The particular design he has on the table is linear, an amalgam of lines that forms a pattern of flat-sided figures, each space with a different color. The total piece forms an arc made to go over a doorway.

A purpose to everything

Daniels created several of the windows in the Church of St. Andrews Lutheran Church in New Bern, 12 altogether.

“Everything I create has a purpose,” he says. “I once made 39 original soup bowls and gave them to a church with the condition that they be filled with soup and taken to a soup kitchen.”

Daniels loves what he does and, evidently, so do many other people. He is a man immersed in his art but attentive to the practical aspects of the business.

And he mows the grass and trims the shrubs, too. Even in retirement, this Marine keeps going.

A few days after my visit, I decide to make a follow-up call, to try to go over some details. We talk for a bit, but not long. Another call comes in, and a customer walks through the studio door. Daniels has to go, if he’s going to stay on schedule.