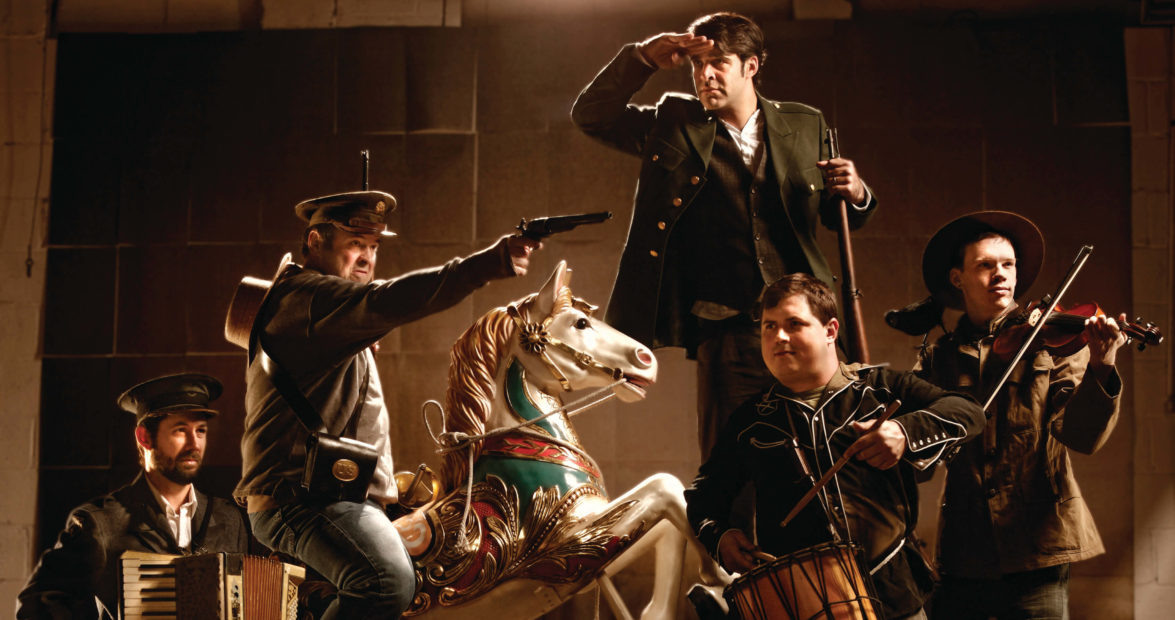 Not only did he sing about it in his last album, Burning In Hell, but he feels that his experience with the music business over the last several years was like being a resident of Satan’s kingdom. “It just physically and mentally crushed me,” Childers says from his Mount Holly home. “I had hoped that I would be able to make a living playing music, but it became pretty apparent to me about 2007 that nothing was going to come out of it. It was kinda hard to accept, but I’m glad I did.”

Childers and his band, the Modern Don Juans, got plenty of critical acclaim, but keeping the band going was a struggle. “A lot of critics liked it, [but that] doesn’t turn into money,” Childers says.

Disillusioned with the business, Childers never lost his love for creating and performing music. Even as he was planning his exit, an ’07 Cleveland gig with Avett Brothers bassist Bob Crawford sitting in provided the impetus for his next musical project, Overmountain Men.

Impressed with Childers’s writing and vocal talents, Crawford stayed in touch throughout the next year, encouraging Childers to keep writing. “Bob was just very persistent with me,” Childers says, “which I don’t think was an easy thing to do at that time and actually got me to believing maybe I could at least write some decent lyrics.”

For the fun of it

While still committed full time to the Avett Brothers, Crawford wanted to flex his creative muscles outside that band. He got Childers to send him lyrics, which he set to music for what would become Overmountain Men’s first release, Glorious Day. Childers’s son and Overmountain Men’s drummer, Robert, was an important part of the mix as well, helping Crawford produce the record, contributing ideas for sound collages, and coming up with the band’s name.
The band is named after the frontiersmen who helped American forces win the battle of King’s Mountain in 1780 and strengthen settlements west of the Appalachians, called overmountain by locals.

“My goal was to blend history and music,” Crawford says. The blend is strengthened by the fact Childers, Robert, and (former MDJ and now OMM guitarist) Randy Saxon have kin who fought in the battle of King’s Mountain and that the album was recorded 20 miles from the monumental rise.

In spite of the album and regular gigs, Crawford and Childers agree Overmountain Men is not a commercial venture. “This project, unlike other projects, needs to be fun all the time,” Crawford says. “The big thing is, it can’t become a grind. We don’t have any time to not be doing something that we purely love and enjoy.”

Childers’s delivery on Glorious Day sounds more relaxed and melodious than his previous efforts. In the MDJ’s, he was a gruff shouter, growling out glimpses of hardscrabble life set to a honky-tonk beat. In the OMM, his vocals are mellower, but he still casts a critical eye on his surroundings.

Sounding like Warren Zevon setting Charles Bukowski’s world-weary outlook on life to music, “Leaving England” reveals his dissatisfaction with the way he was treated in that country: “Leaving England under a cold, blue sky; cold as the tongue of a loveless mother … Behind the dainty gardens, cruel purposes abound.”

But dissatisfaction isn’t the only theme found on Glorious Day. With a Springsteen-like delivery, “Rembrandt” praises the famous Dutch painter who Childers declares a righteous man for his lack of vanity: “He had to borrow for his brushes and his paint, But he kept working until his dying day.”

Crawford stays busy with the Avetts, but he’s committed to the future of this project. “We did it ’cause we love it,” Crawford says. “And that’s why we’ll do another one, because we love hanging out together, have common interests, and we love making music.”

Although he also supports the band wholeheartedly, Childers’s main focus these days is his law practice, where he helps clients get Social Security disability benefits. “Being able to help my fellow human beings out [and] see people when they know they’re going to get their disability when they deserve it rather than starve to death or lose their homes, that’s a hell of a lot more satisfying to me than [anything] an audience or a critic or a radio station could possibly give me,” Childers says.

As proud as he is of his stint with the hell-raising Don Juans, he’s now hit a spiritual place in his life.

“I just try to do what I feel God wants me to do,” Childers says. “If the music’s a part of that, that’s great.”