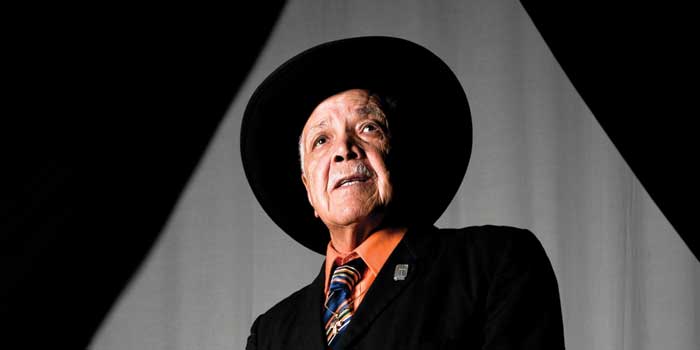 The music business isn’t a meritocracy. But on rare occasions, the mythologized big break just comes a little later than expected. It did for David Lee, a native of Cleveland County who reached his 70th birthday before his accomplishments as a songwriter and record-label owner finally received acclaim.

Overlooked and ignored by the music industry for decades, Lee’s songwriting voice comes through again on the 14-song compilation Said I Had A Vision: Songs and Labels of David Lee, the inaugural release from the nascent Chapel Hill label Paradise of Bachelors. The album compiles Lee’s best work from the 16 records he released out of his Washington Sound record store in Shelby.

From the late 1950s to the early 1980s, Lee’s diverse industry involvement as songwriter, performer, producer, and manager defined his career. The black songwriter refused to play along with the race-based mores of the music industry and culture. In the midst of the Jim Crow South, Lee saw no boundaries separating soul and country, secular and sacred, or black and white.

Lee wrote with an omnivorous and malleable style, drawing from contemporary soul and R&B, gospel, and country with equal disregard for color lines. But no matter who stood behind the microphone or which genre the songs tilted toward, the music stood on a sturdy foundation of melodic finesse, warm harmony, and understated lyrical wit. They were, simply, great pop songs.

Lee began writing music in his teens. R&B legends, such as Marvin Gaye, Otis Redding, and James Brown, inspired him, but country sounds he heard coming through the radio from WSM Nashville also played a part. Lee counts country legend Roy Acuff among his most prominent influences, and you can hear the lilting twang that crept into the music he wrote and performed. But in the old South, country music was the privileged domain of white artists.

“I had a great love for it,” Lee says. “But during that time, I have to admit that a person like me couldn’t break in. Charley Pride broke into it, but you know it was a hard thing. I wouldn’t be accepted by anyone; even my own people wouldn’t accept me.”

Still, while Lee spent his days working at a Shelby country club, his music found some success in the hands of other performers — largely because Lee’s songs were so readily adaptable to different styles.

Lee’s music eventually found its greatest success through Ann Sexton, a soul singer from Greenville, South Carolina. Her renditions of Lee-penned songs “You’re Letting Me Down” and “You’ve Been Gone Too Long” made a splash in the ’70s with some national airplay. But Lee’s music soon drifted into record-collectors obscurity, although the Sexton/Lee collaborations still circulate in Europe on various bootlegged recordings.

Last year, Lee finally got his due with the release of Said I Had A Vision and a November performance at Shelby’s new Don Gibson Theatre. “We had a large, large turnout of a mixed crowd,” Lee says. “People that I had worked for, they were stopping me, shaking my hand, saying, ‘We listen to your music all the time.’ That was joy, joy, joy; praise God for that.”

Said I Had A Vision: Songs & Labels of David Lee by Various Artists. Paradise of Bachelors Records. 2010, 14 tracks, $16 (LP), $10 (iTunes).Available at paradiseofbachelors.com and itunes.com. 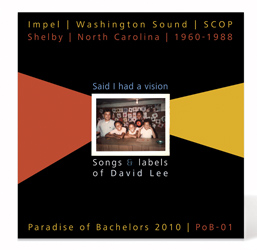 North Carolina isn’t known for rhythm and blues like it is for bluegrass and old-time music. But the artists whose performances — and legacies — are preserved on Said I Had A Vision hold their own next to any of the sounds emanating from Motown or Muscle Shoals. The musical vision and colorblind approach of songwriter and record-label owner David Lee made these recordings possible. The album compiles choice cuts from the 14 45s and two LPs Lee released under the three imprints — Impel, Washington Sound, and SCOP (Soul, Country, Opera, and Pop) — that he operated from his Washington Sound record store in Shelby.

“The Frog,” performed by the salt-and-pepper band The Constellations, is a wild dance tune carried by a surf-guitar lick and bold, soulful horns. Lee’s sole performance on the album, “I’ll Never Get Over Losing You,” is a shuffling “countrypolitan” number that would make Willie Nelson proud.

North Carolina never generated a soul sound as famous as Detroit’s or Philadelphia’s, but Lee continued to push the genre. His long shadow cast across each of these 14 songs makes Said I Had A Vision not only a pleasant remembrance of almost-lost music, but also an important second chance for these songs, which deserve much more attention this time around.

Bryan Reed and John Schacht are the editors of Shuffle Magazine, a quarterly publication devoted to independent music. Their work regularly appears in national and regional publications, including Paste, Blurt, Independent Weekly, and online sites.