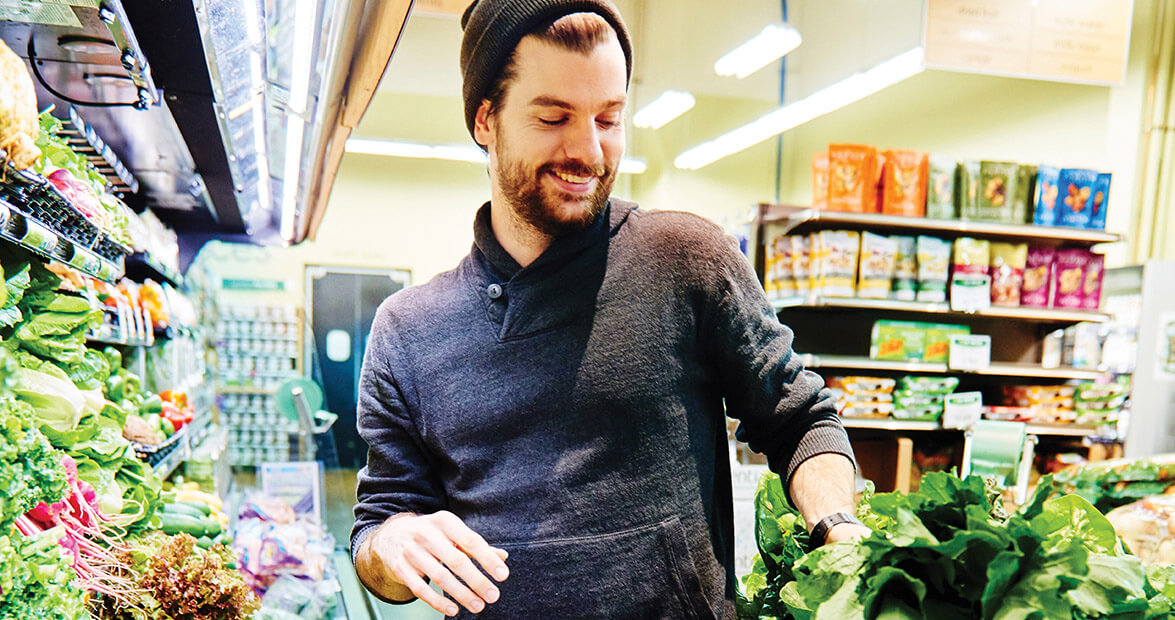 The market’s meats section is a study in “buy local,” too: beef and pork cuts from farmers in Autryville, Chapel Hill, Silk Hope, Siler City, Butner, Asheboro, and beyond.

None of this — the milk, the beef, the ice cream — seemed possible when the market began at Guilford College in the 1960s as a vegetarian buying club. It didn’t even have a storefront in Greensboro until 1976, but as agriculture in the state shifted away from tobacco, the idea of co-ops took off.

Today, Deep Roots fills a wide, booming space that opened in 2013 in a growing corner of downtown Greensboro. “Community owned — everyone welcome,” reads the sign over the doorway. Arrive around lunchtime on a weekday and you may not find a parking space.

It’s a popular model — one in which member-owners share in the profits during surplus years — that counts at least a dozen such organizations across the state, from Weaver Street Market in Carrboro and Chatham Marketplace in Pittsboro to French Broad Food Co-op in Asheville and Tidal Creek Cooperative Food Market in Wilmington. It’s grocery shopping made by North Carolina, bought in North Carolina, and reinvested in North Carolina.

“People are getting to know where their food comes from,” Michael Muller says. A carpenter from Boston, Muller turned to farm life as part of the “back to the land” counterculture movement of the early 1970s. Today, he and his wife, Judy Frank, manage a small herd of grass-fed cattle on about 40 acres in northern Orange County. Their farm is one of many suppliers for Firsthand Foods, a Durham-based operation that connects growers to locally sourced markets like Deep Roots.

Dave Reed, president of Deep Roots’ board of directors, got his first student membership about a decade ago, when he was attending the University of North Carolina at Greensboro. Today, he’s a member-owner and a staunch advocate for sustainable local economies. He works for the Fund for Democratic Communities, a Greensboro-based private foundation. It’s assisting the minority community in northeast Greensboro to install another co-op in a primarily low-income neighborhood.

No doubt there are health benefits to such local fresh markets, but for communities starved for jobs, the gift of commerce may be the greatest boon, Reed says. “Having locally owned enterprises supporting locally owned farmers, and keeping that money in the community, is so incredibly important.”